In his book Paul Kirk’s Championship Barbecue Sauces, Paul Kirk writes, “Barbecue pastes, or wet rubs, are not very common anymore, but they are on the comeback trail. A wet rub is really a combination of a dry rub and a marinade—it’s a paste you apply to your meat before barbecuing.”

I got inspired to try a wet rub with brisket after reading a post by Rick H. on The Virtual Weber Bulletin Board. Rick combined a variety of dry rub ingredients with Worcestershire sauce to make a paste, and I adapted his recipe to come up with what you’ll find below.

The one thing I want you to take away from this topic is that you can make your own wet rub by combining your favorite dry rub ingredients with a flavorful liquid like Worcestershire sauce, orange juice or even a favorite soft drink or beer. Use just enough liquid to achieve the consistency of a paste so that when you apply it to the meat it sticks to the surface.

Here are some pictures I took on July 4-5, 2001 when preparing this brisket.

I bought a whole untrimmed USDA Choice brisket in Cryovac from a local butcher shop. It weighed 11.23 pounds. 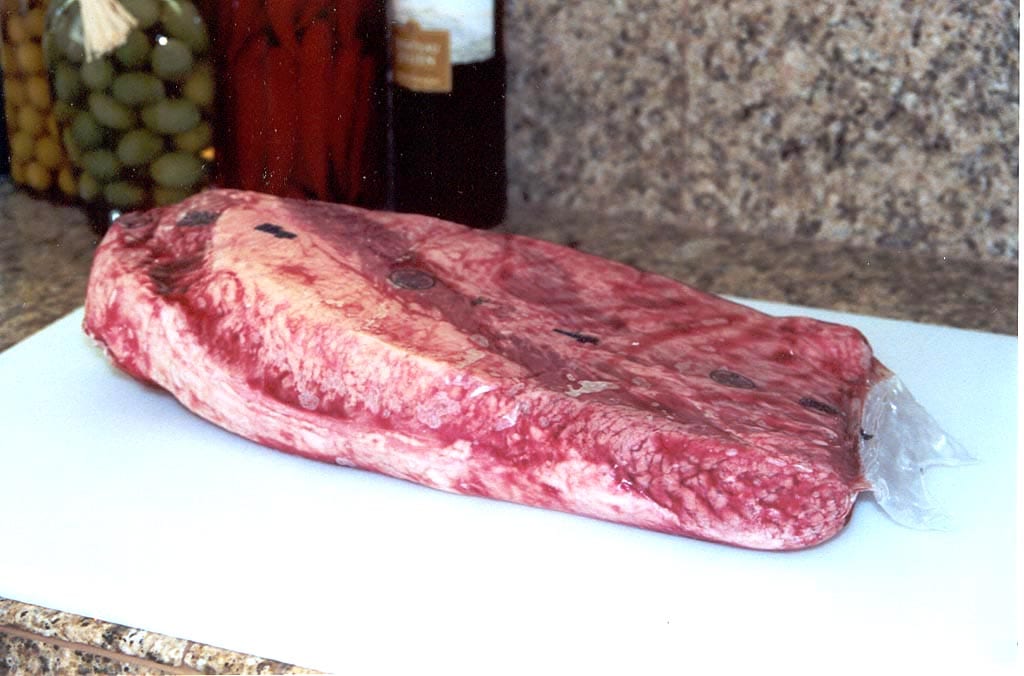 The night before I planned to smoke the brisket, I trimmed the fat side to 1/8″-1/4″ and removed much of the fat around the edges and between the flat and point sections. Just for fun, I weighed the fat—2 pounds exactly. 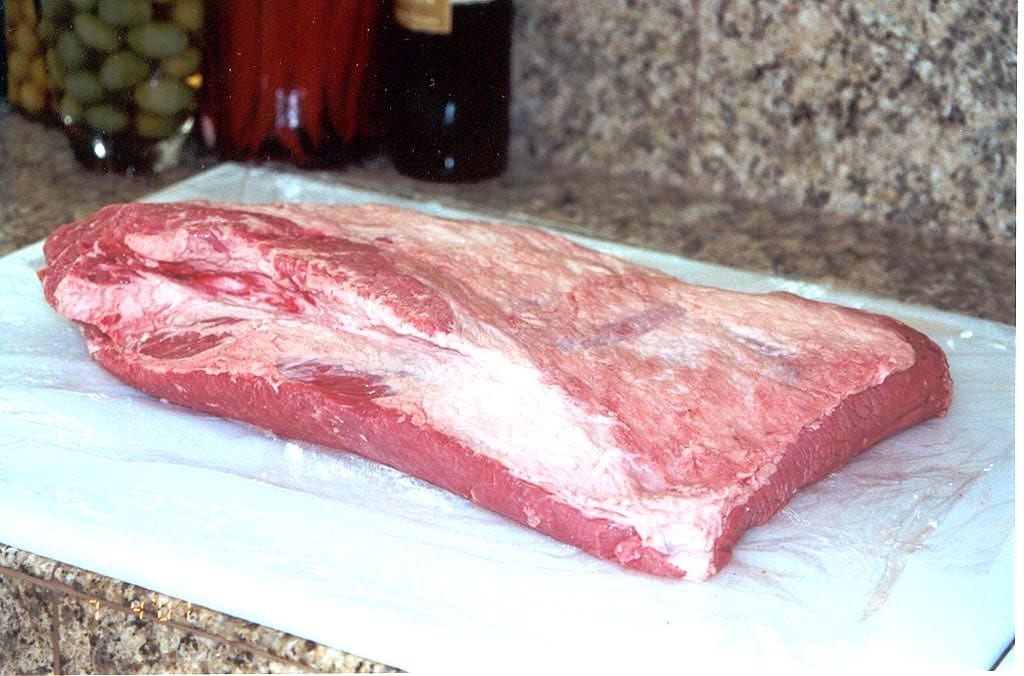 About The Wet Rub 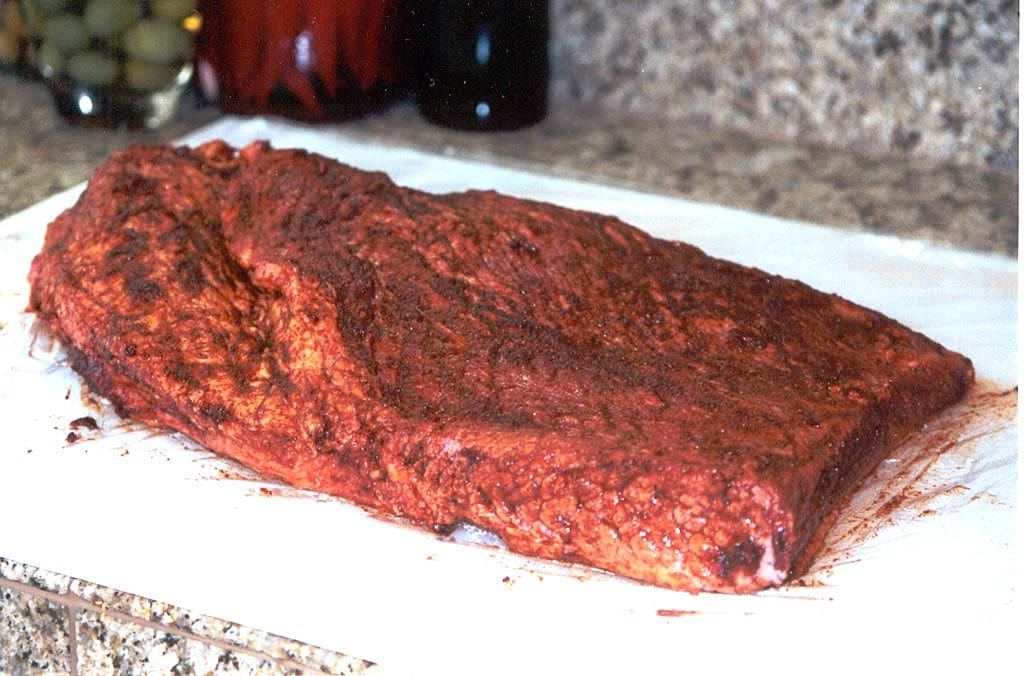 Here’s the recipe I used for the wet rub on this brisket.

Combine all ingredients thoroughly to form a thick paste. The amount of liquid ingredients can be adjusted to achieve the desired consistency. Substitute 3-4 cloves of crushed fresh garlic for the granulated garlic powder, if you like.

Wearing disposable gloves, I massaged the wet rub all over the brisket and placed it in a 2-gallon Ziploc bag for storage in the refrigerator overnight. 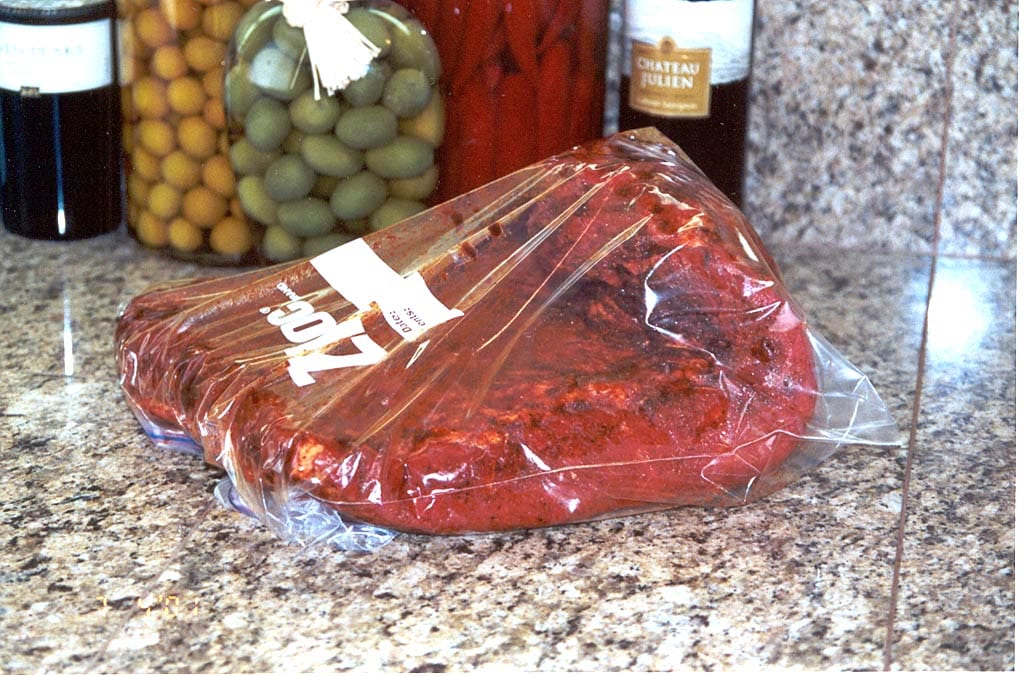 At about 9:00 am the next day, I fired up the cooker using the Minion Method. I filled the charcoal chamber to the top with Kingsford charcoal and added 20 lit briquettes on top that were started in a Weber chimney starter.

For this cook, I used the Brinkmann water pan featured on the Alternative Water Pans page. Given the 2 gallon capacity of this pan, I would not need to refill it during the cook.

I assembled the cooker, filled the pan with hot water, opened all the bottom vents fully and waited for the temperature to come up to 240-250°F.

By 10:00 am the Weber Bullet reached 248°F and I was ready to cook. In the hopes of getting a larger smoke ring, I did not bring the meat to room temperature before putting it in the cooker. I inserted a probe thermometer into the middle of the brisket’s flat section and put it on the top cooking grate with the fat side up. 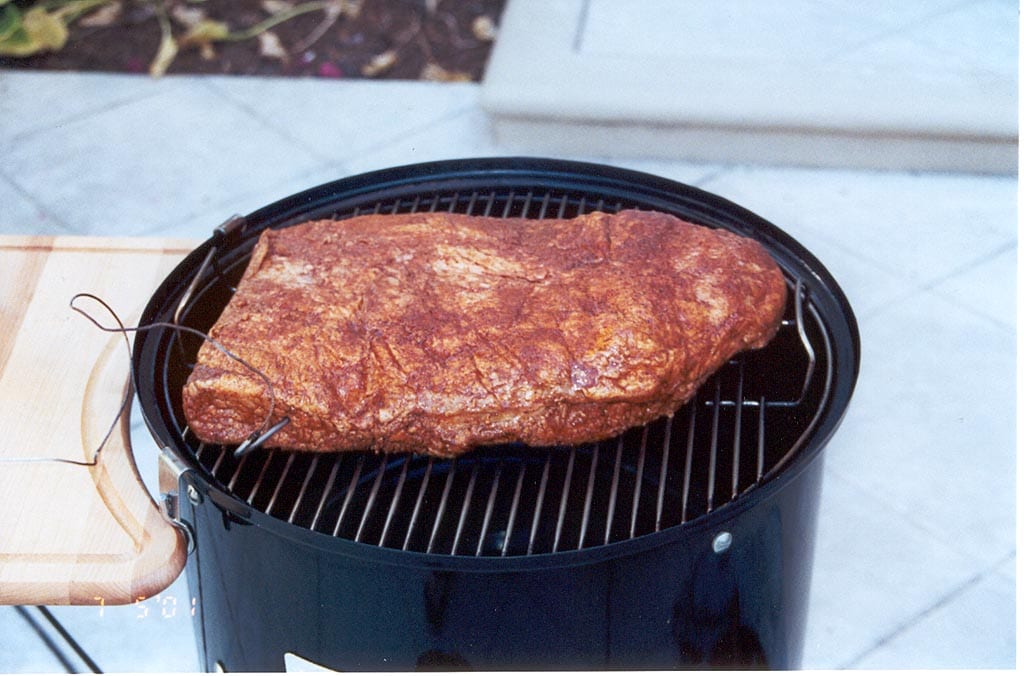 With the meat on, I added 6 cups of small- to medium-sized dry pecan chunks to the charcoal chamber, making sure that some chunks were in contact with burning coals. The deeper Brinkmann water pan made it a bit more difficult to get the chunks into the far side of the chamber, but I got everything situated using a pair of tongs and the brisket was off and running. 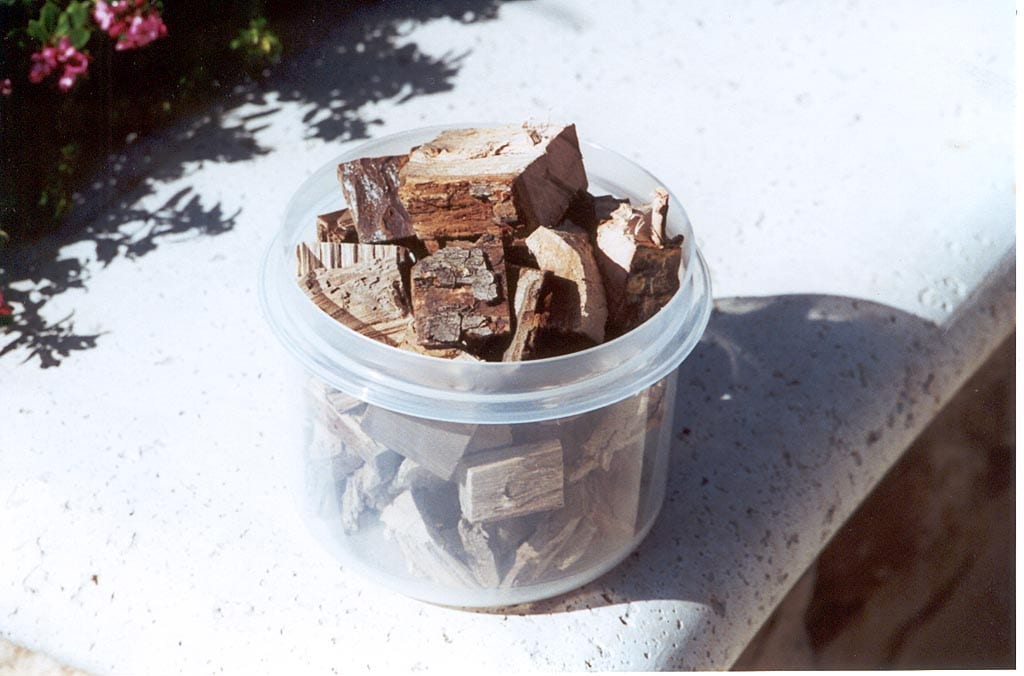 Here’s how the temperature and vent settings went for this 8 hour cook:

I estimated the brisket would spend 8 hours in the smoker and 90 minutes in the oven. At the 4 hour halfway mark, I put 10 ounces of Martinelli’s Premium Apple Juice and 2 ounces of Gentleman Jack whiskey in a spray bottle, basted the meat and turned it over and end-for-end.

At the 6 hour mark I basted the meat again. The brisket reached 170°F two hours earlier than I had planned, so I decided to leave it in the cooker for an additional hour and did not turn it. It rose 2°F during that time and at 5:00pm I removed the brisket from the cooker.

This photo shows how the brisket looked coming out of the cooker. I left the probe thermometer in place and wrapped the brisket in a layer of wide heavy-duty aluminum foil. The brisket went into a 300°F oven on a rimmed baking sheet pan to catch any leaks from the foil package. 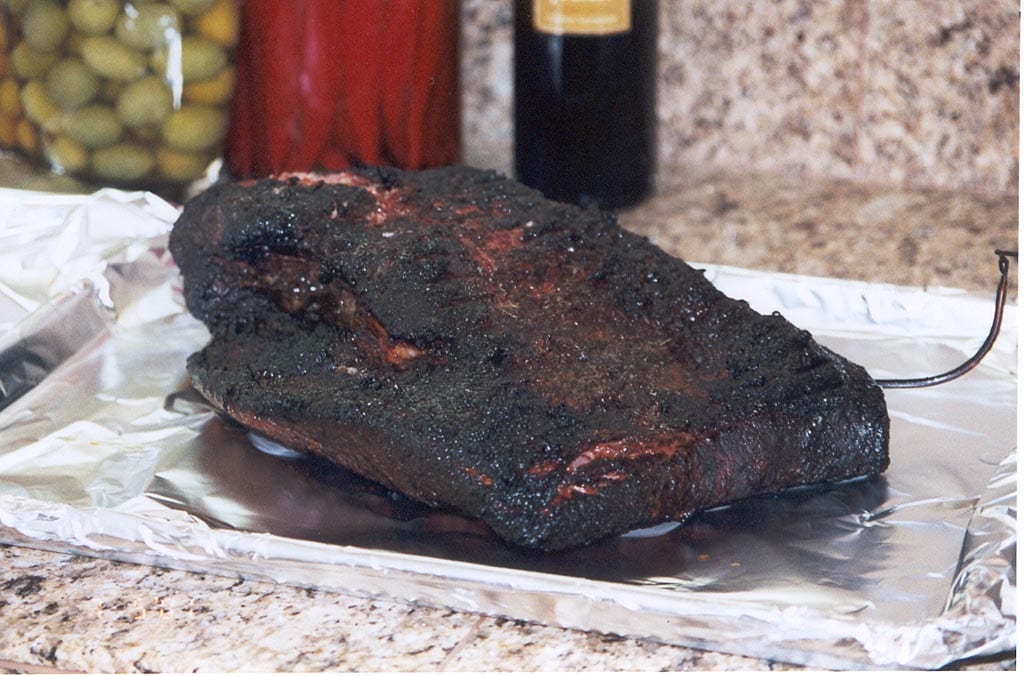 It only took 75 minutes to bring the internal temp to 205°F. I moved the package from the oven to a towel-lined empty cooler where I held the meat until I was ready to cut and serve it. 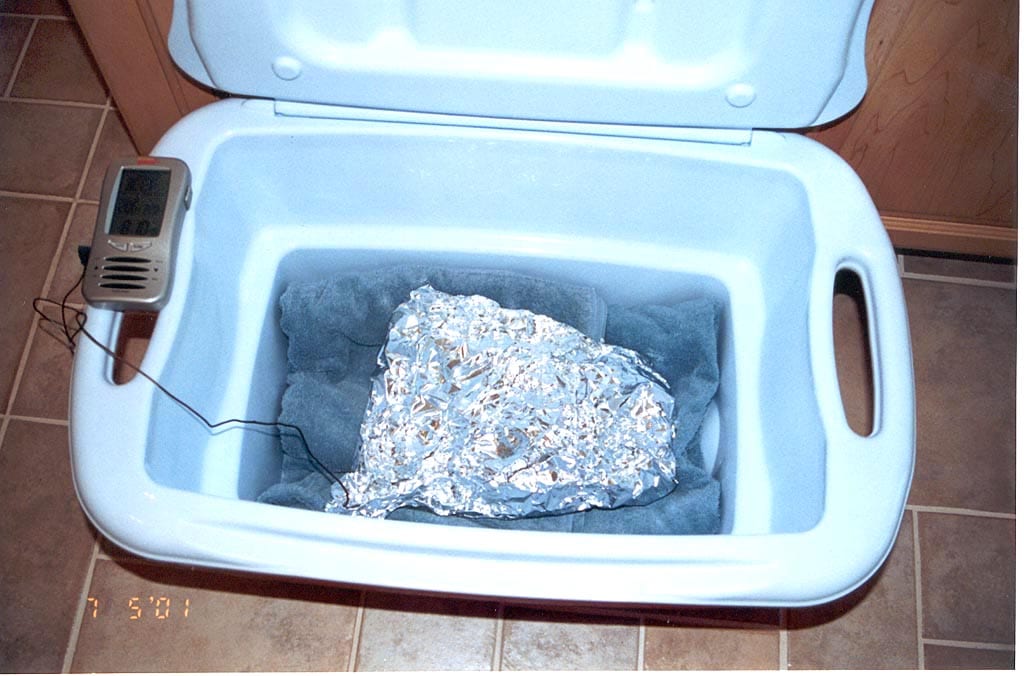 Leaving the probe thermometer in place allows you to monitor the meat temp during this holding time. The cooler keeps the meat well above the 140°F internal temperature required to ensure food safety. Placing towels or crumpled newspaper in the bottom of the cooler will prevent the hot meat from cracking or damaging the cooler lining.

I held the brisket in the cooler for two hours, and in that time the internal temp dropped from 205°F to 173°F. It’s amazing how that cooler keeps the meat so hot!

I started by separating the point section from the flat section. In this picture, the flat is on the left and the point on the right. My favorite part is the flat, so I started with that piece, scraping off most of the excess fat and slicing it across the grain. You can see I got a decent smoke ring, but not a monster one. 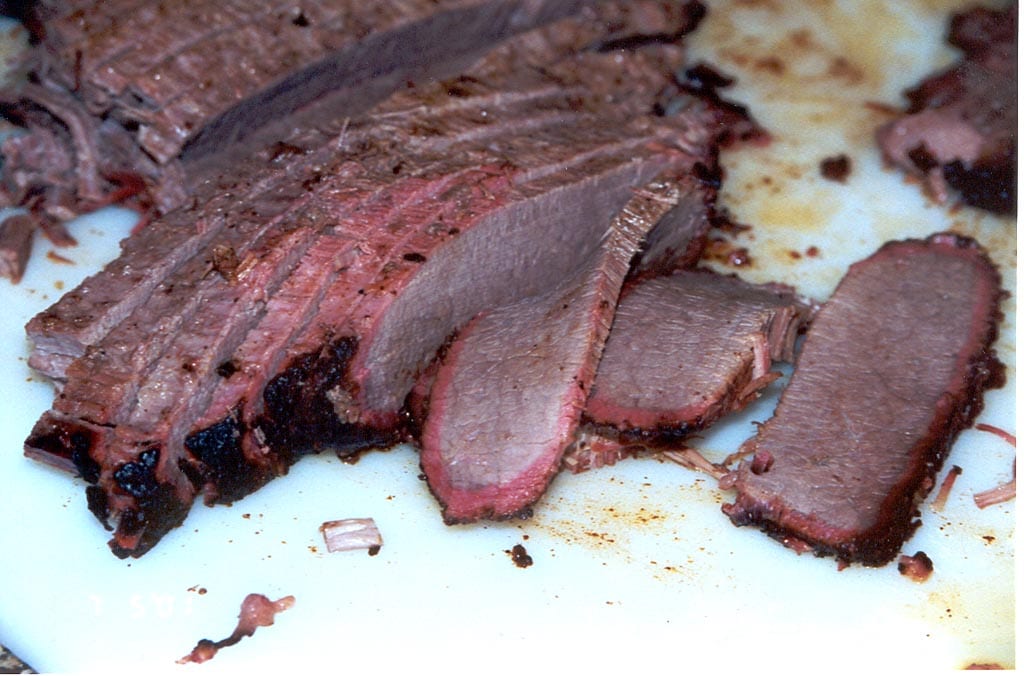 To the shredded meat, I added the leftover cutting board bits from slicing the flat section and some of dried-out edges from the brisket flat. I chopped through the meat a few times with a chef’s knife and ended up with the pile you see in the next photo. This picture shows all the chopped meat I got from this brisket. We ate some of the flat before I took the photo, so what you see here is the leftover portion of the flat. 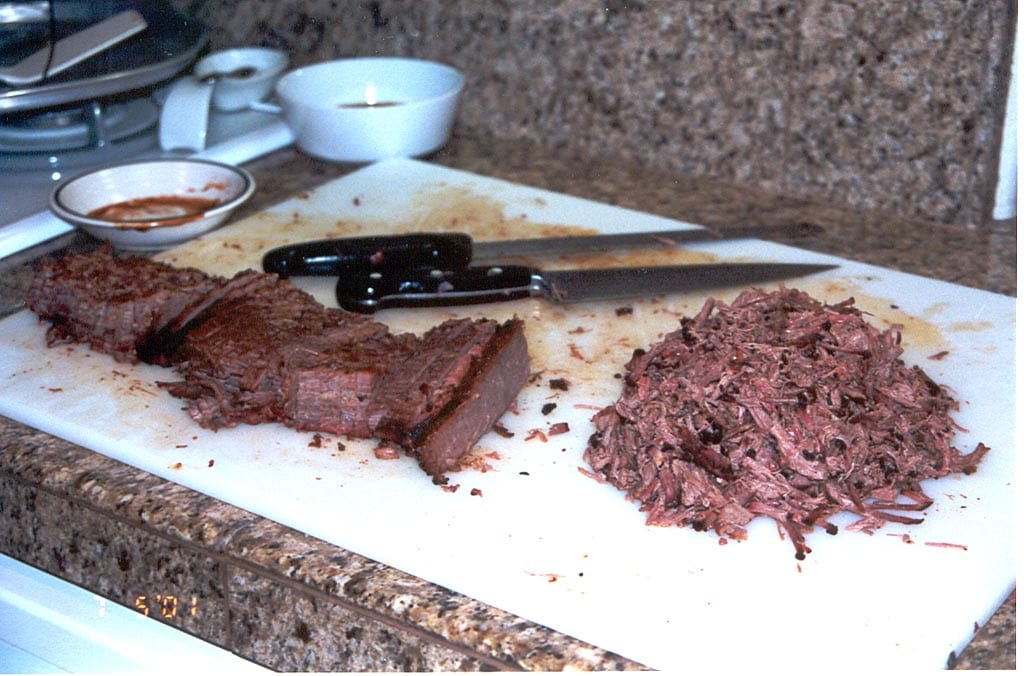 One last thing: the bowl shown in the background of this photo holds the liquid from the bottom of the foil package. Removing the fat renders a tasty juice for drizzling over the sliced brisket flat. There may not be enough liquid to use a fat separator with success, but you can put the liquid in the refrigerator to solidify the fat, then skim it off and reheat the au jus in the microwave.

I noted in my cooking log that the exterior appearance of the brisket was good and the smoke ring was 1/8″. The flat was moist and very tender and had to be cut into thick slices to keep the meat together.

The flavor was quite good, but not noticeably different from a dry rub, in my opinion. The outside meat had a nice spicy flavor, and the burnt ends had a bit of heat to them from the concentrated flavor of the wet rub. I know some people don’t like burnt ends, but I think they’re one of the best parts of a brisket!

I portioned and vacuum packed the leftovers using a FoodSaver and froze them for later enjoyment. 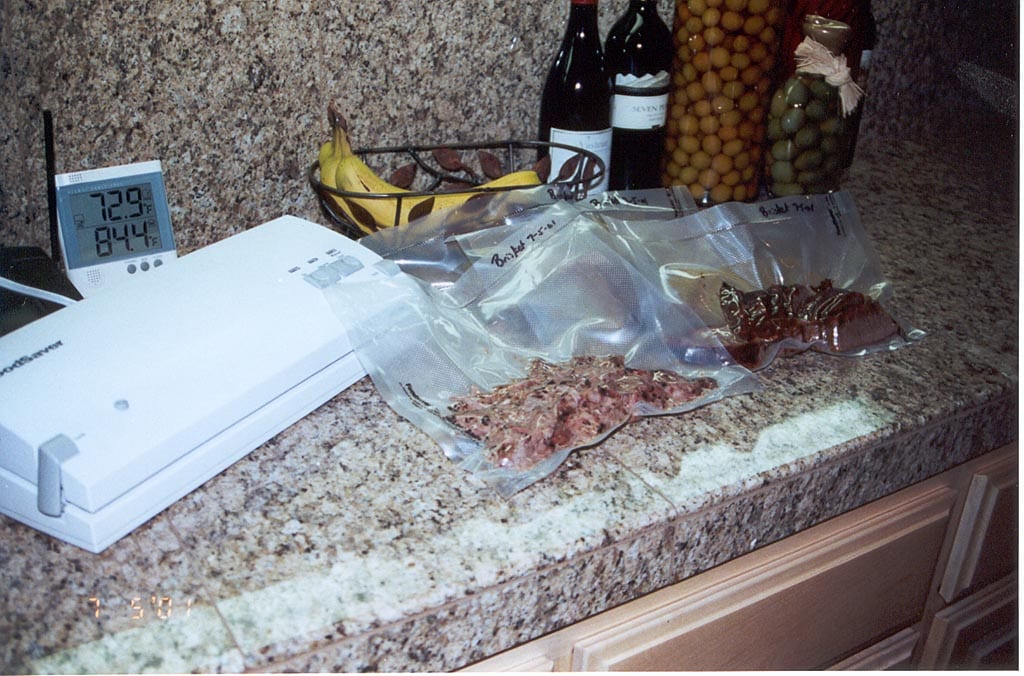 I’ve also included a picture showing the leftover fuel in the cooker. You can see that I could have gone on smoking for several hours with the remaining charcoal—thanks to the Minion Method! 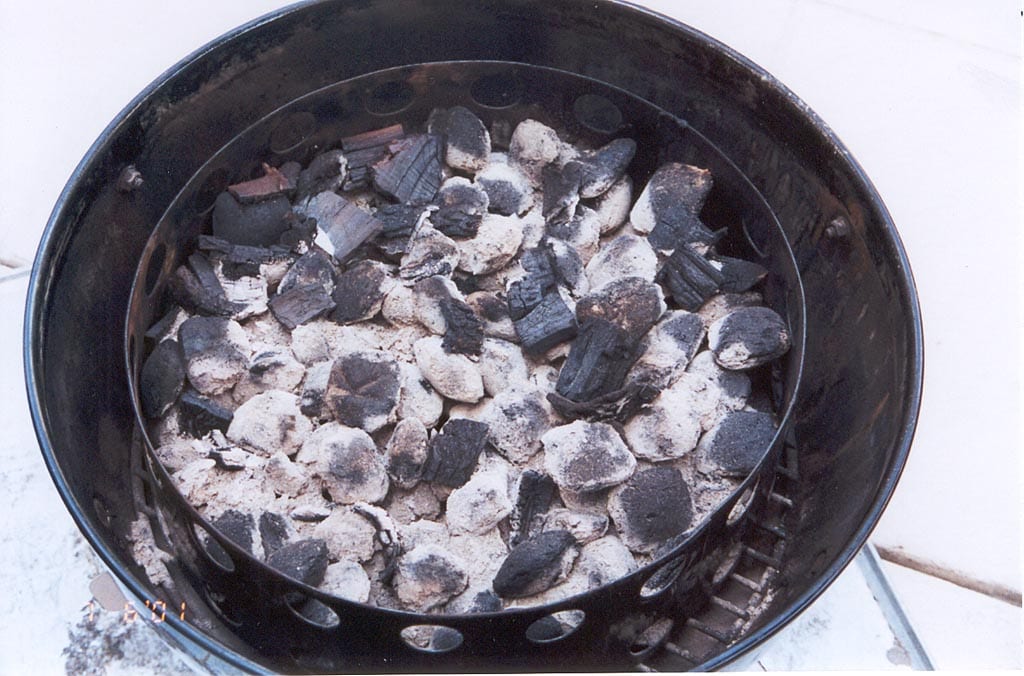 It’s now January 2014—about 12 years after I cooked this brisket—and I’ve got a lot more brisket experience under my belt. Here are a few thoughts as I look back at this article.