This 49-minute video demonstrates in real time, with no fast forwarding, how I separated a 17+ pound USDA Prime brisket into flat and point sections.

Warning: I am not a professional butcher and I don’t pretend to be one in this video! I could do the job faster if I wasn’t talking to the camera, but let’s be honest, I wouldn’t be that quick even if there wasn’t a camera. You’ll notice my cuts are sometimes shallow, tentative…that’s because I don’t do this very often, I’m just a backyard barbecuer like most of you trying to do the best I can.

So watch, learn, laugh, and enjoy.

Do You Know The Difference Between A Brisket Flat And A Brisket Point?

You may have landed on this article without a good understanding of what a brisket is or the two major muscles that comprise a brisket, much less why anyone would want to separate a brisket into flat and point sections. If this describes you, please grab a cup of coffee, find yourself a comfy chair, and read the long but informative Brisket Selection & Preparation article.

Why Separate The Brisket Flat And Point? 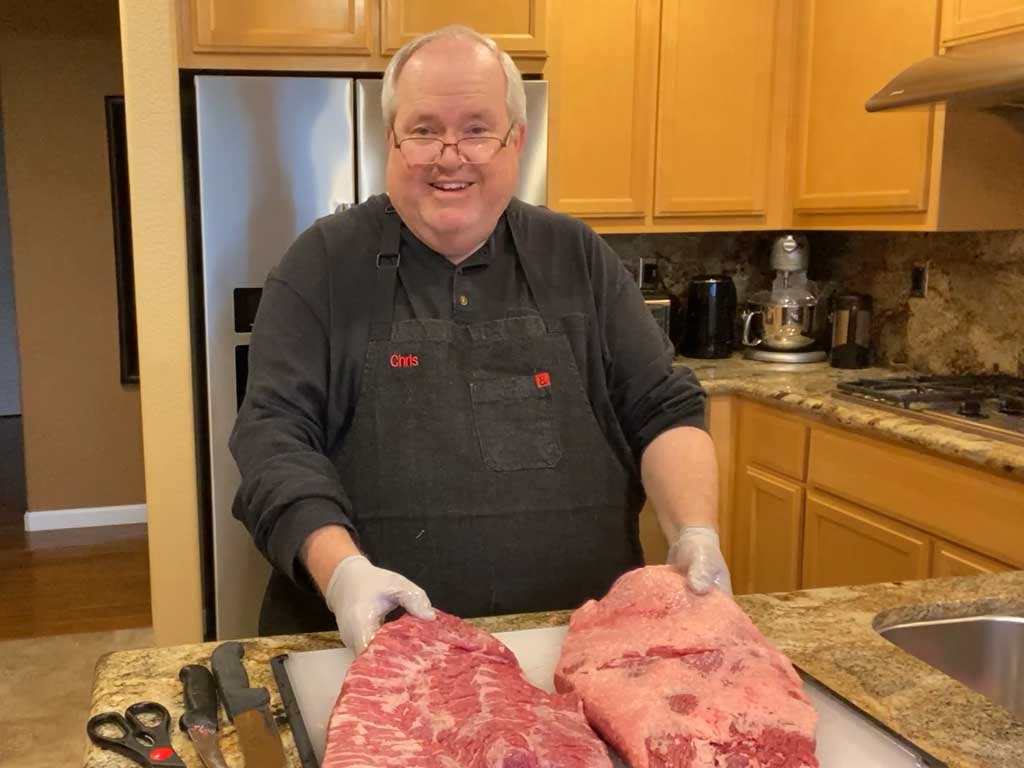 It’s not common for people to separate the flat from the point when barbecuing a brisket. Most of the time, we trim and cook the brisket whole, with both portions still connected. We do this because a) it’s more efficient to cook them together as a single piece than in two separate pieces and cutting in half our pit’s cooking capacity; and b) the super-fatty point protects the lean flat during cooking, preventing it from drying out too much.

We only separate the flat from the point after cooking in order to slice the flat and shred or make burnt ends from the point. But even after cooking, there are those among us who don’t separate point from flat. Down in Texas, a brisket is often sliced starting from the end of the flat until reaching the point, then the brisket is turned 90° and the remainder of the flat and point is sliced, a technique known as the “Texas Turn”.

So what exactly am I up to here? Why am I separating a brisket into flat and point before cooking?

Well, it’s Christmas 2020 and we’re giving the Weber Smokey Mountain Cooker the holiday off. Instead of barbecued brisket, we’re having oven braised brisket flat, a Christmas dinner tradition in my wife’s family that goes back further than anyone can remember. I bought a 17+ pound USDA Prime whole brisket at Costco, but for this meal we only need the flat portion—the point portion is not invited to the party. After separating the flat from the point, the point gets trimmed, vacuum sealed, frozen, and barbecued it in the WSM at a future date. 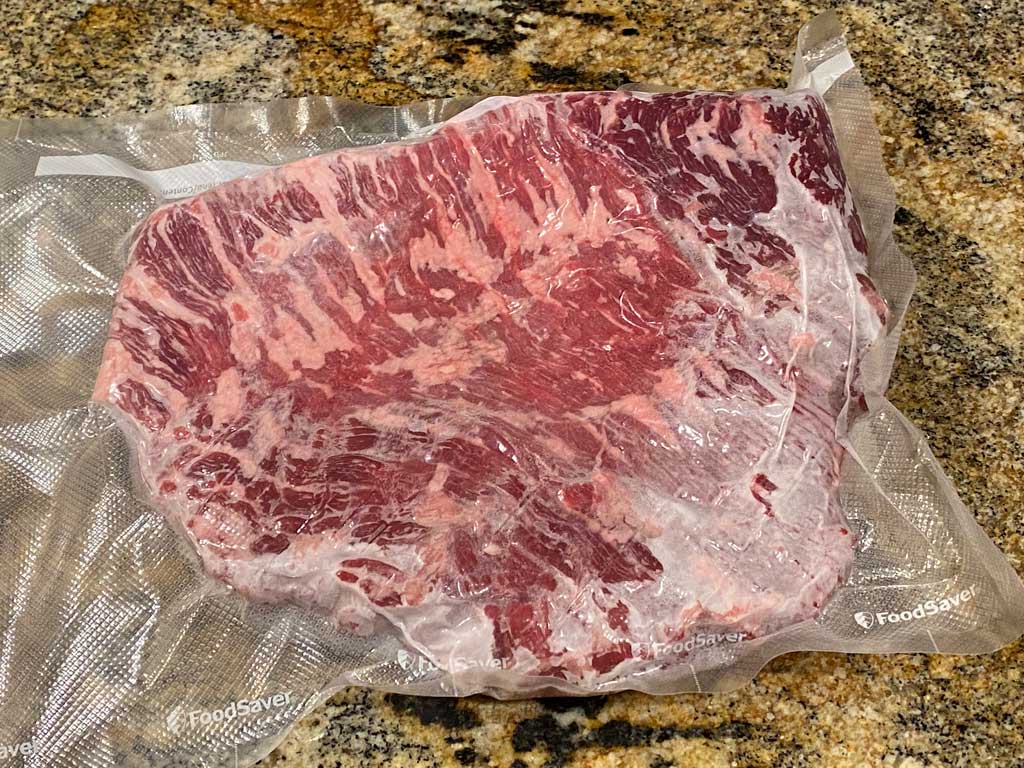 And this is what we did with it for Christmas dinner. 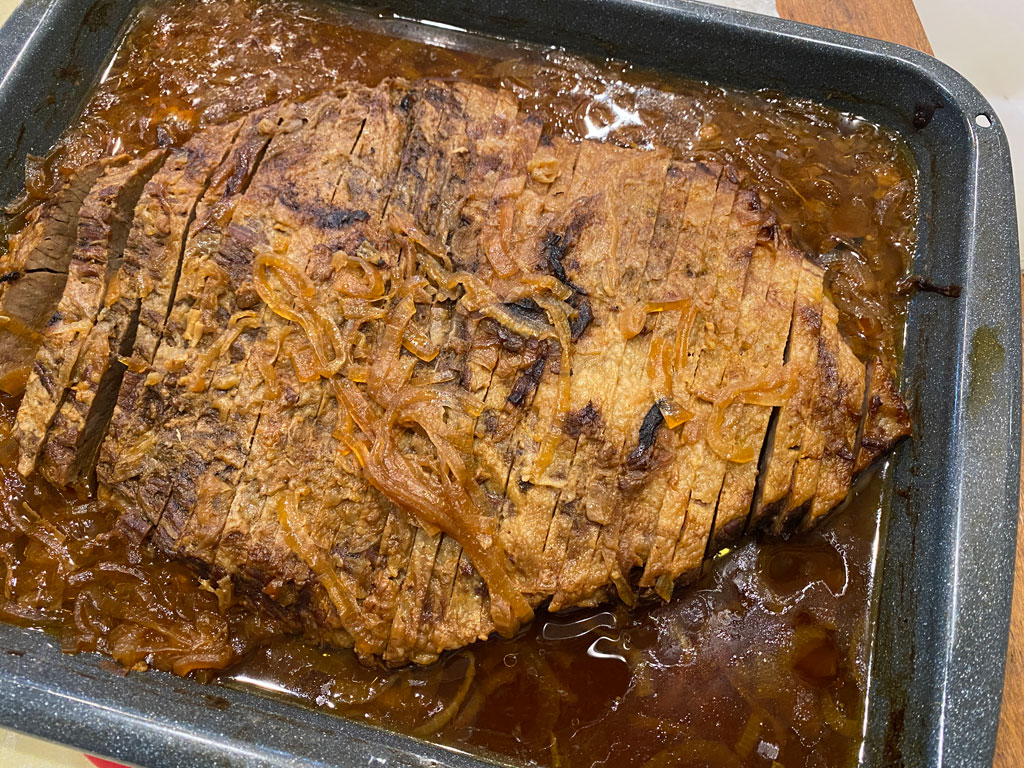 Not barbecue, but delicious! Again, you’ll find the recipe for oven braised brisket flat posted at The Virtual Weber Bulletin Board.

Besides braised brisket, other reasons for breaking down a whole brisket into flat and point is to use just the leaner flat portion for dry-curing pastrami or in soup and stew recipes.