On September 1-2, 2000 I attempted my first nighttime brisket cook on the WSM. The prep began the afternoon of September 1 and the cooking started after midnight on September 2. Overnight cooking works well with brisket, since you can time things so that the meat is finished around the time you want to serve it for lunch…or maybe even breakfast! 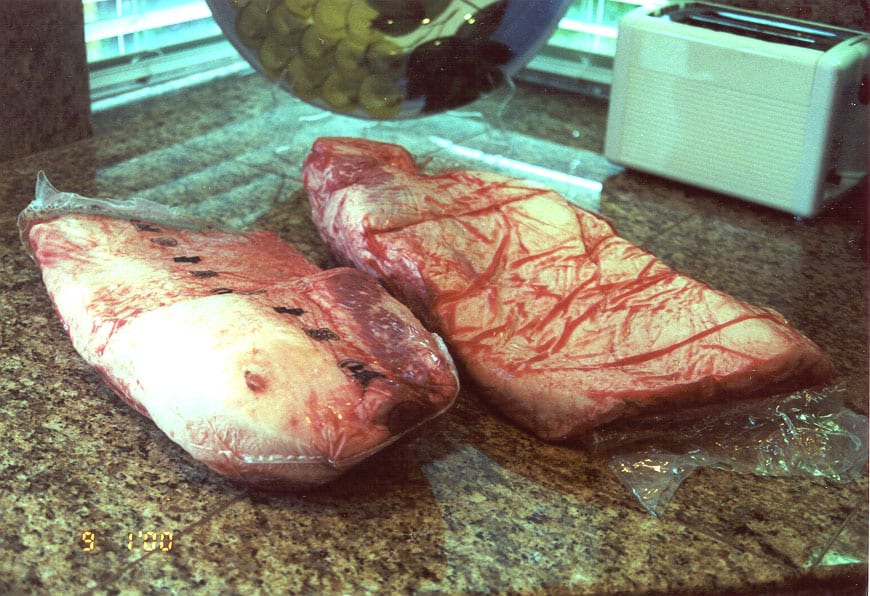 At 4:30 pm on September 1, I prepped both briskets identically. I cut away the thick fat around the edges; removed some, but not all, of the fat between the flat and point sections; and trimmed the fat side, leaving a 1/8″-1/4″ layer of fat.

Mixing And Applying The Rub 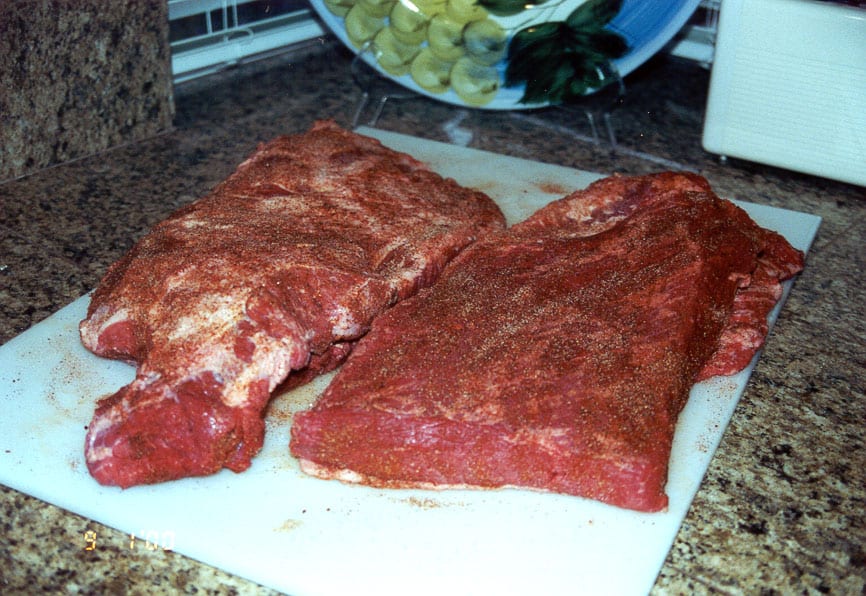 Each rubbed brisket was folded over on itself and stuffed into a 2-gallon Ziploc bag. The briskets stayed in the refrigerator until going into the cooker; I did not bring them to room temperature first, hoping to get a better smoke ring as a result. 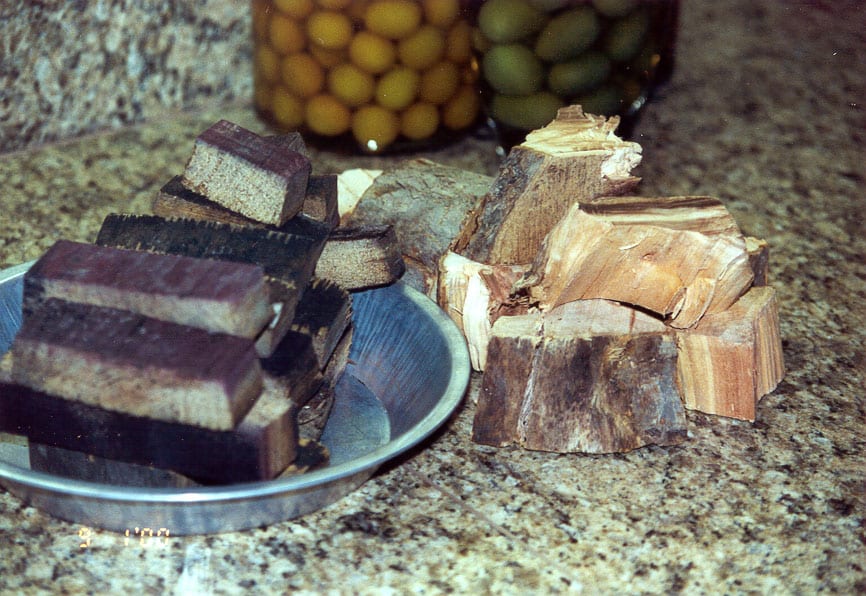 I used oak wine barrel chunks and apple wood chunks as my smoke wood for these briskets. If you’ve visited a winery and can remember the smell of the cellars where the wine is stored, that’s exactly what these oak chunks smelled like.

I wanted to apply quite a bit of smoke to the meat, so I selected the largest chunks I had to get the equivalent of six fist-sized chunks of wood, half oak and half apple. I did not soak the chunks before using them. 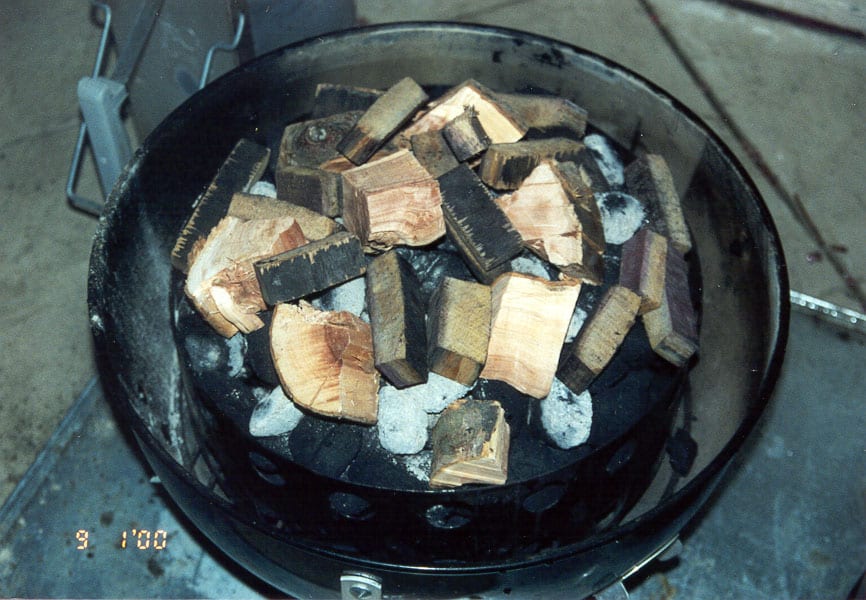 Since I would be cooking for over 12 hours, I fired up the WSM using the Minion Method. By 11:40 pm, I filled the charcoal chamber all the way to the top with Kingsford Charcoal Briquets and used a Weber chimney starter to light 20 briquettes which I distributed over the unlit briquettes. I placed all the smoke wood chunks on top of the lit briquettes, assembled the cooker, and added one gallon of hot water to the water pan. All the vents were fully open as I waited for the cooker temperature to rise.

After Midnight, We’re Gonna Let It All Hang Out 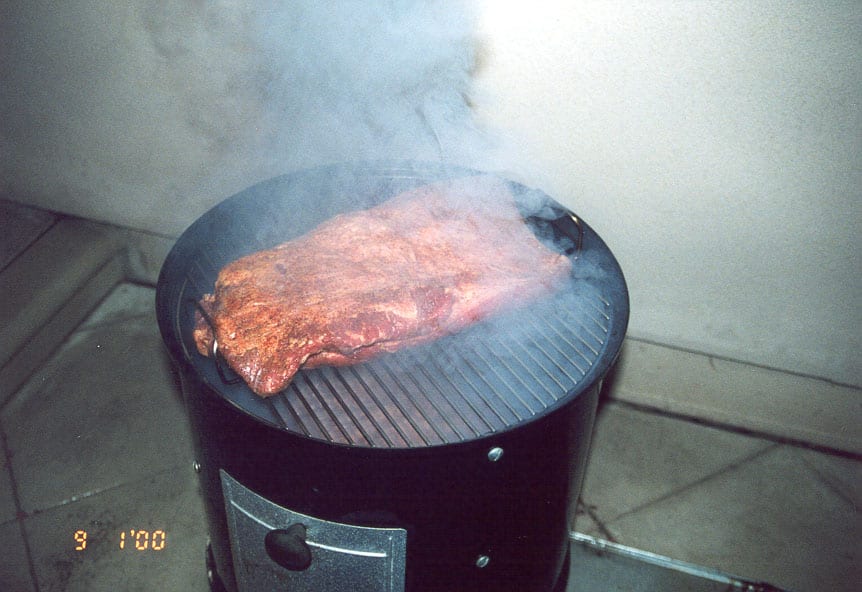 It was 60°F outside with a slight drizzle. I was shooting for 250° before putting the meat in the cooker, but by 12:30 am it had only crept up to 235°F. I decided to go ahead and get started, putting one brisket on the lower grate and the other on the upper grate, both with the fat side up.

Much of what looks like smoke coming out of the cooker in this picture is actually steam, due to the cold outdoor temperature.

Time To Catch Some Shuteye

I monitored the cooker temperature from 12:30-3:30 am, dozing off between checks. At 1:40 am the cooker reached 240°F and I reduced all three bottom vents to 50 percent. The top vent remained fully open throughout the entire cooking session. At 3:30 am it was clear that the cooker temp was stable, so I added some hot water to the pan and went to bed.

My target temperature range for the WSM was 225-250°F. My plan for the briskets was to cook them for 1 to 1-1/2 hours per pound (after trimming fat) until the meat registered an internal temp of 185°F and was fork tender.

Basting And Turning The Briskets

I got up at 6:30 am to turn the meat for the first time, and I basted it on all sides with Martinelli’s Premium Apple Juice applied with a spray bottle. I also added hot water to the pan. The cooker was hanging in there at 245°F. 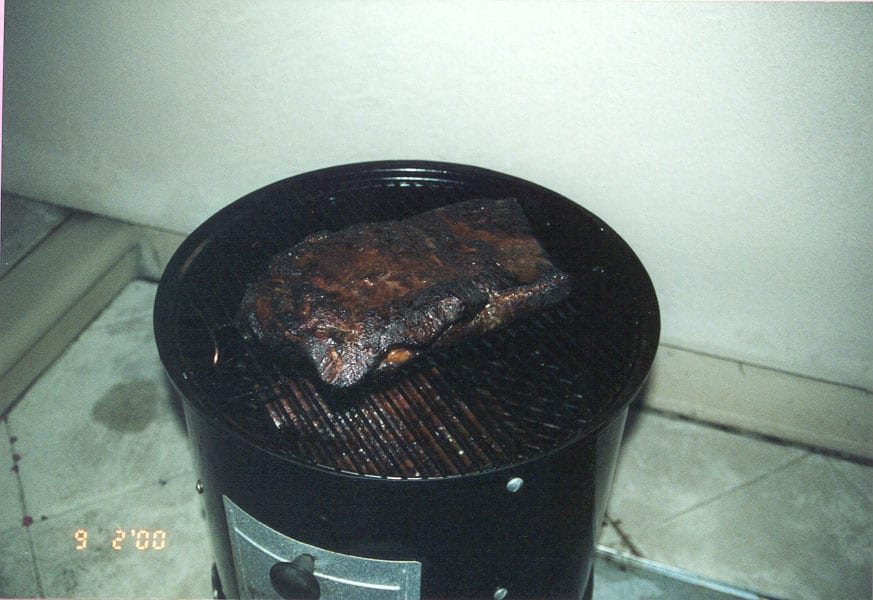 I went back to bed and slept until 9:30 am, then turned and basted the meat again and replenished the pan with hot water. The cooker was at 228°F, so I opened the bottom vents a bit. 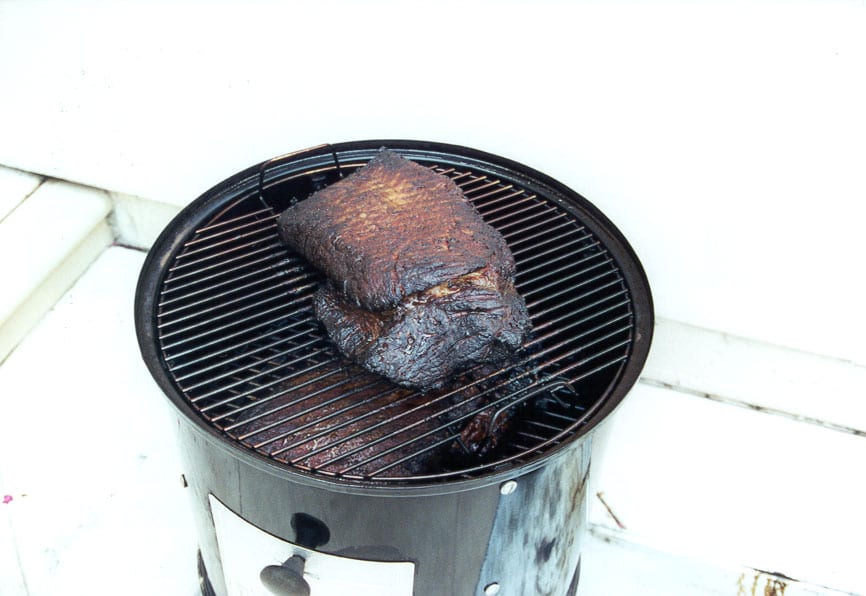 At 10:30 am I stirred the coals gently to rejuvenate them. Actually, it was more of a gentle tapping on the coals and the charcoal grate to get some of the ash to fall through the grate, while trying not to stir up a lot of ash into the air. The cooker temp fluctuated between 225-235°F from 10:30 am to 12:30 pm.

Just to be sure that I wouldn’t run out of fuel, I lit 20 briquettes in a Weber chimney starter and added them at 12:00 pm. The cooker temperature began to come up a bit and I repeated the tapping of the coals and charcoal grate again at 12:30 pm.

Briskets Ready For A Late Lunch 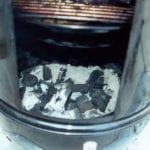 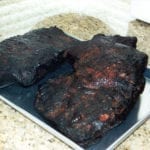 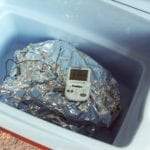 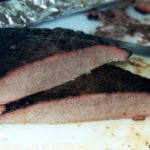 At 1:15 pm the cooker was at 248°F and the brisket registered an internal temp 185°F, so I removed them from the cooker. I figure this came out pretty close to 1-1/2 hours of cook time per pound.

The first photo above shows how the fuel looked at the end of the cook. The second photo shows how the briskets looked coming out of the cooker. They had that dark exterior meat that is so characteristic of good brisket. They looked and smelled absolutely delicious!

I wrapped each brisket in foil and kept them warm in an empty cooler until I was ready to serve them. The probe thermometer showed that the internal temp of the first brisket was 165°F when I cut into it at 2:30 pm, and 140°F for the second brisket at 4:30 pm.

I separated the flat and point sections and scraped off all the fat that I could from each section. The last photo above shows the 1/8-1/4″ bright pink smoke ring in the flat section. I sliced the flat across the grain and chopped the point for sandwiches. Leftovers were portioned into FoodSaver vacuum bags and frozen for later enjoyment.

My cooking log noted the dark exterior color and juicy appearance of the meat. It was very tender and had good moisture. The smoke flavor was good, but the rub could have been a little more spicy for my taste. Maybe a little cayenne would have helped.

Two things I want to mention before wrapping up this article. First, I didn’t notice any difference in taste or tenderness between the two briskets. I’m not criticizing the CAB brisket; I just know some people will wonder if I could tell a difference, and I couldn’t. I might have been disappointed if the CAB had cost more per pound, but it didn’t, and I was happy with the way they both turned out.

The other thing I learned from doing this all-night cook was that I should have put the meat in the cooker 3-4 hours before I wanted to go to bed. If I had put the meat on at 10:00 pm, the cooker temp would have stabilized by 1:00 am and I could have gone to bed earlier. Of course, the briskets would have finished earlier, too, but I could have just kept them warm longer in an empty cooler until serving time.

I hope this topic inspires you to try an overnight brisket cook if you haven’t done one. The unique qualities of the Weber Bullet, combined with the Minion Method for firing the cooker, give you the ability to cook overnight with confidence, while still getting a decent night’s sleep—something you just can’t do with any other bullet-type water smoker.

It’s now January 2014—about 13 years after I cooked these briskets—and I’ve got a lot more brisket experience under my belt. Here are a few thoughts as I look back at this article.