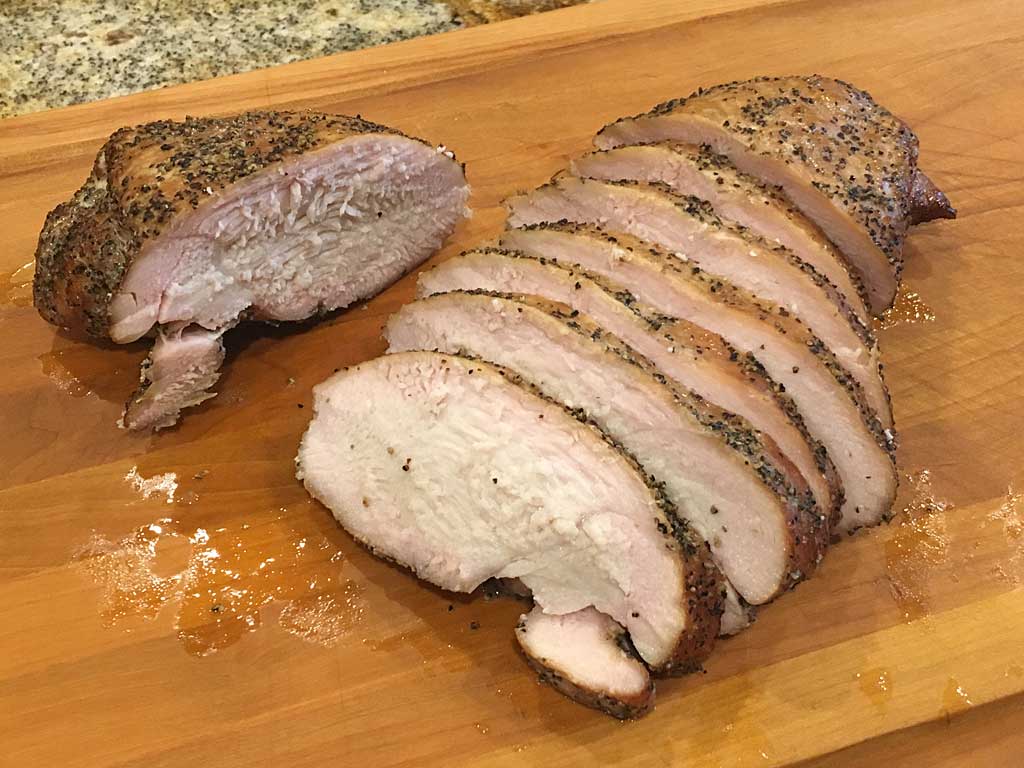 “We’re not exactly known for our turkey,” writes Franklin in his best-selling book Franklin Barbecue: A Meat-Smoking Manifesto, “but it does come out real nice, and I even know some people for whom it’s the favorite of all of the things we cook.” Turkey breast is also the easiest thing they cook at the restaurant, says Franklin. “We get nice, plump turkey breasts and try to keep them moist. It’s important to buy turkey breasts that have not been prebrined or injected with any sort of solution.” Franklin wants you to taste the flavor of the meat, the rub, and the post oak, not a commercially brined flavor.

I had the pleasure of eating Franklin’s smoked turkey breast when I visited his restaurant in October 2015 and it was moist and delicious. I thought it would be fun to adapt his recipe to the Weber Smokey Mountain Cooker, so I gave it a try on March 1, 2017 with 4 breast portions.

If you buy a boneless, skinless turkey breast that’s been tied or netted by a butcher, as shown below, ask if it’s a single or double (whole) turkey breast. If it weighs 3-4 pounds or more, it’s probably a whole breast. When you get it home, remove the string or netting, and if it’s a whole breast, split it into individual breast portions. 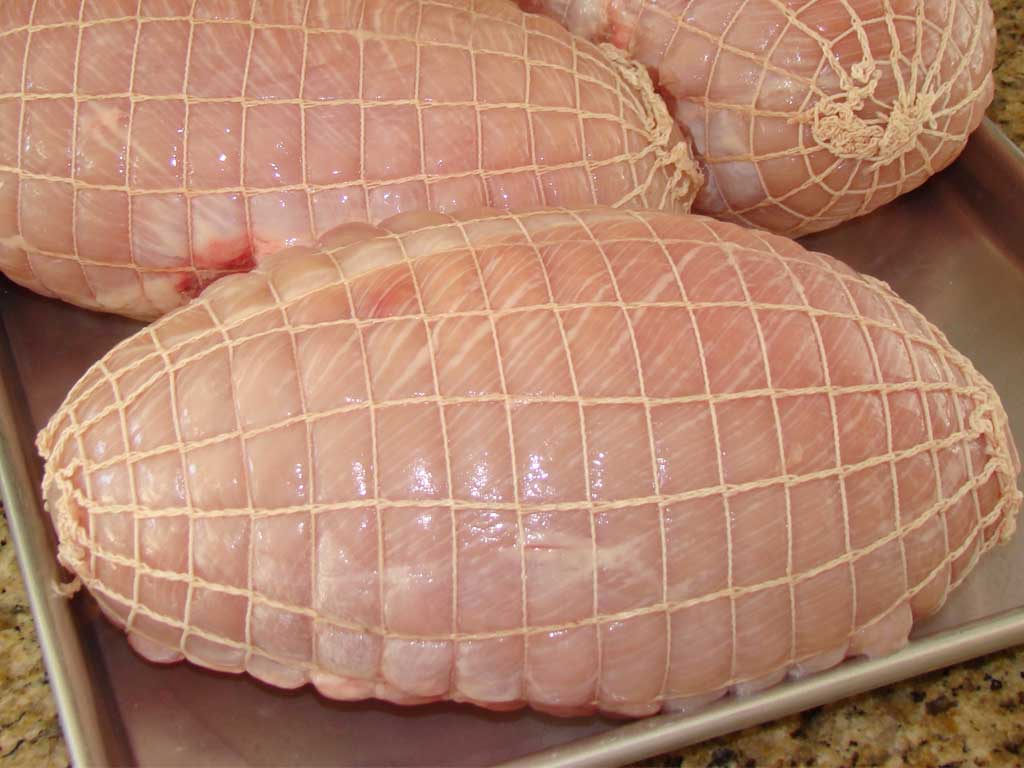 If you plan on buying a whole, bone-in turkey breast and butchering it into boneless, skinless breasts, like the frozen one shown in the next photo, it’s probably been injected with a solution and is the kind of turkey breast Franklin would avoid. However, it may be the only affordable option for you, depending on where you live. When buying a whole, bone-in breast, buy the biggest one you can find at the supermarket. There’s a lot of waste from skin and bones, and in the case of the one shown here, it included a liquid gravy packet that I discarded. 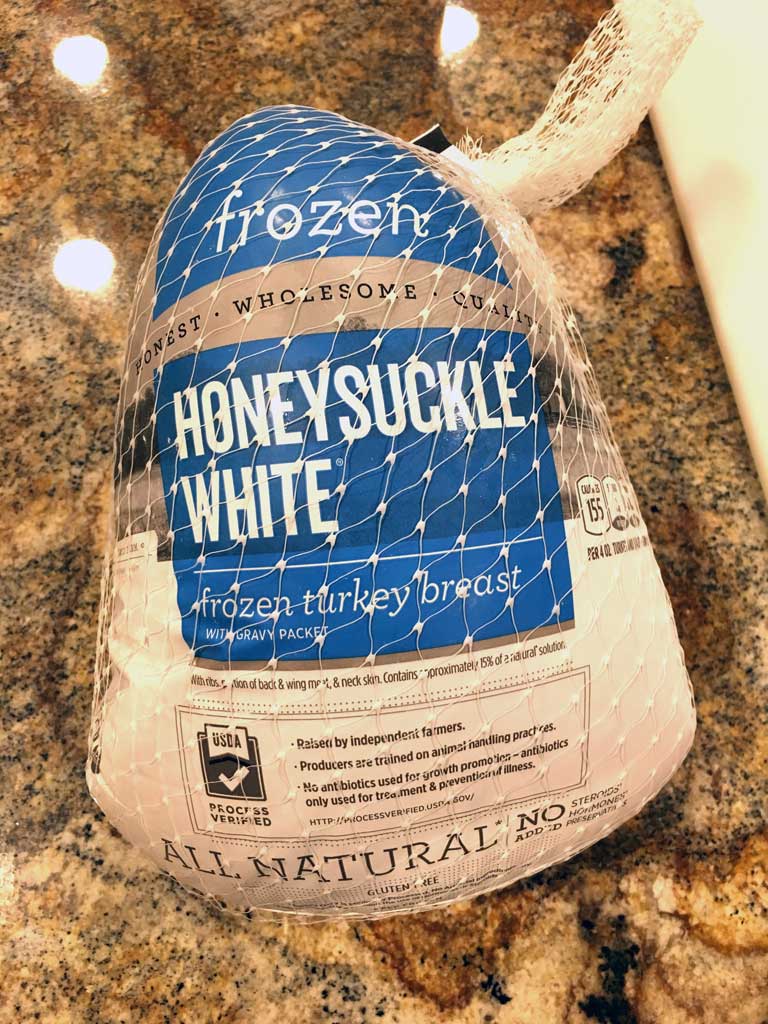 To butcher a whole, bone-in turkey breast, start by removing the skin. 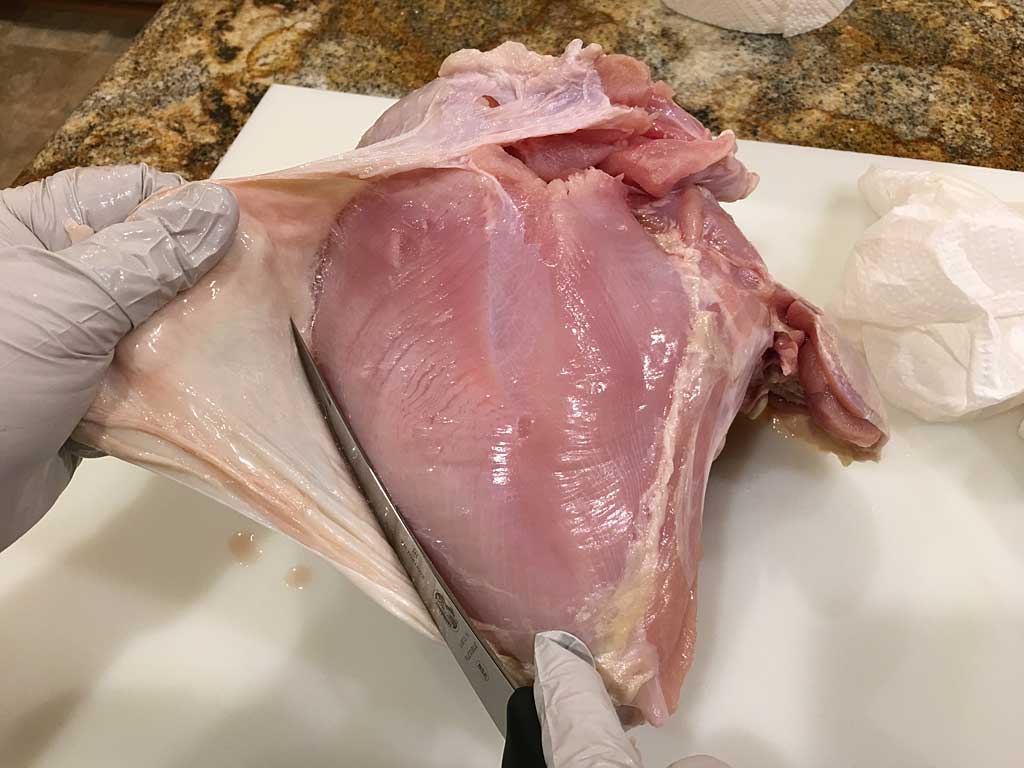 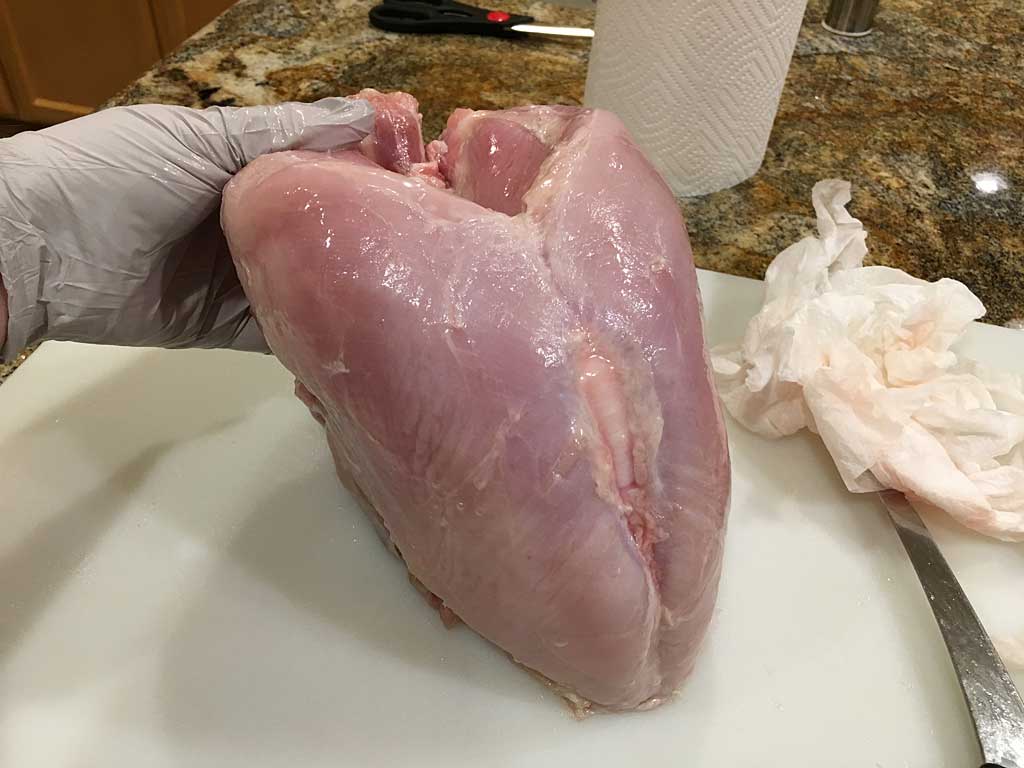 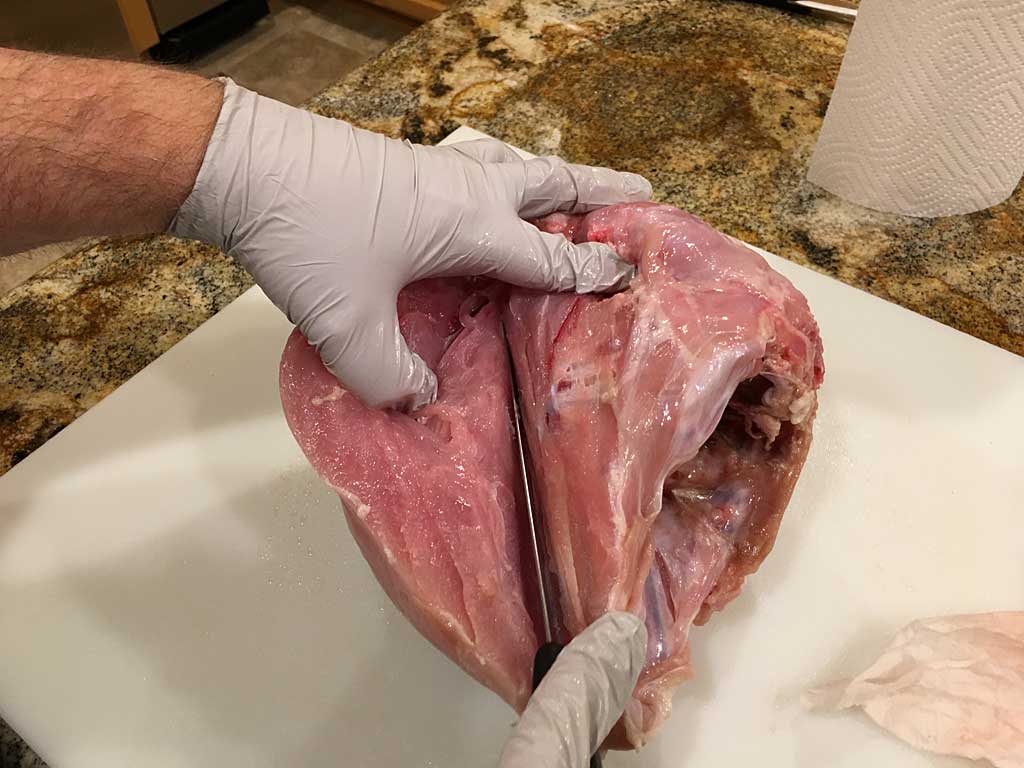 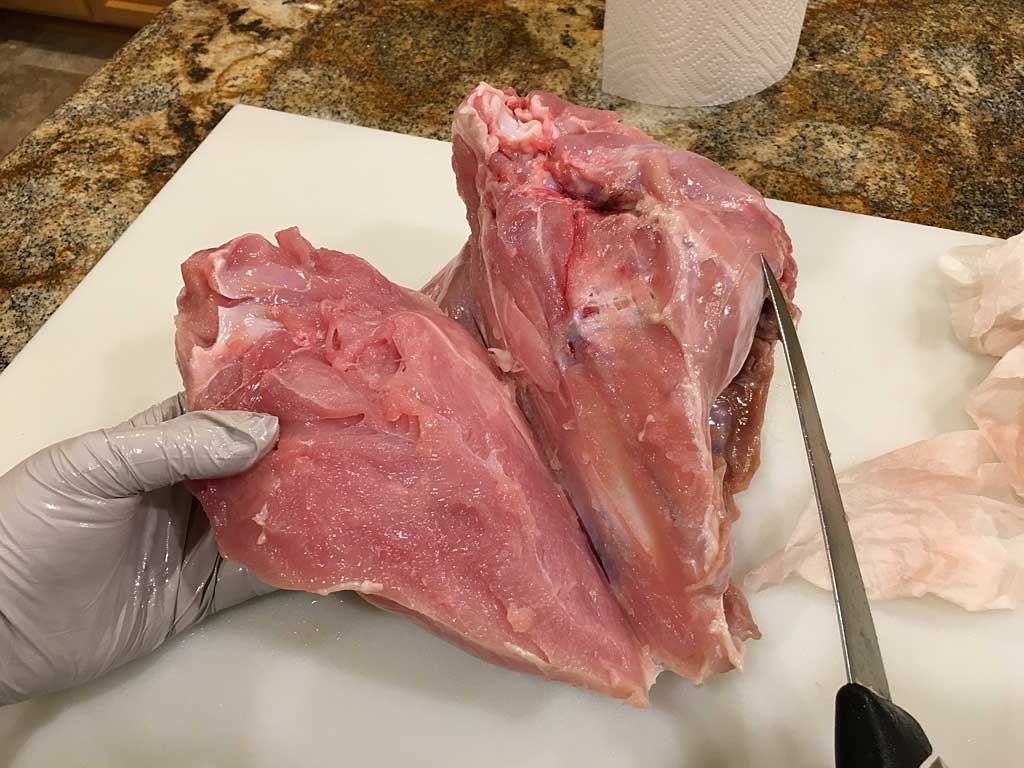 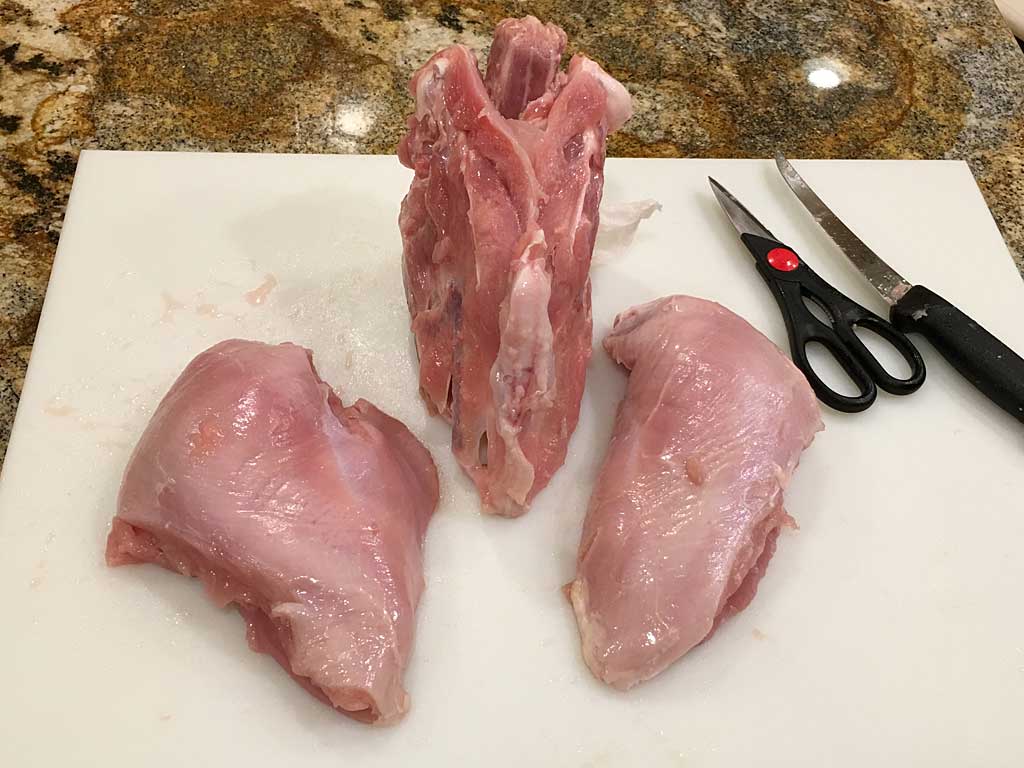 I supplemented these with two more boneless, skinless turkey breasts that I purchased at the supermarket. These additional breasts weighed almost 2 pounds each.

In the tradition of Central Texas barbecue, Franklin’s turkey rub couldn’t be simpler: 2 parts 16-mesh ground black pepper to 1 part Morton Kosher Salt. Franklin is particular about his salt and pepper. He prefers Morton Kosher Salt because of the uniform size of the flakes, and he likes the size of 16-mesh ground black pepper relative to the size of the kosher salt flakes. 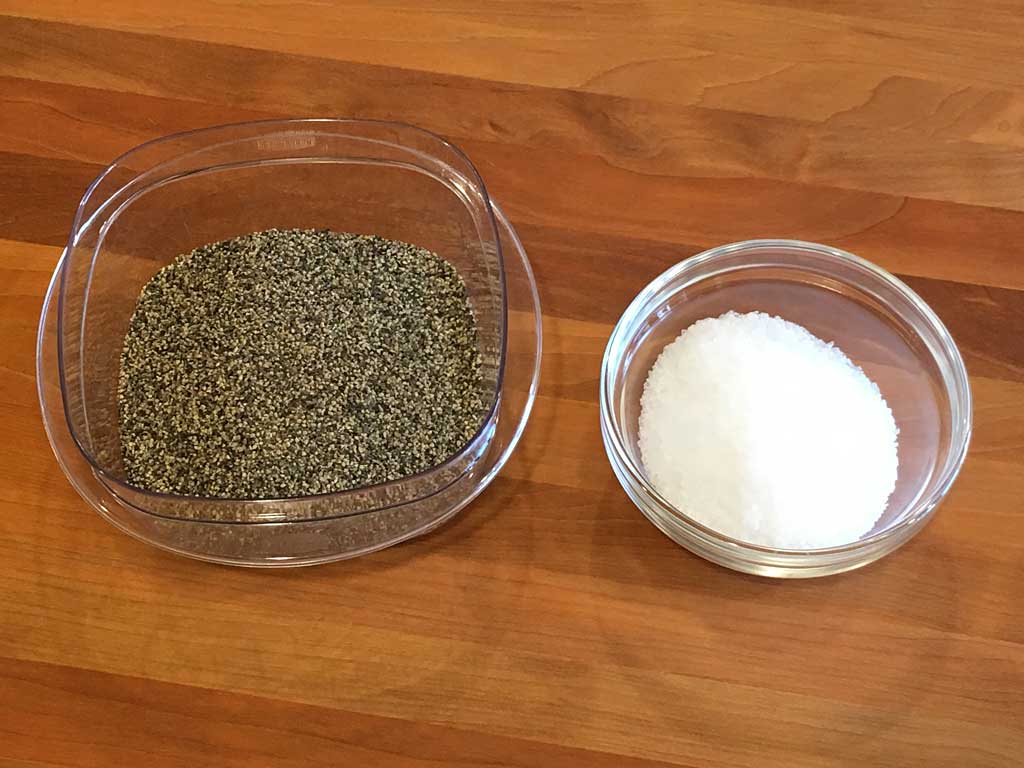 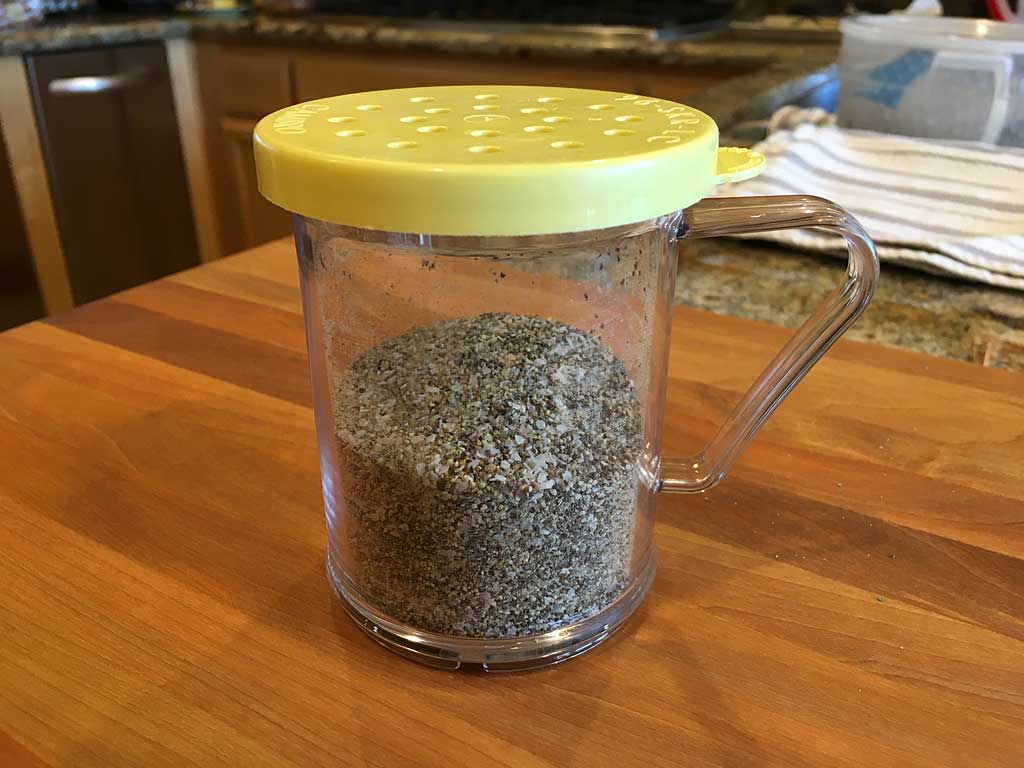 Use a good shaker to apply the rub evenly and generously all over the meat. Let the rubbed meat sit at room temperature while you fire up the cooker. 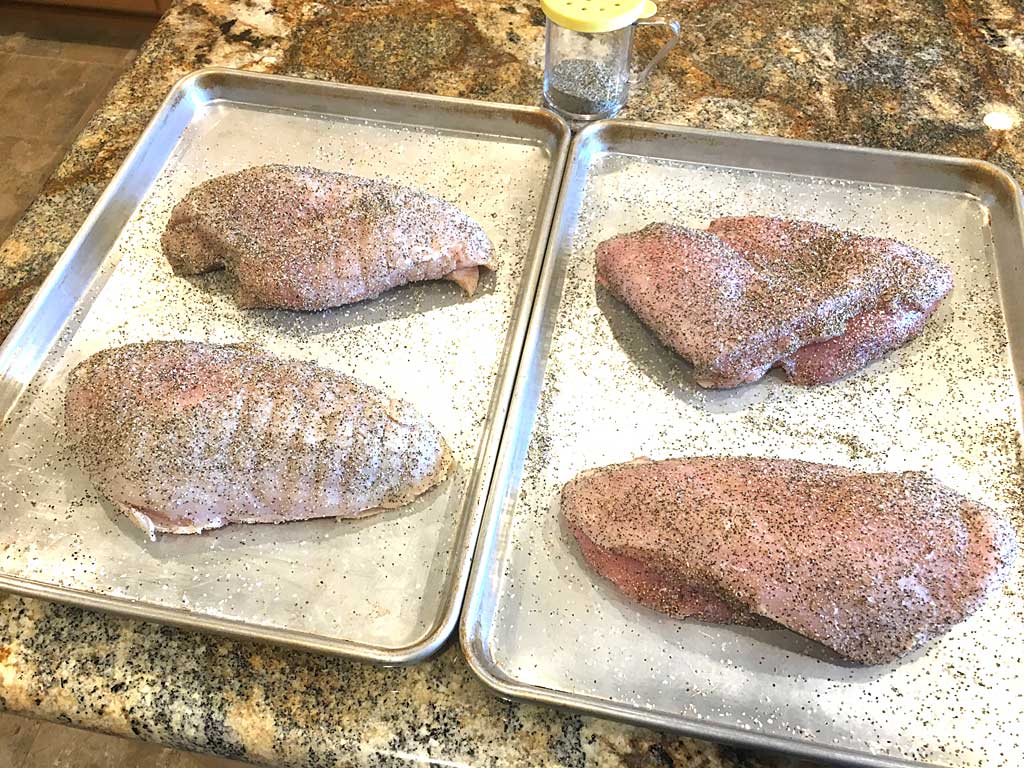 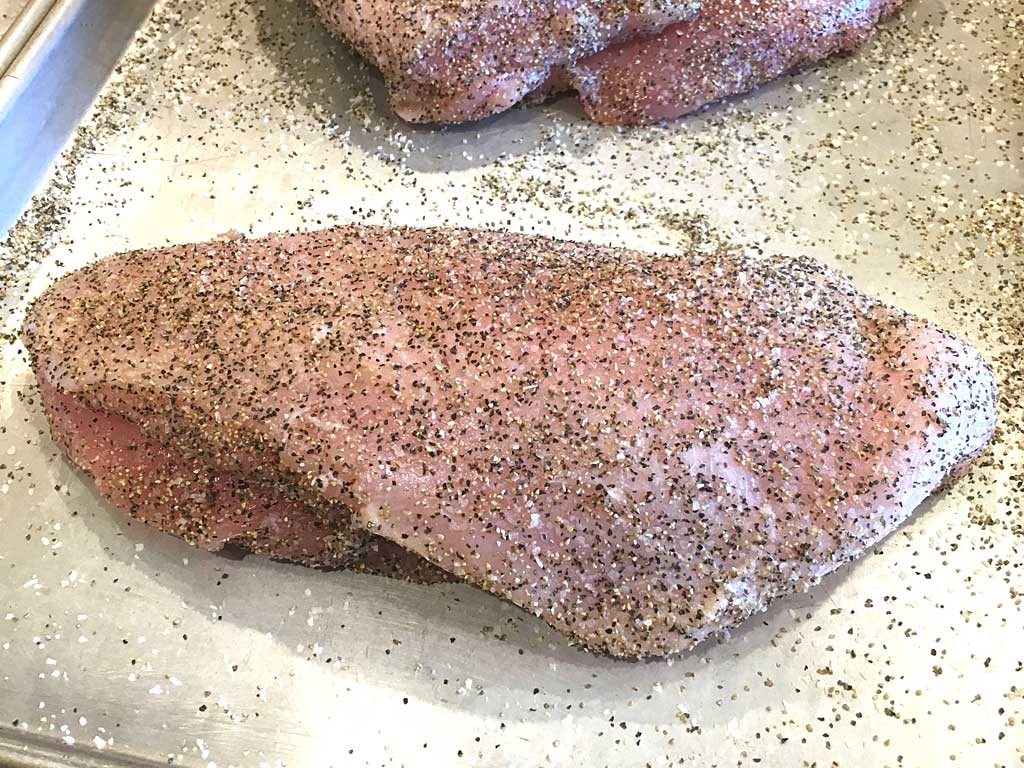 If you’re curious about the term “mesh” in regards to black pepper, it refers to the process by which ground pepper is separated by size using a series of coarse to fine mesh screens. A 6-mesh pepper is a large cracked pepper, a 12-mesh pepper is somewhere between cracked and coarse, a 16-mesh pepper is a coarse grind, and fine grind pepper can be 20-, 30-, even 60-mesh. Beyond 60-mesh you’re looking at powdered black pepper. 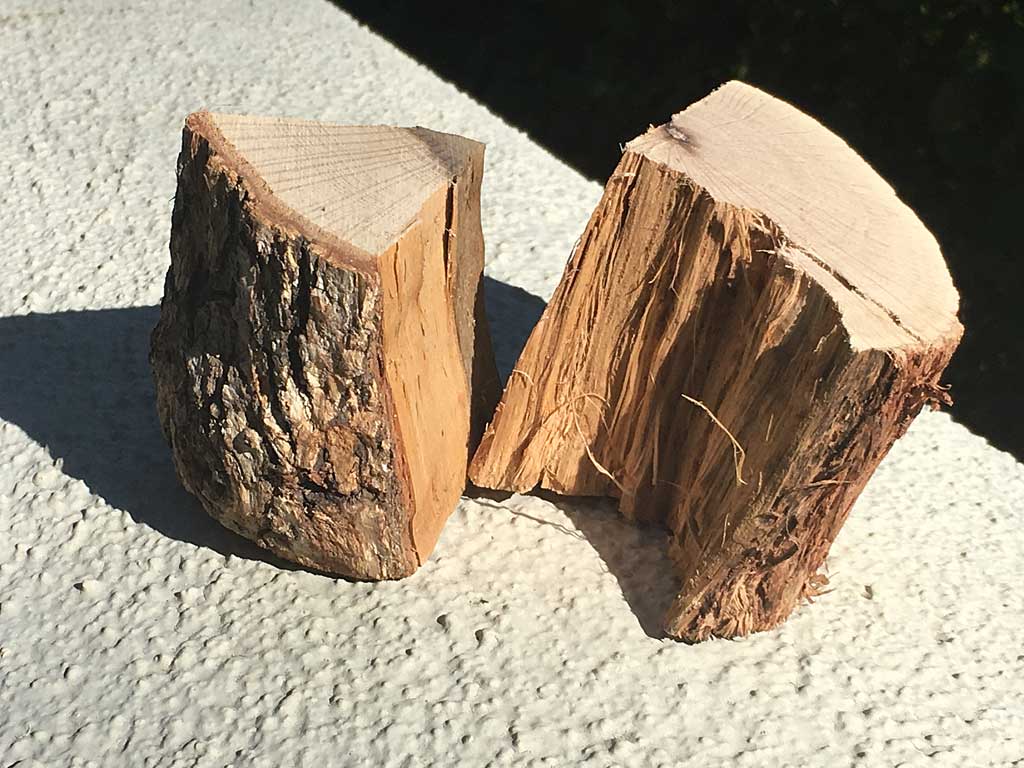 Use 2 chunks of oak smoke wood. Each chunk should be about the size of your fist. Pecan, apple, or another mild fruit wood can be used if oak is not available. 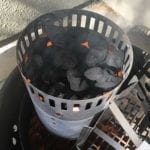 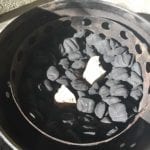 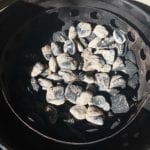 Fire-up the cooker using the Minion Method. Fill the charcoal chamber 1/3 full with unlit Kingsford Charcoal Briquets and nestle the wood chunks into the briquets. Use a Weber chimney starter to light 20-40 briquettes and place them on top of the unlit ones.

Put the water pan in the cooker and fill it with cold tap water to help with temperature control. 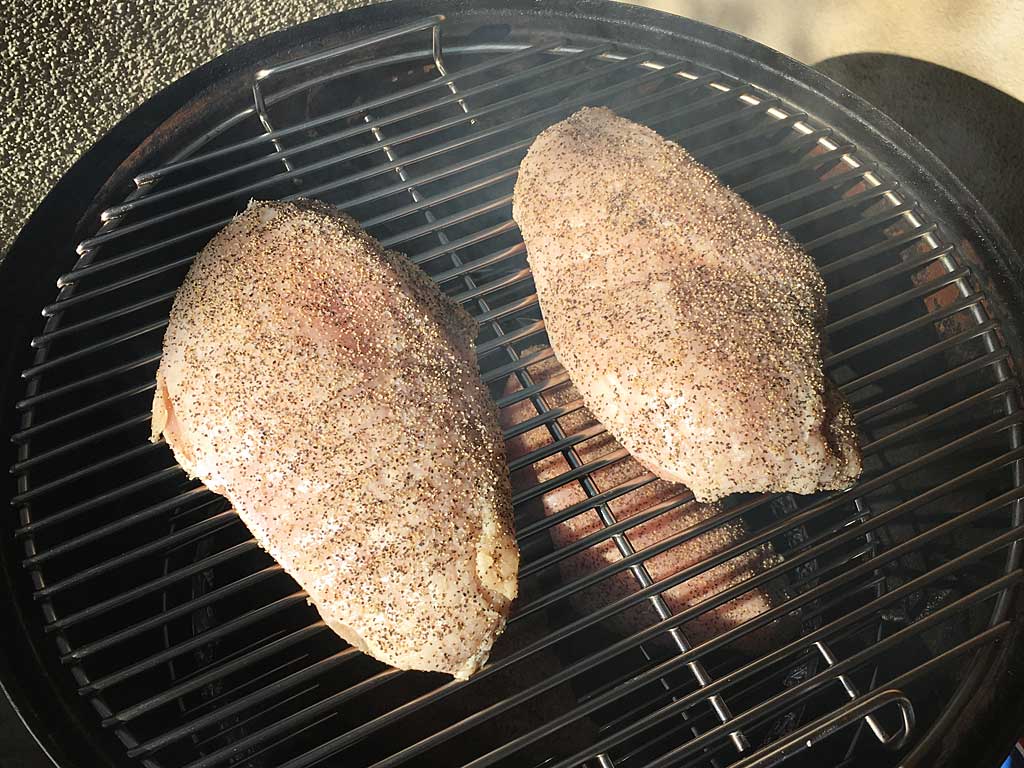 Assemble the cooker and load the turkey breasts onto the top and bottom cooking grates.

Smoke to 145°F, Foil With Butter, Return To Cooker 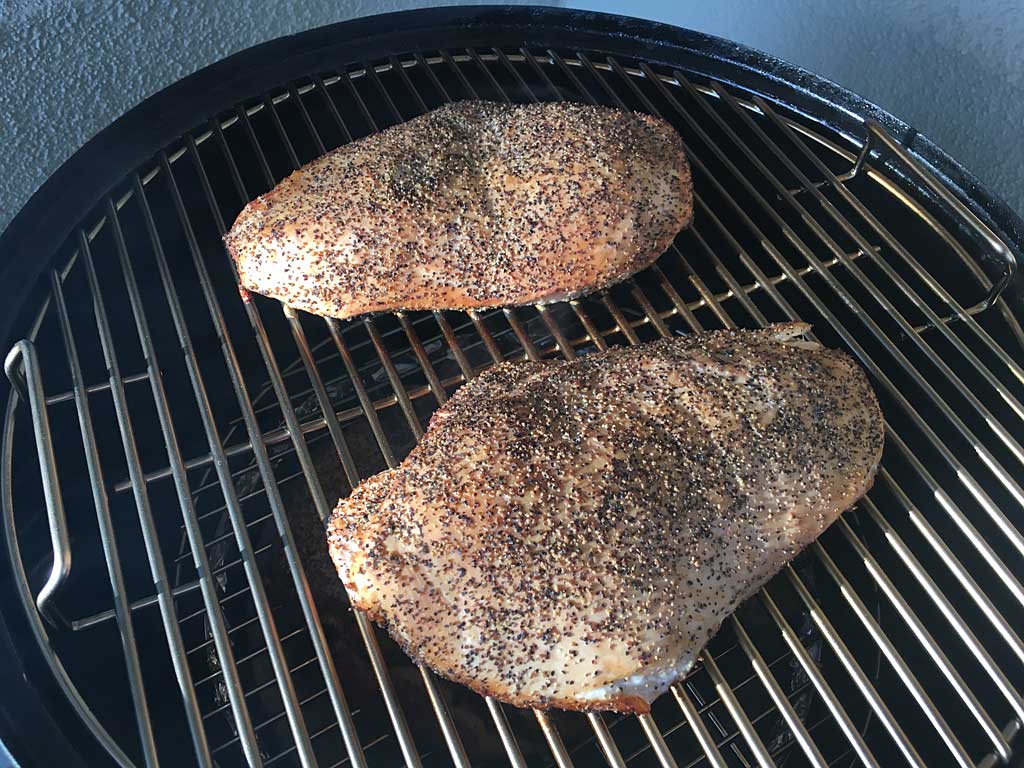 While the turkey is cooking, prepare two large sheets of wide aluminum foil and one stick of room temperature butter cut into pats for each breast. Yes, you read that right…Franklin uses 1 cup (2 sticks) of butter for 3-4 pounds of turkey breast. For smaller 1.5 to 2 pound breasts, that’s 1/2 cup (1 stick) per breast. 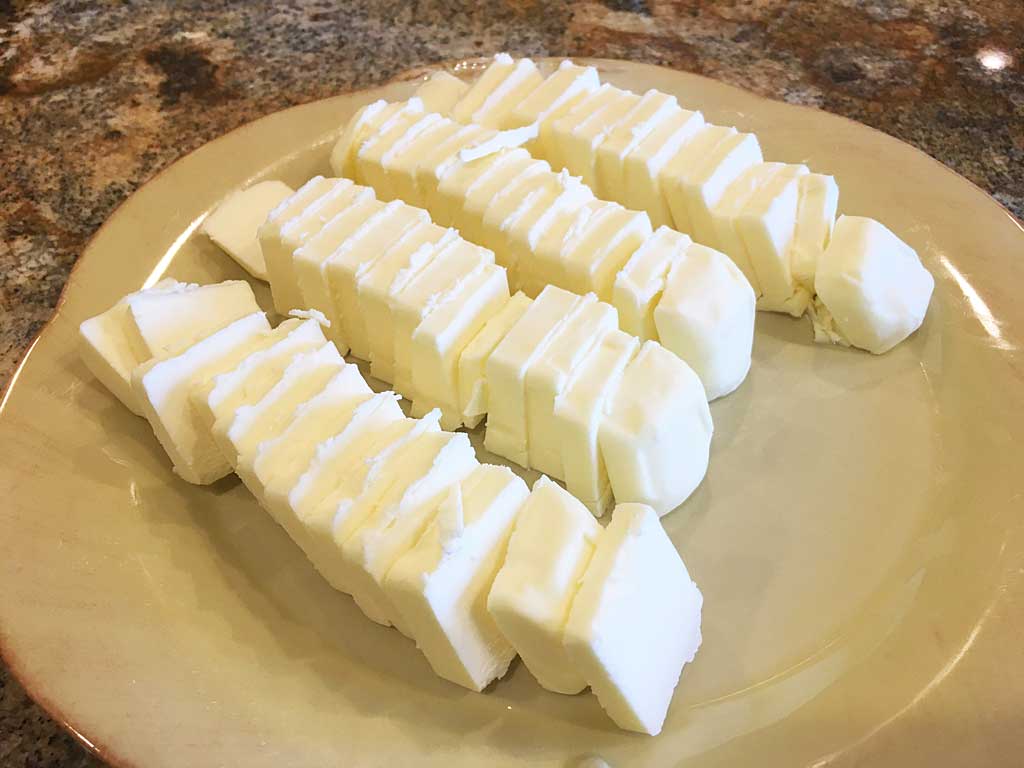 Smoke the turkey for 1 hour, then start checking the internal temperature using an instant-read thermometer. When the turkey reaches 145°F, take it into the house for foiling.

Lay-out two sheets of foil, arrange the butter pats in the center of the foil, place the turkey breast on top of the butter former skin-side down, and wrap into a tight package. To prevent butter from leaking, make sure there are no seams on the bottom of the package. 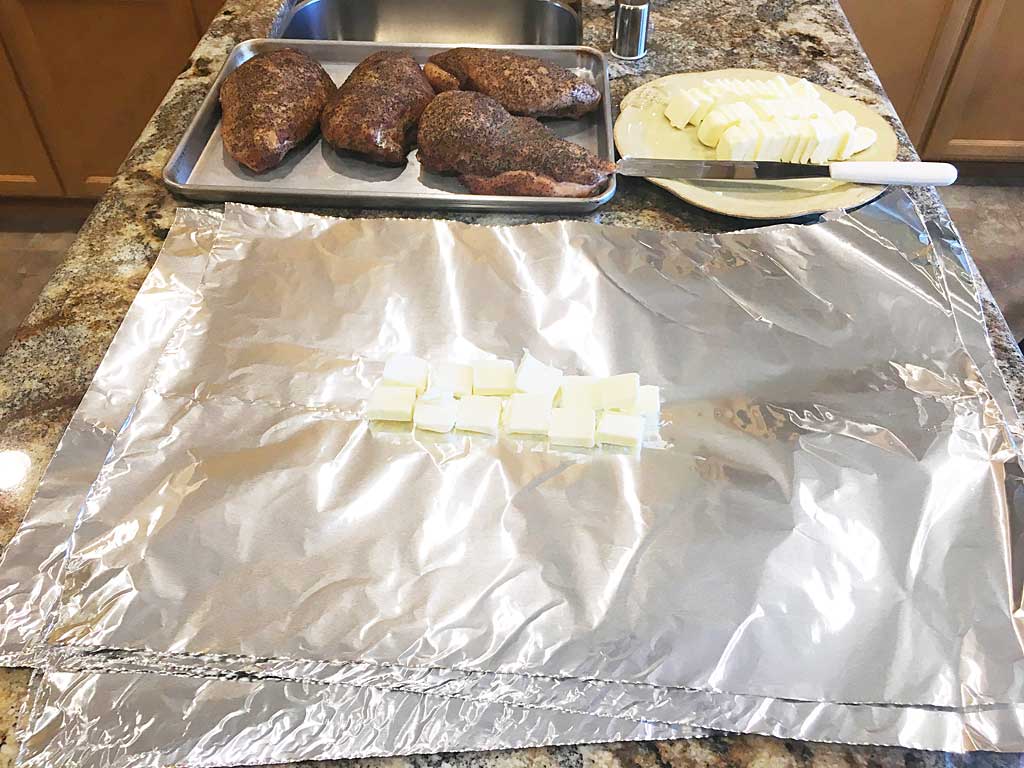 Return the foiled turkey to the cooker, butter-side down, and let the turkey braise in the butter and its own juices until it reaches 160°F, about another hour. 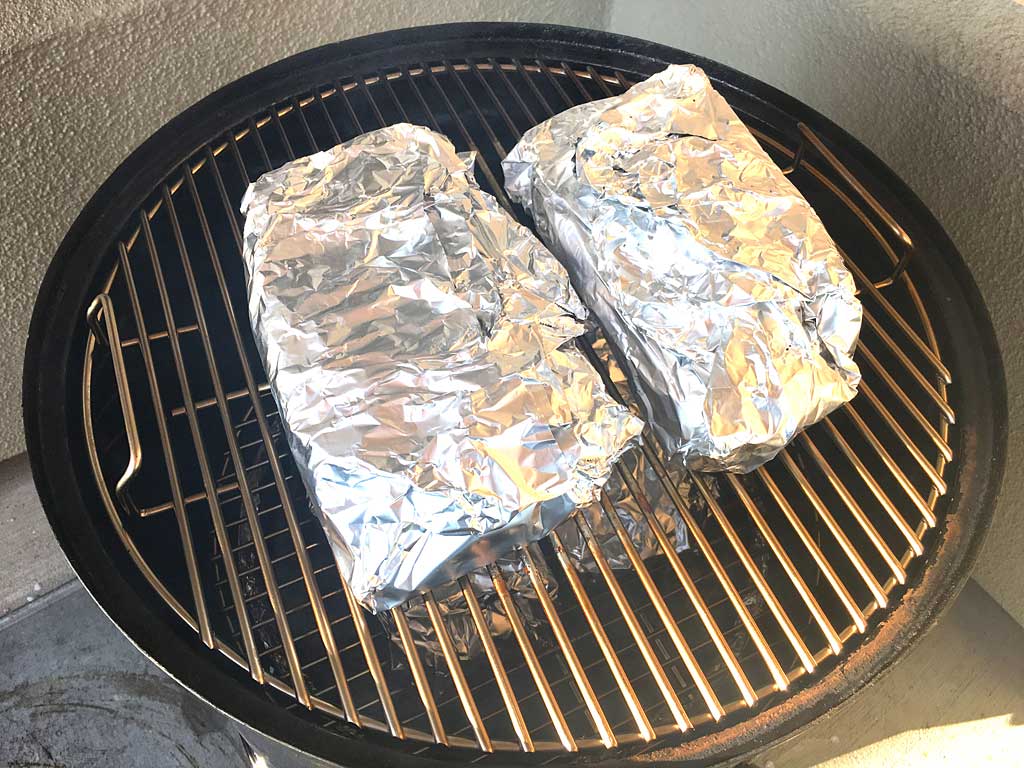 When the turkey is done, remove it from the cooker, slightly open the foil to vent the heat, and let rest for 20 minutes before serving. I like to slice across the grain about 1/4″ thick using an electric carving knife. 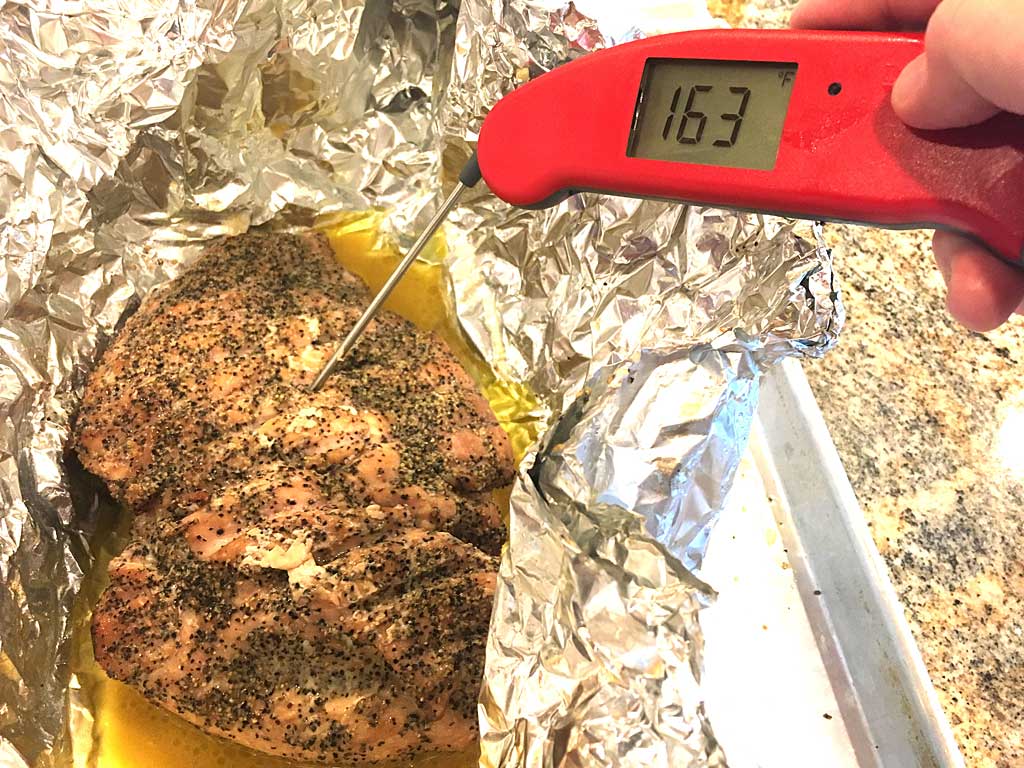 These breasts cooked beautifully. If you’re not watching your waistline, slices can be dipped in the melted butter/turkey juice mixture for added flavor and moisture and served on a plate or on a sandwich. 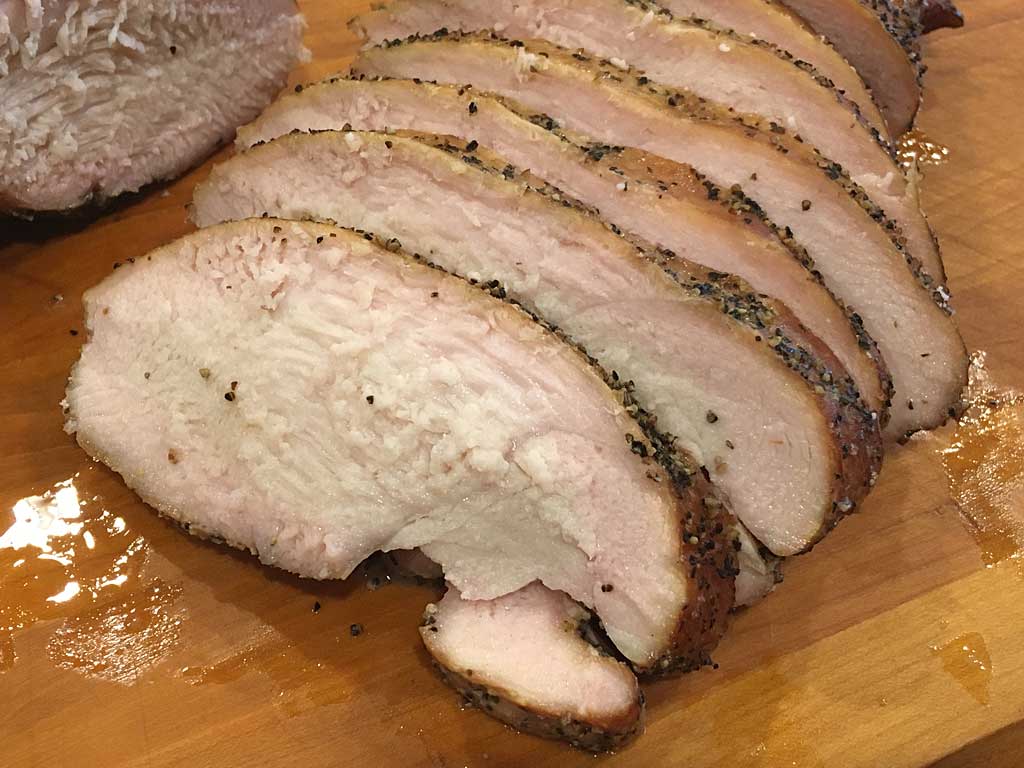 I made a delicious turkey sandwich on a kaiser roll with warm barbecue sauce on the side. 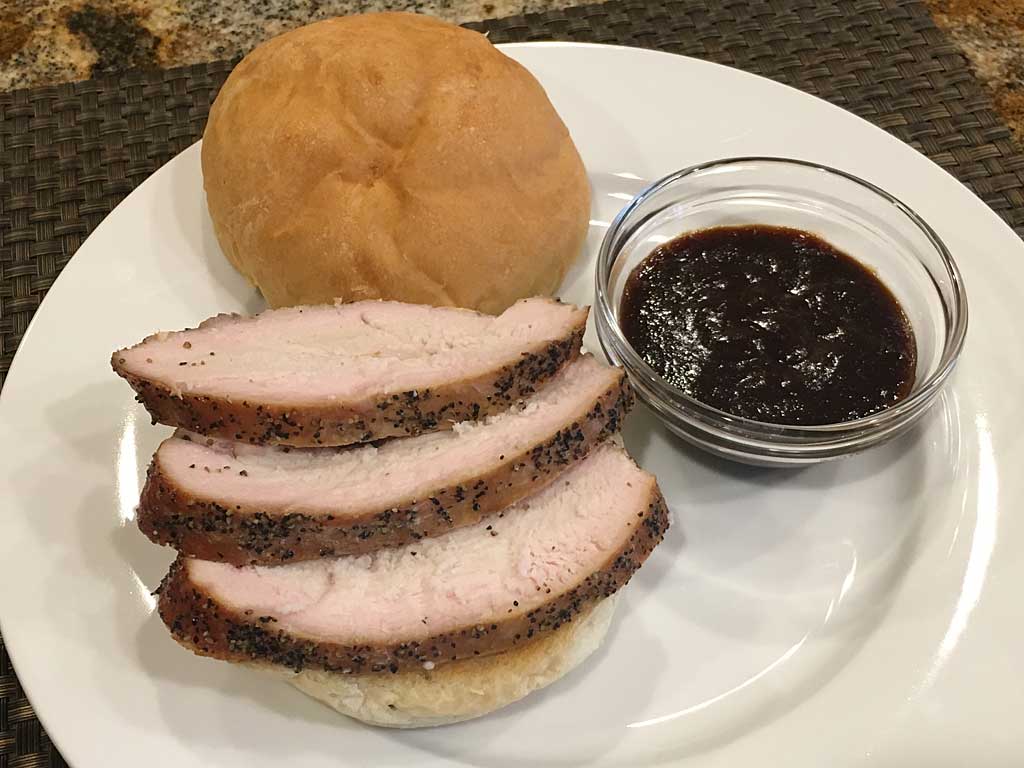 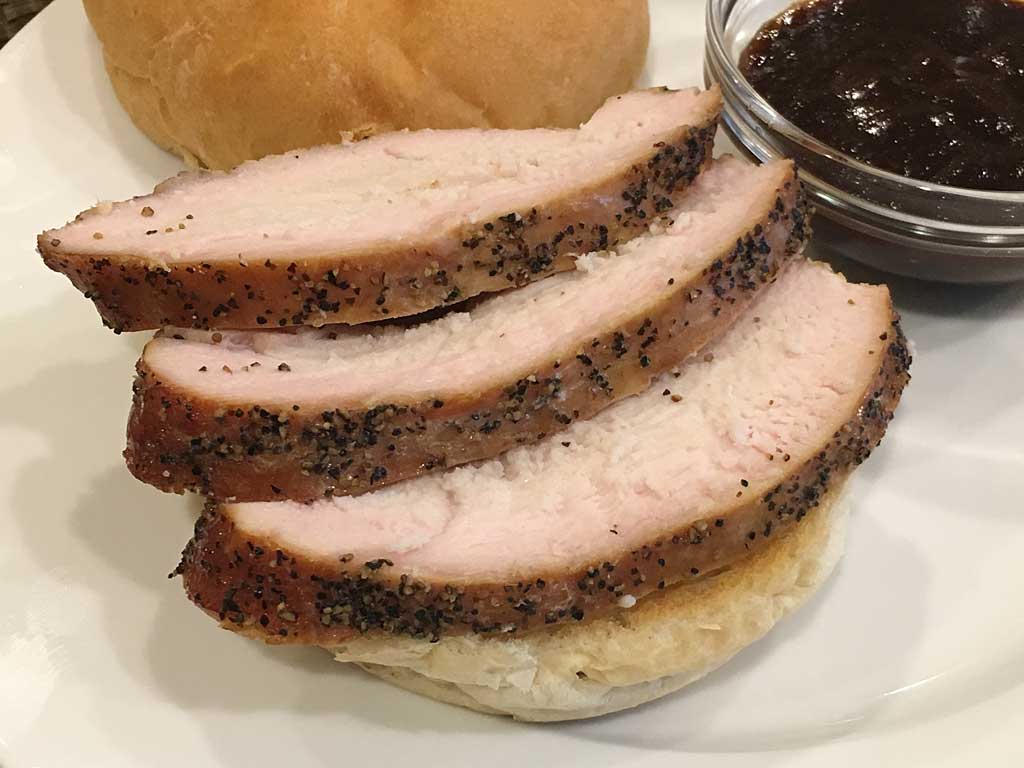 Large portions of leftover turkey breast were vacuum packed with a FoodSaver and frozen to enjoy another day.