This video demonstrates the steps described in this article.

Here are some pictures I took on June 10, 2000 when I prepped two slabs of whole spareribs for use in the Sugarless Texas Sprinkle recipe. These pictures illustrate the process of trimming whole slabs into St. Louis style ribs.

Anatomy Of A Whole Sparerib

These spareribs were purchased from the meat department of a high-quality grocery store. The combined weight of both slabs was just over 8 pounds.

This photo shows the meat side of the slabs. The area below the yellow line contains the rib bones, while the area above the line consists of the sternum (breast bone), costal (rib) cartilage, and attached meat. 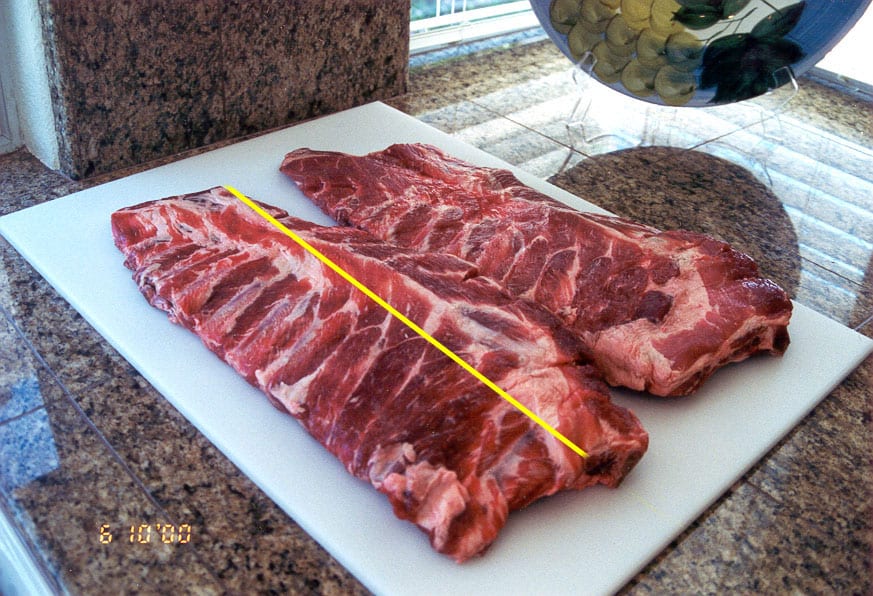 The next photo shows the bone side of the slabs. The yellow line again delineates the bones (now on the right) from the sternum, cartilage, and attached meat. The green lines outline the skirt meat, which runs diagonally across the bones. 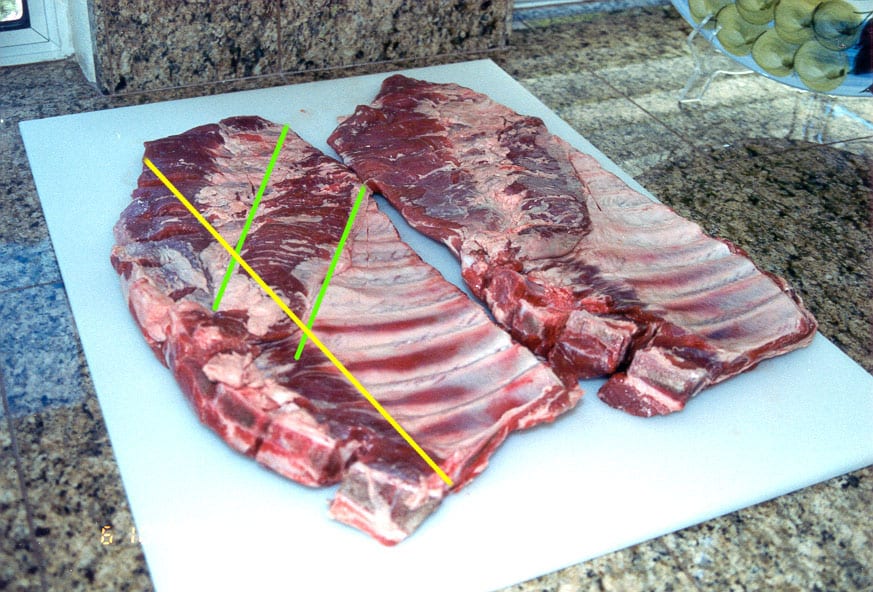 This photo is a close-up of the sternum, a solid 5-6″ length of bone. My butcher prepped these slabs by making a series of 2″ deep cuts through the sternum, which makes cutting the slabs into serving portions easier if you were to cook the slabs whole. 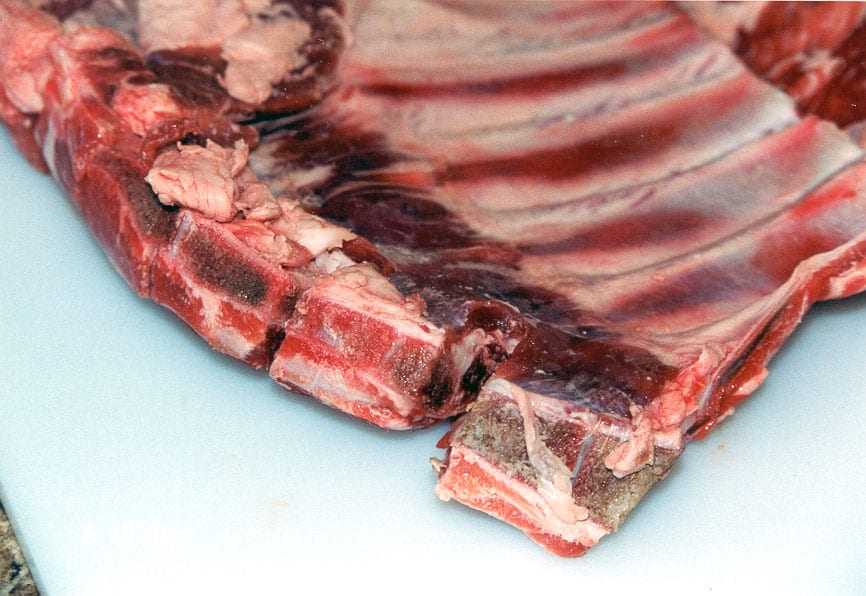 The next two photos show a close-up of the skirt meat. It’s a flap that’s attached diagonally to the bone side of the slab. The skirt will vary in size from one slab to another. 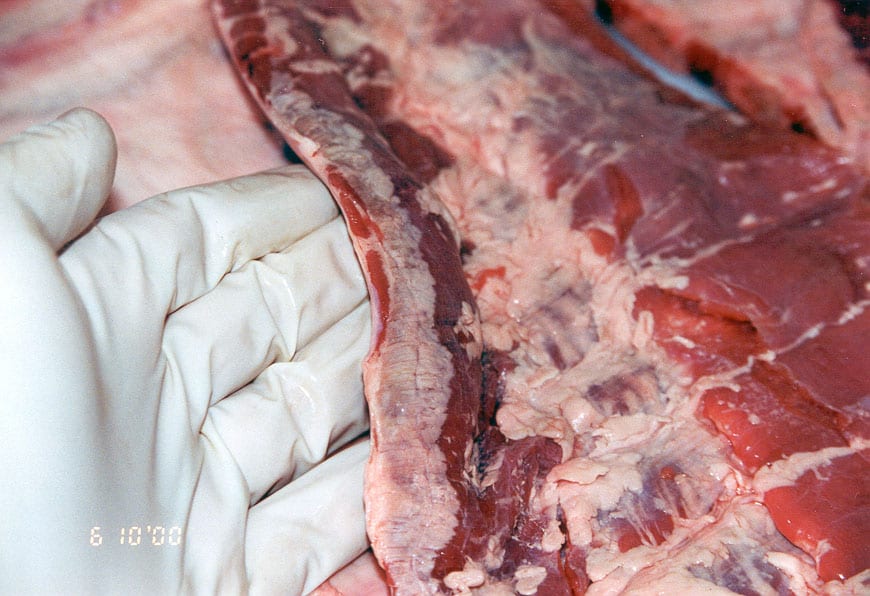 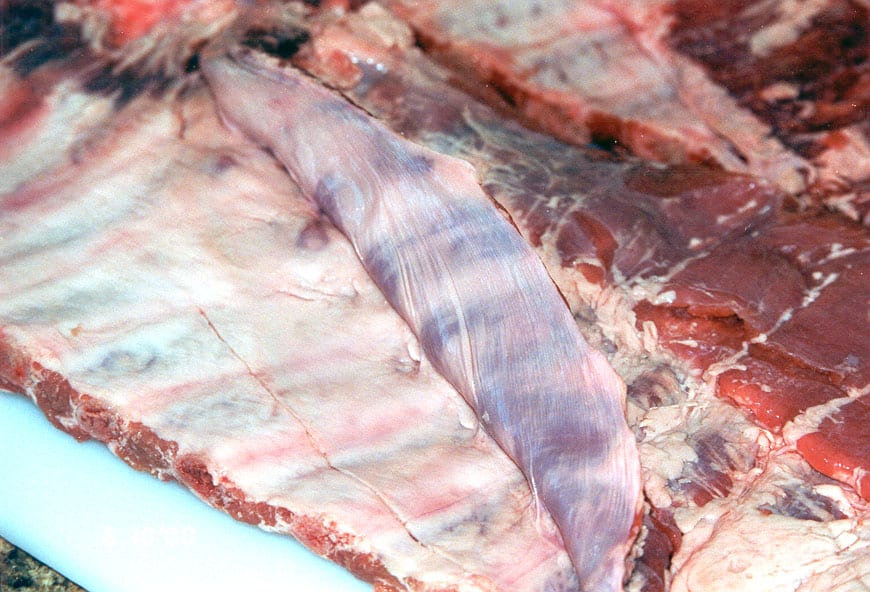 Lots of folks like to remove the membrane from the bone side of the slab (described below) and cook the spareribs whole, just as you see them here. However, they’re kind of hard to fit into the Weber Bullet this way, so most WSM owners will trim them down into St. Louis Style. 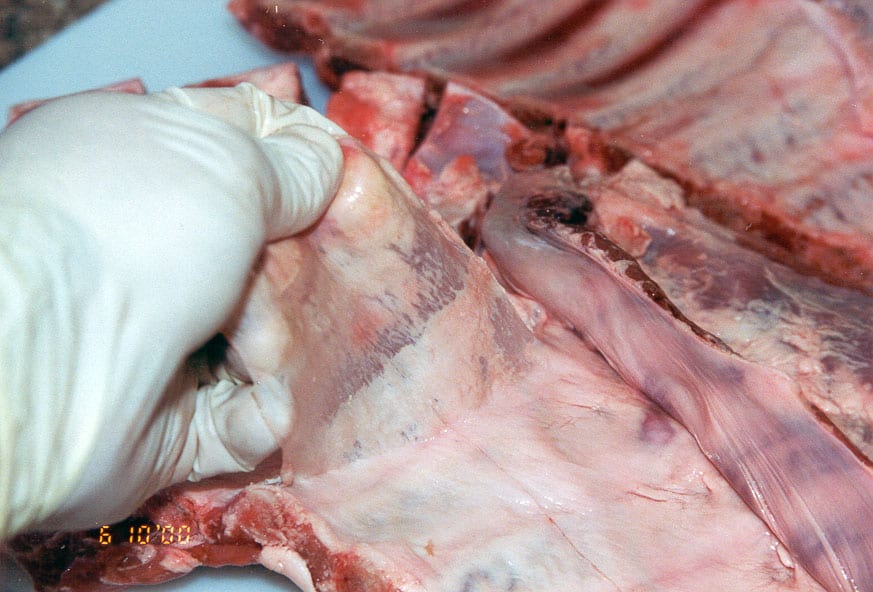 Start by removing the membrane from the bone side of the slab. This is sometimes referred to as “skinning the ribs”. The membrane is a layer of stretchy material that makes for tough eating and inhibits the penetration of rub and smoke into the meat.

Some people (and some barbecue restaurants) skip this step altogether, while others score the membrane with a sharp knife instead of removing it. Personally, I believe removing the membrane is one of the real secrets to creating great ribs.

To remove the membrane, use a butter knife to pry up an edge of the membrane at the sternum end of the slab—the end with the longest bones. Some people find that a screwdriver or oyster knife works well for this task. Use whatever tool works best for you.

Once you get a small area pried up, grasp it with a paper towel and pull it off toward the other end of the slab. If you’re careful, you can get the membrane off in a single piece, but sometimes it shreds as you pull it off. That’s OK, just pry up those remaining bits with your knife and remove them.

You’ll notice a thin layer of membrane-like material beneath the membrane you have just removed. This material is what holds the meat and bones together. Just leave it alone—we’ve removed the tough stuff we were after.

If you purchase ribs from a full-service meat department or butcher shop, ask them to remove the membranes for you.

To create a St. Louis Style sparerib, position the slab bone side up. Using a very sharp knife and starting at the sternum end of the slab, cut just above the ends of the bones down the length of the slab, cutting through the cartilage. The result will be a slab of fairly even width ribs. 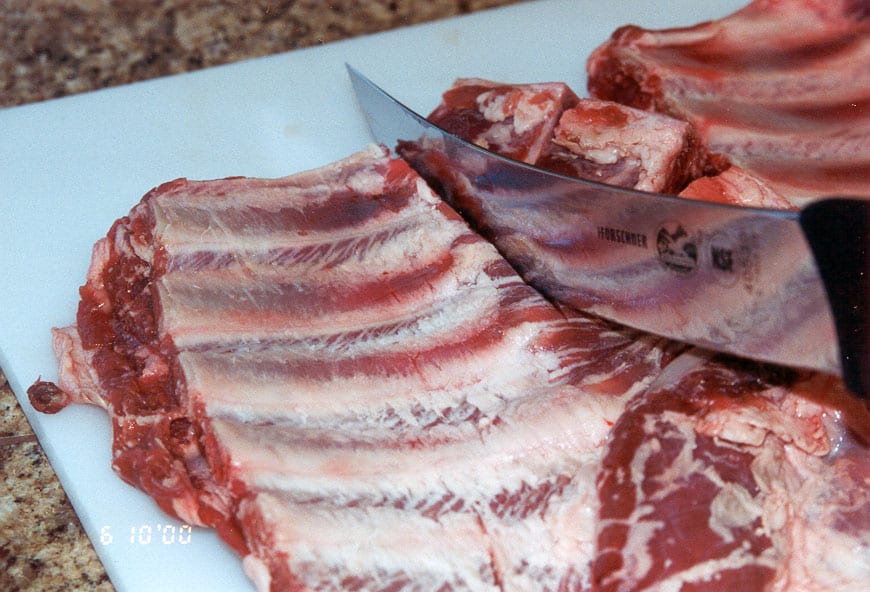 You will notice that my cut wandered away from the ends of the bones toward the narrow end of the slab, as noted by the yellow line. This was a little sloppy on my part, and I should have trimmed off a little more in that area to end up with the best St. Louis Style cut. You’ll also notice there’s a large chunk of meat attached at the bottom end of the slab. You can leave it as-is, or you can square off the end as shown by the yellow line. 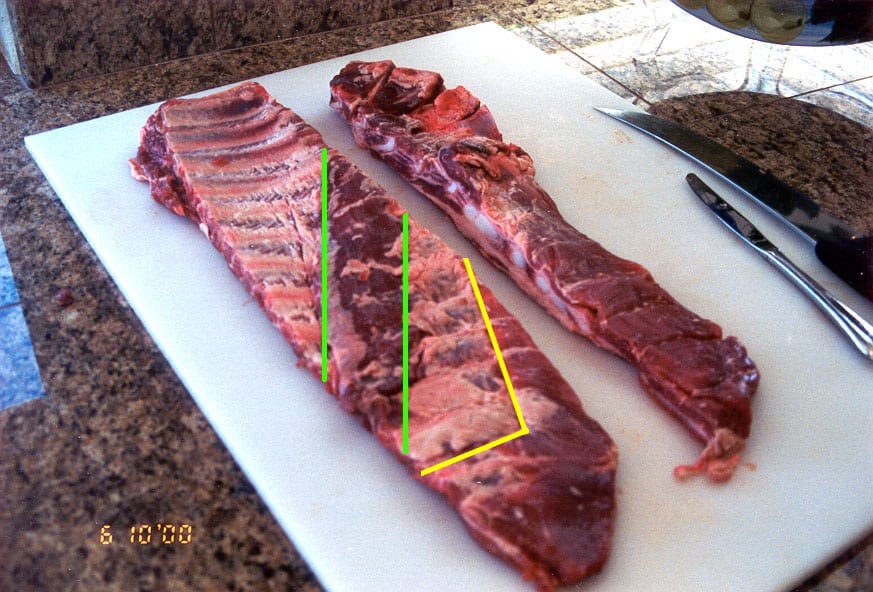 The green lines in the photo above outline the skirt meat. Trim off the skirt meat flush with the bones, as shown in the next two photos. 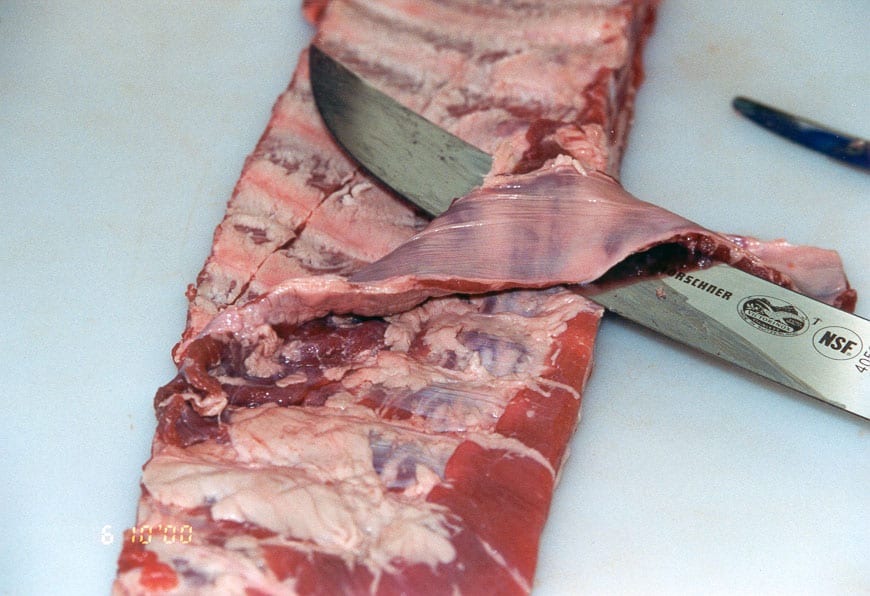 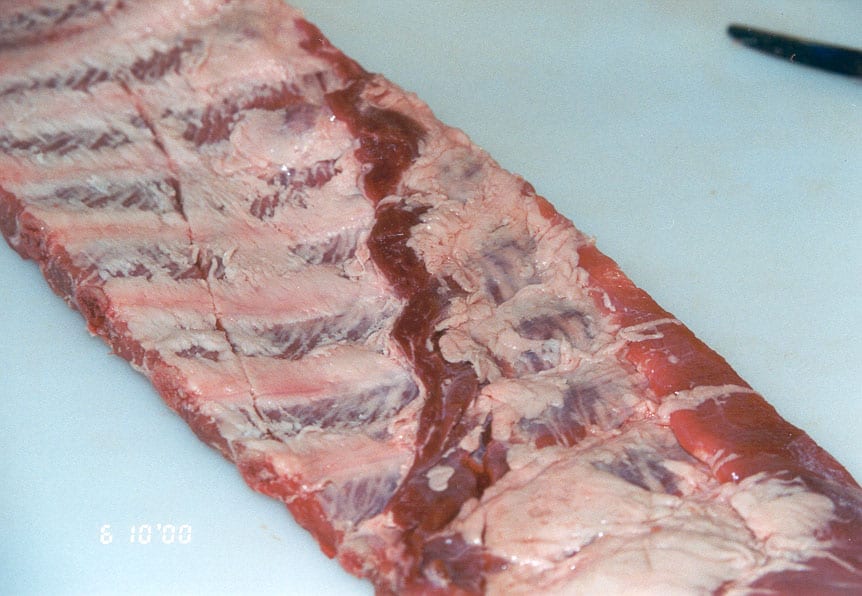 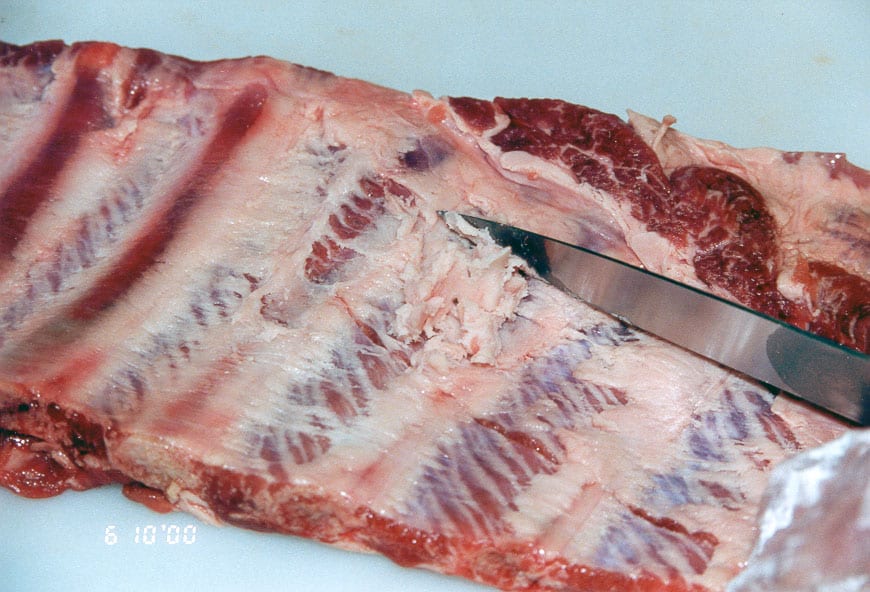 With the membrane removed and trimming complete, scrape away any large deposits of fat hiding between the bones. Next, flip the slab over and trim off any large areas of fat on the meat side of the slab.

The point here is to just remove the large areas of fat. Don’t worry about smaller areas of fat. Most of that will render during the cooking process. 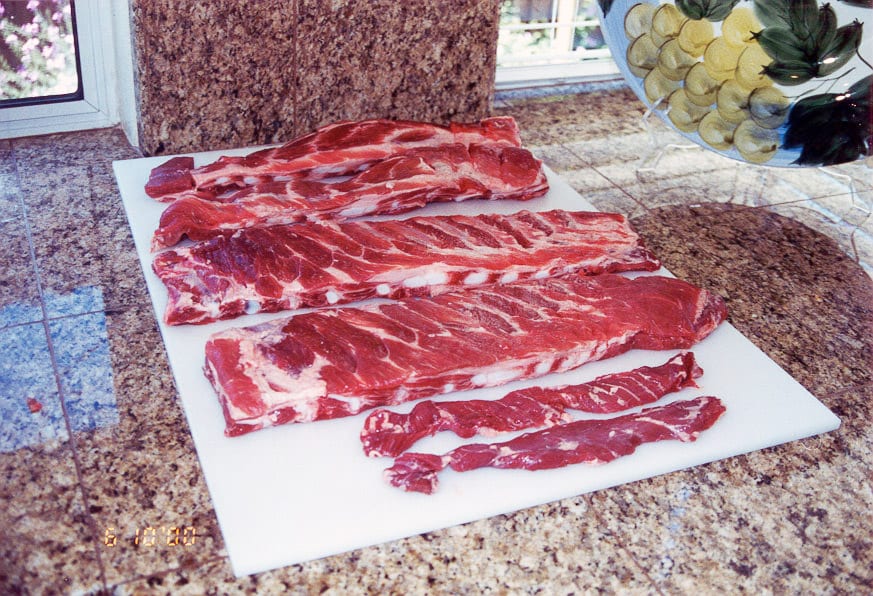 This picture show the resulting six pieces. The two St. Louis Style spareribs are in the middle, with the two trimmed skirt pieces in the front and the two pieces of sternum, cartilage, and attached meat in the back. All these pieces got a good sprinkling of Sugarless Texas Sprinkle Rub and went into the cooker.