How Does It Compare To The 2014 Formula?

The first highly publicized change to Kingsford’s flagship product occurred in 2006 when the formula was changed to include more “high quality ingredients” (more wood char, less coal) and the design was changed to include “Sure Fire Grooves” stamped into the back of each briquet. These changes made each briquet lighter and therefore reduced the weight of each bag. Kingsford stated that bags contained the same number of briquets as before and claimed that consumers would get the same number of uses per bag and virtually the same amount of cooking time per use, but with faster lighting so users could start cooking sooner.

At the time of this news, faithful Kingsford customers were up in arms about the changes, accusing the company of cheapening the product for the sake of increased profits. For a while, it seemed like the new formula might be to Kingsford what “New Coke” was to Coca-Cola—a PR disaster. But Kingsford stayed on-message, communicating the benefits of the changes to users, and invited people like me to visit their R&D facility to get a first-hand look at how the new product performed, which I wrote about in a lengthy article in 2006. In the end, the sky did not fall. The new product worked almost as well as the old version, and most Kingsford users stayed loyal to the brand.

Fast-forward to the next product change that occurred in 2010. Once again, the amount of wood char in the formula increased and the amount of coal decreased. The “K” imprint and “Sure Fire Grooves” were deepened and the grooves were lengthened by running them diagonally across each briquet, all of which helped the charcoal light more quickly. The company also made a series of environmental claims about the changes in terms of reduced landfill waste and carbon dioxide emissions, reduced use of non-renewable coal resources, and fewer truck miles on the road. This time around, there was no uproar. Just like in 2006, the new 2010 formula worked almost as well as the old version and people continued buying lots of Kingsford.

In January 2015, Kingsford once again tweaked the product formula and design. The amount of wood char in the formula has increased yet again. According to the product packaging, the design has changed to “improve airflow” so that coals get “hot to the core, fast”. A product FAQ on the Kingsford website says that the company is “increasing airflow in its briquets”. According to the FAQ, the benefits are that the charcoal will “light easier and heat faster, but burn as long as ever”. It goes on to say, “The formula changes make each briquet slightly lighter in weight, but the amount of usages per bag remains the same.”

In the artwork on the bag, increased airflow is represented by a series of fine lines running across the surface of the briquet. However, an examination of actual briquets under a magnifying glass shows no such lines. In reality, increased airflow is achieved by a using a more porous mix of materials. To the untrained eye of this author, the shape of 2014 and 2015 Kingsford appears to be exactly the same.

The product FAQ on Kingsford’s website makes no environmental claims about the formula change, but a Product Fact Sheet obtained by this website indicates environmental benefits of less ash going into landfills, reduced carbon dioxide emissions of 12,300 metric tons per year, and fewer distribution truck miles on the road due to reduced product weight. These claims are similar to those made when Kingsford was revised in 2010.

Here are some photos of the old and new packaging and the marketing text found on each. 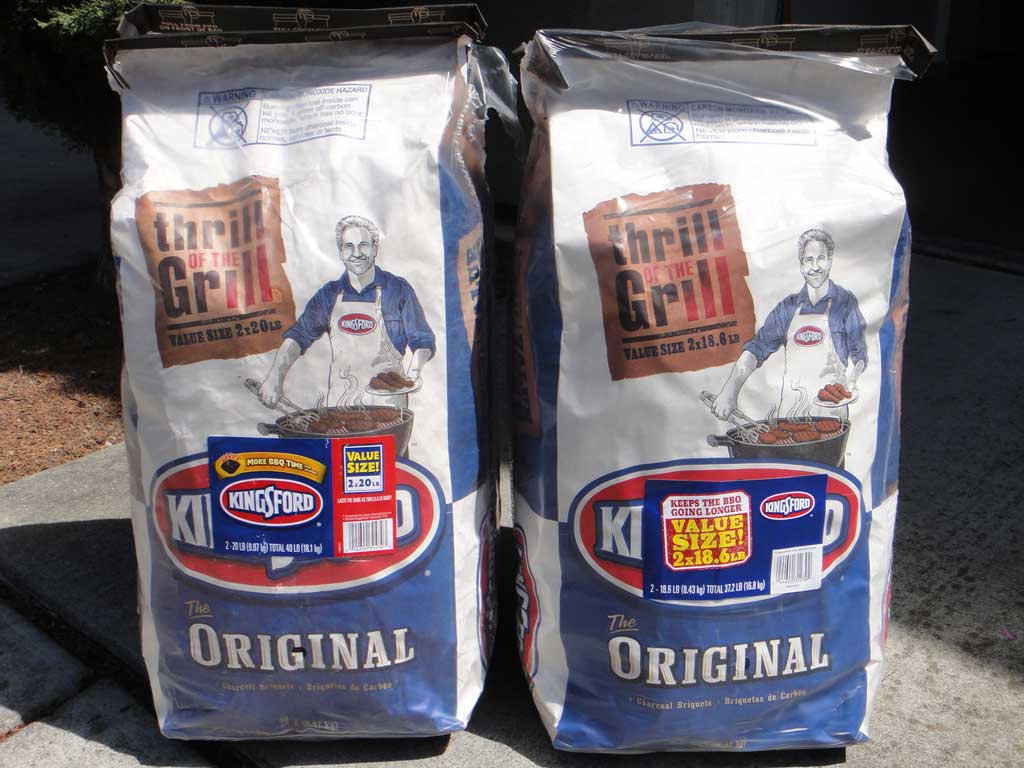 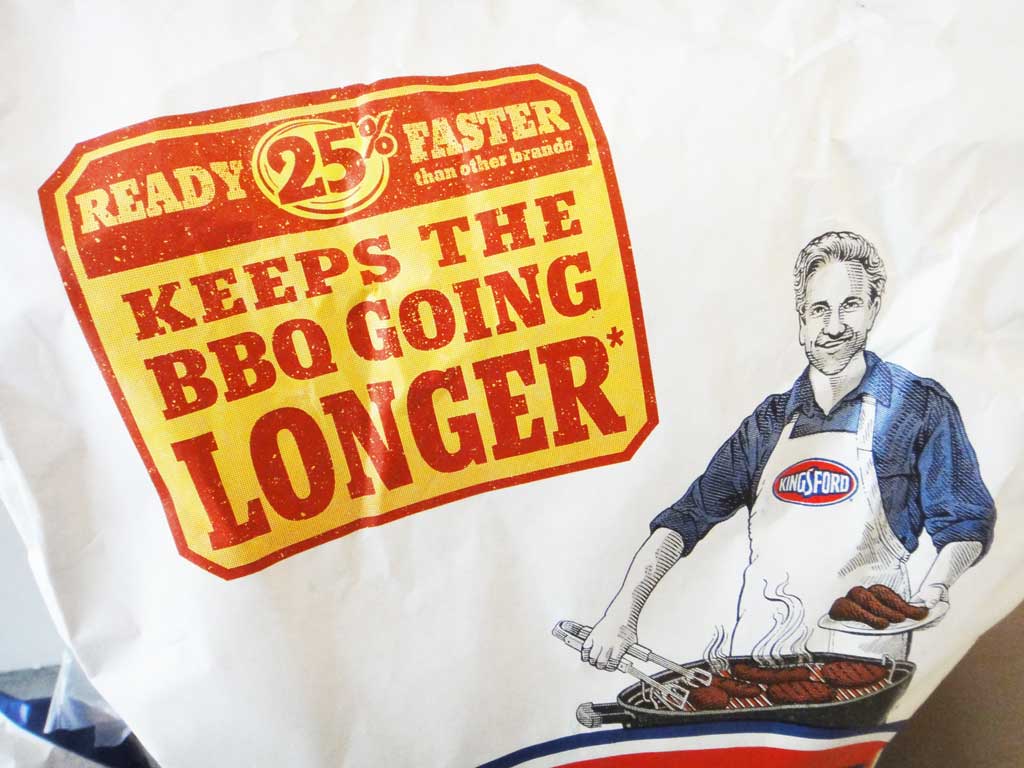 What Kingsford Says About 2015 Briquets

Kingsford makes the following claims about the new 2015 briquets on the bag and on their website FAQ:

Here are side-by-side photos of 2014 and 2015 Kingsford briquets. To my eye, I was unable to discern any difference in the shape, size, or impressions on each briquet. However, the difference in weight between the two was clear, both when handling the bag and when holding several briquets in each hand. 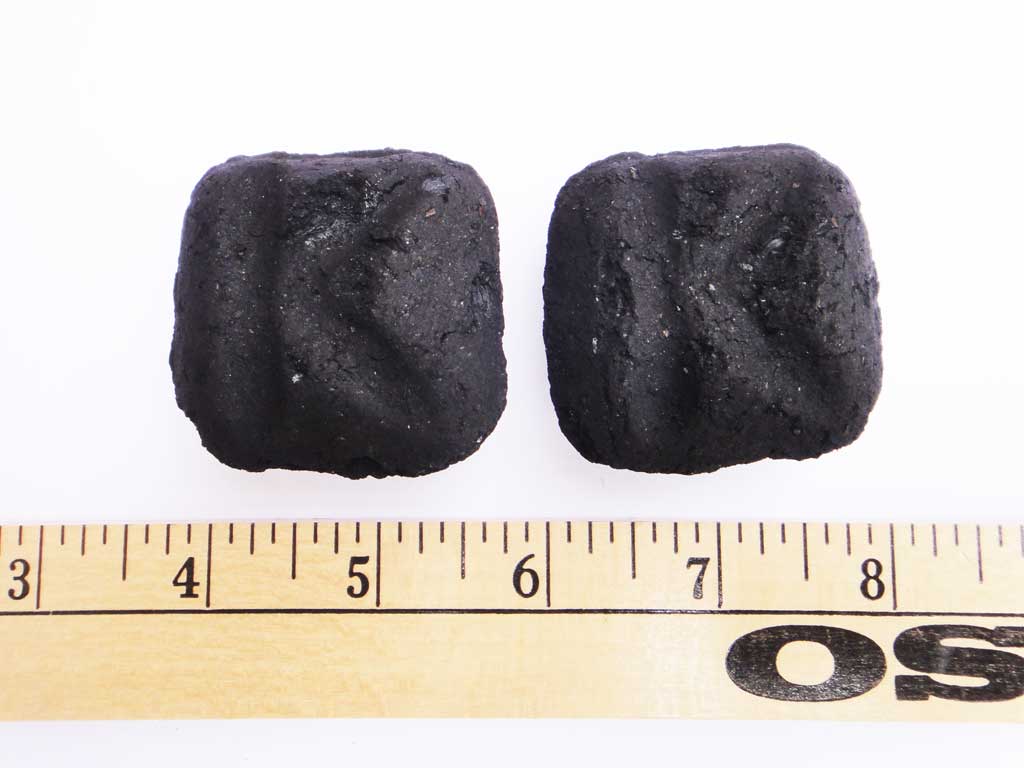 Front view of 2014 Kingsford (left) and 2015 Kingsford (right). Briquets continue to feature the “K” imprint on the front. 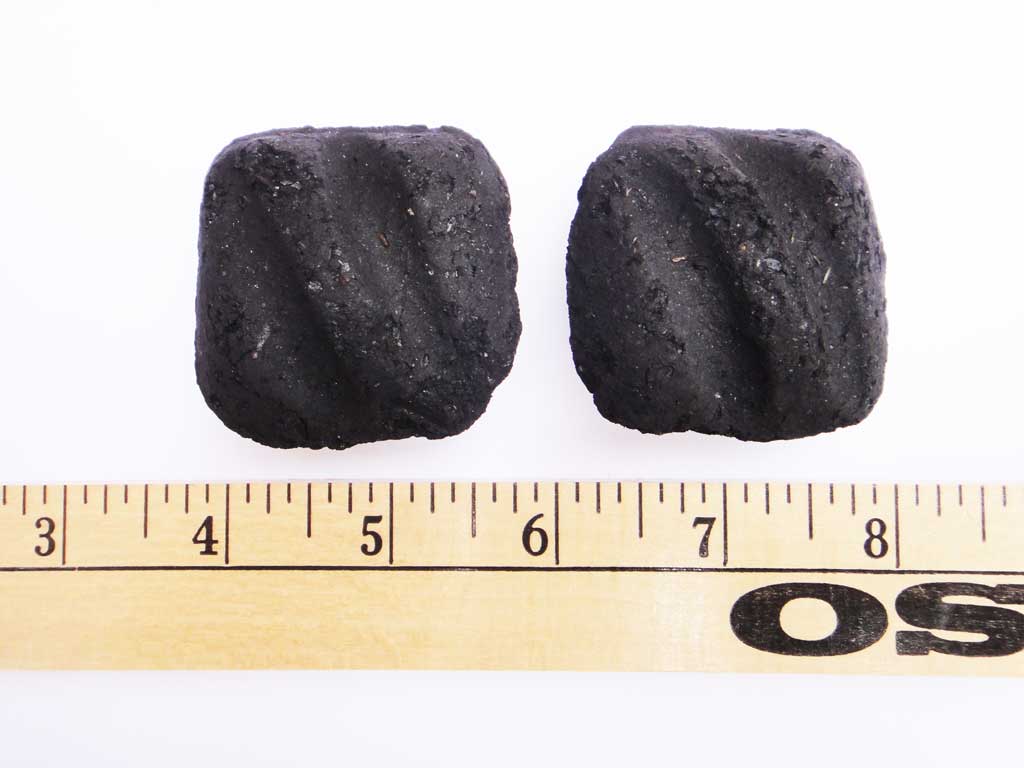 Reverse view of 2014 Kingsford (left) and 2015 Kingsford (right). Briquets continue to feature diagonal “Sure Fire Grooves” on the back.

Side view of 2014 Kingsford (left) and 2015 Kingsford (right). There does notappear to be any difference in shape or thickness between the two briquets. 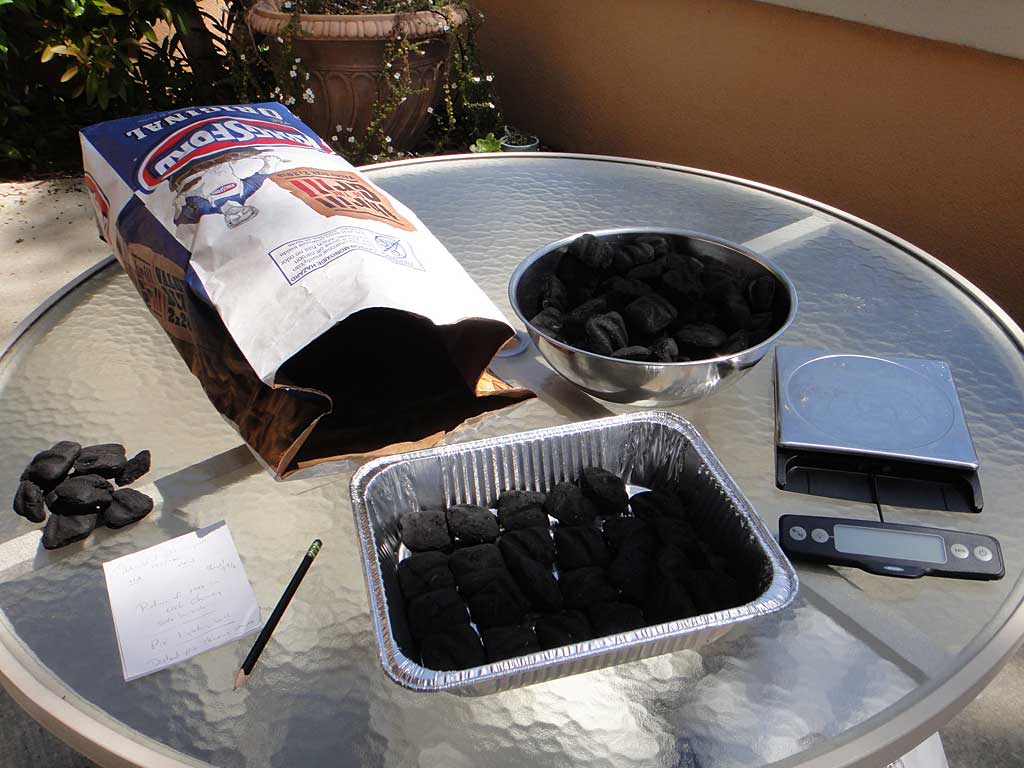 Counting out and weighing 100 briquets for the burn test.

I counted out 100 of each briquet, weighed them using an electronic kitchen scale, and found the following:

Notice that the bag indicates a 7% reduction in weight (20 lbs vs. 18.6 lbs) while weighing 100 briquets yielded a reduction of about 6%. This difference may be due to a variety of factors, including variances in the manufacturing process, worn press rolls, amount of moisture in the product samples, or other factors.

I placed 100 of each briquet in identical Weber chimney starters and lit the charcoal with one Weber lighter cube. Unlike burning in the damper-controlled environment of a Weber smoker, this was an uncontrolled burn test—I just lit the charcoal and watched what happened over the next 2 hours.

Each chimney starter was placed over a disposable foil pan so I could measure the weight and volume of ash produced after burning.

During startup, both charcoals produced a similar amount and color of white smoke with the usual Kingsford smell. 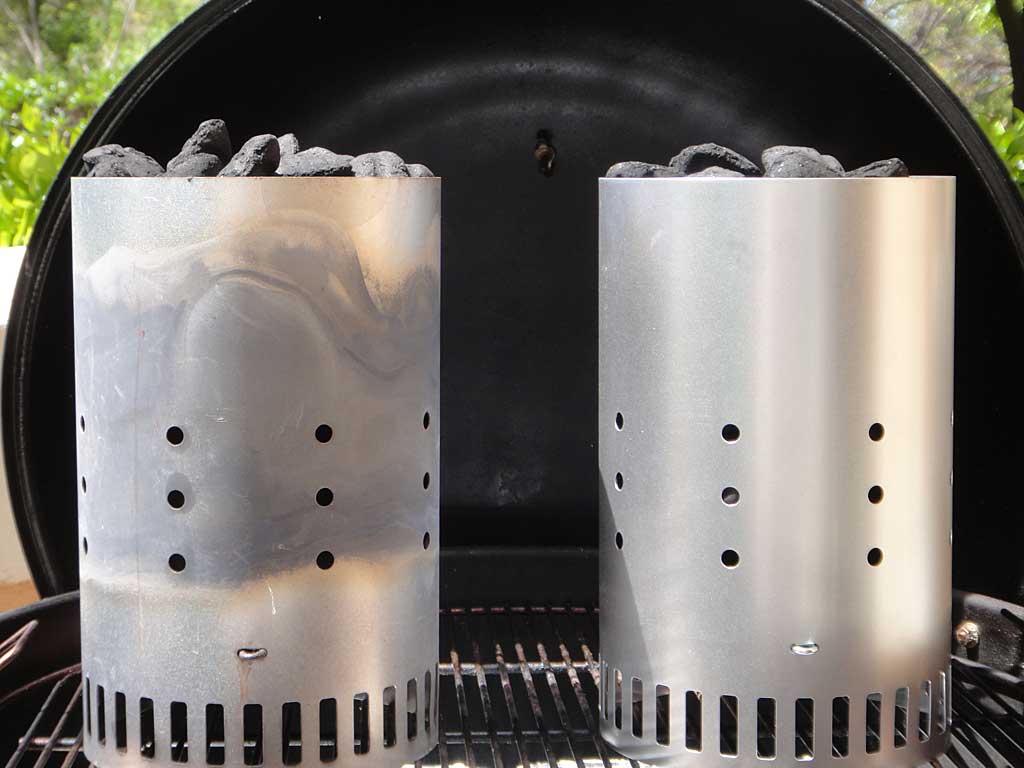 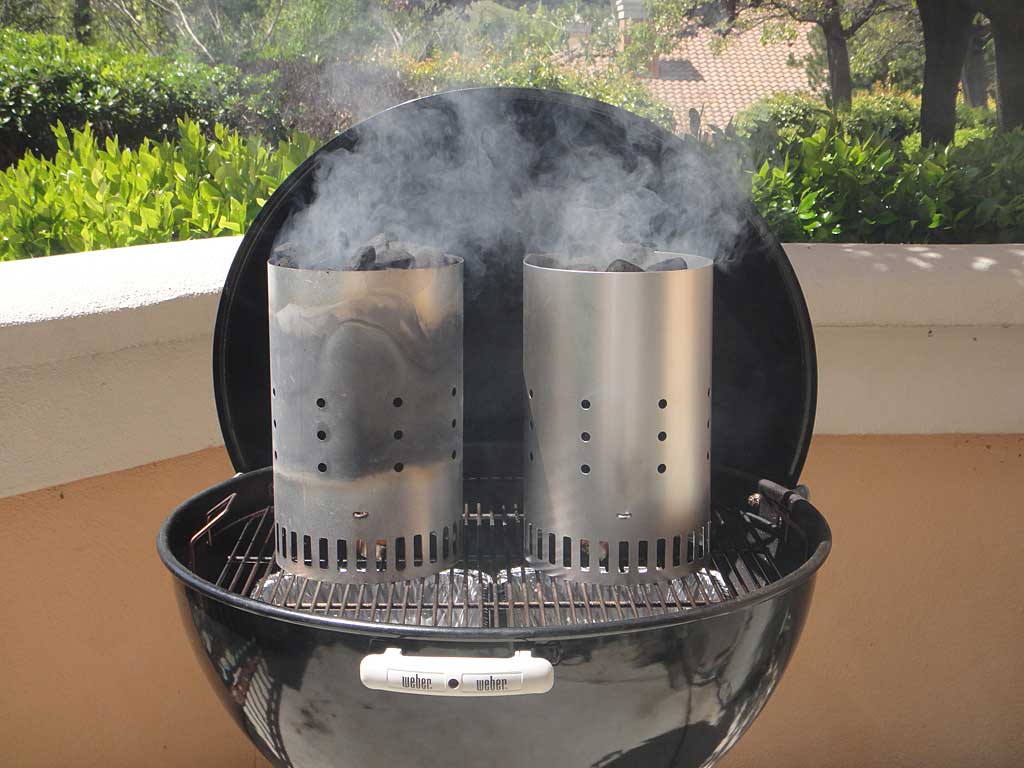 Thick, white smoke comes out of both chimneys during the first 10 minutes.

You’ll notice in the photo on the left that the 2014 charcoal is mounded up a bit higher than the 2015 charcoal. I didn’t “shake down” the chimney as I added the charcoal, I just poured it in as it wanted to go. So this difference may be due to variability in how the briquets fell into each chimney and nestled together.

Notice that the first signs of gray ashing occur in the 2014 product at 15 minutes.

At 20 minutes, more ashing and orange flames are visible in both samples.

At 30-35 minutes, both charcoals seem to be burning and ashing over to the same extent.

At 85-120 minutes, it becomes clear than the 2015 charcoal has been consumed more quickly and expires before the 2014 product.

After two hours, I tapped each chimney so that all ashes fell into the foil pan below. I poured the leftover hot coals onto the grate and moved them around with tongs to remove any loose ash. What you see in the photo below is the unburned charcoal that was too large to fall through the grate.

I placed the leftover charcoal in each foil pan and let it burn out completely and cool overnight. The next day I weighed each pan and subtracted the weight of the pan to determine the net weight of the ashes. To measure the volume of ashes, I used the “dip & sweep” method using measuring cups, similar to how you measure flour when baking.

It should be noted that the color and texture of the ashes appeared to be the same for both products. 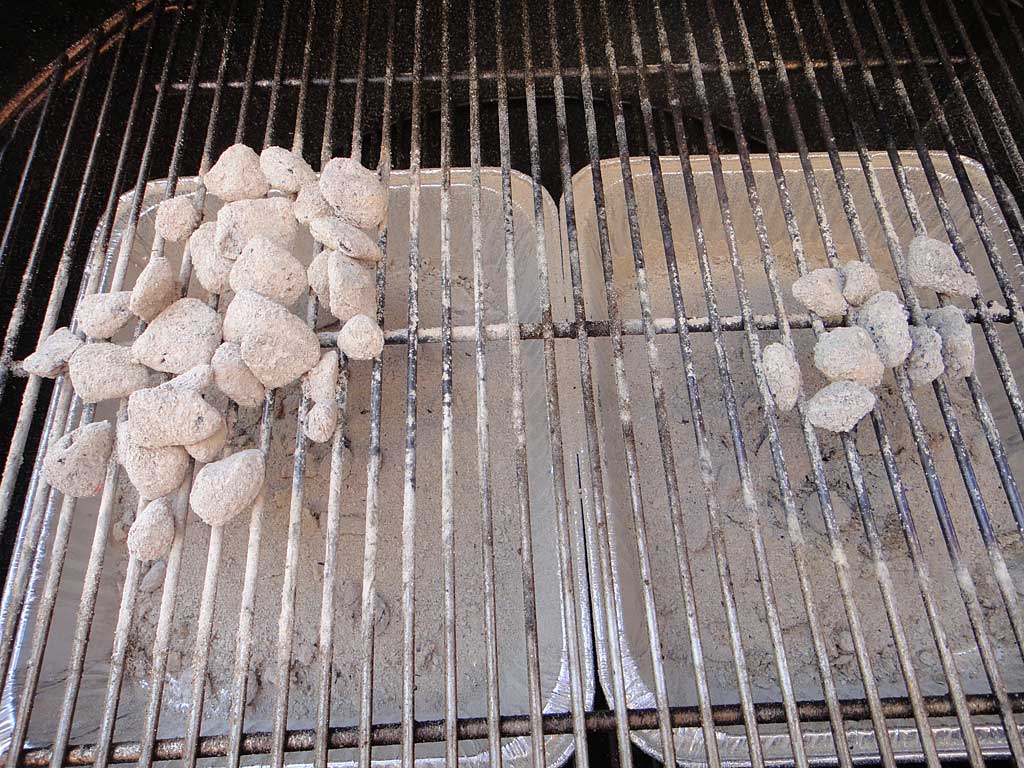 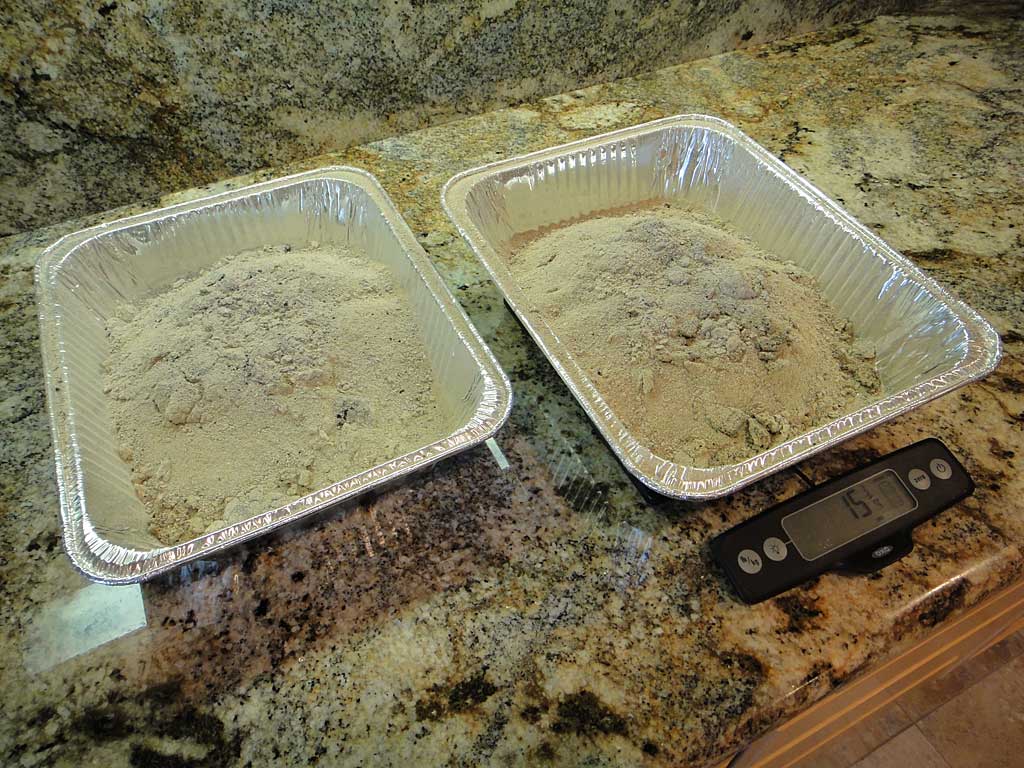 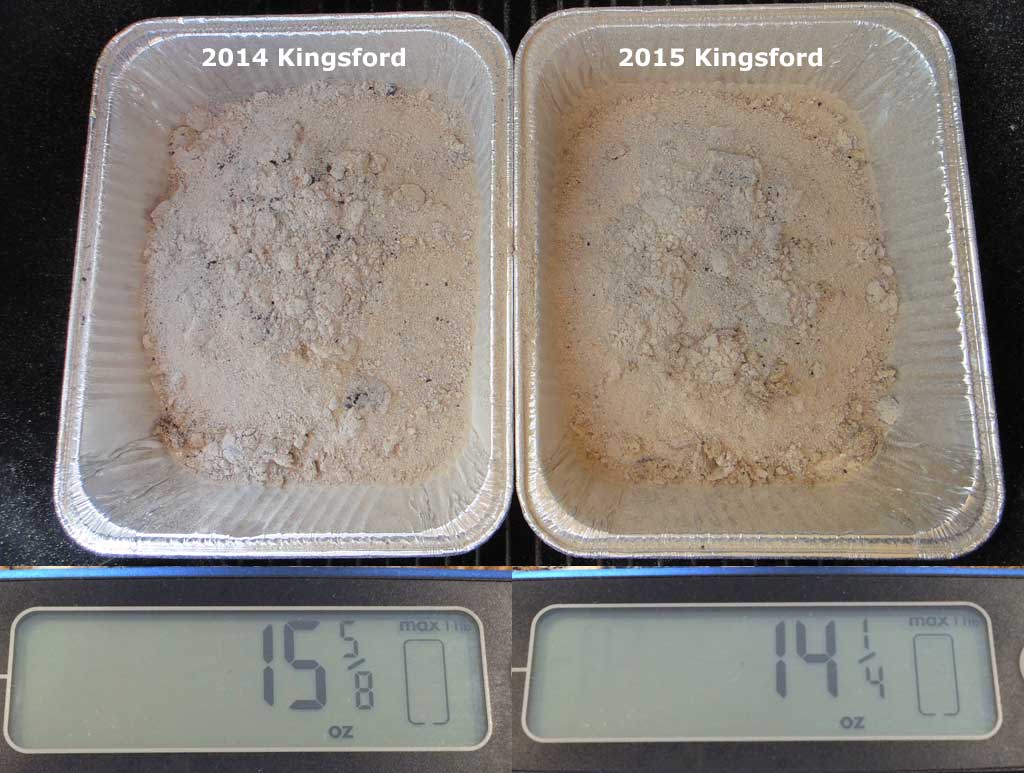 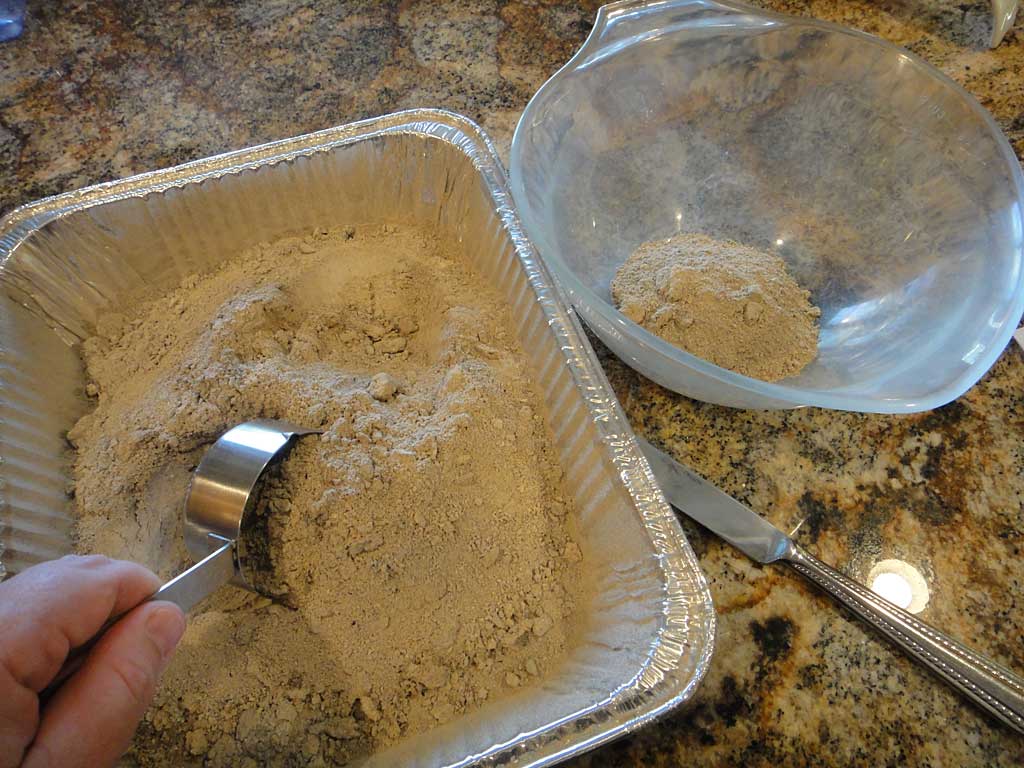 The 2015 briquets produced about 9% less ash by weight and volume than the 2014 briquets.

This table combines the results of my 2015 burn test with those of another burn test I conducted in 2009 of Kingsford Original Briquets and Kingsford Competition Briquets. The 2009 briquets used in that test were of the 2006 formula, and the 2014 briquets used in this current test are of the 2010 formula. You can see a steady reduction of weight and volume of ashes over time in Kingsford Original Charcoal Briquets. Still, the latest version produces much more ash by weight and volume than Kingsford Competition Briquets.

You should expect similar or just slightly shorter burn times with 2015 Kingsford as compared to the previous version. You may be able to mitigate this difference through careful vent control of your Weber smoker.