In Memphis, Tennessee, barbecue lovers debate which type of pork ribs are best—”wet” ribs or “dry” ribs. Wet ribs are what most of us think of as barbecued ribs: Apply a favorite rub, smoke “low and slow” for 4-6 hours, and baste with barbecue sauce toward the end of cooking. Dry ribs, on the other hand, are grilled hot and fast, basted with a vinegar-based mop, and sprinkled with rub after cooking—not before. Sauce? It’s served on the side.

Charlie Vergos’ Rendezvous in Memphis has been serving up their famous dry ribs since 1948, and they’ve shared the recipe and cooking technique on television and the Internet.

Here are some pictures I took on February 9, 2003 when I prepared dry pork loin back ribs by adapting The Rendezvous’ method to the Weber Bullet.

I purchased two slabs of pork loin back ribs weighing about 2 pounds each. I removed the membrane from each slab and trimmed off any large areas of surface fat per the instructions on the Pork Loin Back Rib Preparation page.

I decided to do one slab “dry” and the other “wet”. For the dry slab, there was no further prep. For the wet slab, I applied a generous sprinkling of Harris Ranch Barbecue Spice. Both slabs were refrigerated until just before they went into the cooker.

Preparing The Rub And Mop 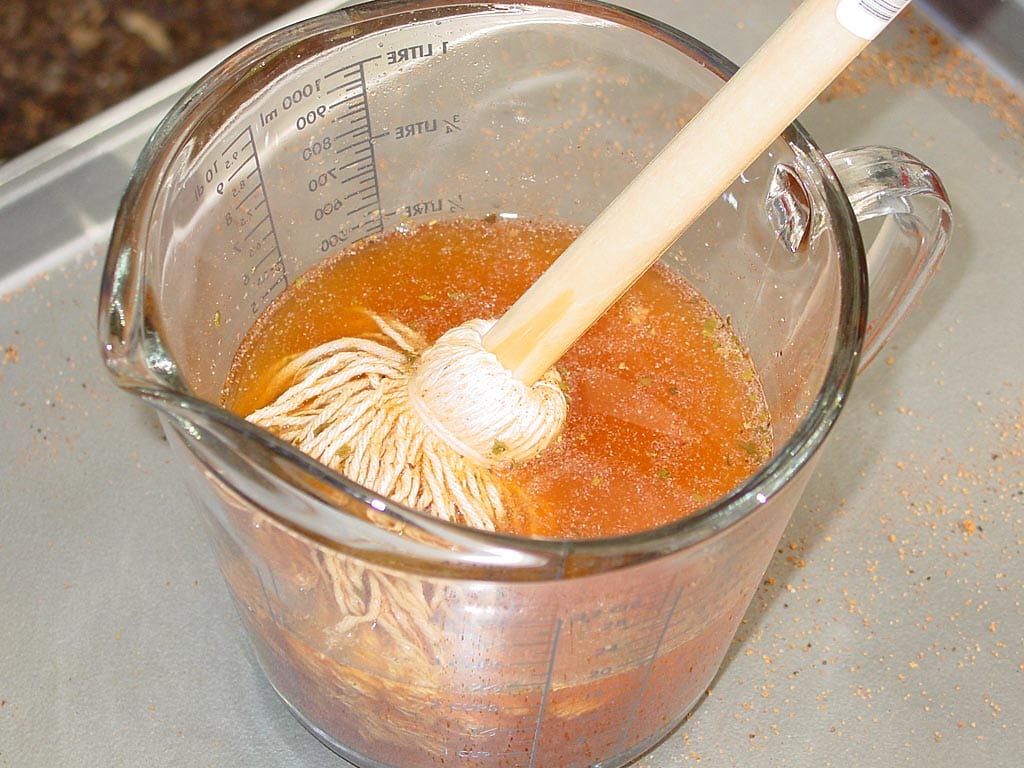 The Rendezvous Seasoning Rub recipe is listed below. If you pick up a jar of the retail version of Rendezvous rub, you’ll notice it contains MSG. So if you want that “authentic” Rendezvous flavor, add 1/4 teaspoon of Accent to this recipe.

At The Rendezvous, the basting mixture is kept in a container near the grill where it’s warmed by the charcoal fire. You can warm the mop on the stove or in the microwave before applying it to the ribs.

Combine all ingredients and mix thoroughly. Warm before applying to ribs. 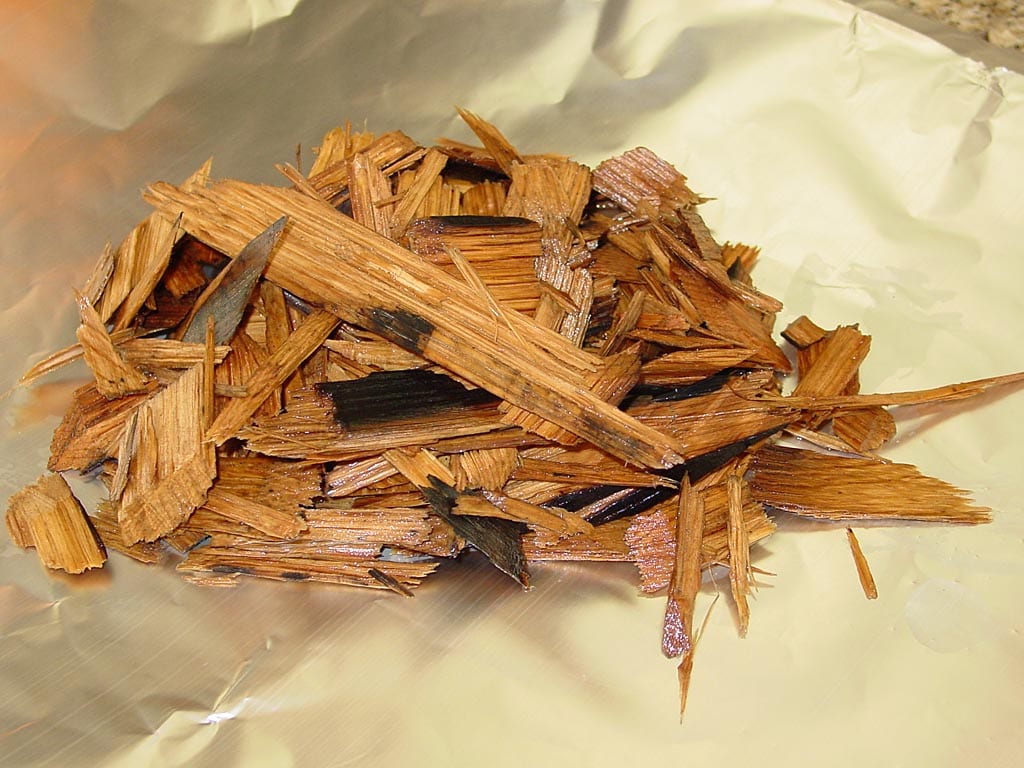 Normally I use wood chunks in the WSM, but this time I used Jack Daniel’s Wood Smoking Chips made from 100% Jack Daniel’s oak aging barrels. I liked the connection between Memphis ribs and Tennessee whiskey, and the chips would provide a quick burst of smoke for this short 60-90 minute cooking session.

Measure two heaping cups of oak chips and soak them in warm water in a Ziploc bag for about an hour. Drain the chips, then place in the center of two layers of heavy-duty aluminum foil. Fold the foil around the chips to make a flat, tight packet. Poke a bunch of holes in the top of the packet to allow smoke to escape. 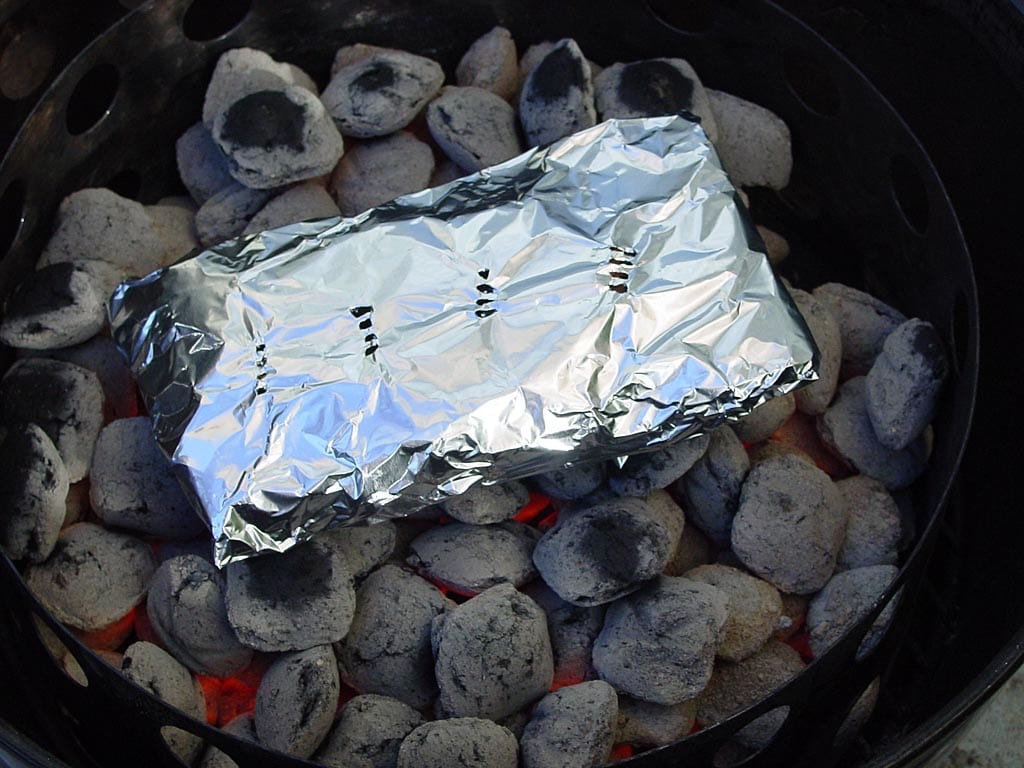 In this photo, you’ll notice that I started with only 4 holes poked in the foil using a fork. At 10-15 minutes into the cook, I wasn’t satisfied with the amount of smoke being generated, so I used a pair of tongs to tear several holes in the foil. Lesson learned: Be generous when poking holes in the foil packet.

Fire-up the cooker using the Standard Method. Light a Weber chimney starter full of Kingsford Charcoal Briquets. When fully lit, spread them evenly inside the charcoal chamber and add another 1/2 chimney of unlit briquettes on top. When all the coals are hot, place the foil packet on top and assembled the cooker.

Leave the water pan out of the WSM so the ribs cook directly over the fire, just like they do at The Rendezvous.

Ribs Go Into The Cooker 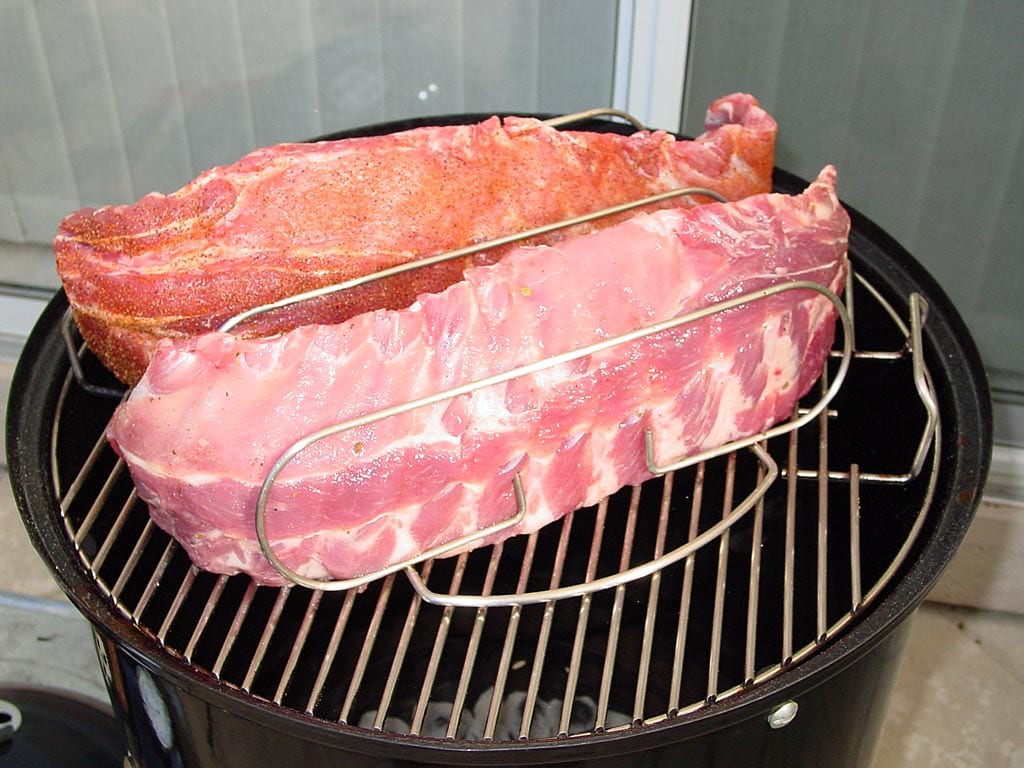 I put the two slabs on the top cooking grate using a rib rack. In this photo, the dry slab is in front. Before putting on the lid, I basted the dry slab on both sides with the vinegar mop.

Dry loin back ribs are cooked at 325-350°F for 60-90 minutes. Baste the ribs with the warm vinegar mop several times during cooking.

I went overboard and mopped the dry slab every 15 minutes. Mopping at 30 and 60 minutes would have been sufficient and would have allowed the cooker temperature to recover between basting. You’ll notice in the table below that the cooker had a hard time staying above 325°F. Less mopping and opening up the bottom vents more would have solved this problem.

(b) basted with vinegar-based mop

With 15 minutes of cooking left, I brushed some Gates Sweet & Mild barbecue sauce on the wet slab.

This photo shows how the ribs looked as they came out of the WSM. You’ll notice that the dry slab is golden brown and well cooked, but doesn’t have the rich color and shine of the wet slab. 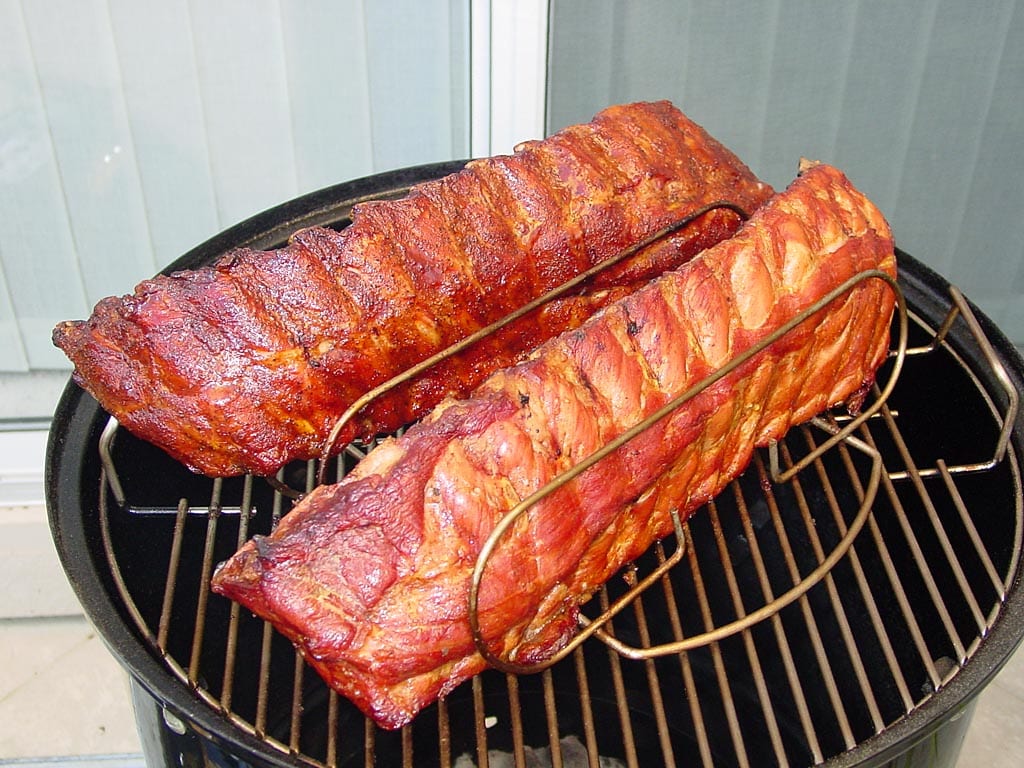 To finish the dry ribs, place on a rimmed baking sheet pan and baste the meat side one more time with the vinegar mop, then sprinkle generously with Rendezvous rub. Serve with warm barbecue sauce on the side.

For the wet slab, I brushed on one more coat of Gates sauce before serving.

This photo shows the finished ribs with the dry slab on the right.

The wet ribs tasted pretty much the way I expected. The dry ribs were quite different, however. There was no strong flavor of vinegar from the mop, but the rub tasted strong and raw, which is no surprise given that it was not cooked with the meat. The dry ribs also had more grilled flavor; perhaps the sauce diluted the grilled flavor on the web ribs. The smoke flavor from the oak chips was just right on both slabs.

Overall, I preferred the taste of the wet ribs over the dry ribs. However, I must admit that when I reheated the dry ribs a few days later and ate them with some warm sauce on the side, they were pretty tasty—maybe they got better with age!

As far as tenderness goes, I think both slabs would have benefited from cooking longer at 225-250°F instead of 60-90 minutes at 325-350°F as called for by The Rendezvous’ recipe. The ribs were fairly tender, but the meat didn’t always come cleanly off the bone.