Calling All WSM Owners! Send In Your Photos Today!

E-mail me a digital photo of you with your WSM, along with your name, city/state, and a brief comment—for example, what you like most about your WSM or some other interesting tidbit—and I’ll add you to the owner’s gallery.

All photos are welcomed, including cooking in the backyard, at barbecue contests, in snowstorms or heavy rain, or other interesting places or circumstances! 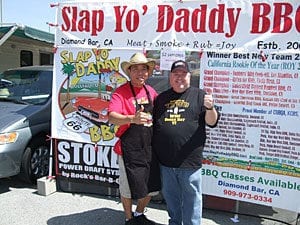 Harry Soo formed his Slap Yo’ Daddy Barbecue Team in Diamond Bar, CA in 2008, but he really broke into the barbecue scene in late 2009 when he was featured on the first season of BBQ Pitmasters on TLC television. Slap Yo’ Daddy has been very successful on the competition circuit using WSMs as their cooker of choice. Part of that success stems from Harry’s belief in “BBQ Karma”, that by sharing tips and techniques with others you get back as much as you give. “Live, Laugh, Love, and Give” and “Meat + Smoke + Rub = Joy” are two of his favorite mottos.

This photo shows Harry and me at the Morgan Hill No Bull BBQ Cook-off in May, 2010, where Slap Yo’ Daddy took the Grand Champion trophy.

Make sure to read the Q&A with Harry Soo on The Virtual Weber Bulletin Board from March, 2010. Harry shares his barbecue philosophy and all of his best techniques with TVWBB readers during this Q&A. 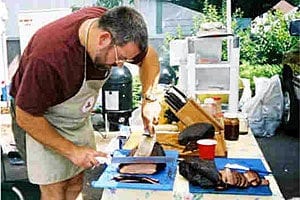 Konrad “Teddy Bear” Haskins has been a serious amateur cook for 30 years. He cooks with his wife Phyllis and daughter Amelia on the TeddyBearBBQ.com team. In 2002, their first year competing, they used WSM’s and a Weber kettle to win the 2002 Montana State Championship and finished 25 out out of 71 teams at the American Royal Invitational in 2002 with a 10th place ribbon for ribs. They so enjoyed 2002 that they quit their jobs and started a full-service BBQ catering company. 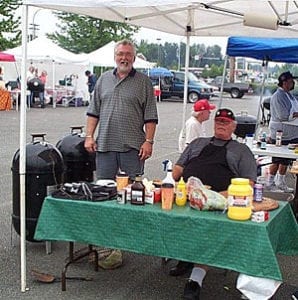 Jim Minion (left) and Jack Rogers (right) hail from Washington state. Prior to 2003, they competed as the Cardogs Barbecue Team. This photo was taken by Don Hilliard at a contest in Puyallup, WA in July, 2001.

Jim is a frequent contributor to The Virtual Weber Bulletin Board and is the man after which the Minion Method is named. He and his wife Angel operate “Angel’s Taste of Heaven”, a barbecue catering business. 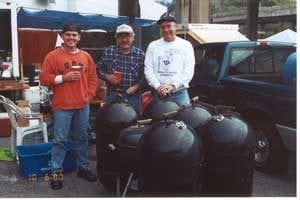 Five Weber Bullets and a Weber kettle form the barbecue arsenal of the Hi-Tech Smokers from Blue Springs, Missouri. Their motto: “Pyros with a purpose!” They had nothing but great things to say about their stable of WSMs. 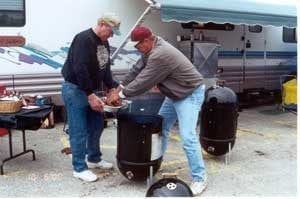 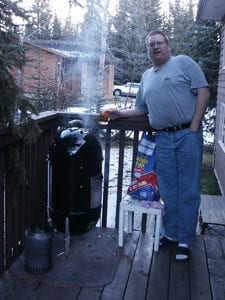 “Here’s me and ‘L’il Smoky’ on the deck smokin’ some ‘que,” writes Dan Overes from Redwood Meadows, Alberta, Canada. “Since getting my WSM in 2003, I never go to BBQ restaurants because I can get the same great taste at home.” 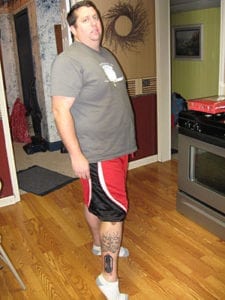 Jason Duhamell from Matoon, IL is the proud owner of two Weber Smokey Mountain Cookers. He’s so hardcore that he sports a WSM tattoo on his ankle! 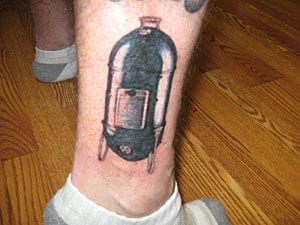 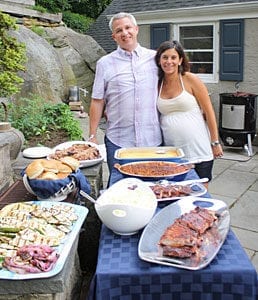 Rory Braunstein from Bronxville, NY shows-off his lovely wife with-child as well as the barbecue spread he prepared for about 20 friends for the July 4, 2011 holiday. It included a 9-pound pork shoulder, 5 slabs of spareribs, baked beans cooked in the smoker, bacon-wrapped meatballs and ABTs, coleslaw, and grilled vegetables. No one went home hungry, that’s for sure!