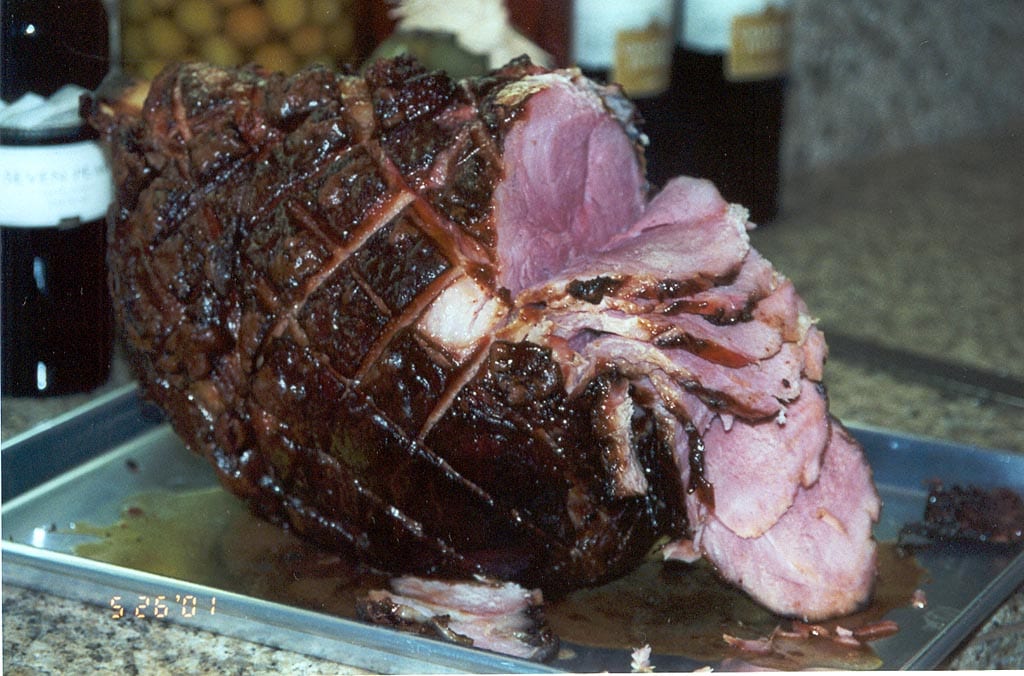 Note: I originally published this article in December 2001. It’s now April 2017 and it’s been years since I’ve seen a partially cooked or “ready to cook” ham in the supermarket. I guess consumers voted with their wallets for “ready to eat” hams over “ready to cook” hams. In any event, this recipe stands ready to help if you ever stumble across a “ready to cook” ham, and the mustard & whiskey glaze would be good on any ham.

Ham has been an Easter, Thanksgiving and Christmas favorite in my family throughout the years. However, you can enjoy ham any time of the year, as this topic illustrates.

Partially cooked hams are not as common in supermarkets as they once were, but if you come across one, you might want to try smoking it as shown here.

To learn more about the various types of ham and ham terminology like “shank end”, “ham—water added” and “ready to eat”, see the Ham Selection & Preparation page.

Here are some pictures I took on May 26, 2001 when I smoked a whole, partially cooked ham on the Weber Bullet and finished it with a mustard and whiskey glaze. 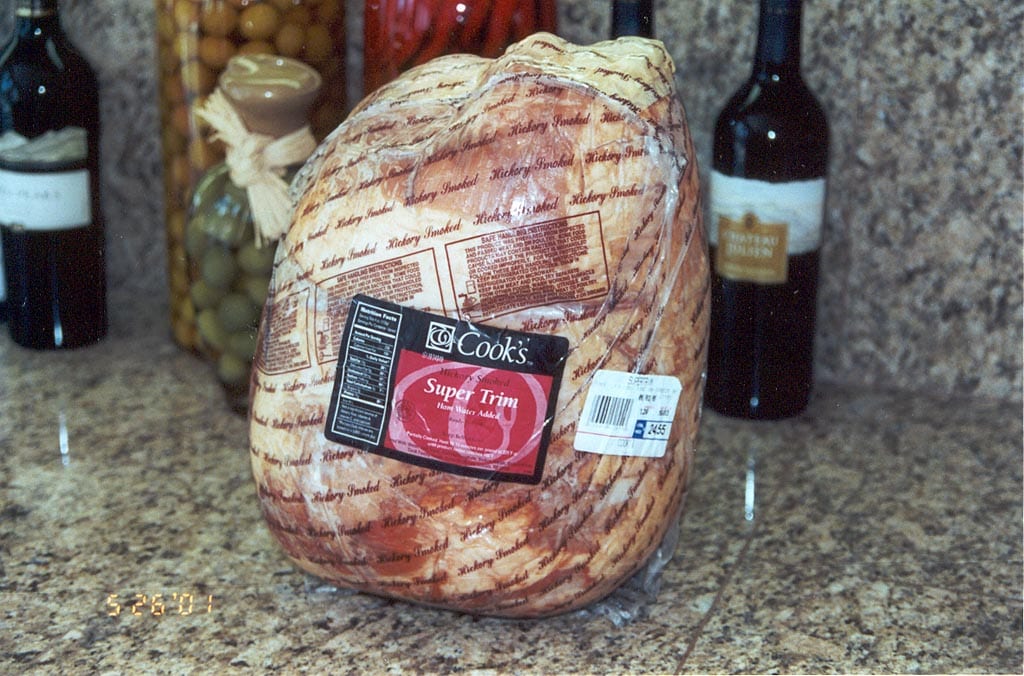 The ham shown here is a Cook’s Hickory Smoked Super Trim Whole Ham with “water added”. It’s the kind of whole ham you’re likely to find in the grocery store. The label says the ham is “ready to cook”, meaning that it’s been partially cooked and must be fully cooked to 160°F before serving. It weighed 19.03 pounds.

When you unwrap a ham like this one, you may find a jelly-like layer on the surface. Rinse it off under cold water and pat dry with paper towels.

Most whole hams you’re likely to buy at the store are well trimmed, so you won’t have to trim off any fat. If you buy a ham with the rind and fat intact, remove the rind and trim the fat to 1/4″.

Some hams won’t have enough fat on them to allow for scoring, but if your ham does, use a sharp knife to score the fat in the traditional diamond pattern before cooking. Cut the fat side 1/4″ to 1/2″ deep into 1″ to 2″ squares. This is done in part for aesthetics, but it also helps to render the fat during cooking and helps more glaze stick to the ham when applied during the last hour of the cook.

Finally, allow the ham to sit at room temperature for 2 hours before cooking.

This glaze combines ingredients from several recipes I found on the Internet…but the addition of Gentleman Jack was a spur of the moment decision on my part!

Combine ingredients and mix thoroughly into a thick paste.

Set the glaze aside in an airtight container. You won’t be needing it until the last hour of cooking. 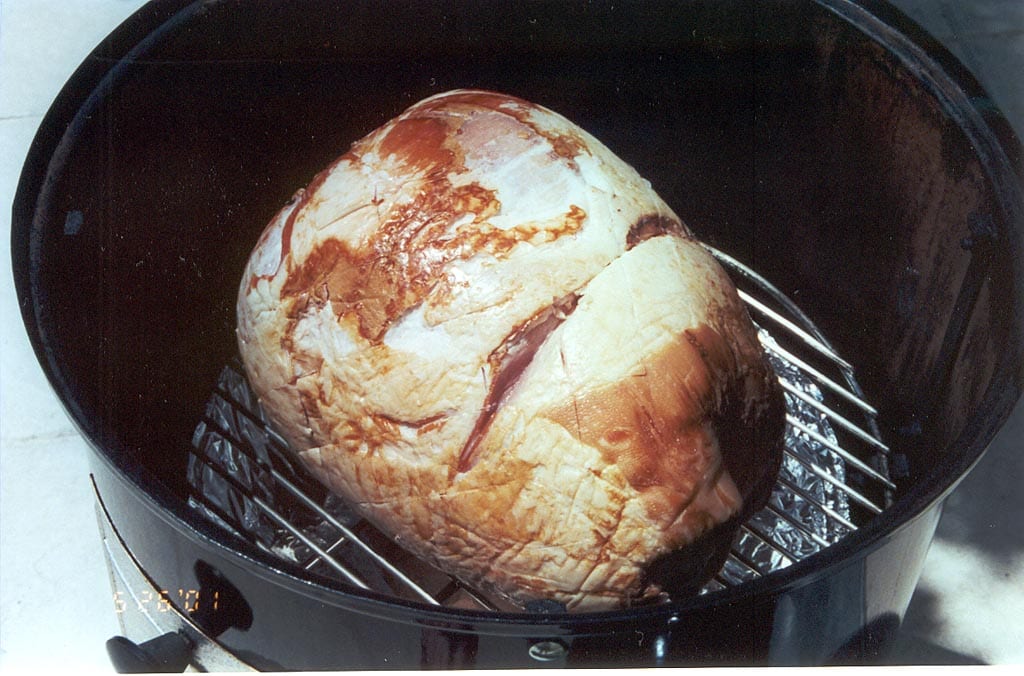 So to cook a ham of this size, you’ll need to maintain a temperature of 325-350°F for about 5 hours. This means running the Weber Bullet with a full chamber of fully-lit charcoal and no water in the water pan.

I began the process at 1:20pm by firing-up a Weber chimney starter full of Kingsford Charcoal Briquets. Within 30 minutes the coals were hot and I dumped them into the charcoal chamber and spread another full chimney of unlit briquettes over the lit coals. In retrospect, I should have filled the ring all the way to the top. As it turned out, I began to run out of fuel during the last hour of the cook and had to stir the coals and add more fuel.

At 2:10pm I assembled the cooker. I put the foil-lined water pan in place, but left if empty. I set all the bottom vents at 50% and left the top vent wide open. 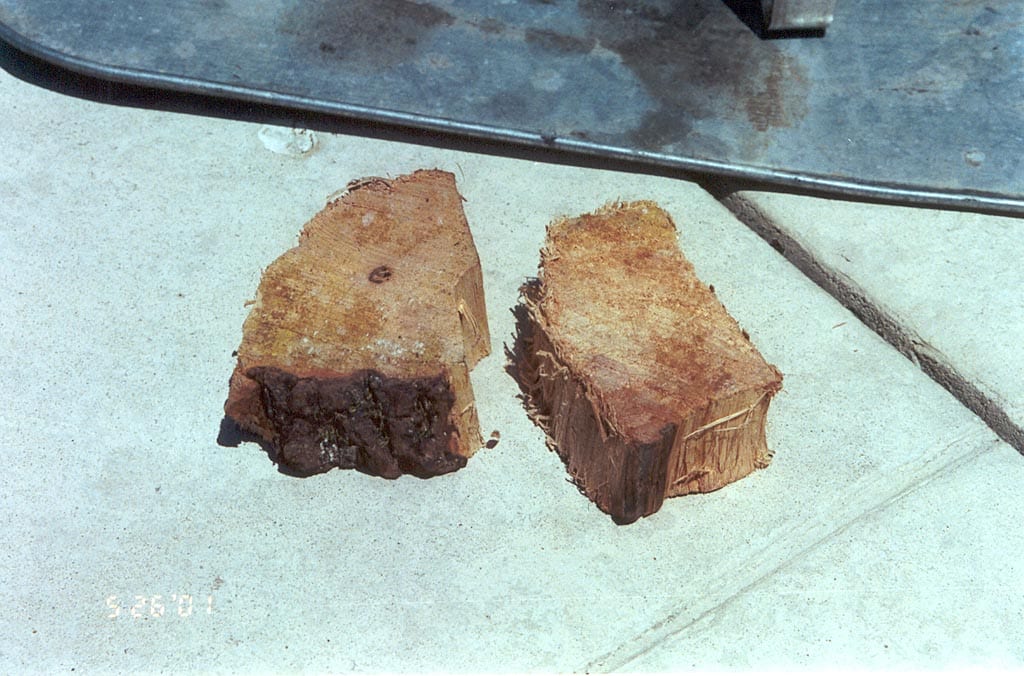 At 2:15pm the cooker registered 425°F. I put the ham on the bottom grate of the cooker (it was too large for the top grate, bumping into the lid thermometer) and added 2 large chunks of unsoaked apple smoke wood to the fire. Within 30 minutes, the cooker dropped to 300°F, so I opened all the bottom vents fully to bump the temperature up into the 325°F range.

The plan for this ham was simple: Run the cooker at 325°F until the ham registered 155°F, adding the glaze during the last hour of cooking. Residual heat would bring the ham up to 160°F during a 30 minute resting period before carving. No turning, no basting, no water in the pan, and just the single application of smoke wood at the beginning of the cook.

Here’s how the cooker and meat temperatures went during what turned out to be a five hour cook. (I did not insert the probe thermometer into the ham until two hours into the cook, which explains the lack of internal temps prior to that point.)

You can see that I added 15 unlit briquettes to the fire at 6:00pm, but they didn’t do anything to increase the heat in the cooker until sometime after 7:00pm. I should have lit them before adding them to the fire.

Whole Ham At The Halftime 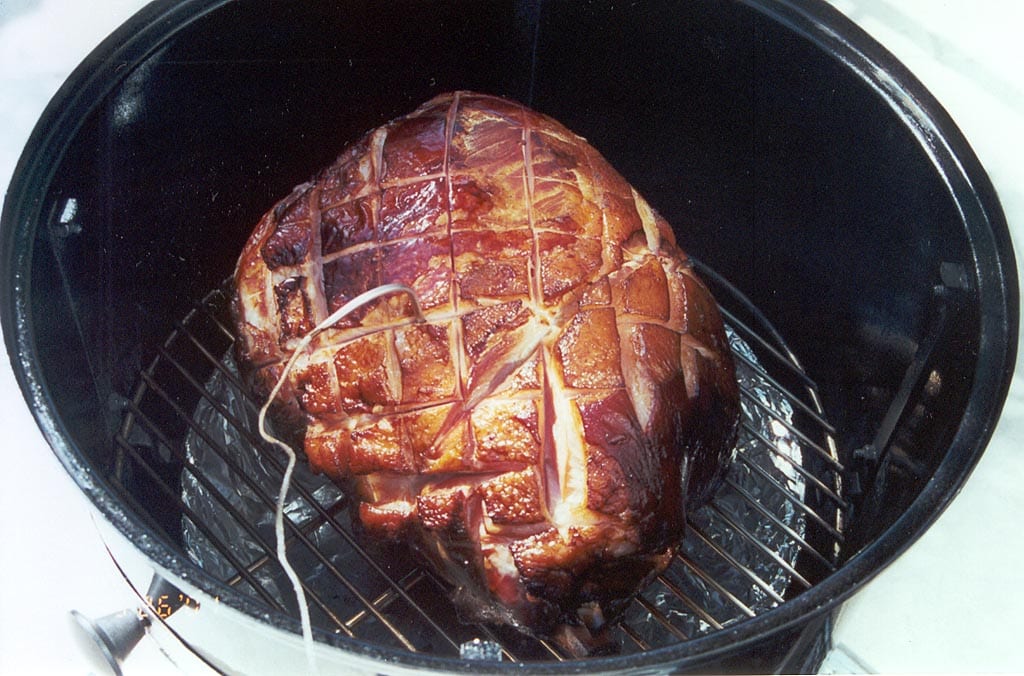 This photo shows how the ham looked at 4:15pm after 2 hours of cooking. At this point I inserted the probe thermometer into the center of the ham. Somehow I got distracted and forgot to do this step when I initially put the ham into the cooker.

At 4:45pm I noticed the sound and smell the pork fat sizzling in the empty foil-lined water pan. In my opinion, there’s no better aroma! 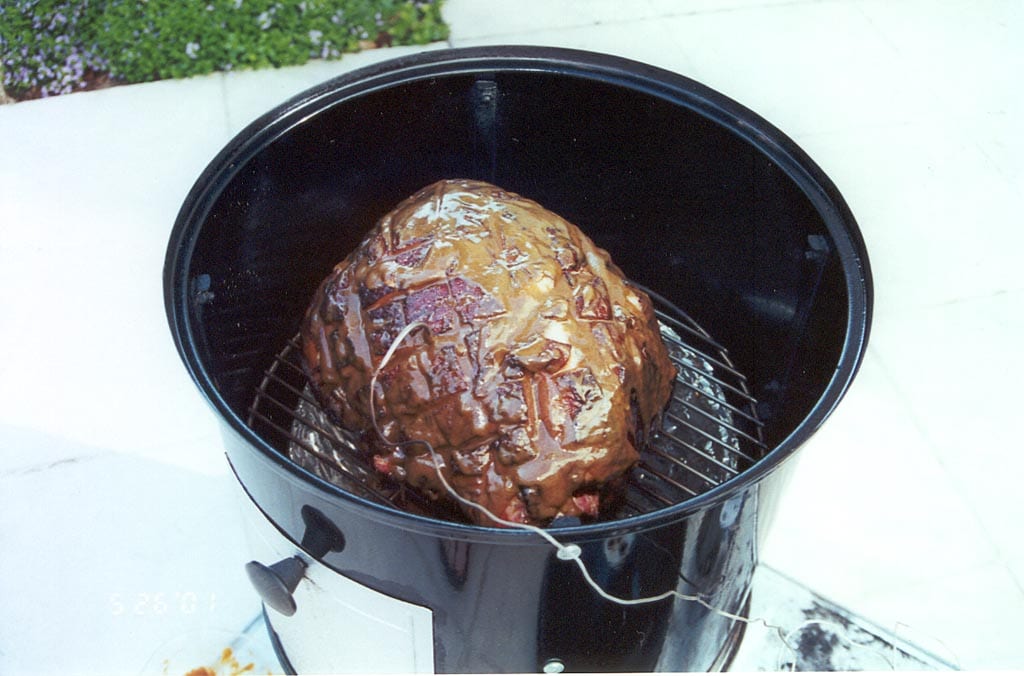 Here’s how the ham looked at 6:00pm when I poured and brushed the glaze over the scored surface. The ham took another 75 minutes to reach 154°F, at which time I removed it from the cooker. 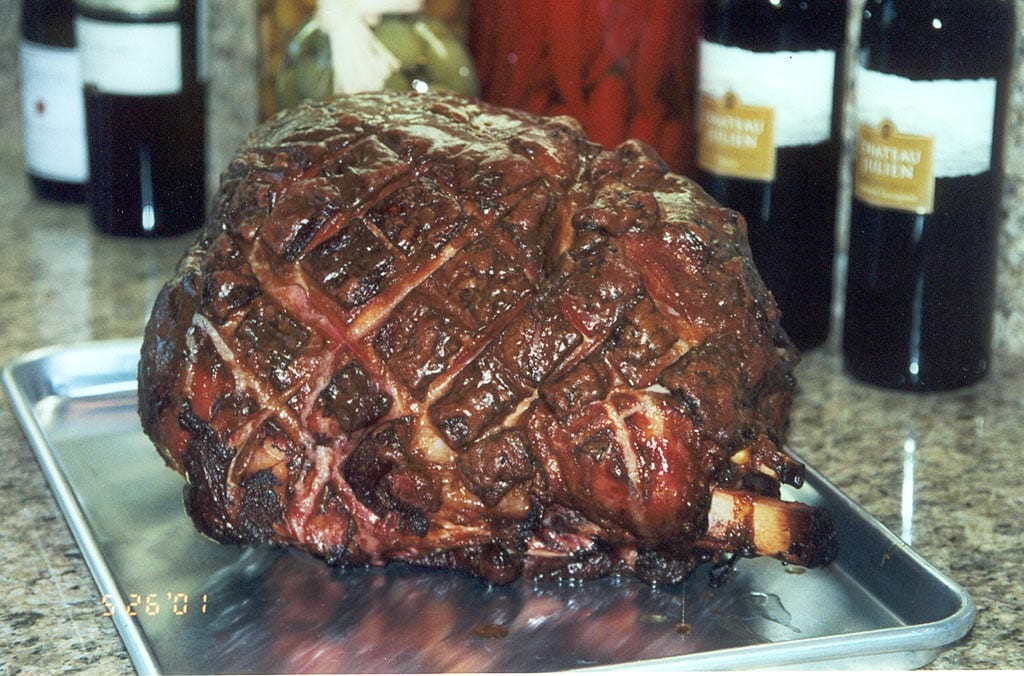 Here’s how the ham looked after coming out of the cooker. The ham rested for 30 minutes under a loose foil cover before carving.

Carving a ham this size is a little confusing, and I’m not sure I got it exactly right, but here’s what I tried to do:

The exterior of the ham had a beautiful color and the glaze added a nice flavor. The apple wood added a bit of smoky goodness to the outside of the ham, but was not overpowering and did not conflict with the hickory flavor added at the processing plant.

Since a whole ham is such a large piece of meat and is already cured and partially cooked, whatever you do in terms of seasoning, smoke wood and glaze will only affect the outside surface of the meat—your efforts are not going to have an impact on the flavor inside the meat.

But that’s OK. Cooking a whole ham on the WSM is a lot of fun and the subtle smokiness you’ll add will make that ham just a little bit more special. And if you do this during the holidays, you’ll free up the oven in the kitchen for other uses.

So get out there and cook a whole ham on the Weber Bullet. I hope you enjoy yours as much as I enjoyed mine!