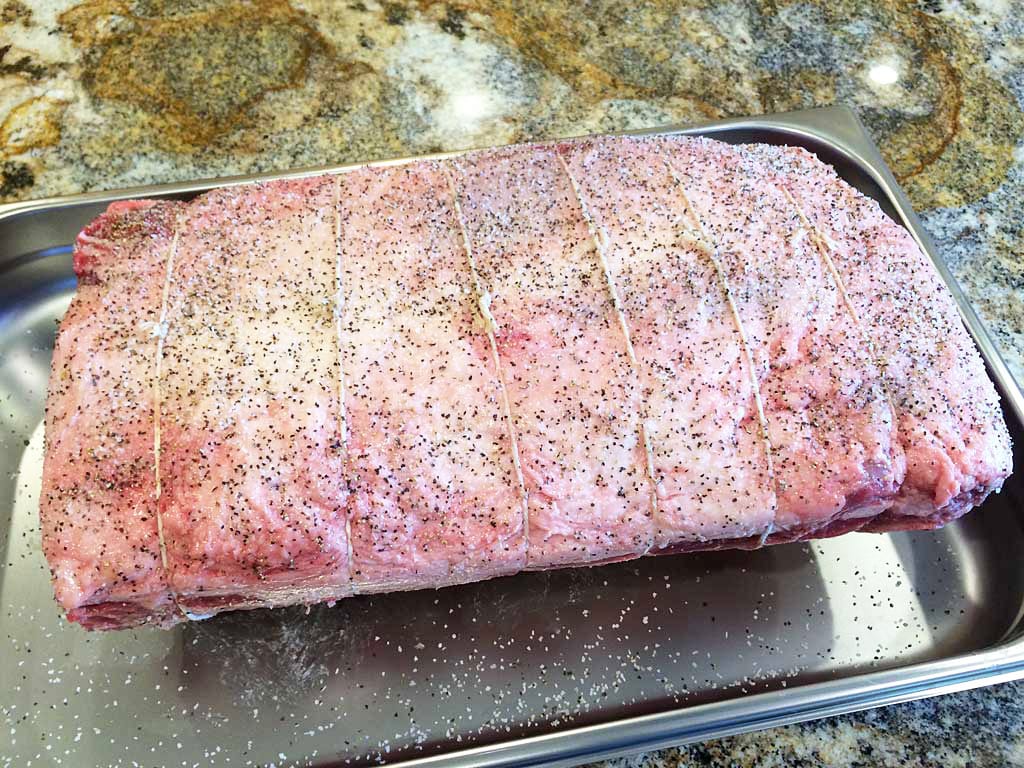 Standing rib roast is a great holiday treat that’s easy to prepare and will feed an army of hungry family and friends. Why not splurge and give it a try this year in your Weber Bullet? All you need to do it tie the meat, apply salt and pepper, and you’re ready to go.

Here are some pictures I took when I prepared this roast on January 3, 2015. An earlier version of this article was published based on a roast I cooked on November 23, 2007.

Most whole 7-bone standing rib roasts are too big to fit on the WSM 18.5″ cooking grate. When shopping for a roast, bring along a measuring tape and try to buy one that measures 17″ or less diagonally. Otherwise, you will have to cut off part of the roast. If you go this route, remove one bone’s worth of meat from the end with the shortest bones. This leaves the best meat intact as part of the larger roast. The removed portion can be cooked alongside the roast or saved for grilling another day. 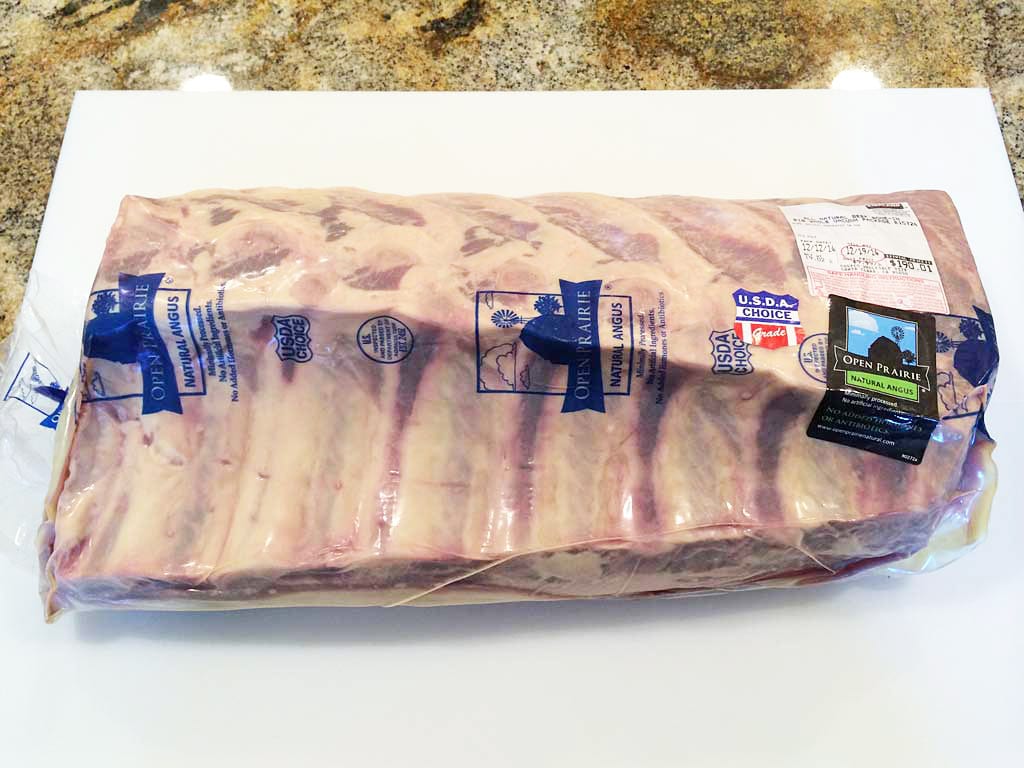 The whole roast was too large for the WSM, so I removed one bone’s worth of meat from the large end of the roast, as shown below. 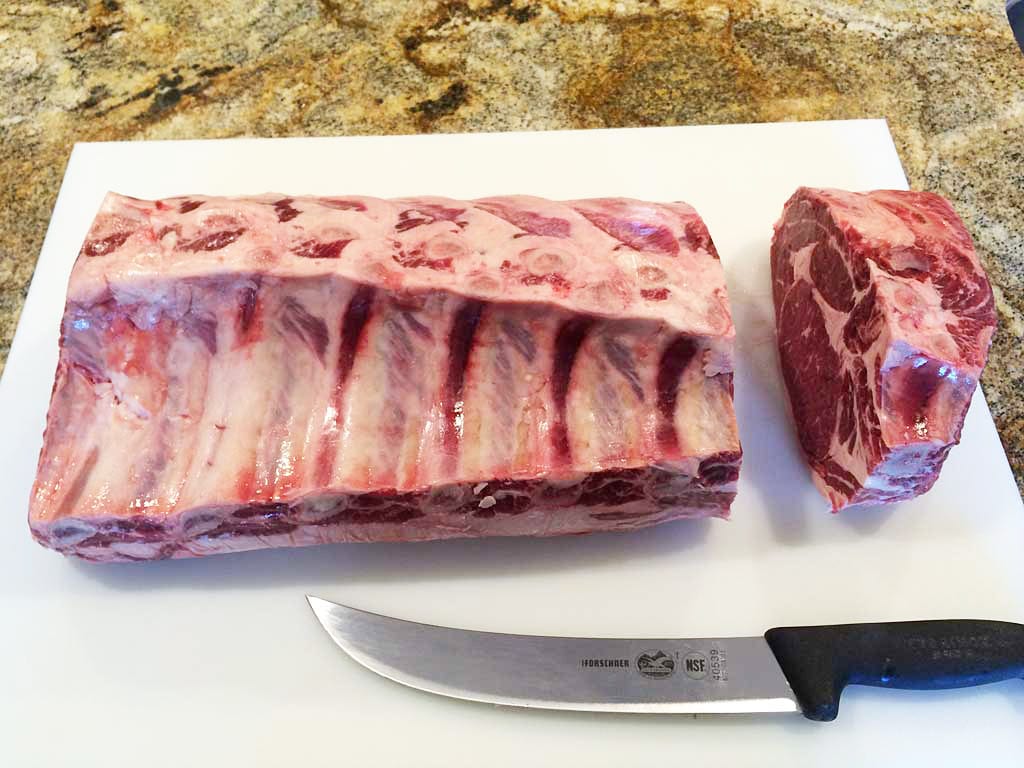 This photo shows what’s called the First Cut or Short End of the roast, which has more meat and less fat. 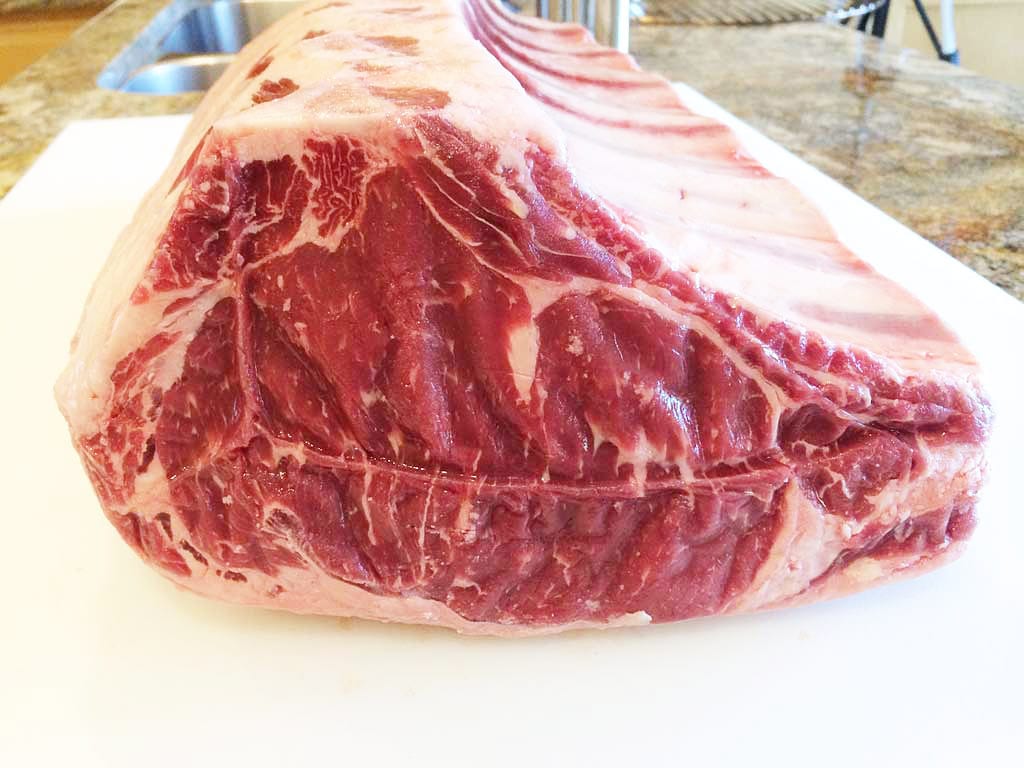 This photo shows what’s called the Long End of the roast, which has more areas of fat within the meat. This is the end from which I trimmed a piece to make the roast fit into the cooker. 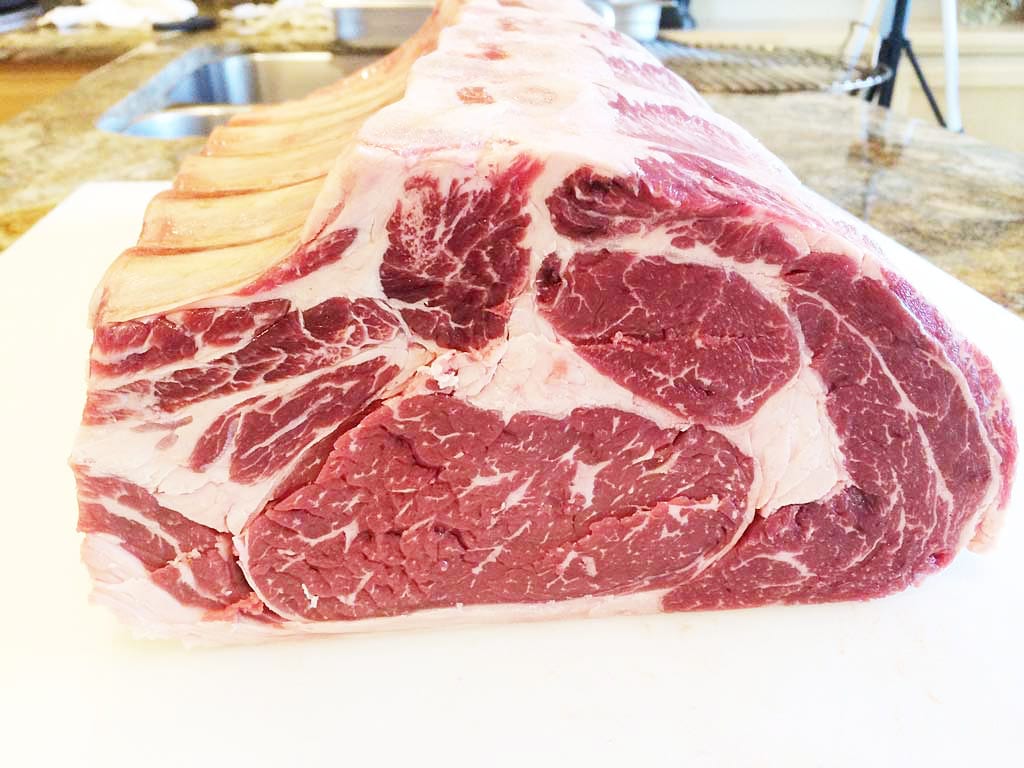 This photo shows the now 6-bone roast, weighing about 17.5 pounds, turned bone-side down and tied with kitchen twine at each bone. 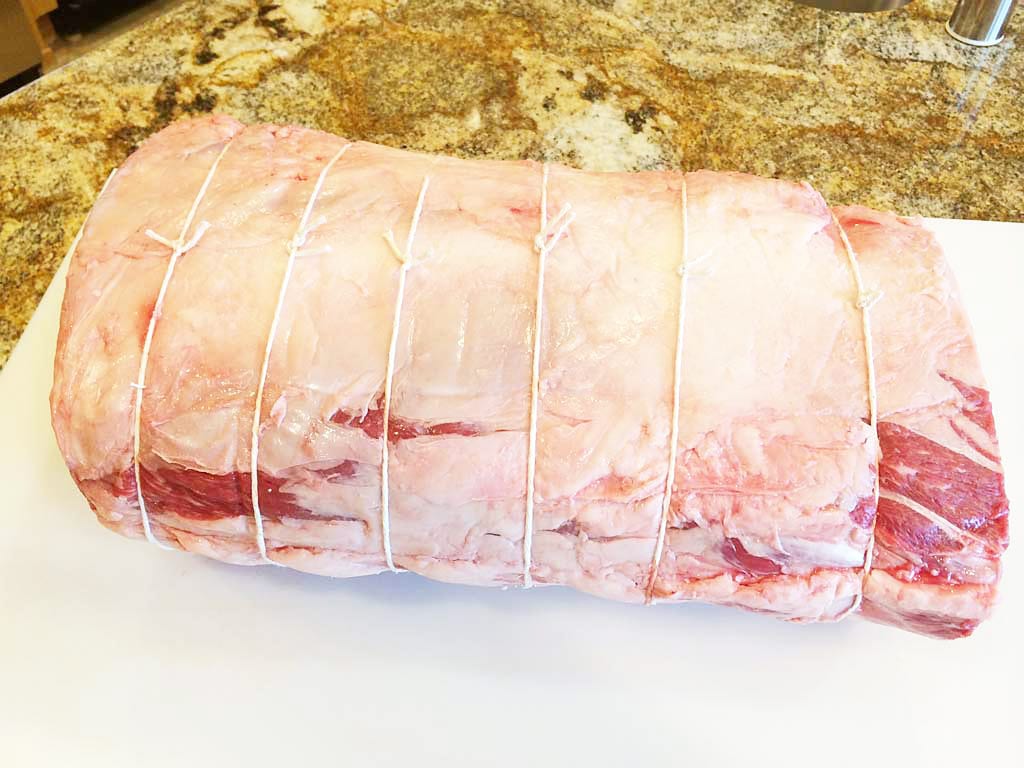 This video demonstrates how to tie a roast. Click on the video to play. 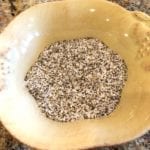 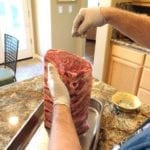 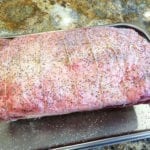 Standing rib roast is such a fine cut of meat that it needs nothing more than salt and pepper before cooking. Sometimes the simplest preparations are the most delicious.

Pat the meat dry with paper towels. Brush all sides (except the bones) with a light coat of olive oil or vegetable oil, then sprinkle heavily with the salt/pepper mixture. Pat with your hands to help the cracked pepper adhere to the meat.

Cover loosely with plastic wrap and let sit at room temperature while you fire-up the cooker. 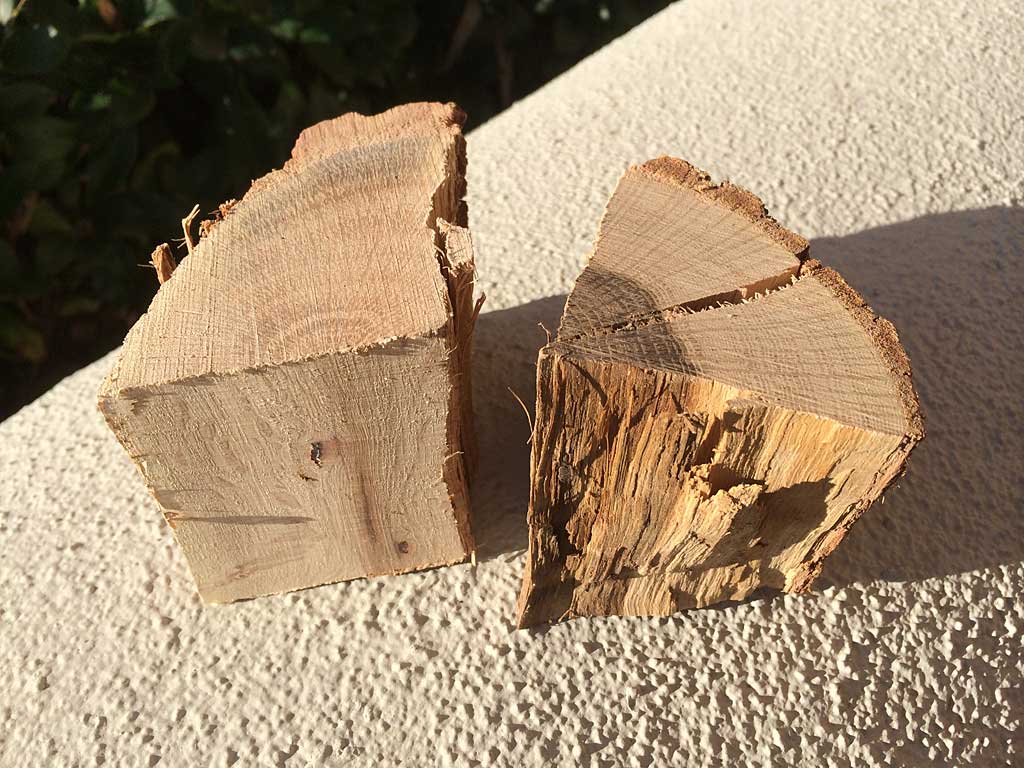 Use 2 chunks of dry oak wood. Each chunk should be about the size of your fist. Pecan, apple, or another mild fruit wood can be used if oak is not available. 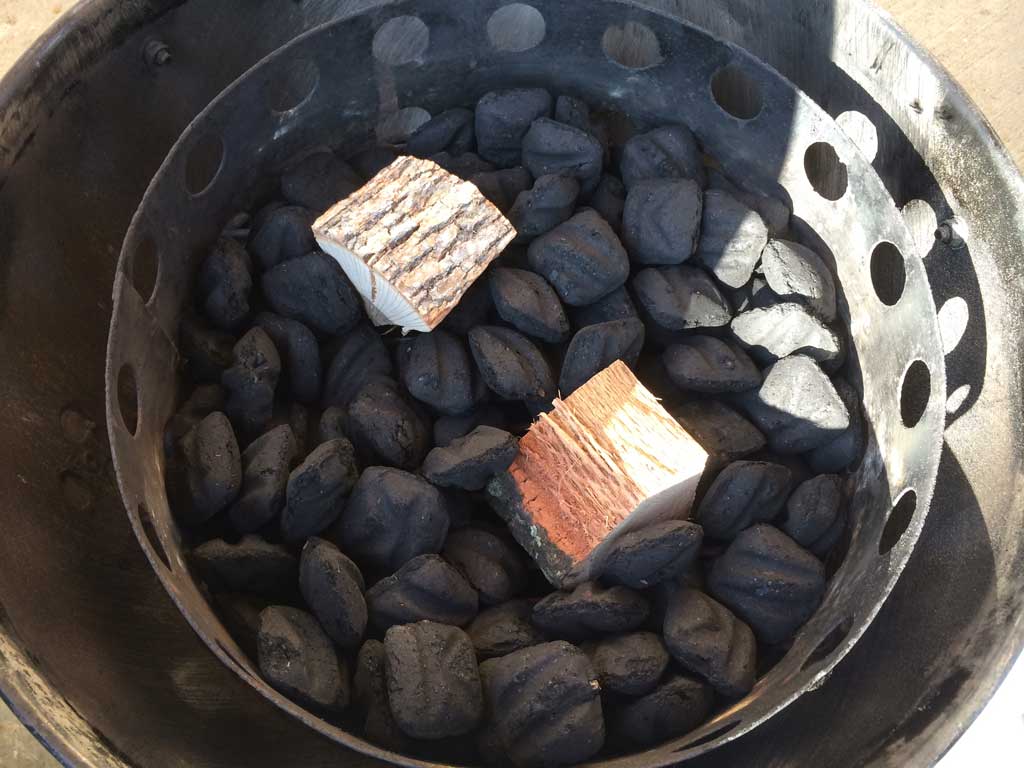 Cover the outside of the water pan with wide, heavy duty aluminum foil and place it in the middle cooking section.

Insert the middle cooking section into the charcoal bowl and fill the water pan from above with hot tap water. Put the top cooking grate in place, then place the roast bone-side down on the grate. 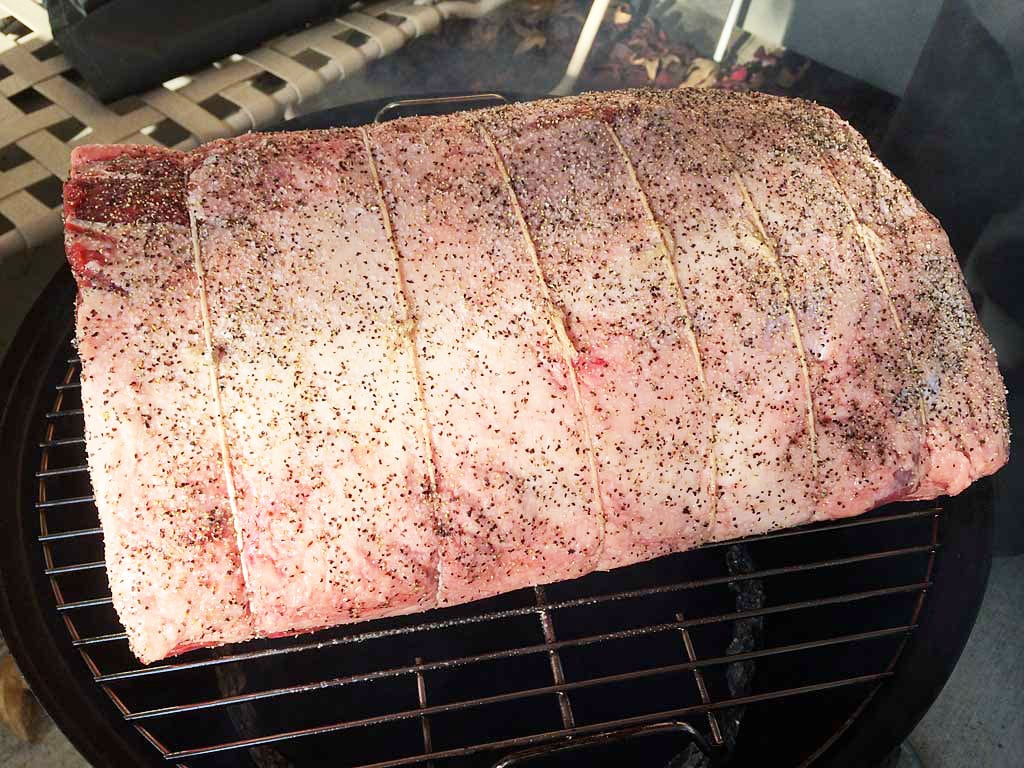 Insert a probe thermometer in the center of the roast to monitor the internal meat temperature during cooking. Place the lid on the cooker.

Smoke The Rib Roast, Then Sear In Oven 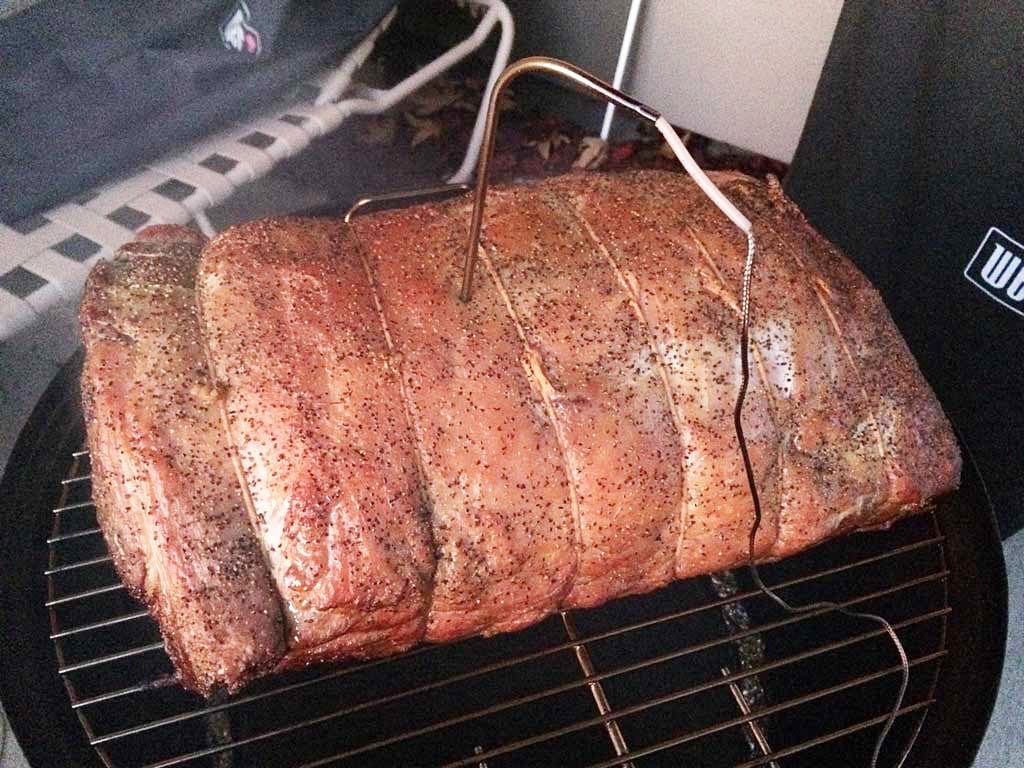 Cook the rib roast at 225-250°F until the internal meat temperature is 10°F below the final internal temp you want to achieve. See Standing Rib Roast Selection & Preparation for a chart of doneness internal temps. 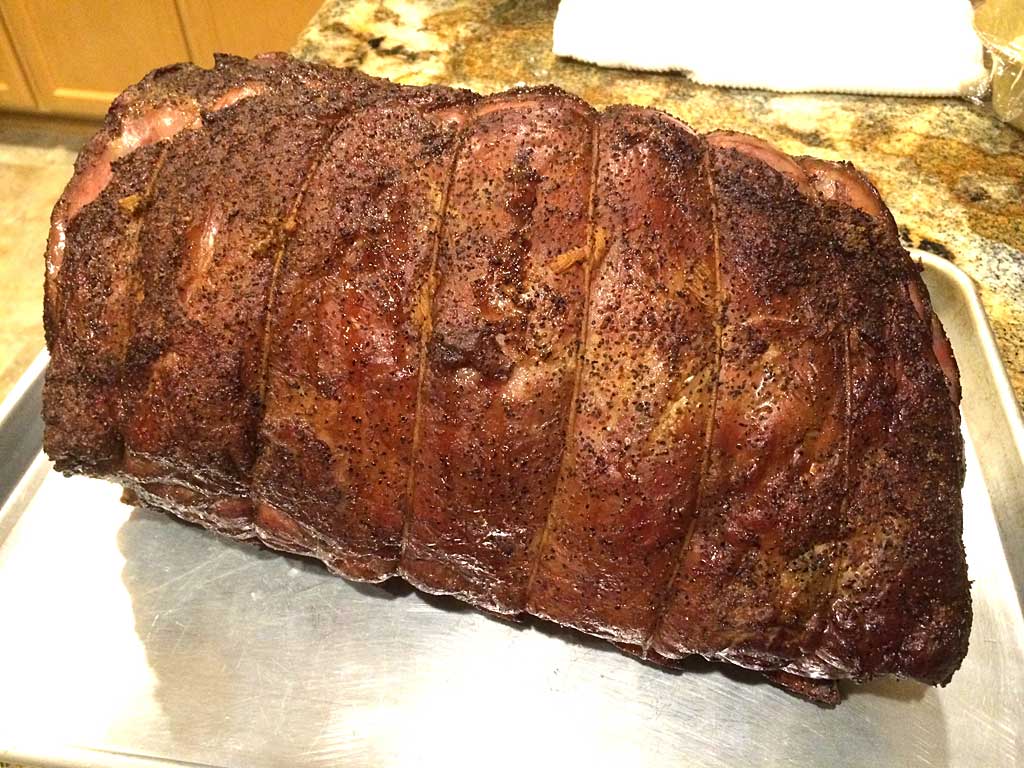 Move the roast to a rimmed baking sheet pan and place it in a preheated 500°F oven for 5 minutes to sear the exterior surface. 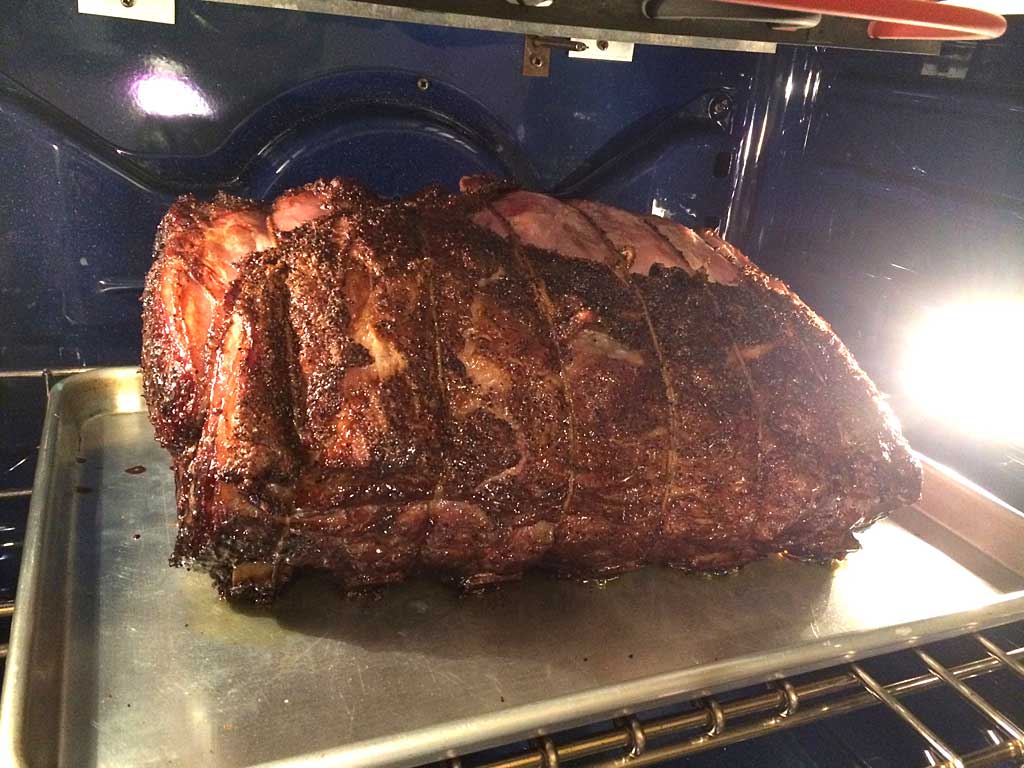 Remove the roast from the oven, cover loosely with aluminum foil, and let the meat rest for 15 minutes before serving. 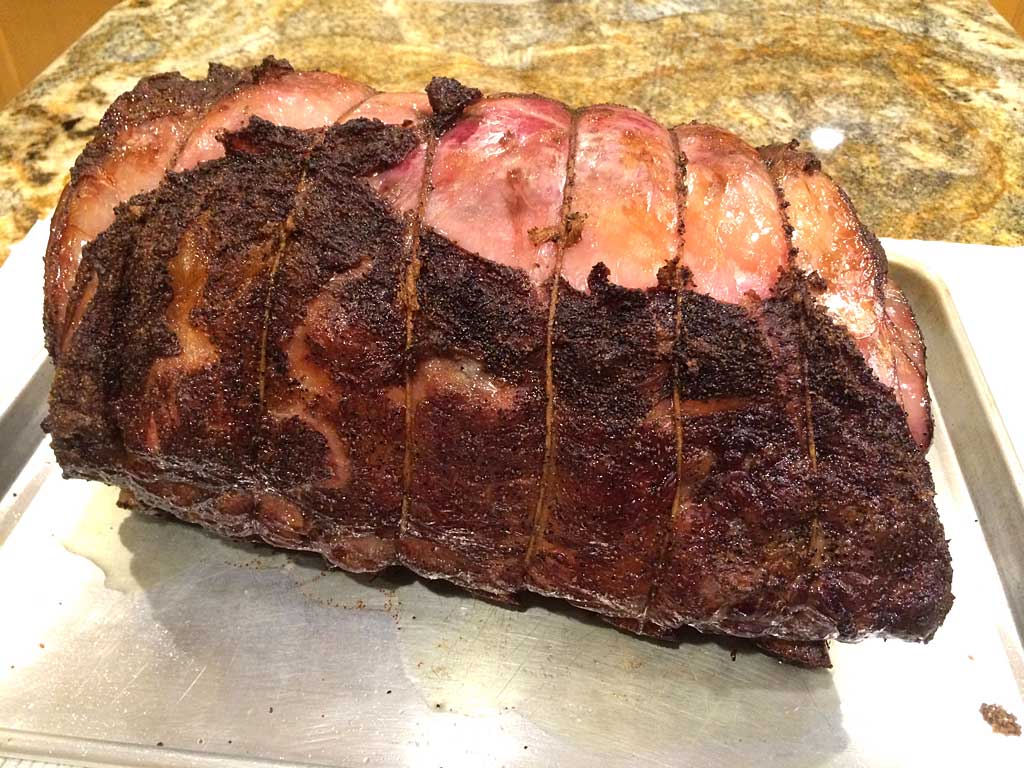 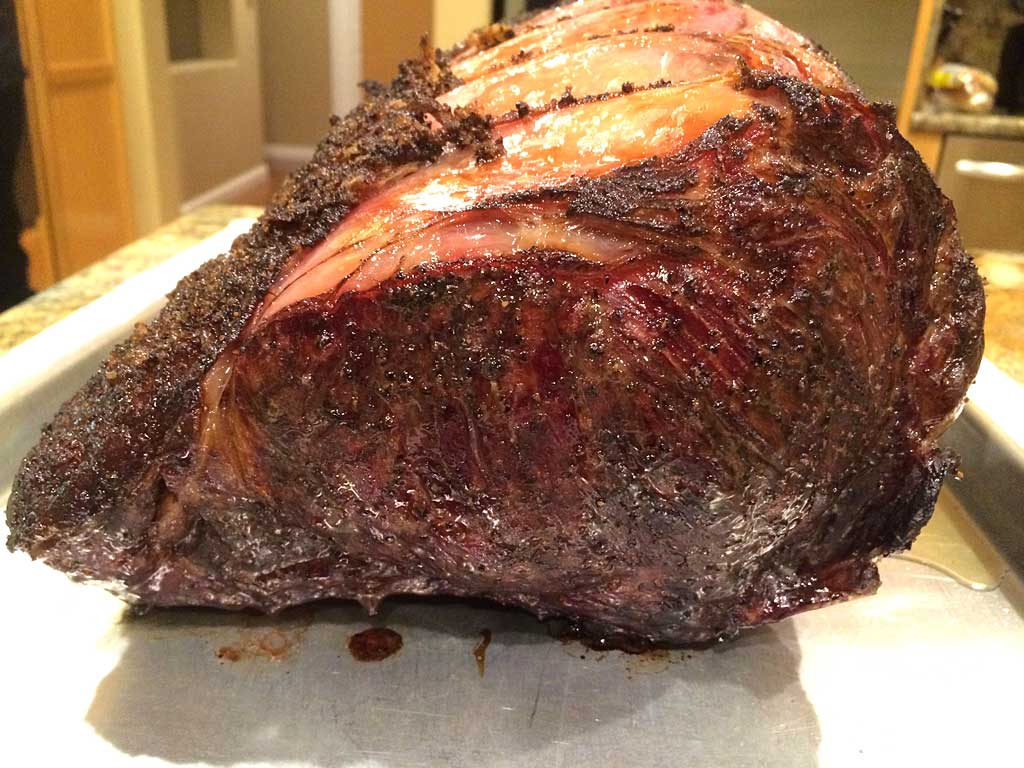 Residual heat in the meat will cause the internal temp to rise 5-10°F during the rest and the juices will redistribute and stabilize within the roast.

Alternatively, after searing you can hold the roast at serving temperature for up to an hour by wrapping it tightly with two layers of foil and placing it in an empty cooler.

For this roast, I cooked the meat to an internal temp of 125°F for medium rare, then seared it for 5 minutes and rested it for 15 minutes before serving.

There’s no need to baste or turn the meat during cooking.

Here’s how the cooker and internal meat temperatures went during the cooking process.

For easier handling, divide the roast into two halves by cutting between bones 3 and 4. 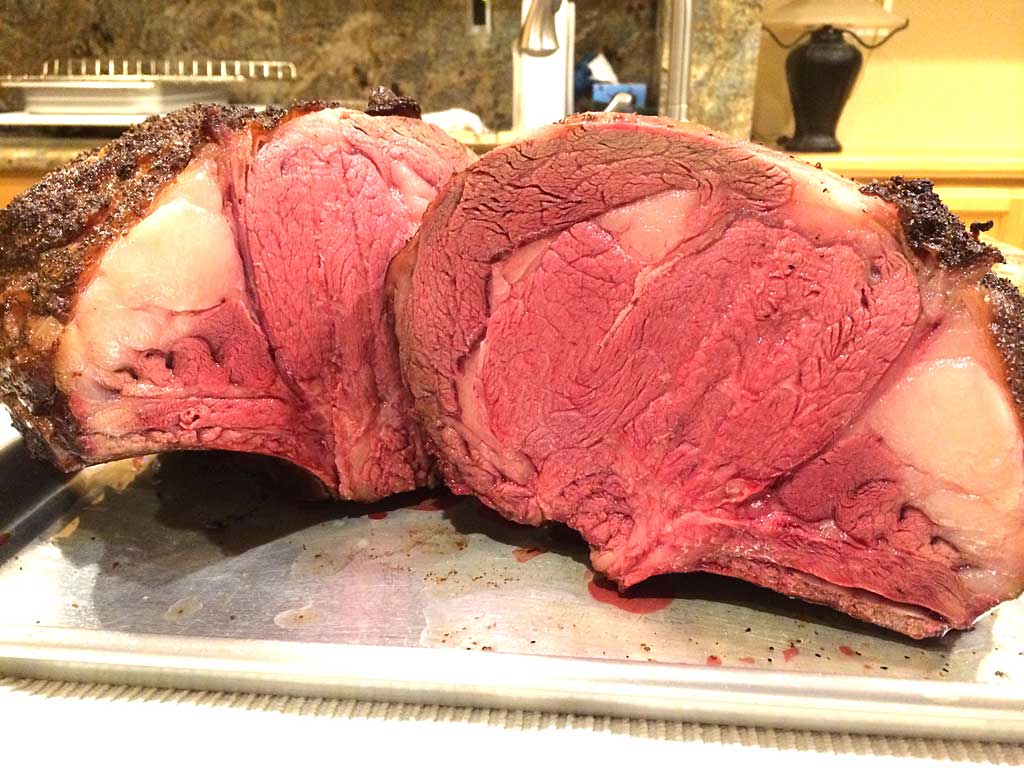 To carve, remove the twine and roll the roast onto its side so the bones are pointing straight up. Using the bones as a handle, cut downward close to the bones using a sharp boning knife or an electric carving knife to remove the bones. Click here to see the cutting process as a GIF.

Next, place the roast flat on the cutting board and carve slices 1/2″ thick or to your liking. Cut the bones into individual pieces and serve them along with the roast…or save them for yourself!

This photo shows the medium rare interior after resting for 15 minutes. 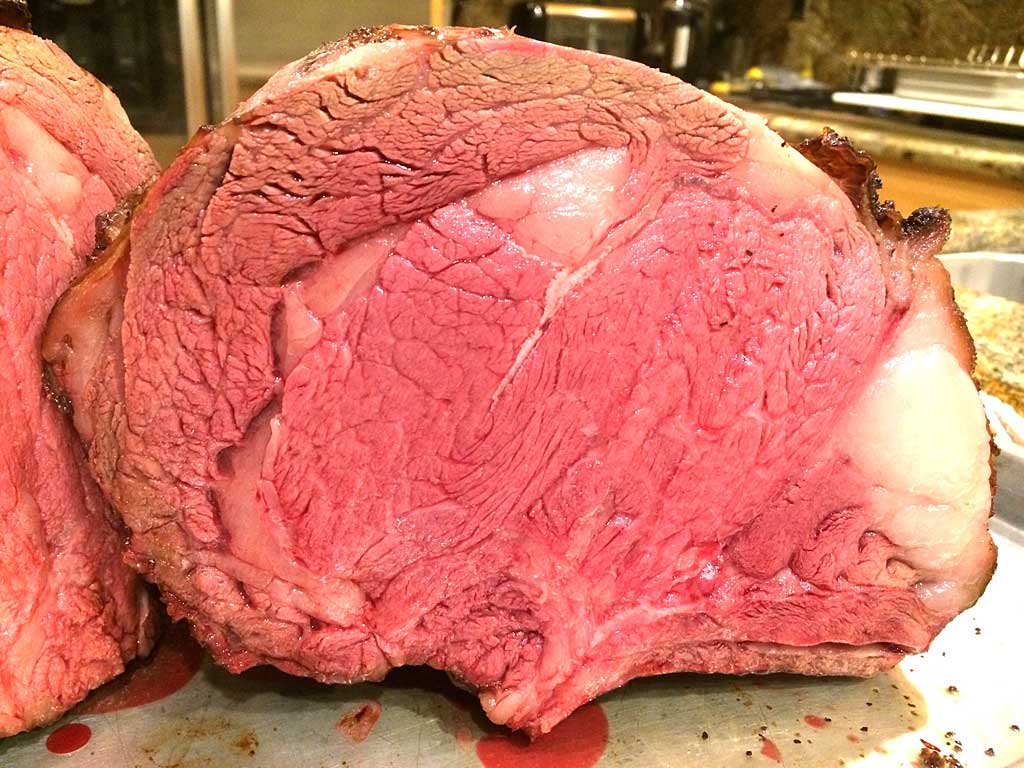 This photo shows a slice of rib roast served with creamy horseradish and au jus. 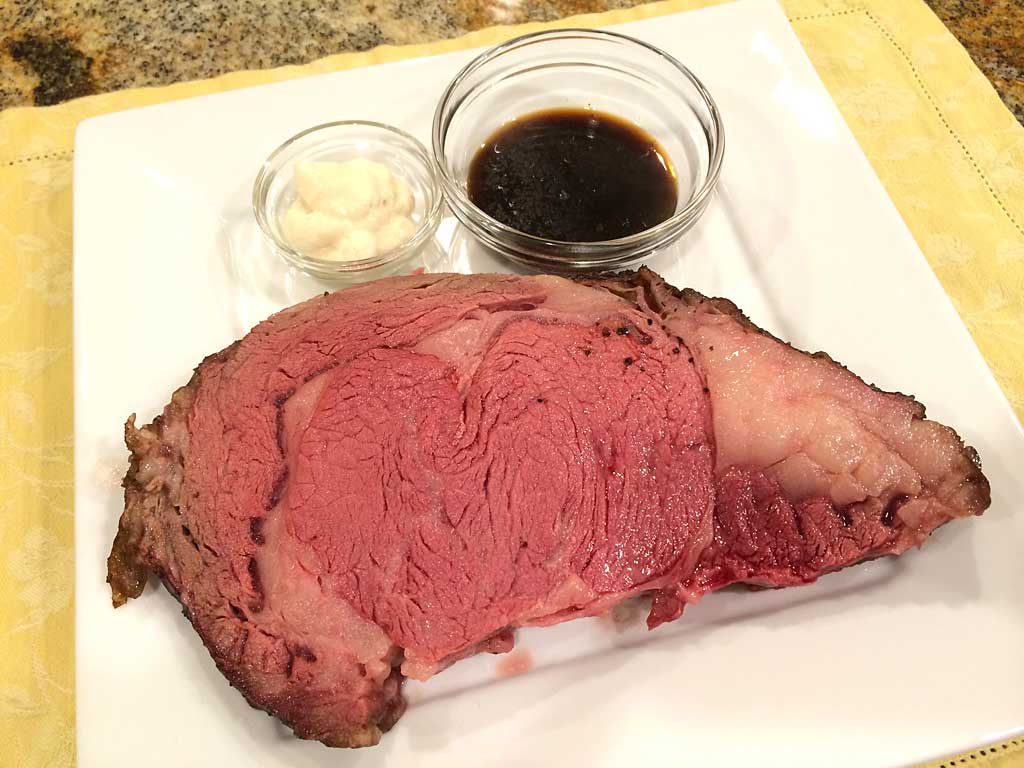 These photos show a bowl of sliced rib bones and rib bones served with rice and green beans. 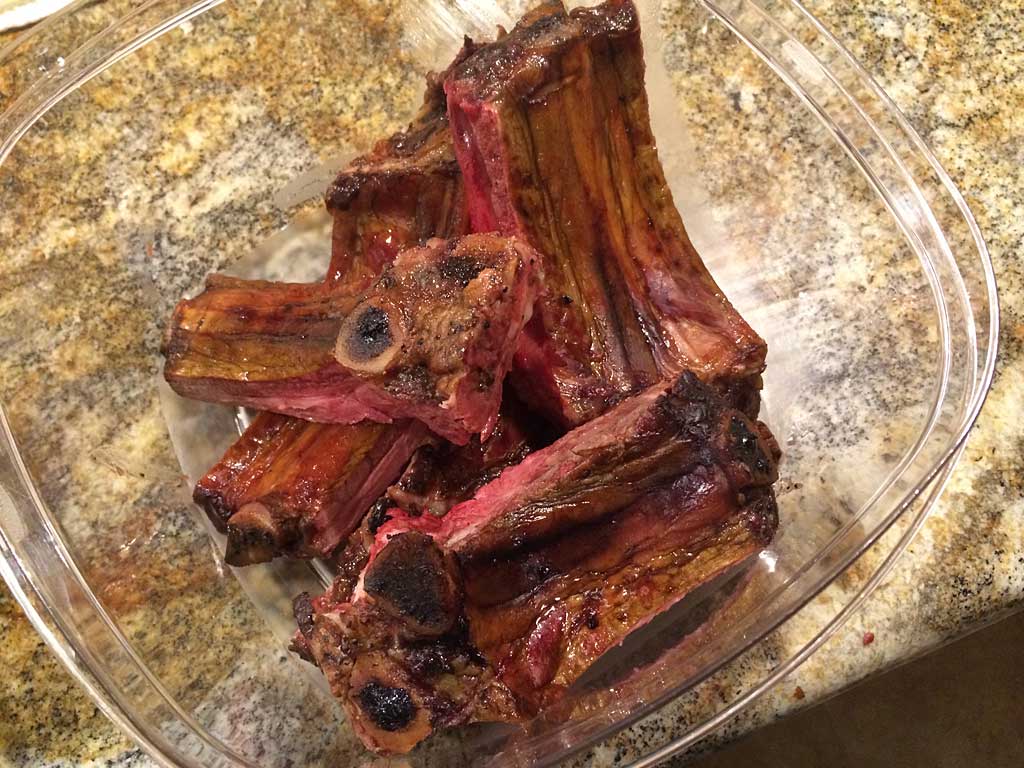 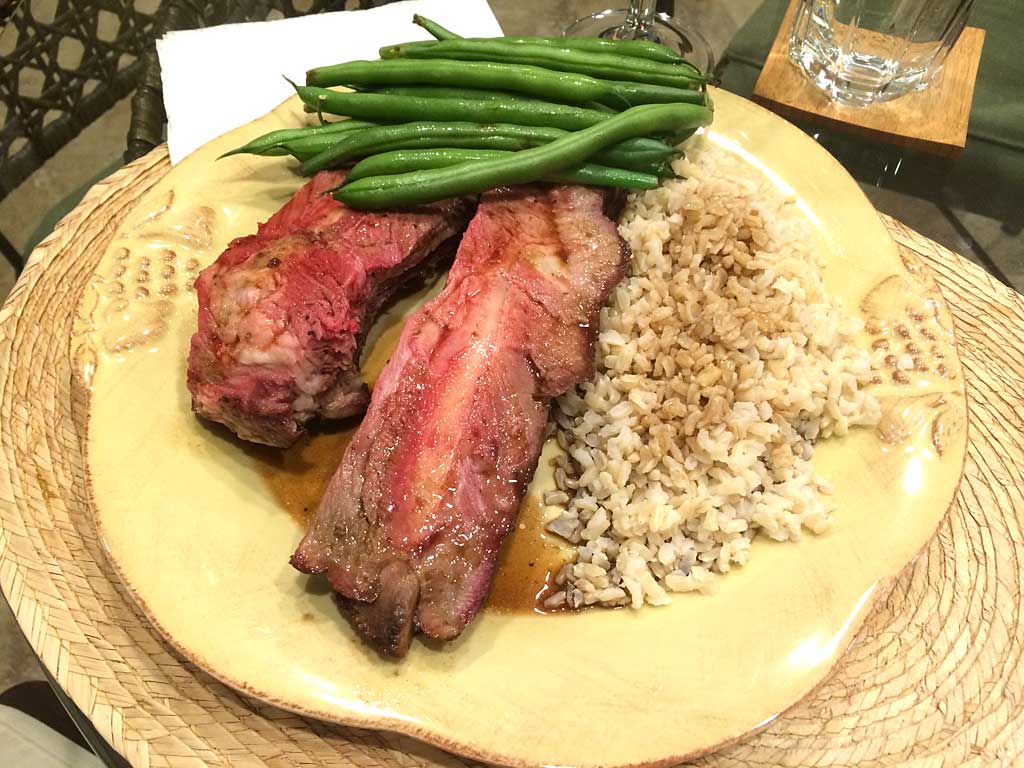 This roast was very well seasoned and intensely flavored. The oak wood provided just the right amount of smoky goodness and the slightest smoke ring. Of course, the meat was very tender and juicy.

You’ll notice in the photos above that the roast had a dark, crusty exterior layer that looked great before searing, but the exterior cracked and shrank during the 5 minute oven sear. This doesn’t matter once the meat is sliced and served, but if you’re concerned about looks, you might consider skipping the sear step to avoid the possibility of exterior cracking and shrinkage. 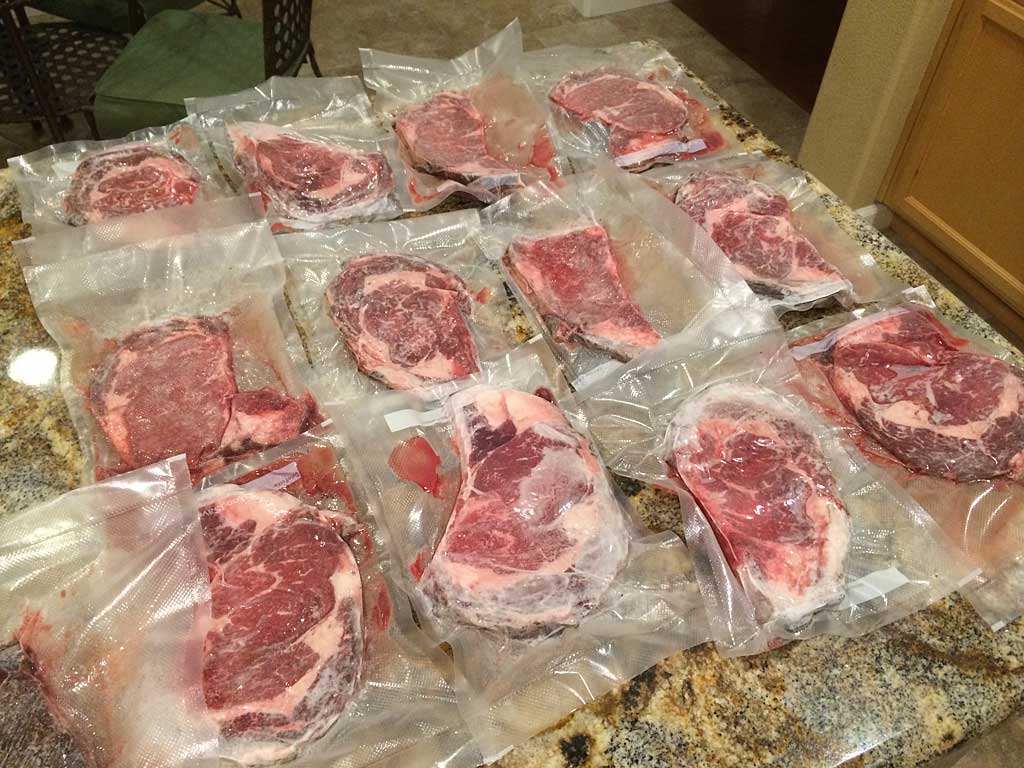 Even if you’re serving a whole standing rib roast to a big group of family and friends, you’re likely to end up with leftovers. I like to slice the leftover roast into serving portions and vacuum pack each portion in FoodSaver bags. These can be frozen for months then thawed and reheated gently in boiling water right in the bag, or at 20% power in the microwave on a plate covered with plastic wrap. It tastes almost as good as the day you originally cooked it. 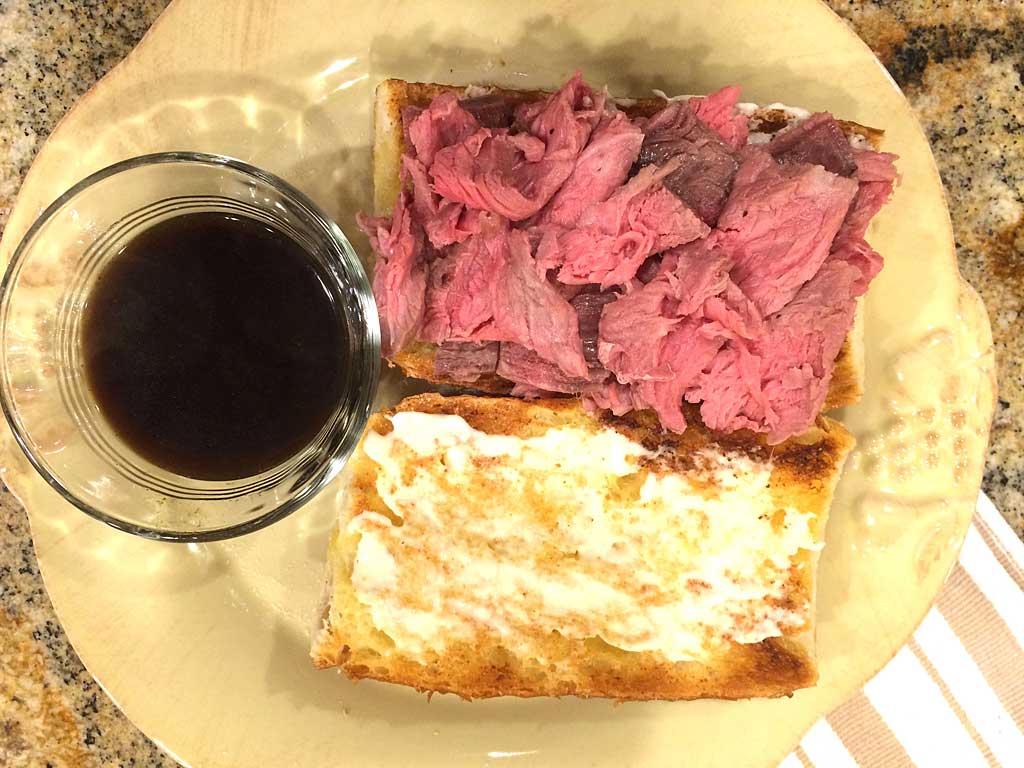 Whisk the heavy cream for 1-2 minutes until thickened but not yet holding soft peaks. Fold in horseradish, salt, and pepper. Transfer to a serving bowl and refrigerate 30-60 minutes before serving.