Beef is dry aged to make it more tender and flavorful. During dry aging, enzymes in the meat go to work on the connective tissue and muscle fibers, resulting in increased tenderness. Also, a significant amount of moisture evaporates from the meat, resulting in more intense flavor. At the end of this article, I’ve included links to more information about aging meat that you might find interesting.

I was inspired to dry age a standing rib roast after watching Alton Brown do one on Good Eats on the Food Network. Experts like Brown and Cook’s Illustrated magazine say that you can safely dry age beef in your refrigerator at home for 3-7 days, while others like Bruce Aidells suggest that you leave dry aging to professional butchers.

If you choose to dry age a standing rib roast, you accept the risk of ruining an expensive cut of meat, or that you won’t like the resulting flavor. Some people who are not familiar with the taste of dry aged beef describe it as “gamy” or “musty”. Others call it “buttery” or “rich”. In the end, it’s all a matter of personal preference.

In any event, you’ll need to start with a high-quality standing rib roast. You’ll find info on how to choose a good one in the Standing Rib Roast Selection & Preparation article.

Here are some pictures I took when I prepared this roast on December 6, 2003. 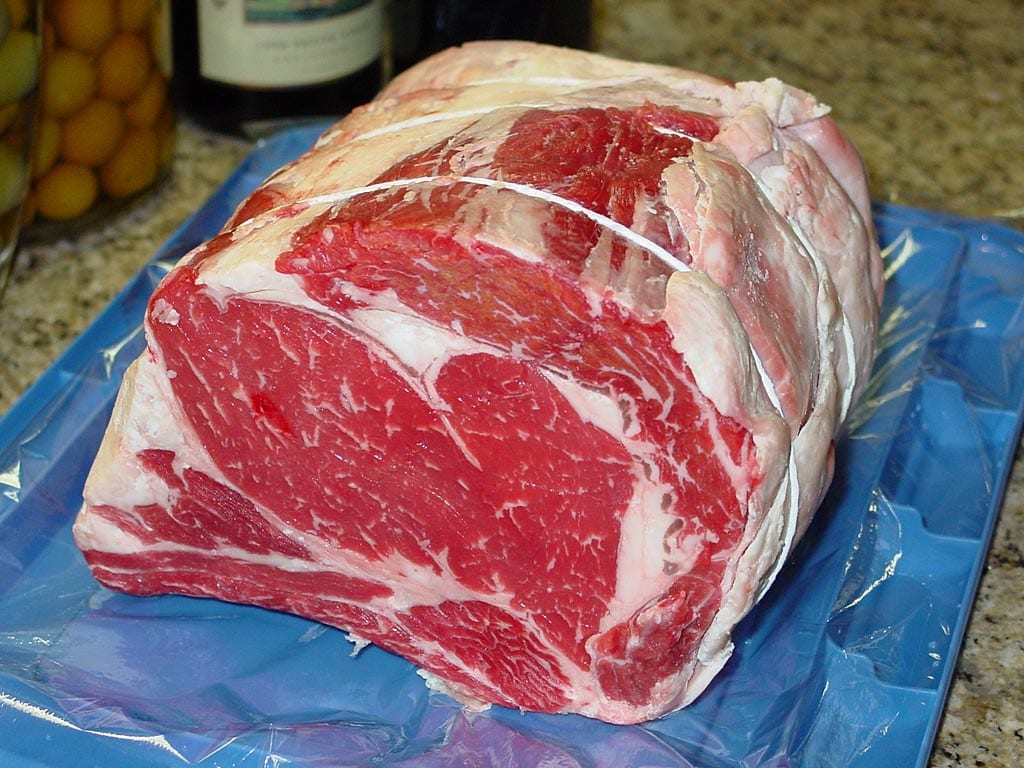 This is a three-rib USDA Choice standing rib roast cut from the small end (ribs 10-12), weighing 7.73 pounds. It came already tied by the butcher, and I left it that way during aging.

This video demonstrates how to tie a roast. Click on the video to play. 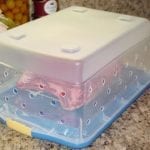 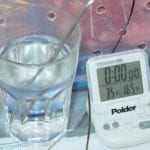 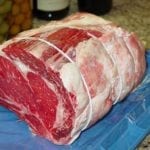 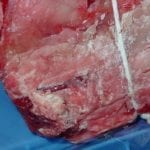 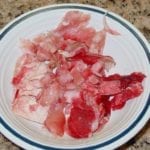 On Good Eats, Alton Brown drilled holes in a Rubbermaid storage container to create a “prolifically perforated plastic bin”. This allows air to circulate around the meat and protects it from spills and other contaminates, while protecting your fridge from any juices that might seep from the roast. Place the roast bone-side down on the lid and put the bin over the roast, as shown in the photo.

Alternatively, Brown suggests placing the roast bone-side down on a rack over a rimmed baking sheet pan and covering loosely with a dry towel, changing the towel daily.

When dry aging beef, your refrigerator should be impeccably clean and free of any items that produce strong odors, as the exposed meat may absorb these odors.

I followed Brown’s advice and dry aged this roast for three days.

The third photo above shows how the roast looked after three days in the perforated bin. At first glance, it doesn’t look much different, but the fourth photo shows that some of the edges have begun to dry out.

Use a sharp knife to shave off any dried or leathery spots on the roast. The fifth photo above shows how much I trimmed from this roast. Brown says, “You may also notice a slightly funky aroma. That’s OK. The smell of success.”

With the roast trimmed, tie at each bone using kitchen twine to prevent the outer layer of meat from pulling away from the rib eye during cooking.

At this point, you could season the roast and cook it any way you like. You could use the seasonings described in the Prime Rib – Herb Crusted article or the Standing Rib Roast – Montreal Steak Rub article, or any other approach that you like.

For this roast, I used a simple preparation adapted from a recipe by Ann Willan demonstrated on Martha Stewart Living that lets the flavor of the aged roast shine through.

Combine the dry mustard, Dijon mustard, and sugar to make a paste. Apply a thin layer of paste over the meat and fat surfaces of the roast, then sprinkle generously with kosher salt and freshly ground black pepper. There’s no need to apply the paste or seasoning to the bone side of the roast.

Cover loosely with plastic wrap and let sit at room temperature while you fire-up the cooker.

Use a modest amount of mild smoke wood to compliment the natural flavor of the meat. I used two medium-sized chunks of dry cherry wood, pecan, apple, or another fruit wood can be used if oak is not available. 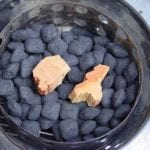 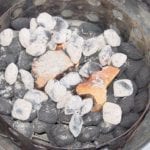 Fire-up the cooker using the Minion Method—one full Weber chimney starter of unlit Kingsford Charcoal Briquets in the charcoal bowl with 30 lit coals spread on top of the unlit coals.

Use Water In The Water Pan

Fill the water pan with cold water at the beginning of the cook to keep the cooker temperature low throughout the cooking process. There’s no need to add more water during the cook. 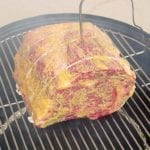 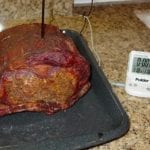 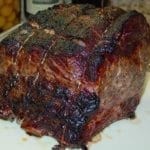 Assemble the cooker and place the roast bone-side down on the top grate. Insert a probe thermometer in the center of the roast to monitor the internal meat temperature during cooking.

Place the lid on the cooker. Add the smoke wood to the hot coals.

Cook the rib roast to 10-12° below the final internal temperature you want to achieve, then remove it from the cooker. For example, I wanted a final temp of 130°F for medium-rare, so I removed this roast at 118°F.

There’s no need to baste or turn the meat during cooking.

Here’s how the cooker and internal meat temperatures went during the cooking process.

When the roast hits the desired temperature, remove it from the cooker, transfer it bone-side down to a roasting pan, and cover loosely with foil.

As the roast sits, preheat your oven to 500°F. When the oven is hot, remove the foil, put the roast in the oven, and sear for several minutes until there’s a nice roasted color and crust on the surface of the meat. My roast spent 15 minutes in the oven, which turned out to be too long—5 minutes would have been enough. This reverse-sear process may create a lot of smoke in the kitchen, so open some windows and turn on the ventilation fan.

Note: If you used a probe thermometer to measure internal meat temperature during cooking in the WSM, check the specs for your unit to make sure the probe can withstand a 500°F oven. Better units often come with high-temp probes that can withstand 700-750°F, but lesser probes will burn-out at temps approaching 400°F. If you remove the probe from the roast, you may want to insert a wooden skewer in its place to prevent juices from spurting out of the probe hole. 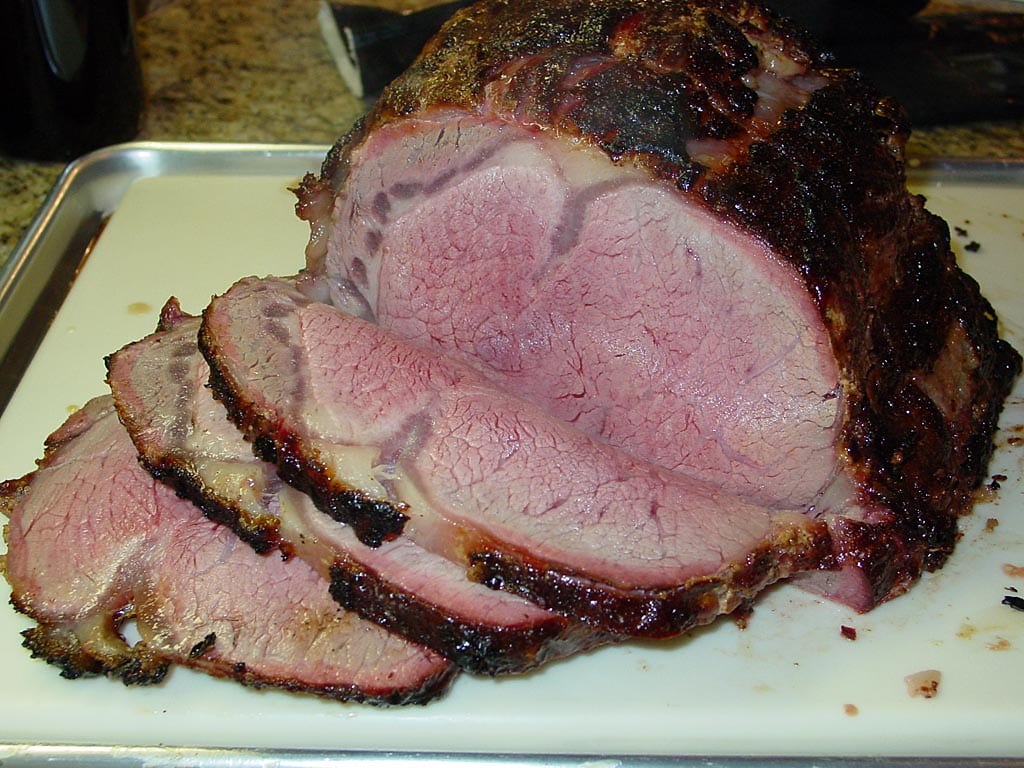 After searing, remove the roast from the oven and cover loosely again with foil. Let the meat rest for 30 minutes before carving.

To carve, remove the twine and roll the roast onto its side so the bones are pointing straight up. Using the bones as a handle, cut downward close to the bones using a sharp boning knife or an electric carving knife to remove the bones. Click here to see the cutting process as a GIF.

Next, place the roast flat on the cutting board and carve slices 1/2″ thick or to your liking. Cut the bones into individual pieces and serve them along with the roast…or save them for yourself!

In my cooking log, I noted that the meat had moderate smokiness and the crust had good flavor. The roast had a smoke ring about 1/4″ wide. The meat was evenly cooked inside, thanks to the low temperature in the WSM. And of course, the roast was tender as could be.

Did dry aging improve the flavor of this roast? Yes, I think it did, but it’s hard to say how much without doing a side-by-side comparison. This roast seemed to have a richer, beefier flavor than others I’ve done.