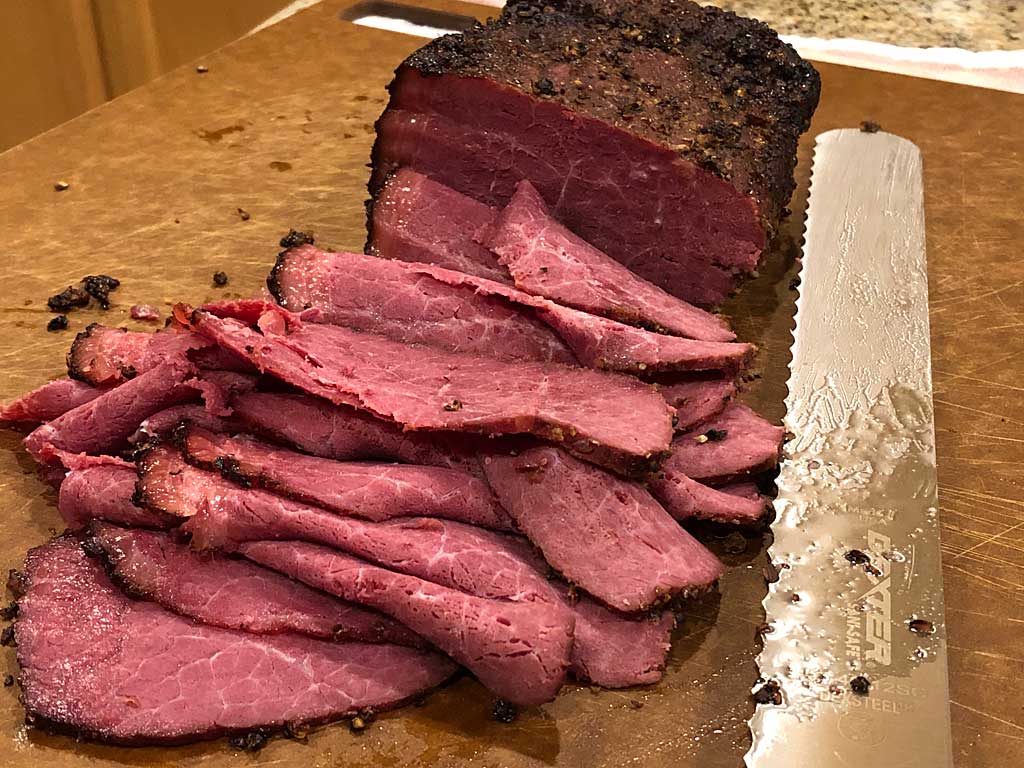 Let me say this right up front—I am not a big fan of beef round. It usually doesn’t have a lot of marbling and it can have a livery taste. There are so many other cuts of beef I would rather eat. And when it comes to pastrami, I’d rather make it using brisket flat than beef round.

Having said that, I heard good things about using Snake River Farms American Wagyu Corned Beef Round to make pastrami, so I thought I’d give it a try.

Here are some pictures I took on March 18, 2019 when I prepared quick pastrami using these two corned beef rounds on the Weber Bullet.

This video provides additional details on the recipe and method described in this article. 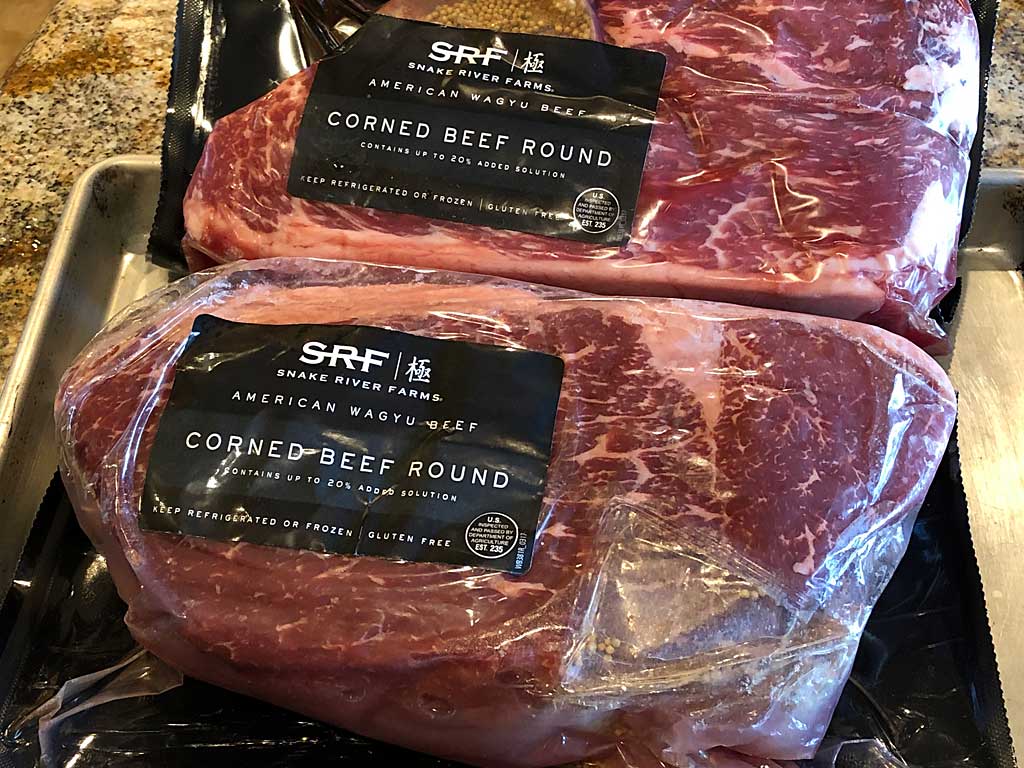 Snake River Farms American Wagyu Corned Beef Round shows up at Costco before St. Patrick’s Day. The ones shown here weighed 3.19 and 3.23 pounds and cost $7.79/pound. They’re injected with up to a 20% solution of water, salt, sodium erythorbate, flavoring, and sodium nitrate. A packet of pickling spices is included, but it’s not needed when making pastrami so I toss it. 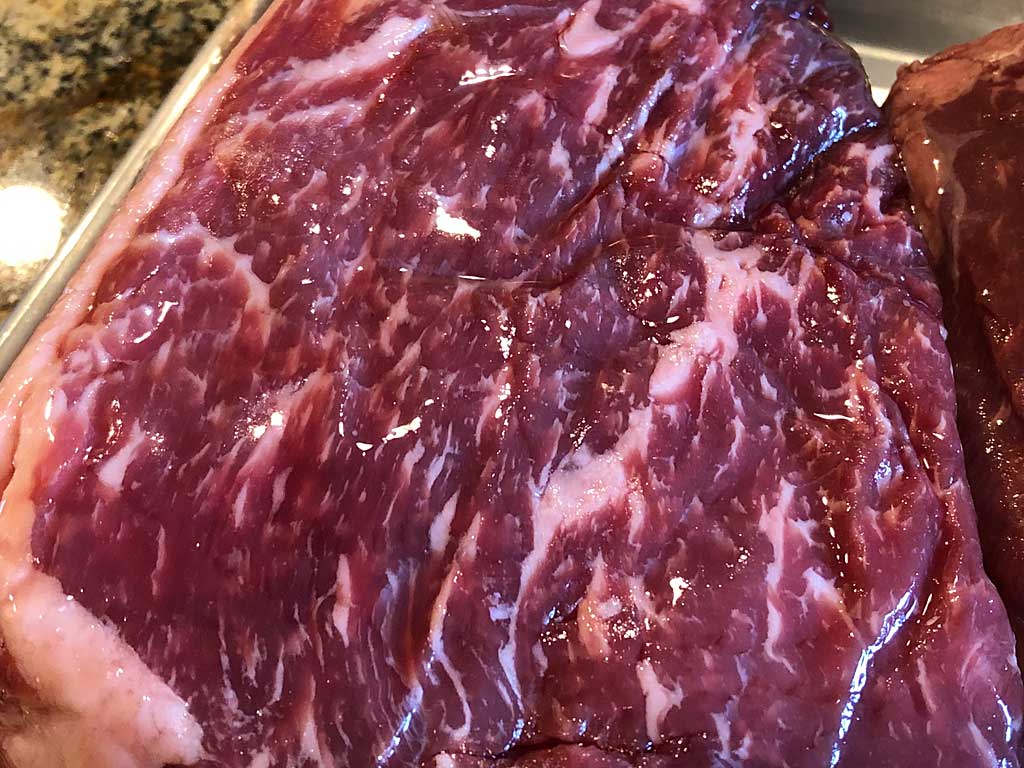 Note the marbling in the close-up of one of these American Wagyu beef rounds. That’s something you don’t see in a typical beef round. Things are looking promising! 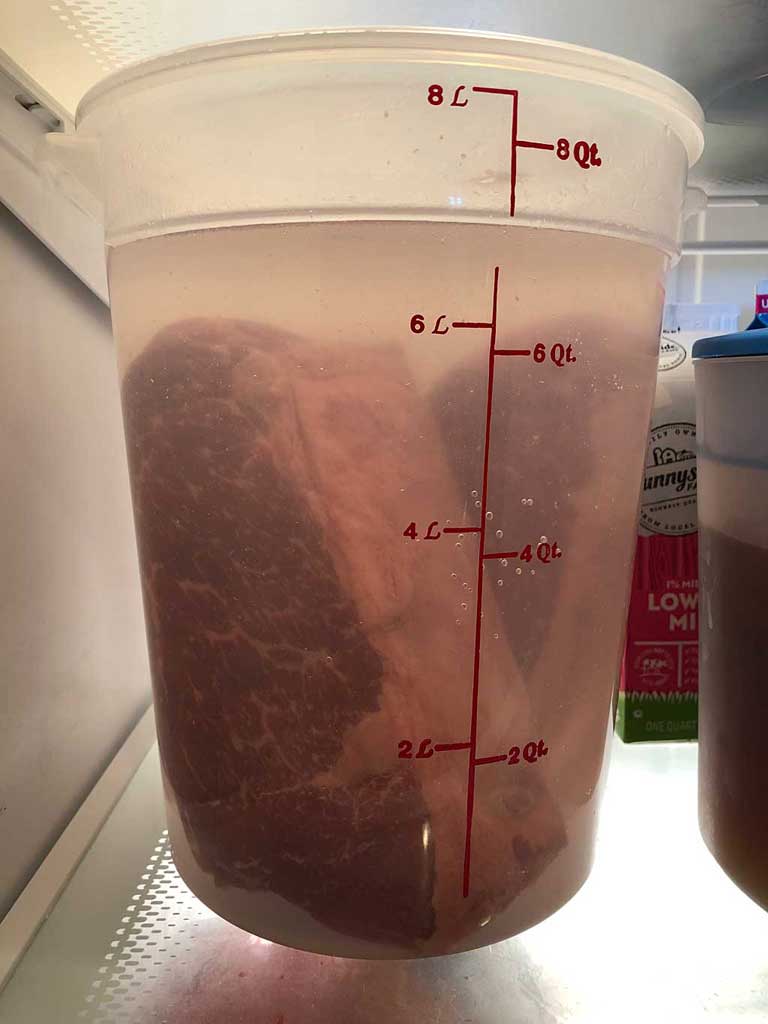 Remove each corned beef round from its packaging and rinse thoroughly under cold running water.

Place the meat in a non-reactive container and cover with cold water. Place container in the refrigerator and let the meat soak for 8 hours, changing the water every 2 hours, or as long as overnight. This helps reduce the saltiness of the meat.

After soaking, dry the meat thoroughly with paper towels. 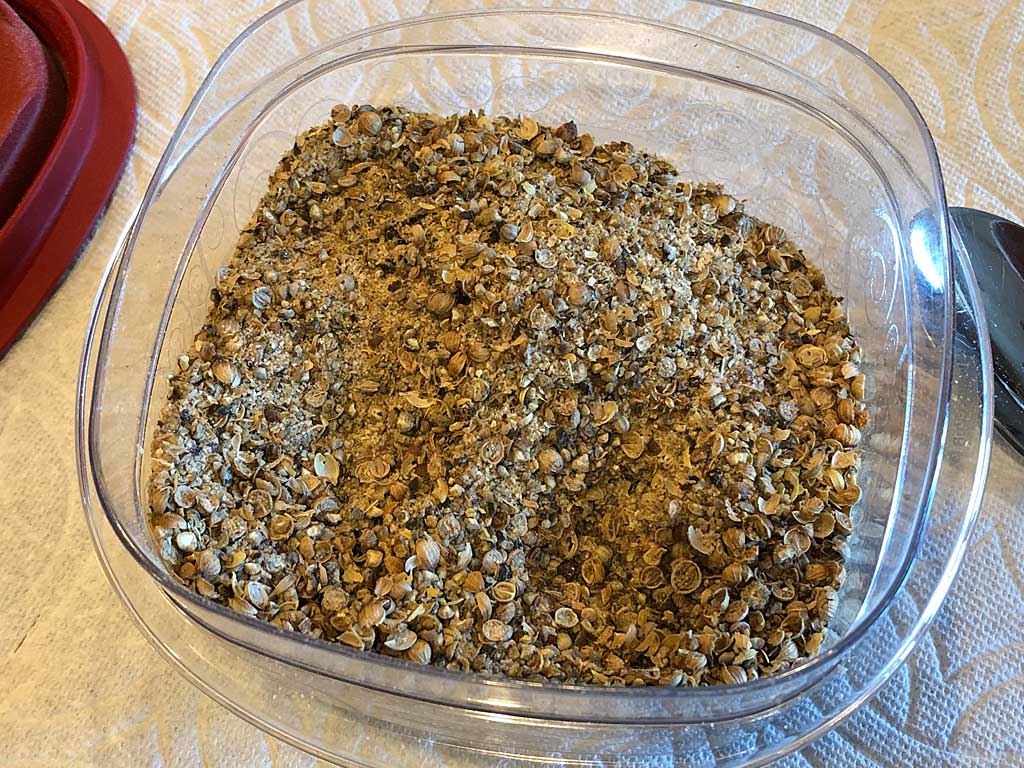 This salt-free rub provides the bold, peppery taste that is associated with pastrami. Use a coarse grind of black peppercorns and coriander seeds to create the crusty exterior typically found on pastrami. A mortar and pestle make quick work of the coriander seeds. 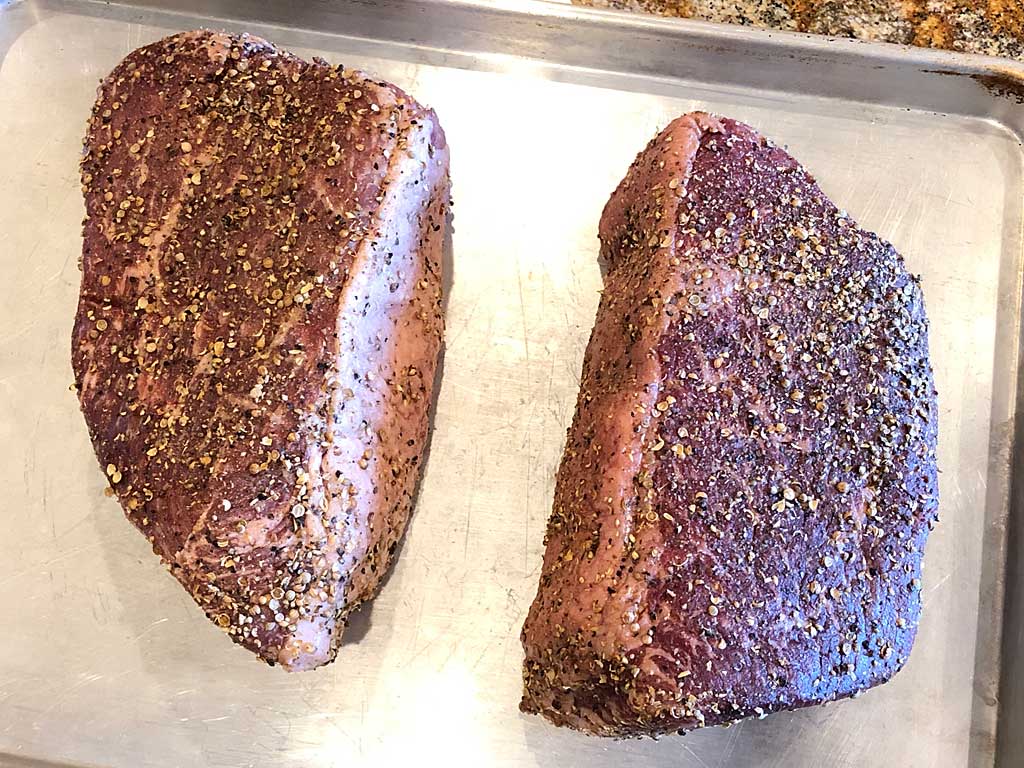 Apply a generous amount of rub to all surfaces of the meat. Adjust the amount of rub used according to your taste. If you like peppery flavor, pack on the rub!

Once rubbed, the meat is ready to go into the WSM. 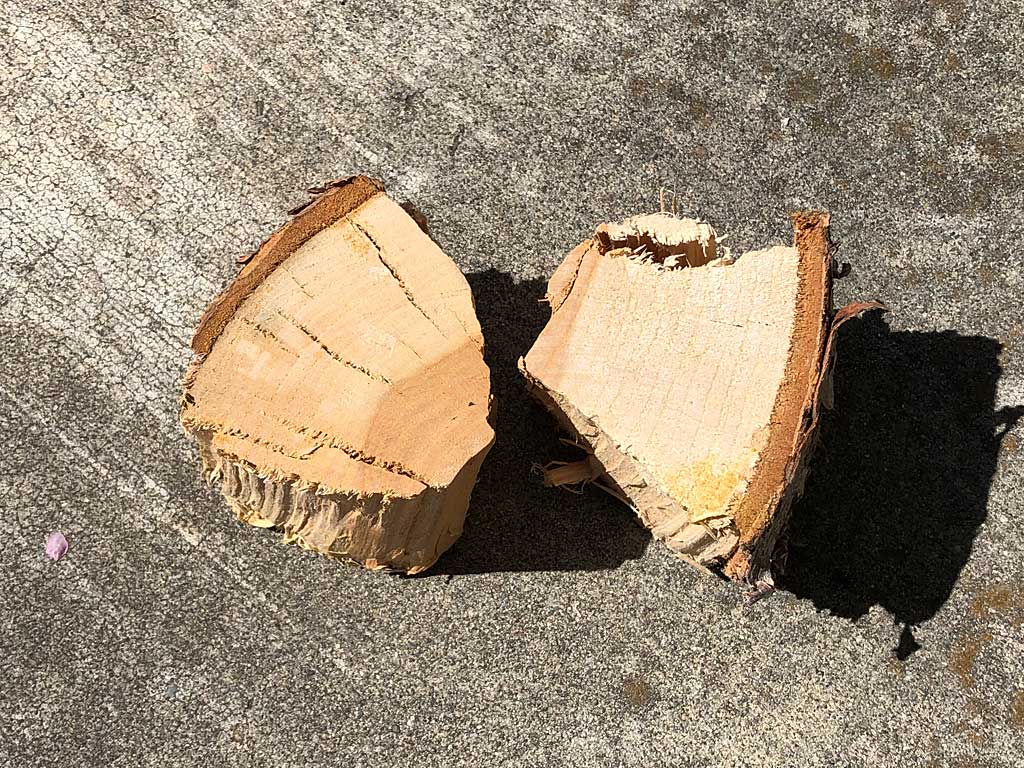 Use 2 fist-sized chunks of apple smoke wood. A little bit of smoke goes a long way—you don’t want to overpower the meat. Another mild fruit wood can be used if apple is not available.

Foil the water pan before use for easy cleanup and fill it with cool water. There’s no need to refill the pan during the cook. 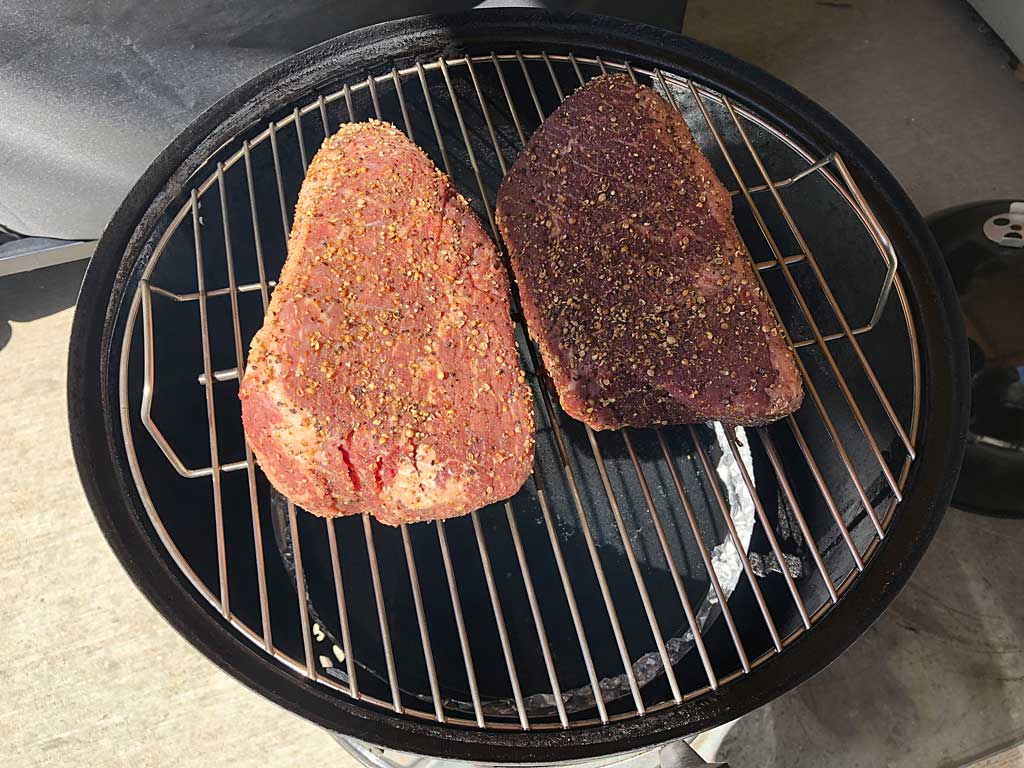 Assemble the cooker and place the meat on the top cooking grate. 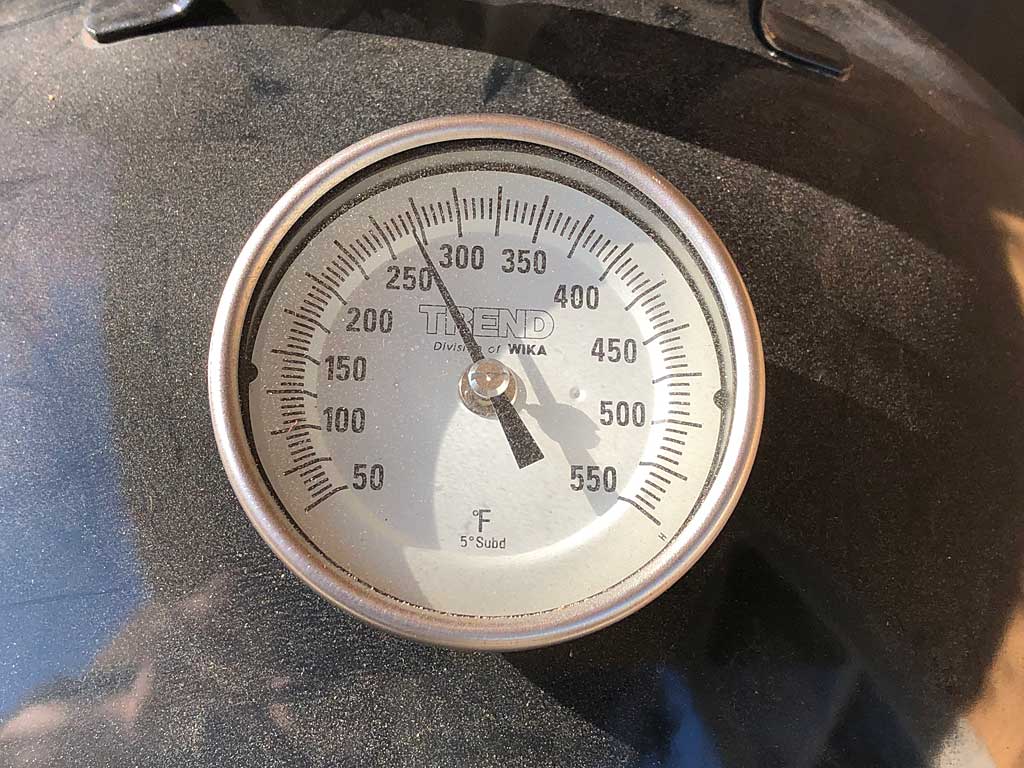 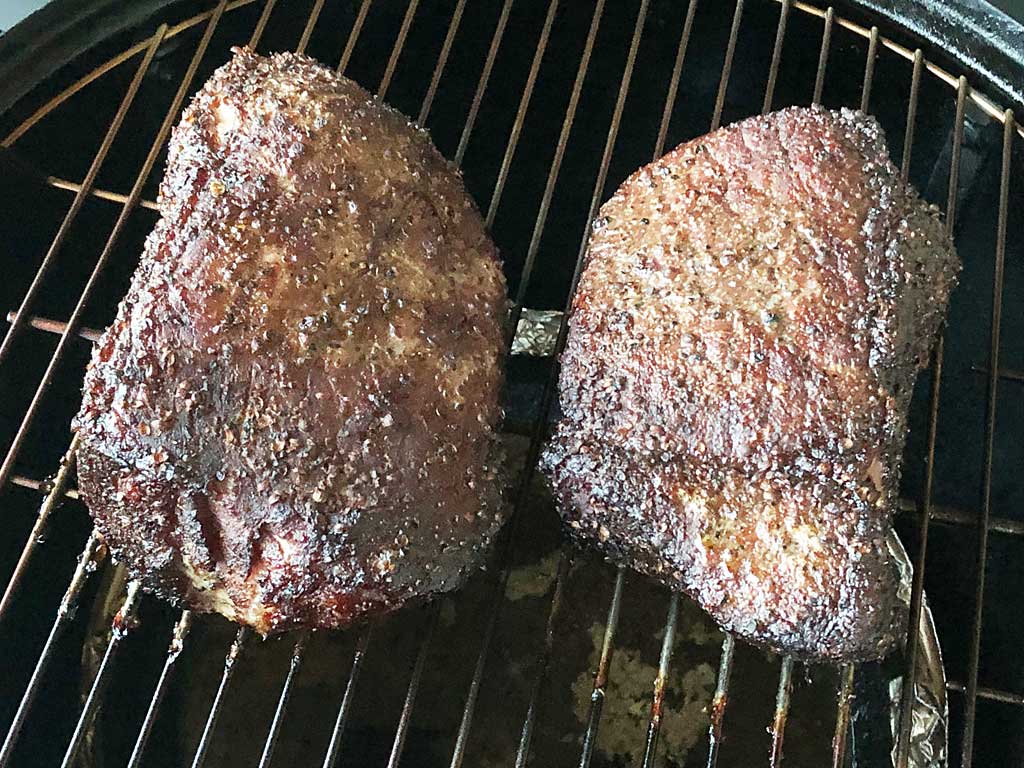 Cook the meat until it reaches an internal temperature of 170-175°F. Use an instant-read thermometer to take the meat’s temperature in several spots and average the results. It will read higher or lower in different spots depending on the thickness of the meat. 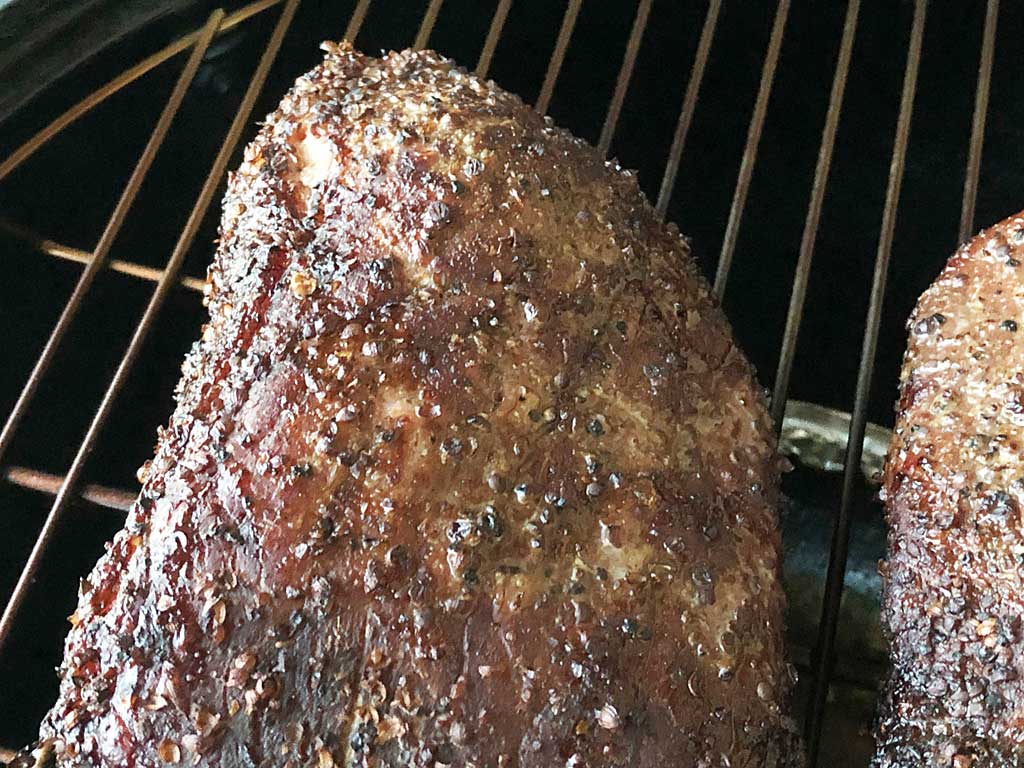 The corned beef rounds do not need to be turned or basted during cooking.

(a) Added 30 lit briquets to the cooker

You’ll notice that all the vents were 100% open throughout my cook as the WSM temp wandered around between 250-275°F. It was only at the very end that I felt it was necessary to add a few more lit coals to the cooker to push these corned beef rounds across the finish line. 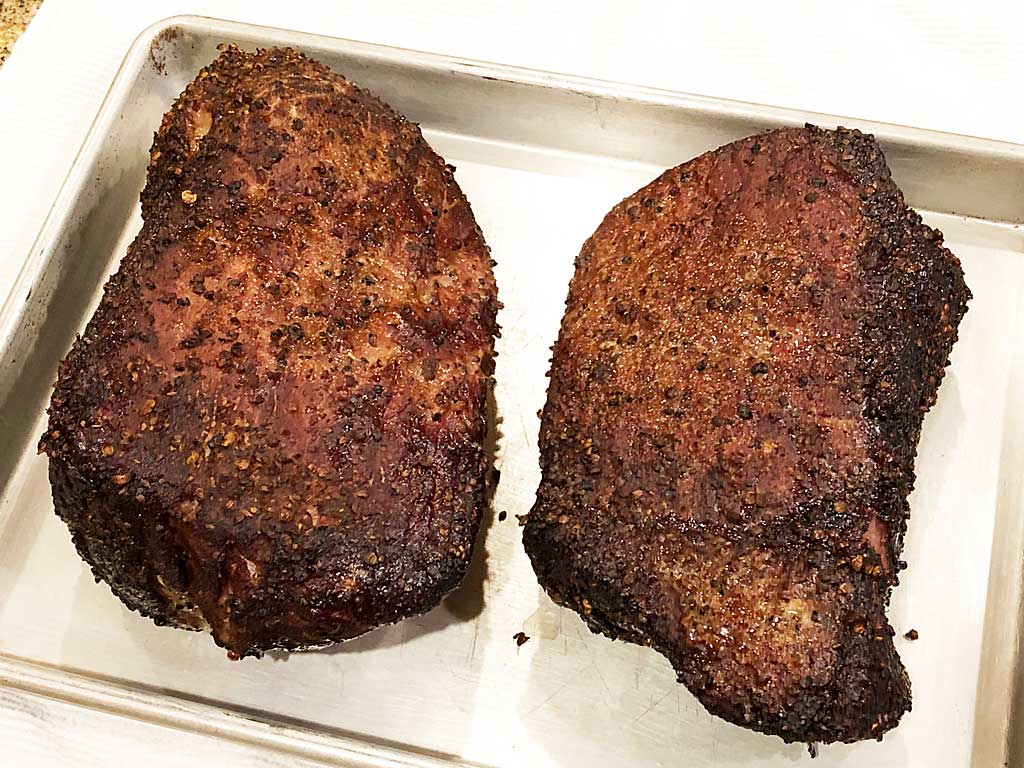 Once the meat reaches 170-175°F, remove it from the cooker, wrap it tightly with aluminum foil, and place it in an empty cooler. Let the meat rest for two hours. Carryover heat will continue to cook the pastrami, and juices collecting in the foil will reabsorb and redistribute within the meat. 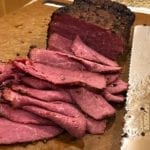 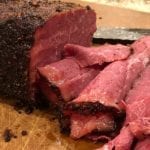 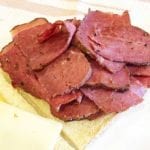 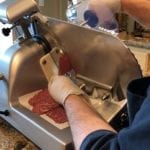 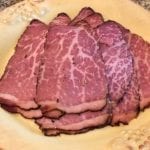 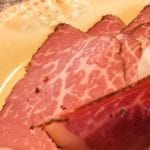 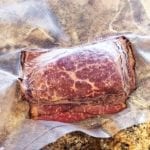 After a two hour rest, while the pastrami is still warm, use a sharp knife to slice the meat as thin as possible across the grain. In the first two photos, I’m using the Dexter 13463 12″ Scalloped Roast Slicer Knife, the knife used by Aaron Franklin to slice brisket at his famous BBQ joint in Austin, TX. It’s super-sharp, and with practice and patience you can slice pastrami about as thin as you’d like it.

The third photo shows thin slices of pastrami on rustic white bread with brown mustard and Swiss cheese, about to become a delicious sandwich.

Alternatively, refrigerate the meat overnight and slice it cold the next day using a mandoline, as shown in this video.

Another approach is to steam the pastrami the next day. This is the practice of many old-school delicatessens…smoke the pastrami as described above to an internal temperature of 150-170°F, refrigerate overnight, then place pastrami on a steam basket in a Dutch oven and steam for a couple of hours until it reaches an internal temp of 200-205°F. Let cool briefly before slicing across the grain.

I’ve wanted an electric meat slicer for a long time, so shortly after making this pastrami I broke down and bought a Beswood 250 10″ slicer. It made quick work of slicing all the leftover pastrami paper thin. I portioned the slices into 4 ounce servings, froze them in a vacuum container, then moved the frozen portions into vacuum freezer bags. This method avoids squeezing juices out of the meat when sealing the meat in bags.

Handle your quick pastrami the same way they do at the deli—slice off what you need and wrap the remainder tightly in plastic wrap (or vacuum pack using a FoodSaver) and store in the refrigerator or freezer.

To reheat, place sliced meat on a plate, cover with plastic wrap, and microwave gently at 20% power for just a minute or two, taking care not to overheat. If you’ve vacuum-packed sliced pastrami, just drop the sealed package of frozen or thawed meat into boiling water, turn off the heat, and let it steep for 10-15 minutes or until the meat is heated through.

Is Pastrami The Same As Smoked Corned Beef?

Pastrami—usually a whole brisket, brisket flat, or bottom round—is seasoned with ground black pepper and ground coriander. At some of the famous New York City delicatessens, pastrami is made using beef navel (a cut located on the underside of the cow, starting where the brisket ends) that is smoked at low temperature for a few hours, then steamed to complete the cooking process. On the WSM, we smoke pastrami at 250-275°F to an internal temperature of 165-175°F, let it rest for two hours and slice it thin, or we take it up to 195-205°F, let it rest for two hours, an slice it about 1/8″ thick. Another alternative is to smoke the meat to 165-175°F, refrigerate overnight, then steam it to an internal temp of 195-205°F before slicing.

Most corned beef and pastrami is injected with a liquid cure—it’s fast and can be automated by machine. Some pastrami is dry-cured, as in the Pastrami article. In my opinion, this results in pastrami that tastes more intense and less like corned beef.

Around St. Patrick’s Day, some WSM owners like to make quick pastrami using the corned beef briskets that are so abundant in supermarkets at that time, as I demonstrated in this article.