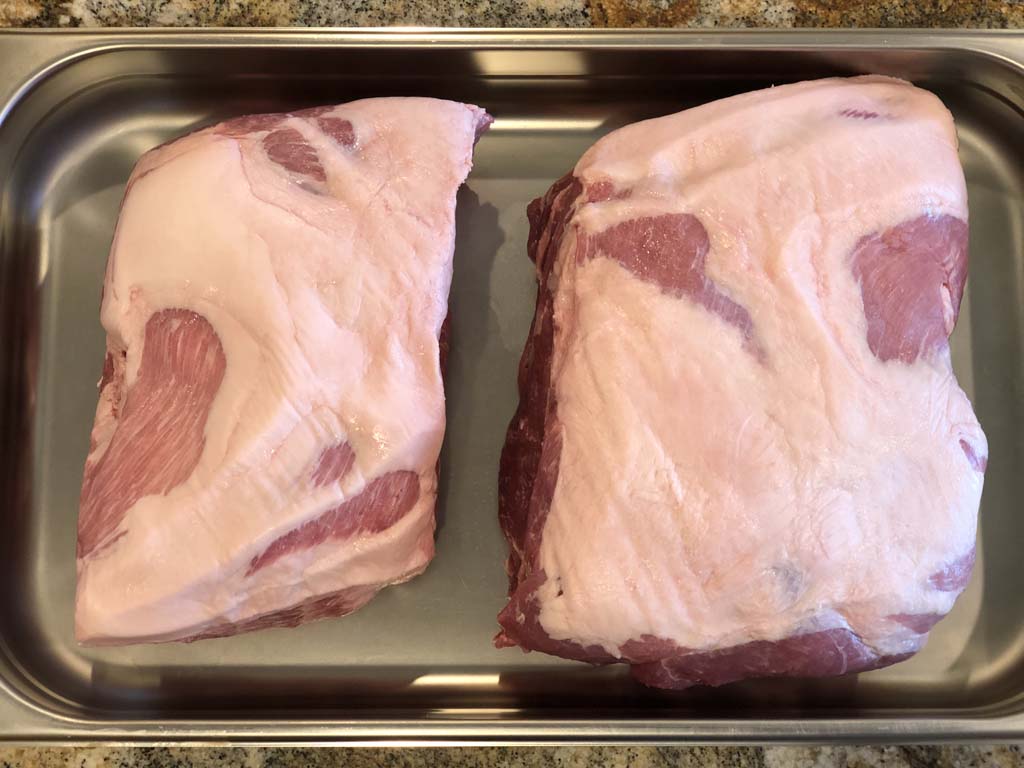 In December 2018, I had the pleasure of judging barbecue at the 7th Annual Smithfield King of the Smoker competition in Indian Wells, CA. There were a lot of BBQ heavyweights at this contest, including Chris Lilly of Big Bob Gibson’s Bar-B-Q who did a live demonstration of how to trim pork butt for competition. In passing, Lilly mentioned the benefits of cooking untrimmed pork butts fat side down over a direct fire and the smoky goodness that results from pork fat flaring up in the hot coals.

I decided I’ve give this a try in the Weber Smokey Mountain Cooker. Two pork butts untrimmed, placed fat side down on the top cooking grate, with the water pan removed from the cooker so fat would render directly into the hot charcoal below.

This video highlights some of the steps of barbecuing pork butts untrimmed over direct heat.

This Is A Method, Not A Recipe 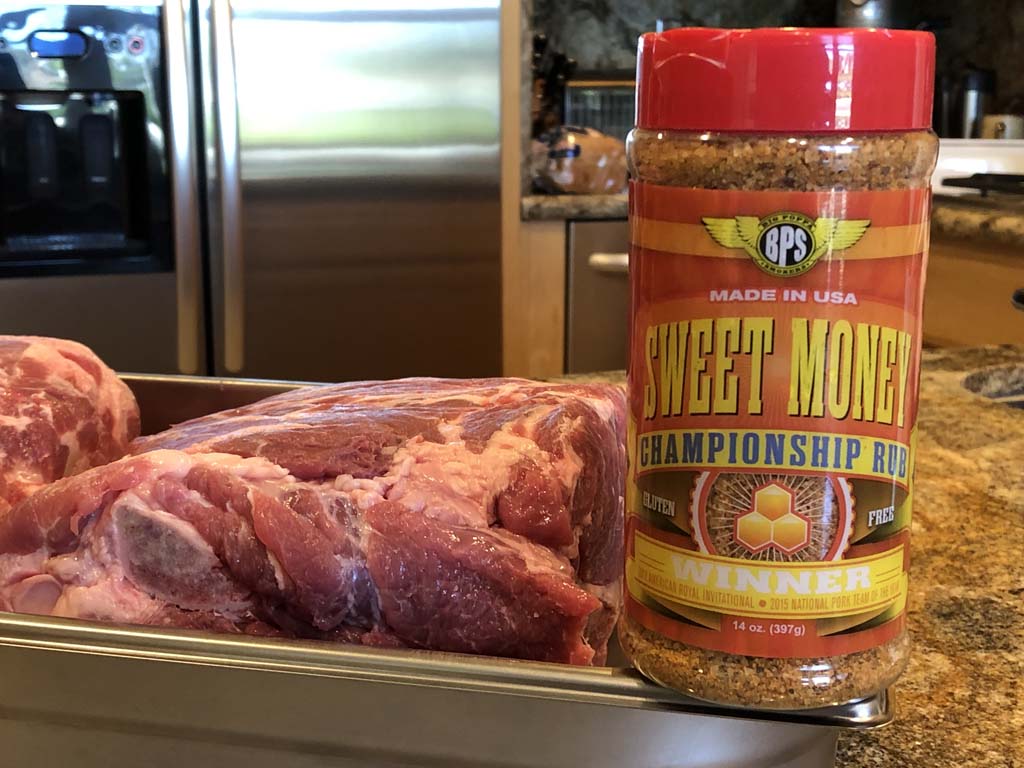 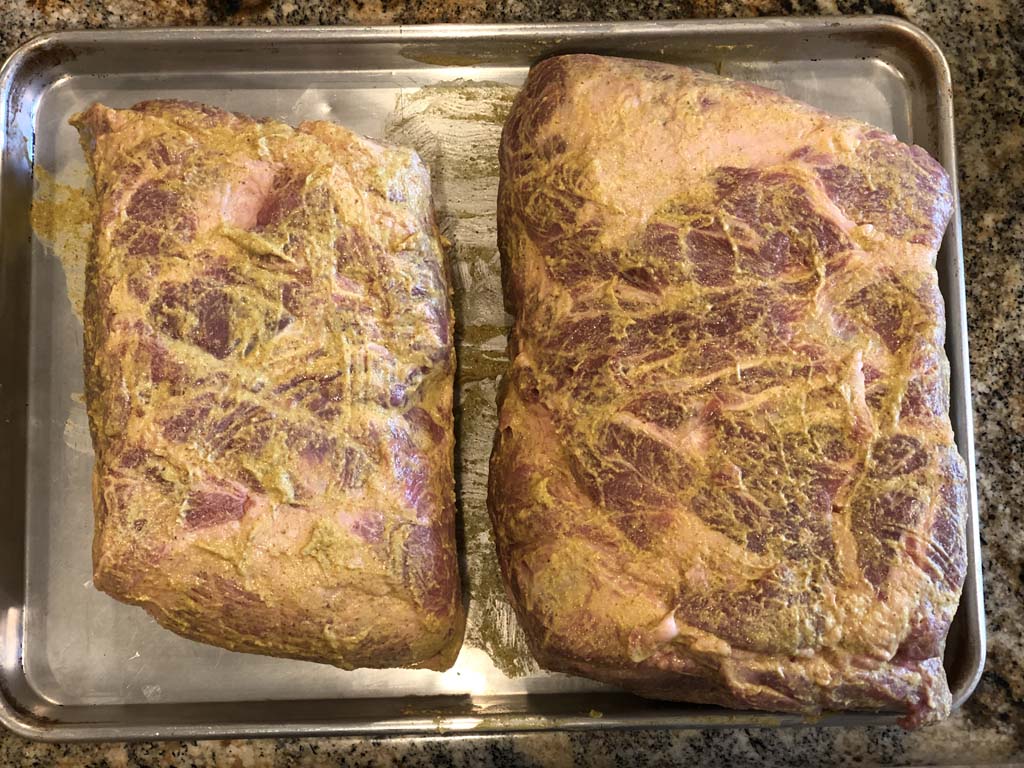 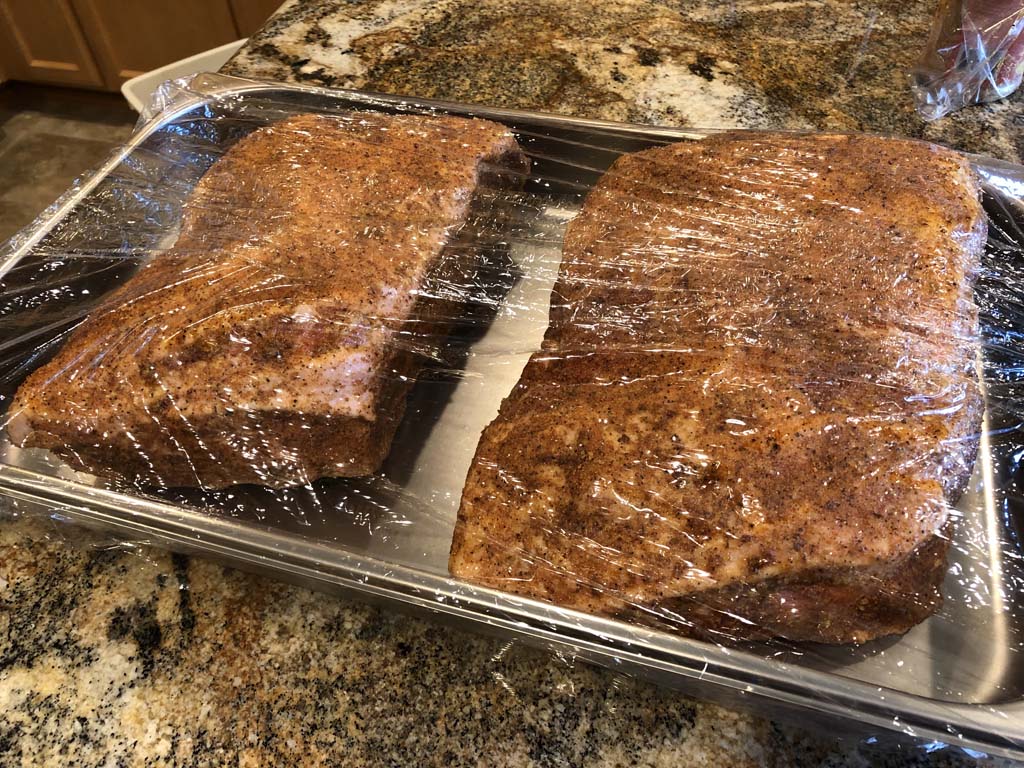 At 11:30 pm, I fired the WSM using the Minion Method, filling the charcoal chamber to the top with unlit Kingsford Charcoal Briquets, nestling three fist-sized chunks of dry apple smoke wood into the unlit charcoal, then lighting 30 briquettes using a Weber chimney starter and spreading them over the unlit briquettes. 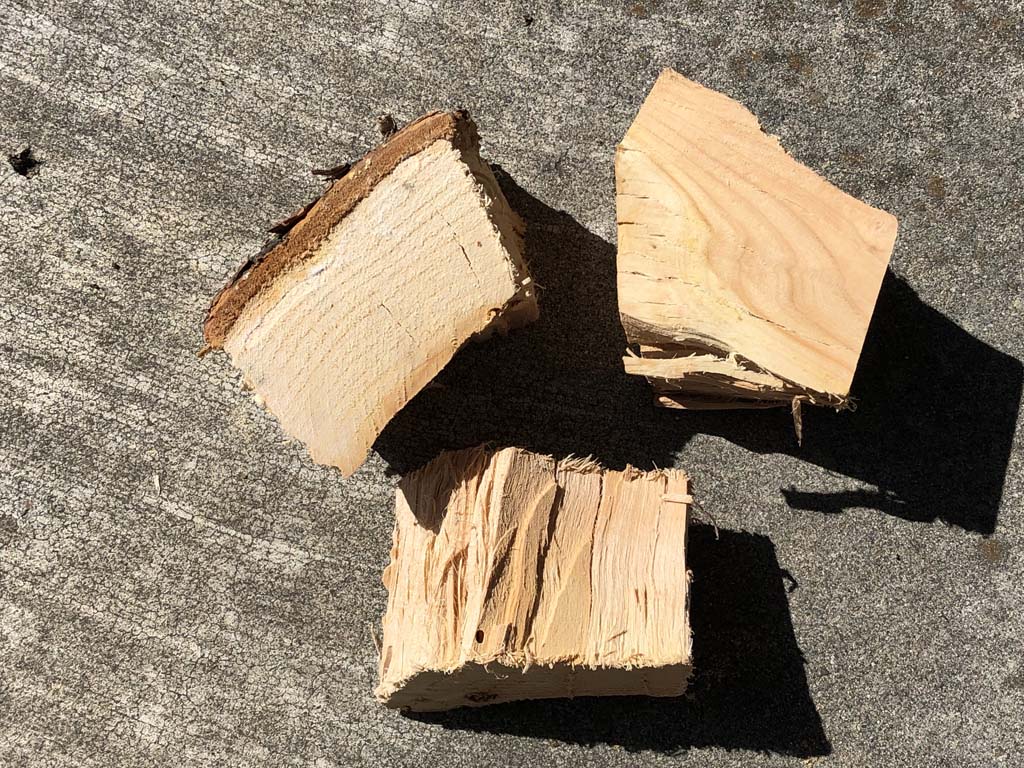 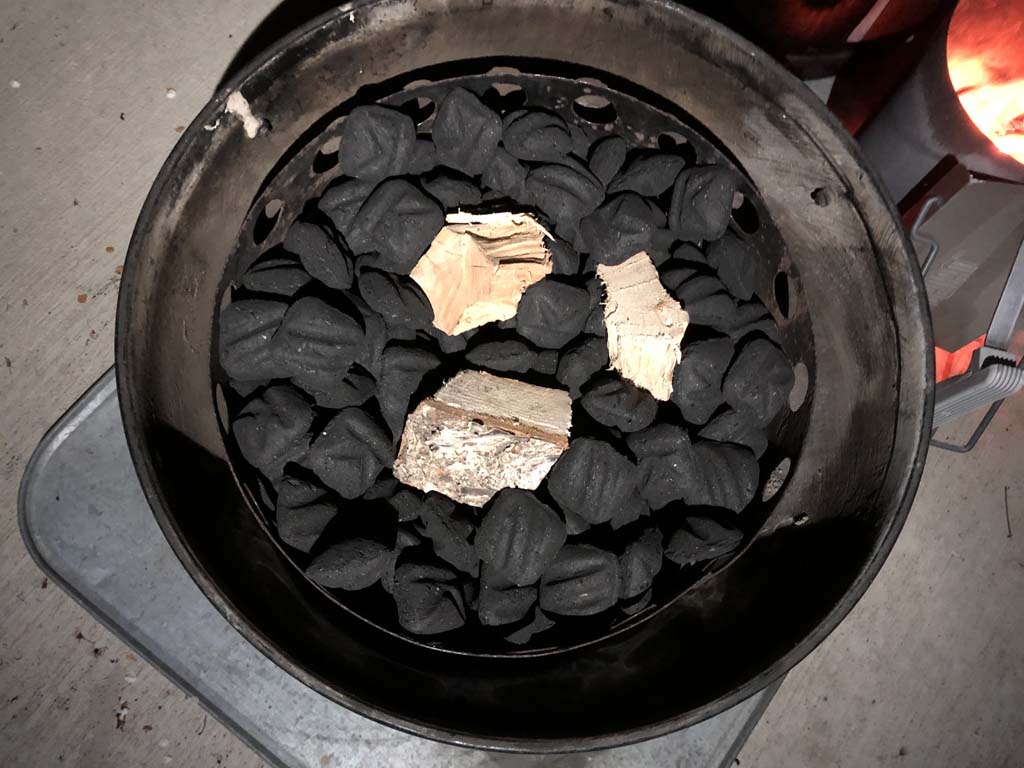 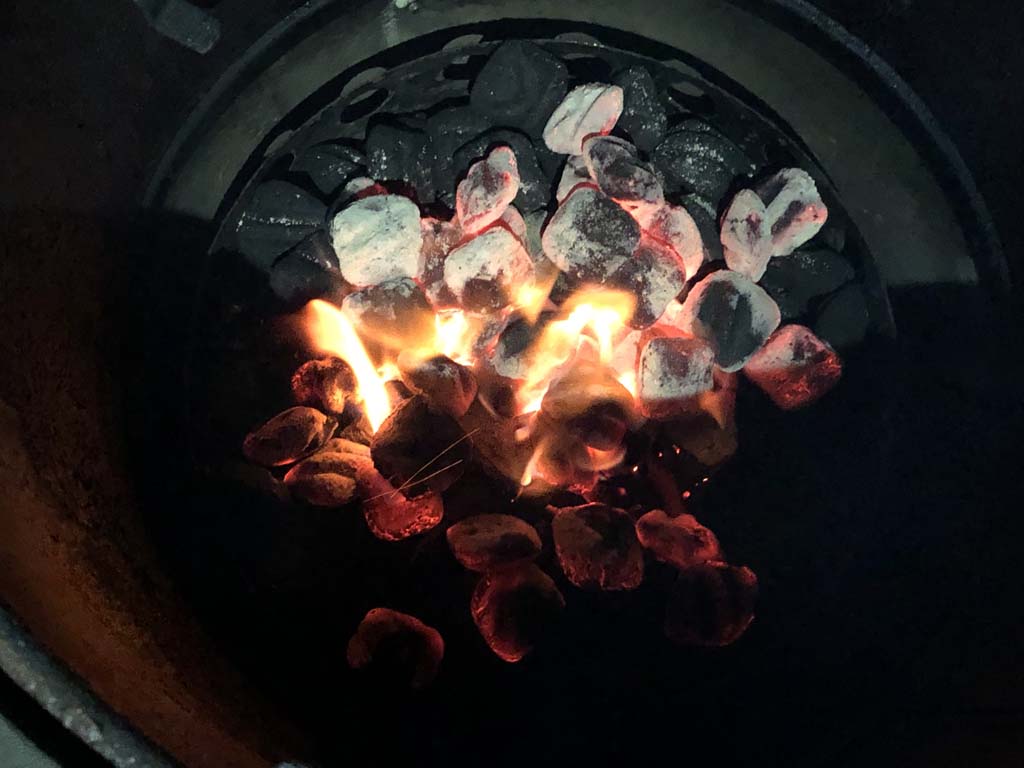 At 11:45 pm, I assembled the cooker, leaving out the water pan, and placed the pork butts fat side down on the top cooking grate. 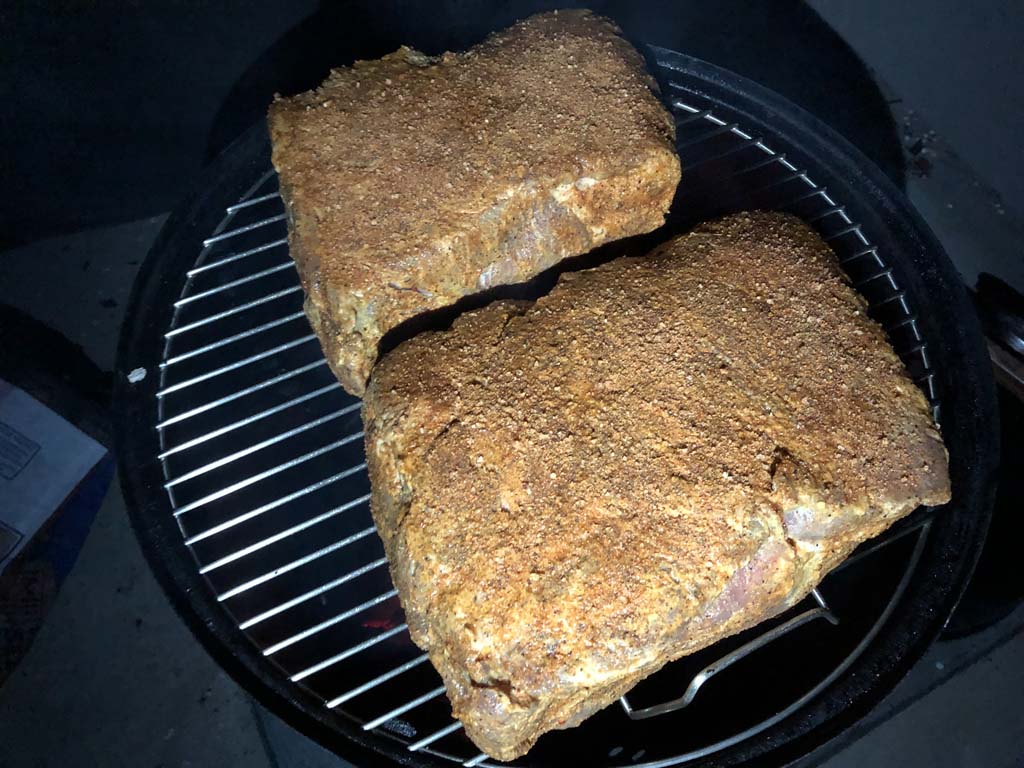 When the cooker reached about 250°F, I started to partially close the 3 bottom vents so the cooker settled in at 250-275°F measured at the lid, adjusting the 3 bottom vents as necessary to maintain this temperature range throughout the cooking session. My temps spiked as high as 300°F at times, but that was OK.

I cooked the butts until the internal meat temperature measured about 205°F with a Thermapen Mk4 instant-read thermometer, checking in 3-4 spots and averaging the results. Along the way, I used a spray bottle to spritz the meat with water once the crust was set about 2 hours into the cook and about every 30 minutes thereafter. I also gave the cooking grate a 1/4 turn every hour in case there were any hot spots below the meat. 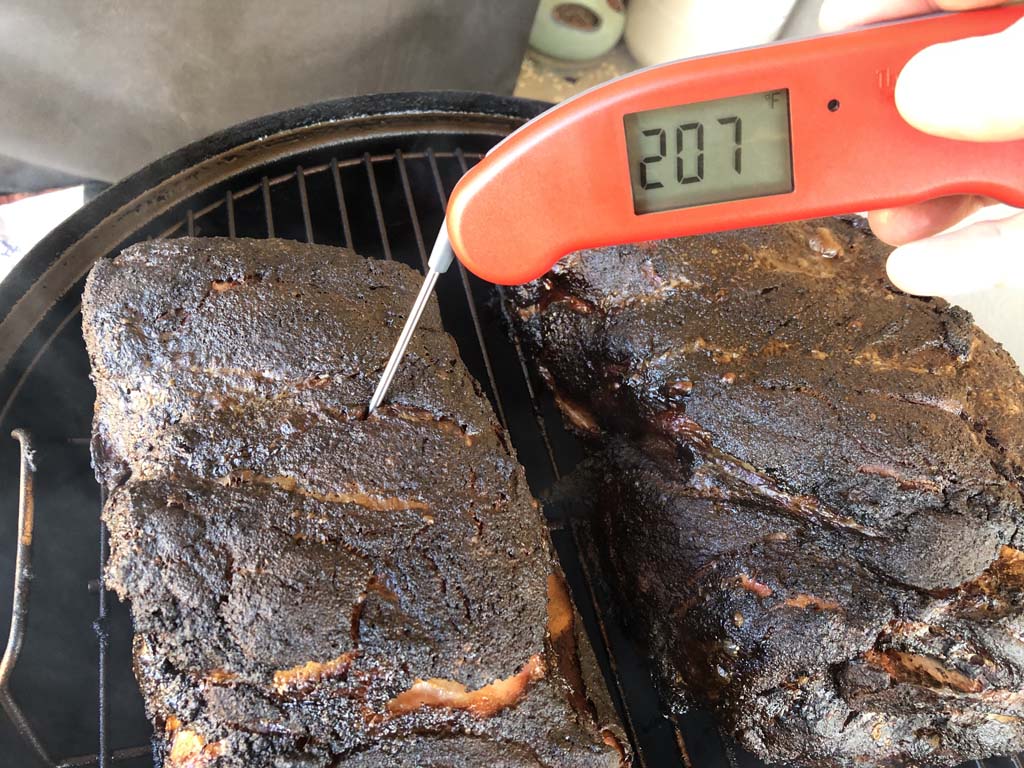 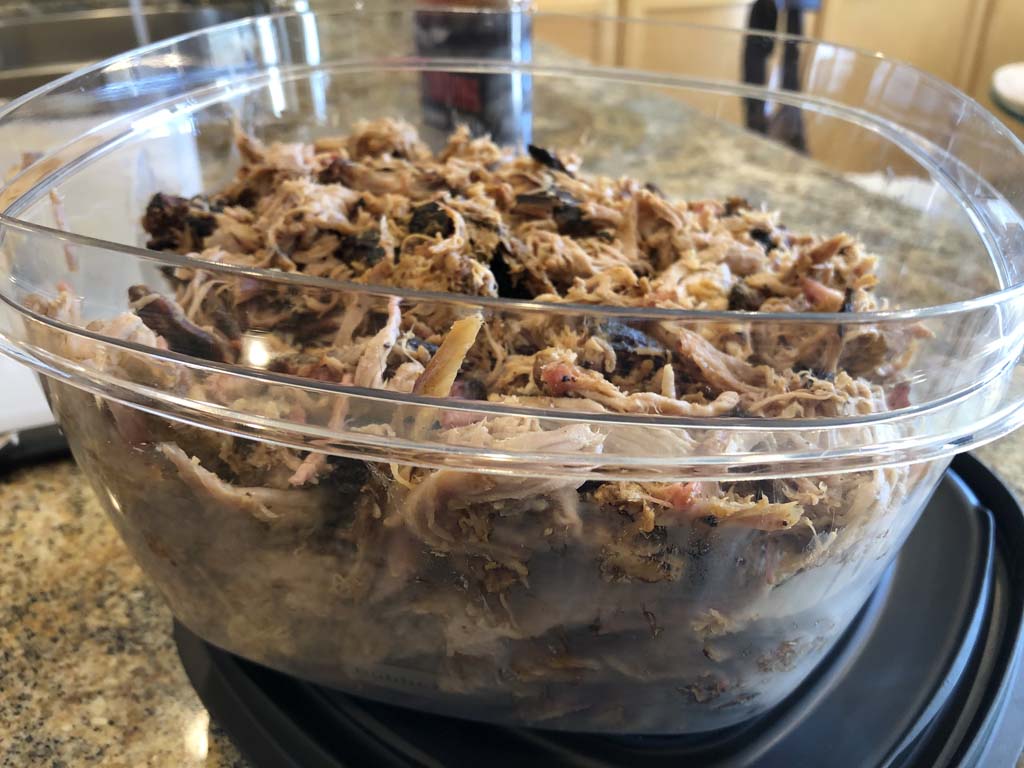 I pulled one of these butts by hand, mixing in some additional rub and a bit of barbecue sauce for added flavor and moisture. It made for a delicious pulled pork sandwich! 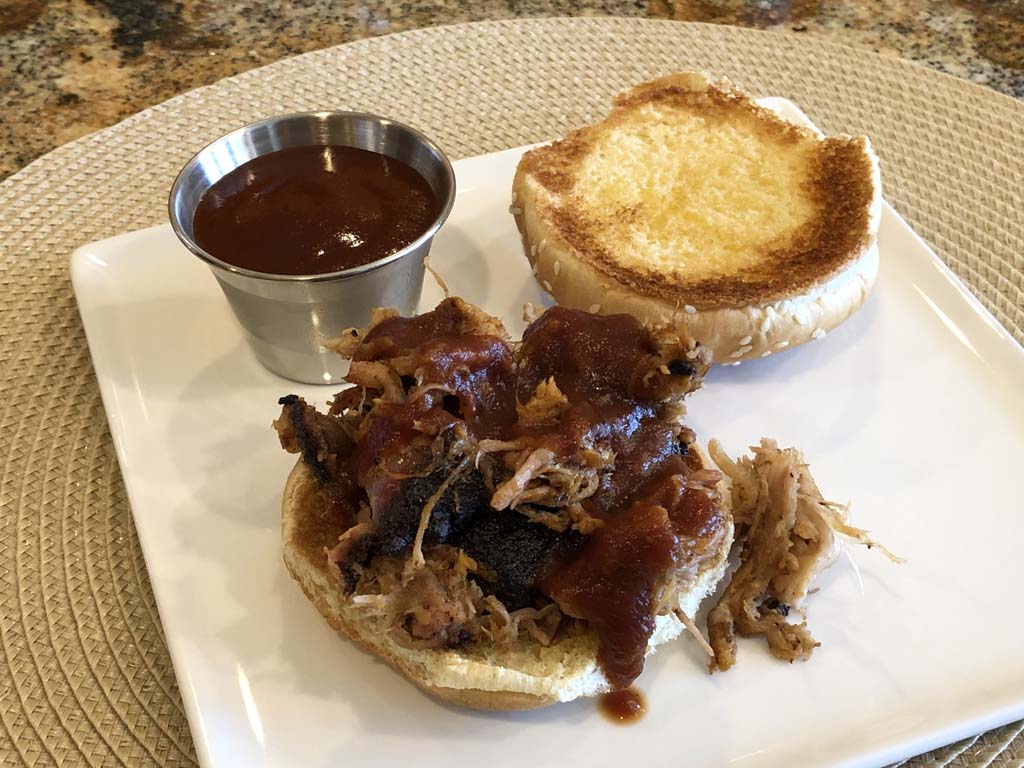 The other butt was processed in a KitchenAid stand mixer! I pulled it into large chunks, removed any areas of fat and weird connective stuff, dropped them into the mixer and let it rip until the meat was the texture of chopped pork. You can watch this process in the video that accompanies this article. It works great, you just have to watch closely and not overprocess it. It goes from pulled to chopped to baby food very quickly!

Is Untrimmed Direct Heat An Improvement?

Overall, I’m happy with the results of this cook. The process was easy and the meat tasted good. Still, I don’t think it was a big improvement over my usual process of trimming the meat and cooking it indirect with or without water in the pan.

One problem I had with this method was that the fat cap and false cap meat—the surface facing the direct heat—rendered into what I can only describe as a burnt “hard cap”. In the video that accompanies this article, you can watch me pull it off one of the butts and tap it with my knife—it’s hard as a rock. In fact, with one of the butts I made the mistake of cutting the “hard cap” into little pieces and mixing it into the pulled pork, thinking it would be like pork cracklings. Instead it tasted burned and detracted from the overall flavor of the meat. In my cooking log, I wrote, “Fat side too intensely flavored. Either discard or wrap at some point.”

One a brighter note, I was concerned that cooking untrimmed butts over direct heat would result in a greasy mess in the bottom of my Weber Bullet. Good news, it wasn’t bad at all. Much of the grease burned in the hot coals, of course, and what was left was soaked up by the dry charcoal ashes. A quick scrub with a palmyra brush and the charcoal bowl was clean as a whistle…or at least as clean as you can expect from a charcoal bowl. 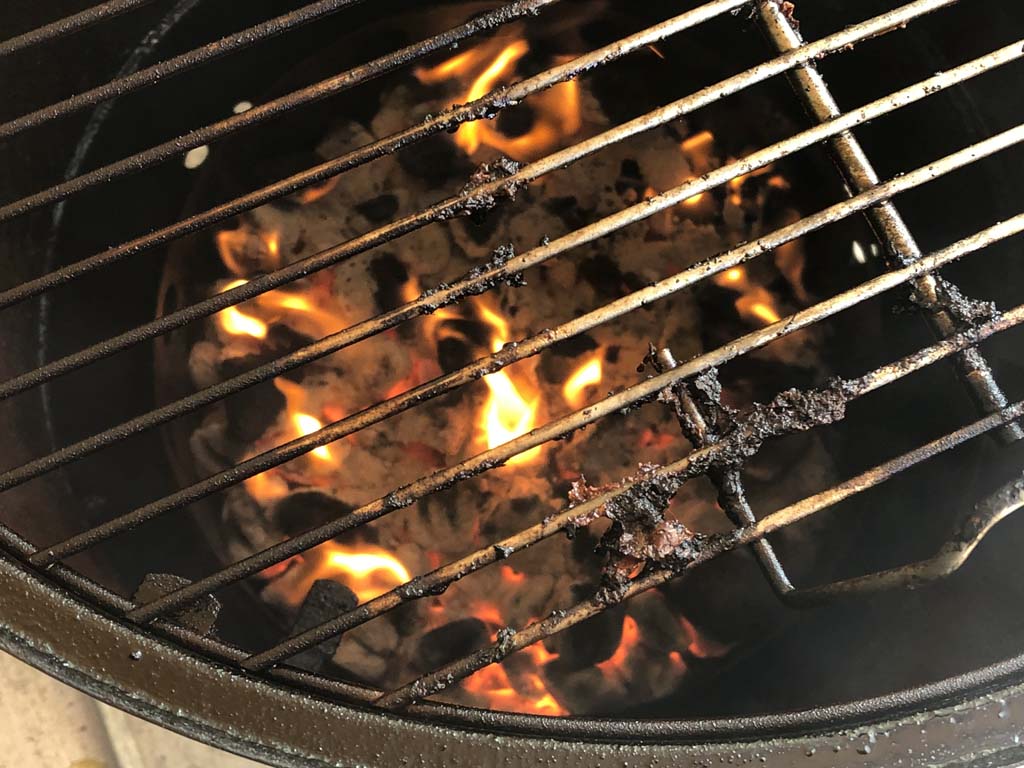 Will I use this process again in the future? Maybe. I might wrap the butts part way through the process to see if I can prevent the formation of that “hard cap” on the bottom of the butt. In any event, it was a fun experiment. If you’re interested, I’d suggest you give it a try for yourself.