Mustard is a common ingredient in barbecue cooking, and it’s commonly “slathered” onto pork butt or ribs before the application of rub. Most people report that they cannot taste the mustard after cooking, so why use it in the first place? One reason is that mustard acts like glue to hold the rub on the meat. Another reason is that some people feel it promotes the formation of “bark”, the brown, chewy exterior layer of meat that is so flavorful.

I’m not sure if mustard makes for better bark, but I do know that lots of folks use it, that it’s fun to use, and I guarantee your pork butt won’t end up tasting like a hot dog!

Buy And Prepare The Pork Butt 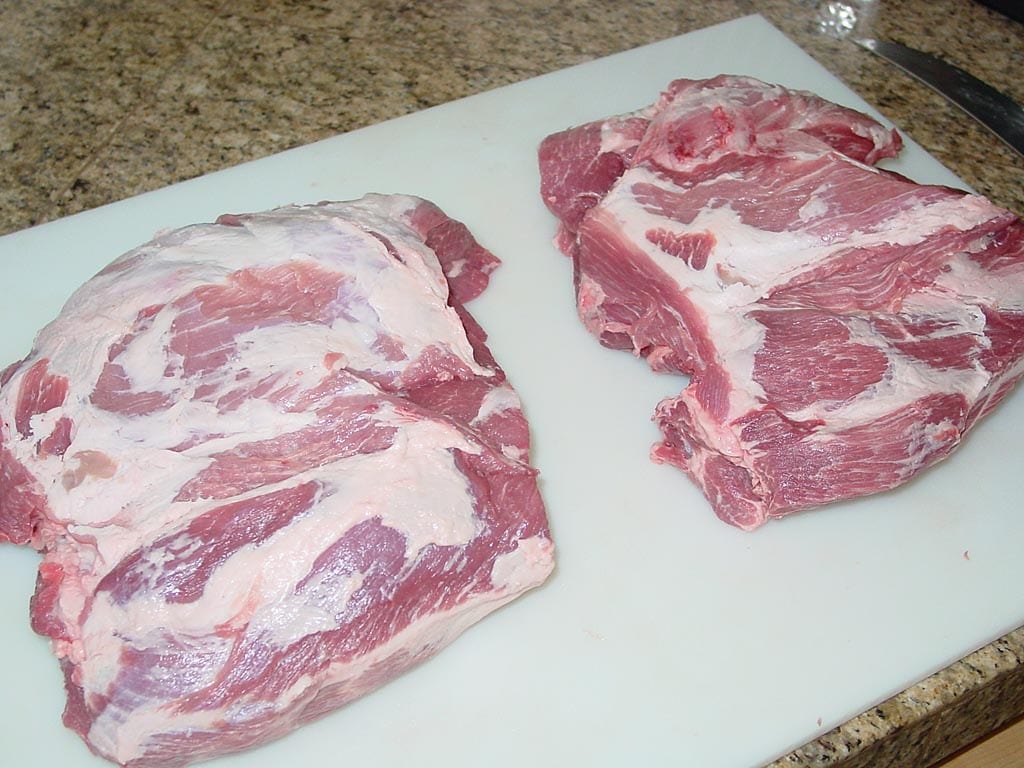 Purchase two large, untrimmed pork butts, either boneless or bone-in. Trim the excess fat as you see fit. If using boneless pork butts, consider tying each roast in three or four locations with kitchen twine to hold the meat together during cooking and handling.

Apply a generous coat of regular yellow mustard to all sides of the meat, then liberally sprinkle on your favorite rub. You can use a fancier mustard, if you like, but it won’t make a discernable difference to the flavor of the meat. 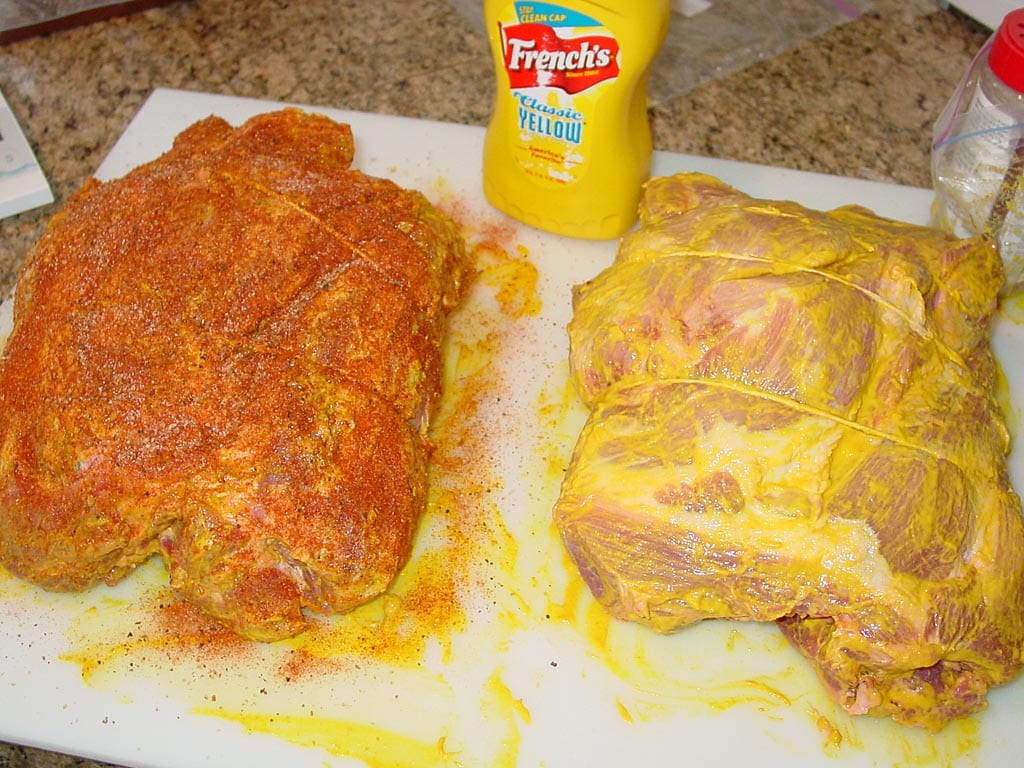 After applying the rub, let the butts sit at room temperature while firing up the cooker. Alternatively, you can refrigerate the meat for several hours or overnight.

I purchased a Cryovac package of two boneless pork butts from a wholesale warehouse store. One piece weighed 9 pounds, 10-1/2 ounces, the other 9 pounds, 11-1/4 ounces. I trimmed off the thick, exterior layer of fat from each butt and any large areas of fat that were easy to remove, then tied each butt with kitchen twine. After trimming, the butts weighed 7 pounds, 13 ounces and 7 pounds, 1 ounce respectively.

Here’s the rub recipe I used on these butts:

* I substituted Turbinado sugar (also known as “Sugar in the Raw”) for brown sugar.

** I omitted the crushed fennel seed as I don’t care for the flavor.

Mix ingredients thoroughly. Makes enough rub for two pork butts, with some leftover for sprinkling into pulled meat after cooking.

Light the cooker using the Minion Method. Fill the charcoal ring to the top with unlit Kingsford Charcoal Briquets. Bury several chunks of dry smoke wood in the coals and place a few chunks of wood on top. Unless you’re cooking in extremely cold or windy conditions, this should be enough fuel to fire the cooker for 18 hours or more. 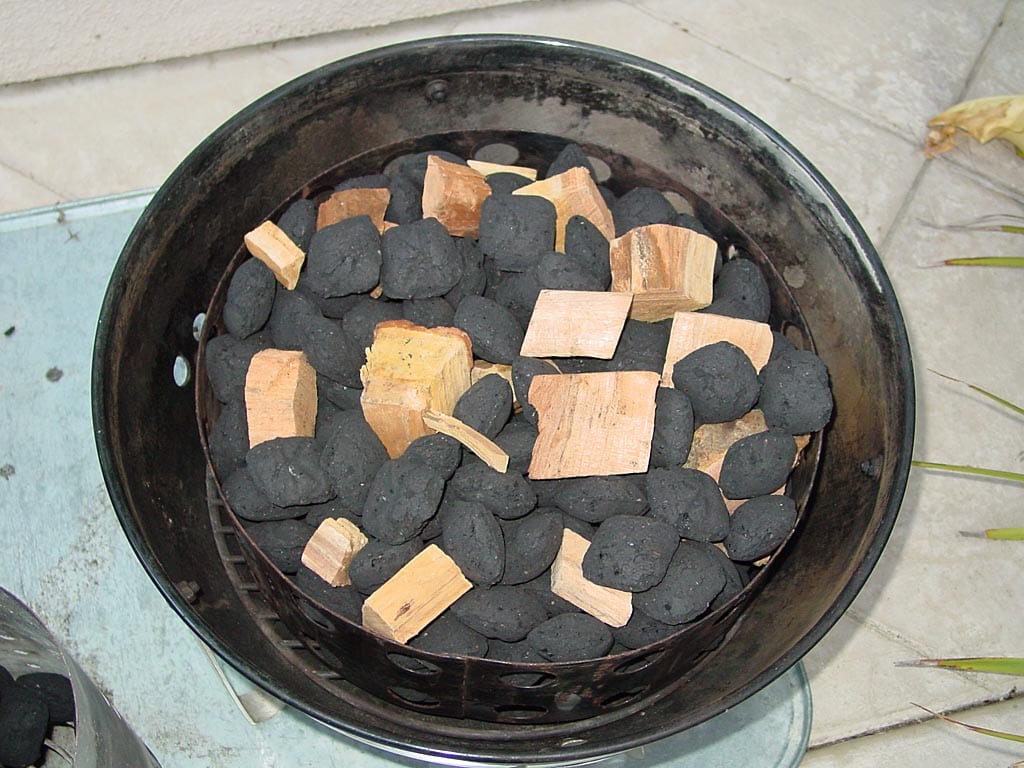 Light about 20 briquettes in a Weber chimney starter and spread them over the unlit briquettes and smoke wood chunks.

Assemble the cooker and fill the water pan with hot tap water. Put the butts into the cooker, one on each cooking grate (or both on the same grate, if they fit). If the butts are of different sizes, put the larger butt on the top grate and the smaller one on the bottom. 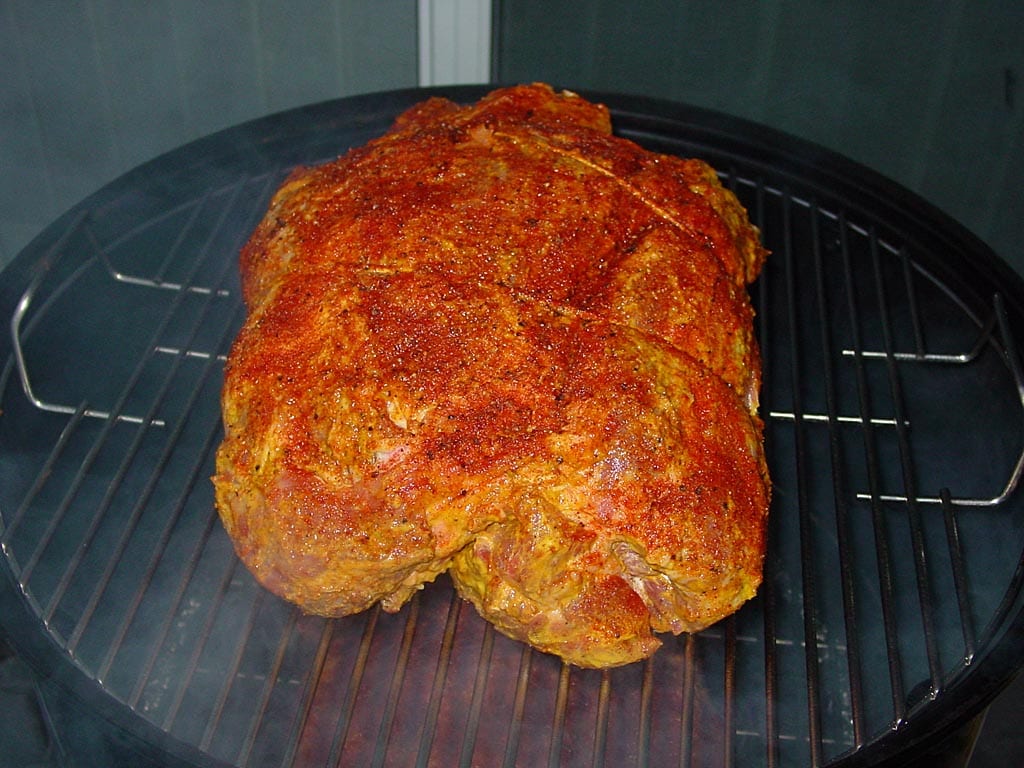 For this cook, I used apple smoke wood. I didn’t have any large chunks, so I used lots of smaller pieces equivalent to about four fist-sized pieces.

I also lined just the outside surface of the pan with heavy-duty aluminum foil for easy cleanup. 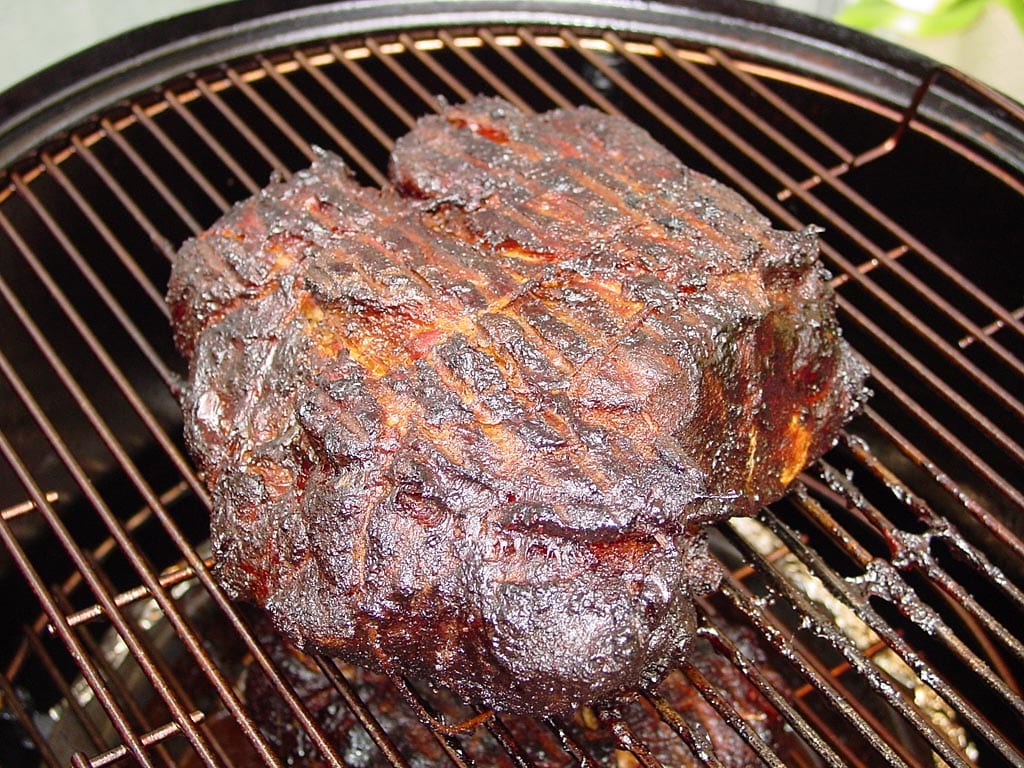 I turned these butts only once after 12 hours of cooking, and basted three times after turning the meat using this solution:

Place ingredients in a spray bottle and shake well to combine before each application.

Replenish the water pan with hot tap water as necessary.

I cooked these two butts overnight starting at 7:45pm and ending at 1:30pm. I started checking internal temperature after 14 hours of cooking.

Here’s how the cooker temperature and vent settings went during this almost 19 hour cooking session: 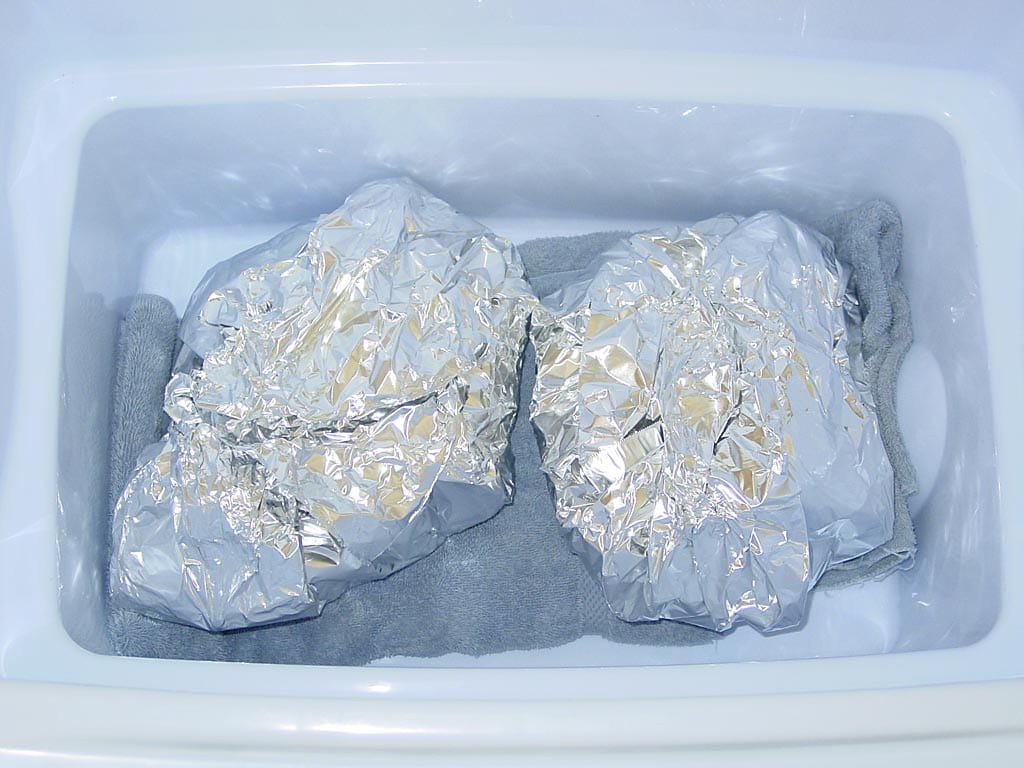 When the meat reaches 190°F, remove from the cooker and wrap tightly with heavy-duty aluminum foil. Place the wrapped butts in an empty cooler and hold until ready to pull and serve. The meat will remain safely above 140°F for 2-4 hours. See Holding, Storing & Reheating Barbecued Meats for more details. 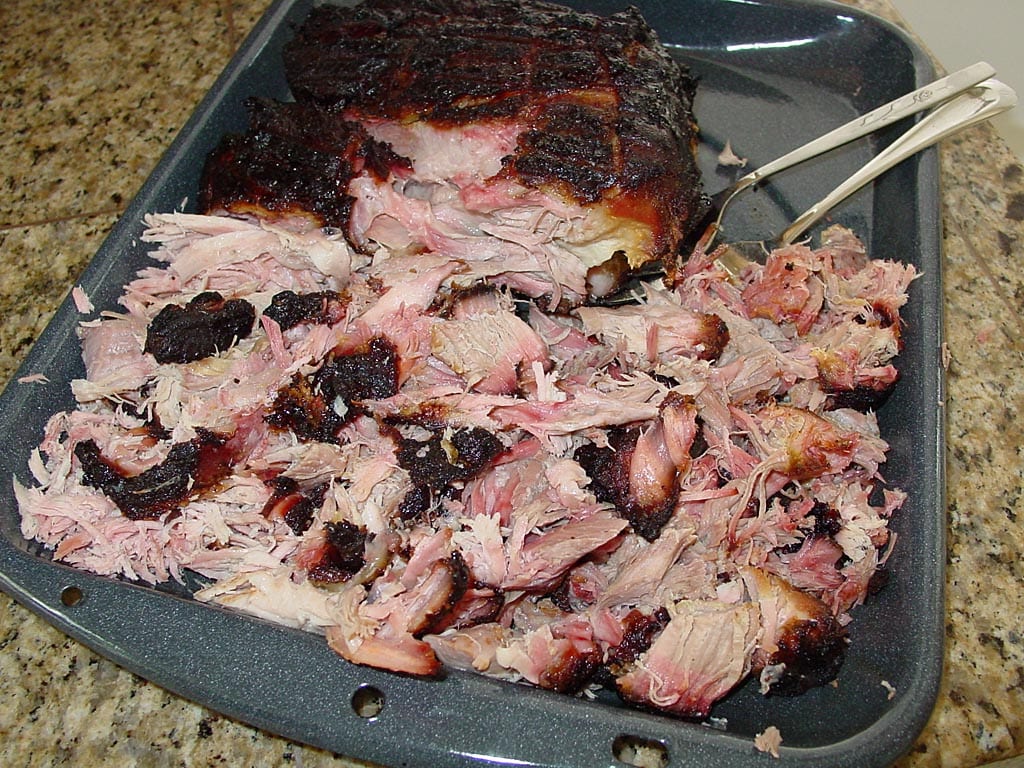 Use heat-resistant gloves or two large serving forks to shred the pork into bite-sized pieces. Remove pockets of fat or anything else that does not look appetizing. 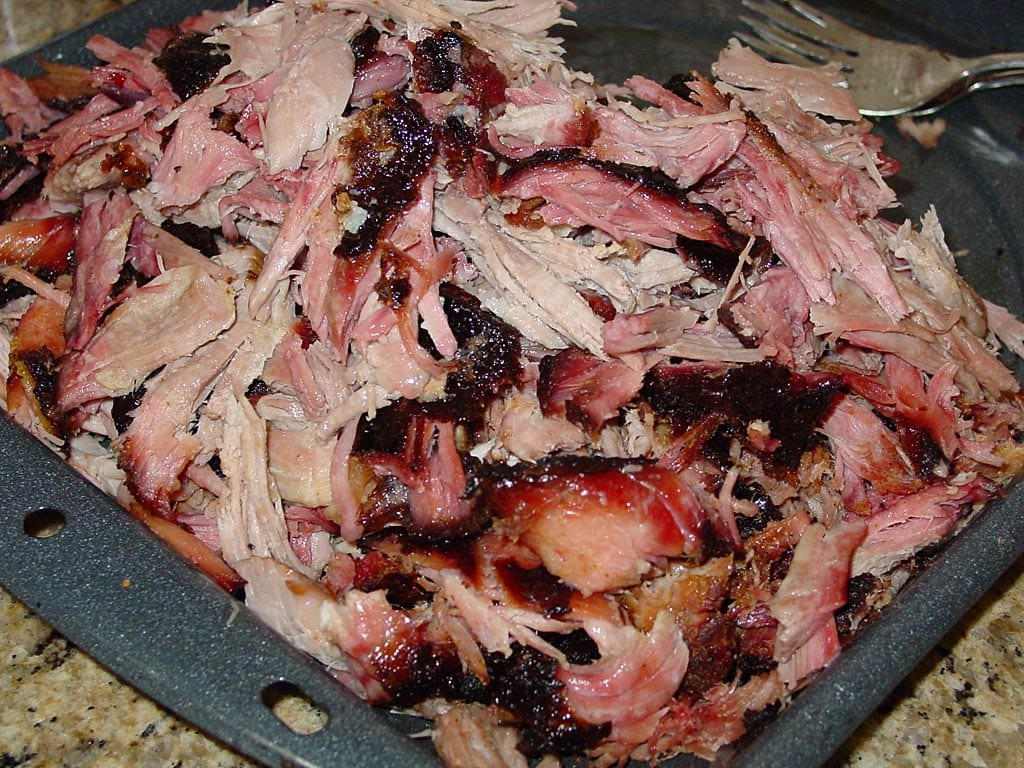 Season the pulled meat with leftover rub to taste, mixing thoroughly. You can even stir in a bit of thinned barbecue sauce. Make sure the dark, outside pieces of “bark” are distributed throughout the mix. Serve with your favorite barbecue sauce on the side.

These photos show pork sliders made from pulled pork. Mix warm barbecue sauce into the meat and place on little hamburger buns or rolls. 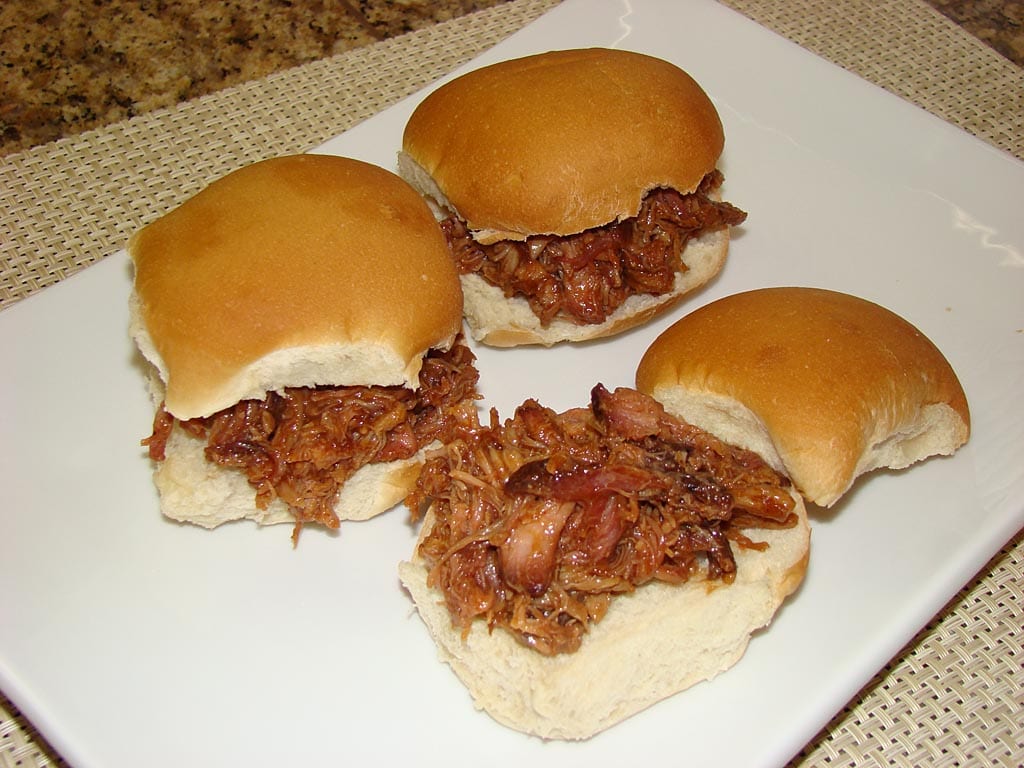 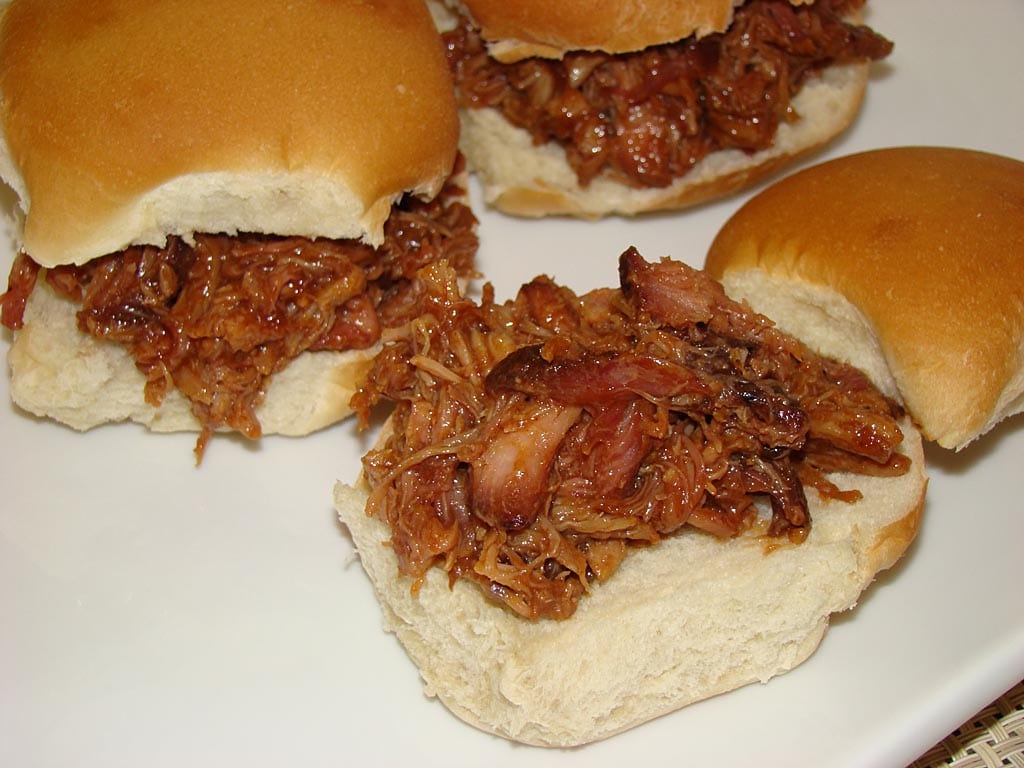 Take a moment to reflect on the pig…

Some folks pickle the feet, cook up the snoots, deep-fry the skin, and make chitterlings out of the small intestines. About the only part we don’t use for food, footballs, or chew toys is the tail…or does that go into hot dogs?