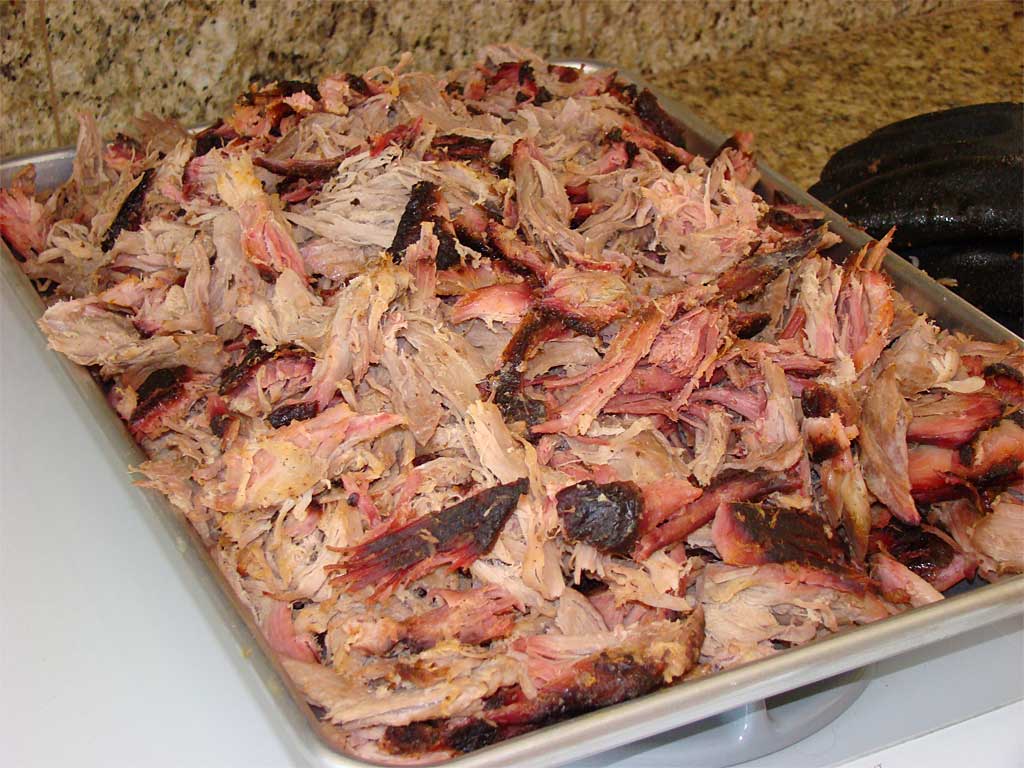 Generally speaking, I’m not a big fan of injecting meat before barbecuing, but it works really well when it comes to pork butt. A good injection solution will add both flavor and moisture to the inside meat, and when pulled and mixed with the dark, flavorful outside meat, you have great flavor in every bite!

Here are some photos I took on October 20-21, 2007 and May 28, 2011 when I cooked pork butts using Chris Lilly’s Six-Time World Championship pork shoulder recipe, which is widely published on the Internet.

Select And Prep The Pork Butts 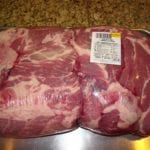 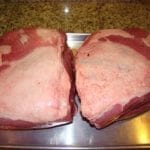 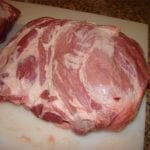 Purchase two bone-in pork butts weighing 8-9 pounds each. Remove the fat cap and trim the meat according to the instructions in the Pork Butt Selection & Preparation article.

The first photo above shows two bone-in pork butts in Cryovac packaging weighing a total of 19.05 pounds. The second photo shows the untrimmed pork butts removed from the packaging. The third photo shows one of the butts after removing the fat cap. 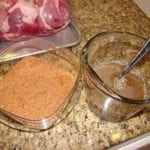 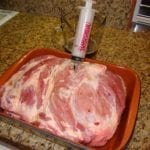 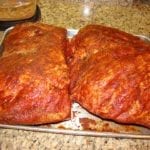 Prepare a batch of pork injection.

Combine all ingredients and stir until sugar and salt are dissolved.

Place one of the butts in a baking dish or food service pan and inject in 12-16 spots with 1/4 of the injection solution. Pick a spot, stick the needle deep into the meat, and slowly depress the plunger while pulling the needle out, then repeat in a different spot. You should be able to inject several spots before needing to refill the injector. The solution that collects in the bottom of the baking dish can be re-injected if you start to run short.

The meat is not a sponge and will not hold all of the injection solution. It is normal for much of it to run out.

Turn the butt over and inject with another 1/4 of the solution, then set the butt aside. Repeat the process with the second pork butt.

After injecting, sprinkle the rub generously on all sides of each butt. Pat the rub to help it stick to the meat.

Let the pork butts sit at room temperature as you fire-up your Weber Bullet.

Use 5 fist-sized chunks of apple smoke wood. Cherry, oak, or another mild fruit wood can be used if apple is not available.

Fire-up the cooker using the Minion Method. Fill the charcoal chamber almost to overflowing with unlit Kingsford Charcoal Briquets. This should be enough fuel to fire the cooker for 12-14 hours, maybe longer depending upon weather conditions and how much meat is being cooked. 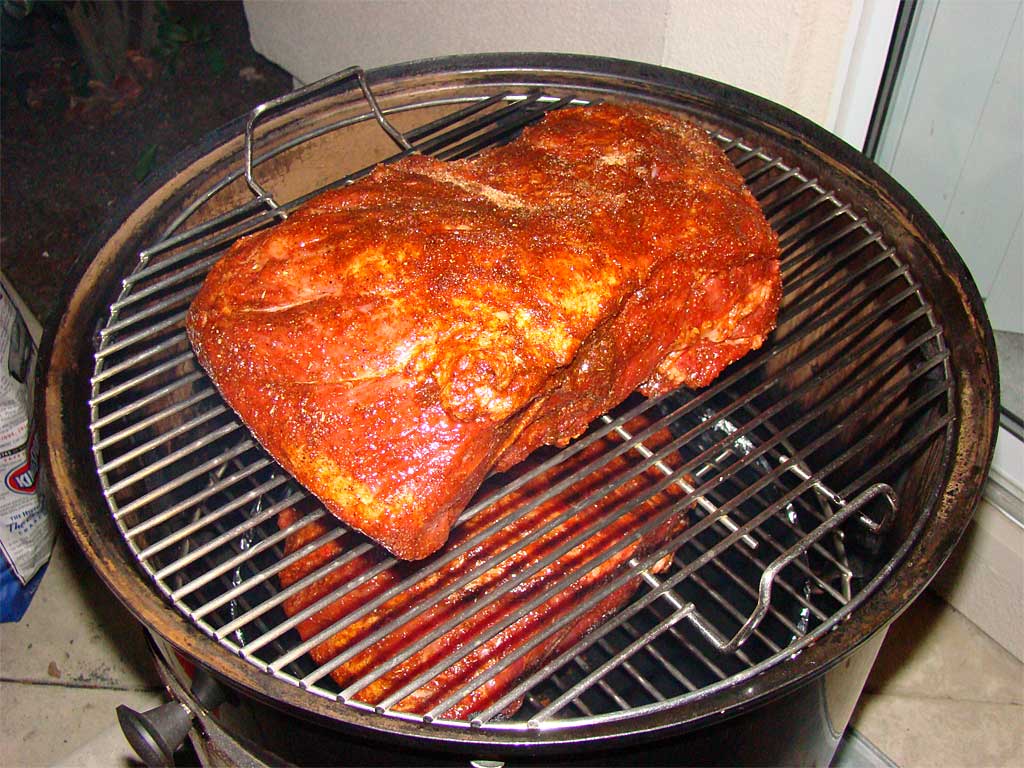 Place the pork butts in the WSM. Set the 3 bottom vents to 100% open. Open the top vent fully and leave it that way throughout the entire cook.

Cook at 225-250°F until the internal meat temperature measures about 195°F with an instant-read thermometer. Since pork butt is made up of a collection of different muscles, check the temperature in 3-4 spots and average the results.

There is no need to turn the meat during cooking. If you wish, you can baste the meat several times with apple juice applied using a spray bottle—I like Martinelli’s Premium Apple Juice. Check the water pan a few times and add water, if necessary. 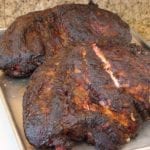 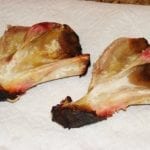 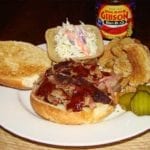 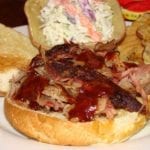 After cooking, cover the butts loosely with foil and let rest for 30 minutes before pulling the meat. See Pork Butt Selection & Preparation for a description of how to pull pork. The meat should pull cleanly from the shoulder blade bone, as shown in the photo above.

Make sure to mix the pulled pork so everyone gets some of the dark outside meat along with the light inside meat. What’s nice about this injection method is that all the meat is nicely flavored inside and out.

I noted in my cooking log that the meat was very dark and crusty on the outside, with a good smoke ring and good moisture on the inside. The meat was flavorful throughout, with a little bit of heat from the rub.

I served the pulled pork on a toasted bun, drizzled with warm Big Bob Gibson’s Championship Red Sauce plus kettle potato chips, coleslaw, and pickle chips on the side. 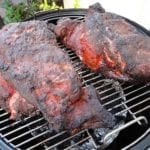 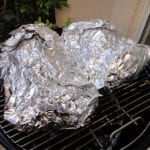 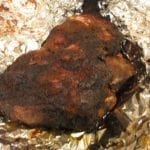 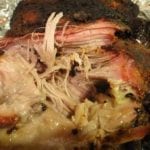 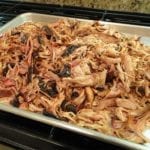 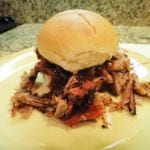 For WSM Smoke Day 7 on May 28, 2011, I tried this recipe again but used a high-heat cooking method instead of the “low & slow” method described above. This cuts the cooking time to 5-6 hours and the results are just about as good.

Fill the WSM charcoal chamber half full with unlit Kingsford Charcoal Briquets and spread one full Weber chimney starter of lit briquettes over the unlit charcoal. Line the water pan with aluminum foil but don’t use any water.

Assemble the cooker and place the injected and rubbed pork butts on the top grate. Set the three bottom vents to 100% open. Open the top vent fully and leave it that way throughout the entire cook. Add the same type and amount of smoke wood described earlier in this article.

Adjust the bottom vents as necessary throughout the cooking process to maintain a temperature of 325-350°F measured at the lid.

Check the internal temperature of the pork butts after 3 hours of cooking. When they measure 160°F with an instant-read thermometer, wrap each one in aluminum foil and put them back into the cooker.

Check the internal temperature again after 2 more hours of cooking. Continue to cook until the butts reach 195°F.

There’s no need to baste or rotate the pork butts during the cooking process.

Let the meat rest for at least 30 minutes before pulling.

The photos above show the nice smoke ring I got using this method. The fifth photo above shows the pulled pork that resulted from just one of the pork butts. The last photo shows a pork slider that’s overflowing with pulled pork to the point that you can’t see the bottom bun. I guess I got a little carried away!