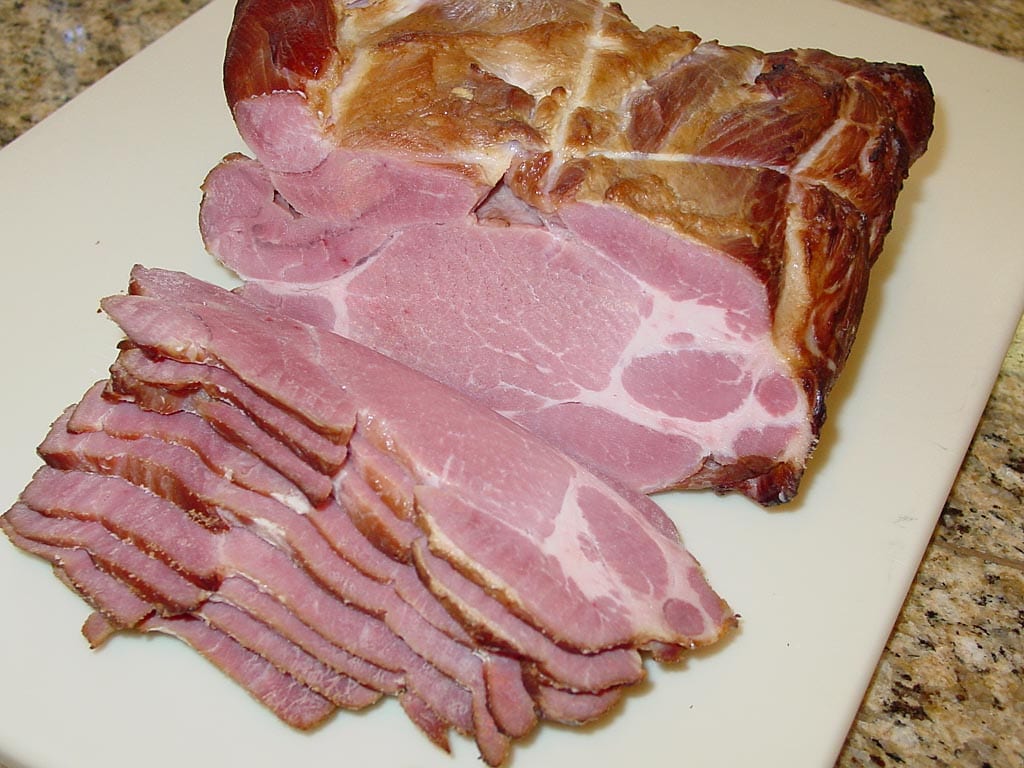 Buckboard bacon is made by curing fresh, boneless pork butt, then smoking it just to a food-safe internal temperature. It is then sliced and pan fried in a skillet similar to bacon. Hi Mountain Seasonings makes a very popular curing mix for buckboard bacon which many members of The Virtual Weber Bulletin Board rave about online.

Here are some pictures I took on February 8-18, 2006 when I cured and cooked buckboard bacon on the WSM. 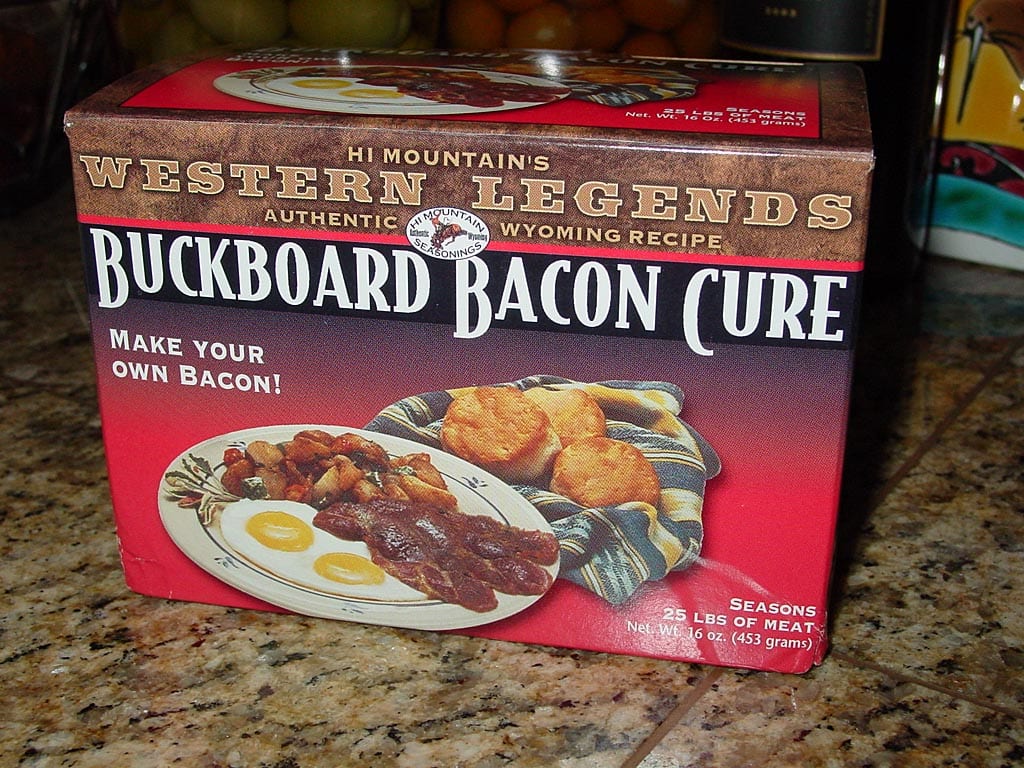 You can order Buckboard Bacon Cure at Amazon.com or directly from Hi Mountain Seasonings.

Buy two boneless pork butts in Cryovac packaging weighing about 14 pounds. Trim all large areas of external fat and anything that doesn’t look edible. You will be left with about 11-12 pounds of trimmed meat.

Hi Mountain says that the curing process works best when the meat is 3″ to 3-1/2″ thick. Trim off some meat or butterfly thick areas to achieve the suggested thickness. 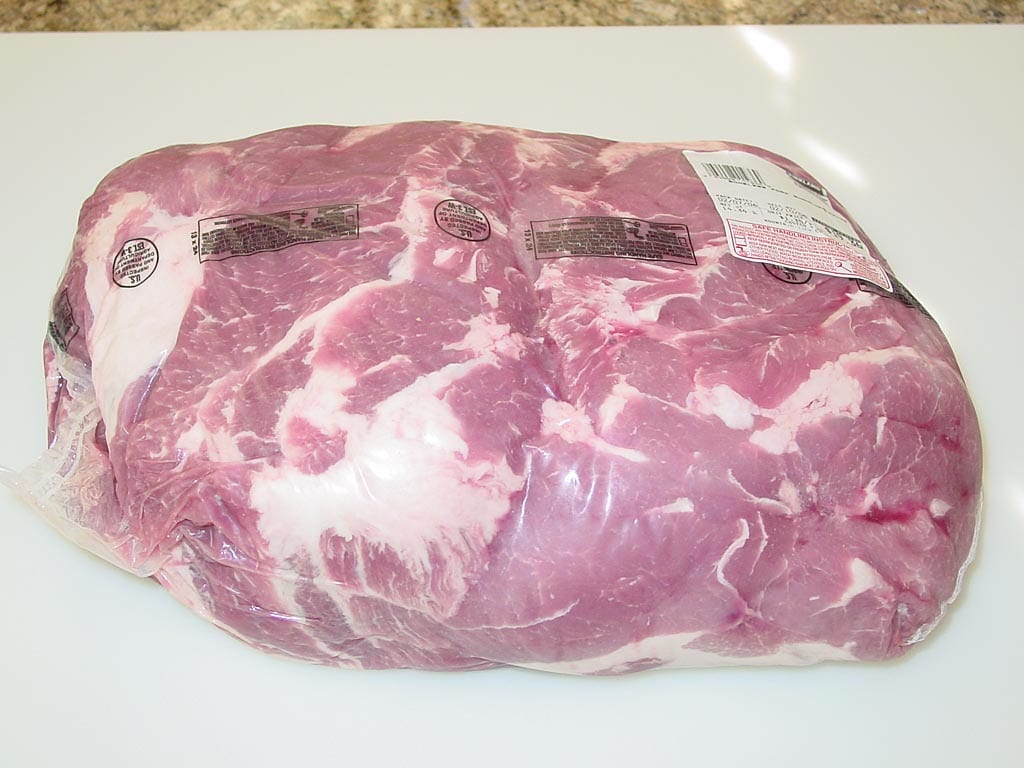 This photo shows the two butts after trimming 3.25 pounds of external fat and scrappy bits, leaving 11.09 pounds of pork goodness. Notice that the butt on the left is bigger and thicker than the one on the right. I made a series of cuts in the thicker areas to butterfly the meat so it was no more than 3-1/2″ thick. 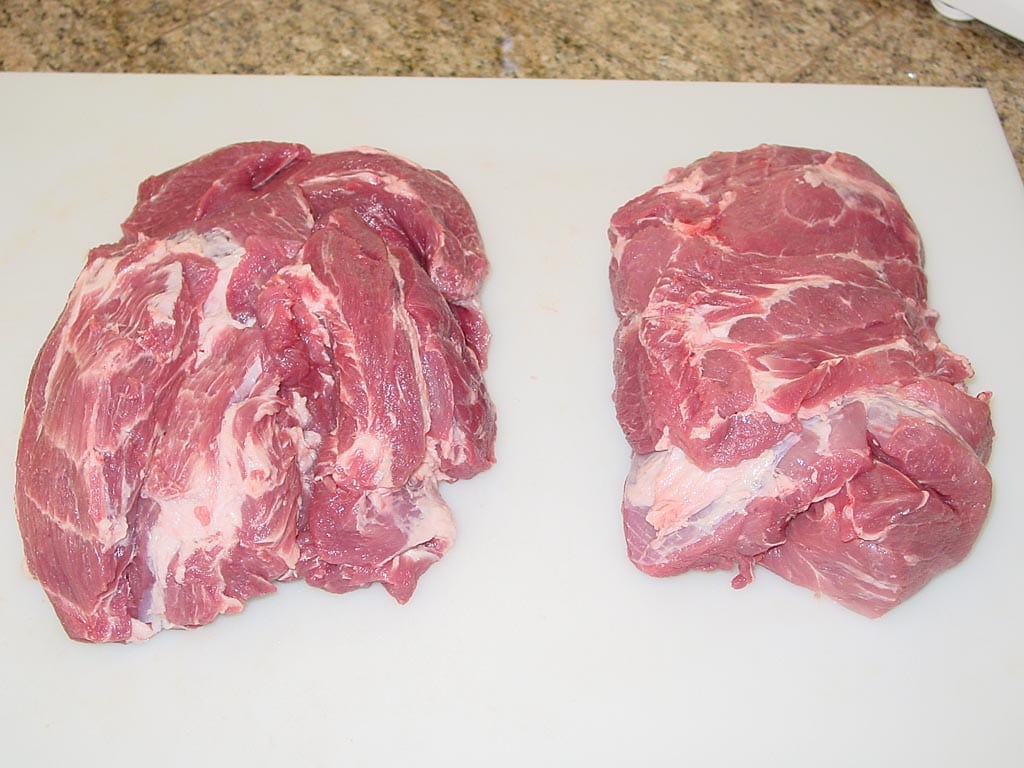 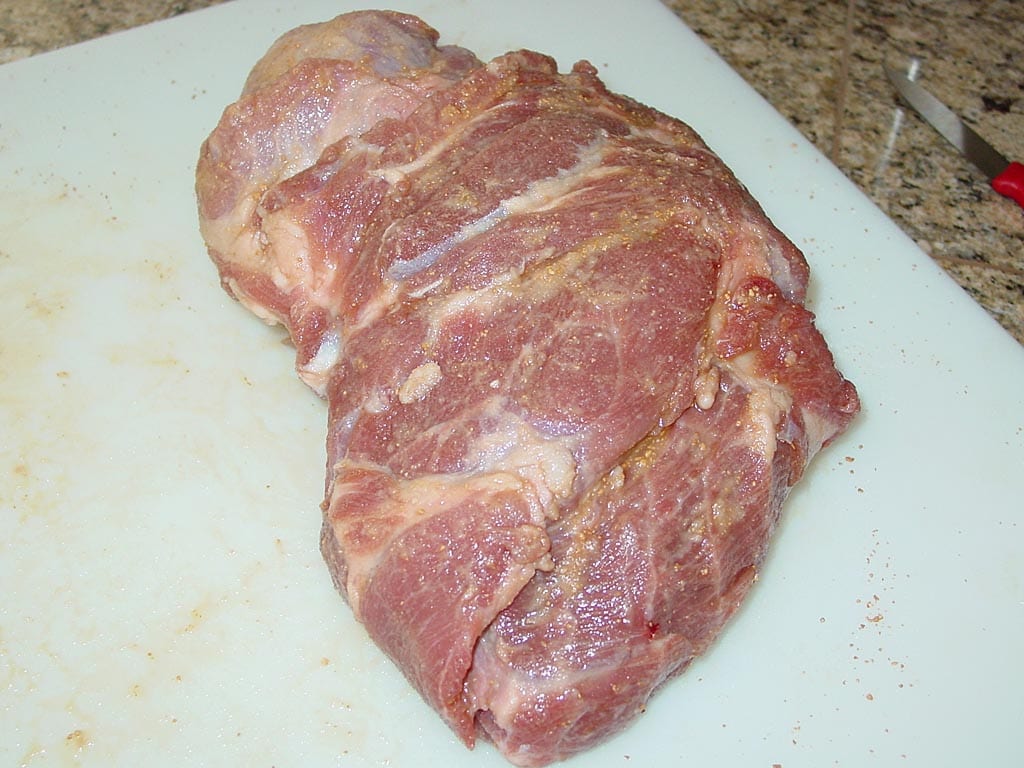 Hi Mountain says to use 1 Tablespoon + 1-1/4 teaspoon of cure for each pound of meat. To keep things simple, just use half of the 16 ounce box for 11-12 pounds of trimmed pork butt.

Apply the cure evenly to all surfaces of the meat, including the cavity where the bone was removed. Make sure to rub the cure into all the nooks and crannies. The salt and sugars are very fine and will dissolve quickly. Eight ounces of cure may seem like too much, but it’s not—use it all, leaving any excess on the meat.

Place each piece of meat into a 2-gallon Ziploc storage bag or in a non-reactive container with a cover (or use plastic wrap to cover). Scrape up any excess cure from the work surface and put it in with the meat.

Cure The Pork Butts For 10 Days 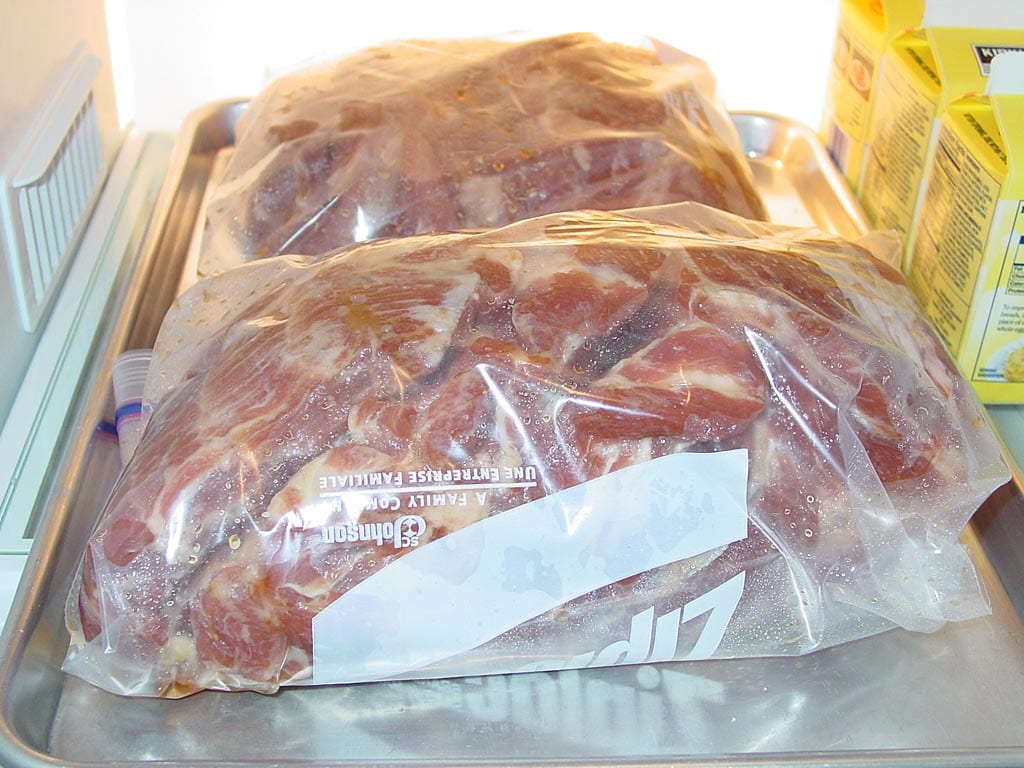 Cure the meat in the refrigerator for 10 days, turning over once after 5 days. There is no need to remove the liquid that accumulates in the bag or container. 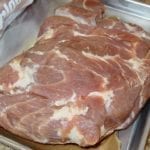 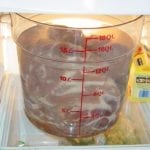 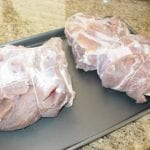 The first photo above shows how the pork butt looks after curing for 10 days.

Place the meat in a large container and cover with cold water. Refrigerate for two hours. Discard the water and rinse the meat thoroughly under running water, making sure to rinse out the bone cavity and all the nooks and crannies.

Pat the meat dry with paper towels. Tie in several places with kitchen twine to give the meat a compact shape. Cover with plastic wrap and let sit at room temperature for 1 hour before cooking.

The instructions for Hi Mountain Buckboard Bacon seem to be written for an electric smoker. They suggest that you cook the meat at 150°F for 45 minutes without smoke, then at 200°F with smoke to an internal temperature of 140°F, then “turn off heat” and leave the bacon in the smoker for 1 hour to cool.

Here’s how I simplified the process:

Light the cooker using the Minion Method. Fill the charcoal chamber half full with unlit Kingsford Charcoal Briquets. Light 20 briquettes using a Weber chimney starter and spread them over the unlit briquettes. Place a small amount of dry smoke wood on the lit coals. You don’t need to use much—several small pieces equivalent of a single fist-sized chunk is sufficient. A mild wood like apple is a good choice. 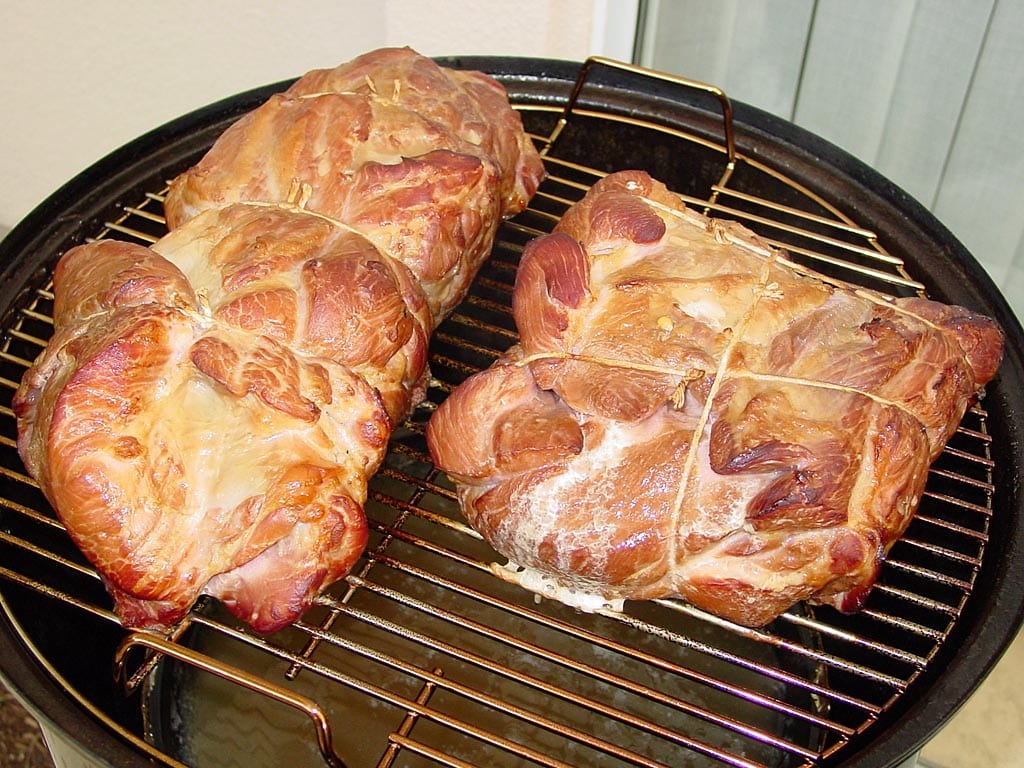 Cook to an internal temperature of 140°F measured in the center of the meat.

Here’s how the cooker temperatures and vent settings went during the cook:

Remove the bacon from the cooker. Let cool at room temperature for 90 minutes, then wrap with foil or plastic wrap and refrigerate overnight.

Hi Mountain says that thin-sliced buckboard bacon will cook twice as fast as regular bacon. I found it hard to cut thin slices using an electric knife, so I ended up with the thicker slices shown in these photos.

The meat is extremely lean compared to regular bacon. I tried cooking it in a cast iron skillet, but the meat stuck like crazy to the pan. For the next batch I used non-stick cooking spray, which helped. Later, I used a non-stick skillet, which worked the best.

The texture and taste of the cooked product reminds me a lot more of ham than bacon. Since the meat is so lean, it does not fry in its own fat like regular bacon does.

Cut the remaining buckboard bacon into slices or chunks and freeze for future enjoyment.