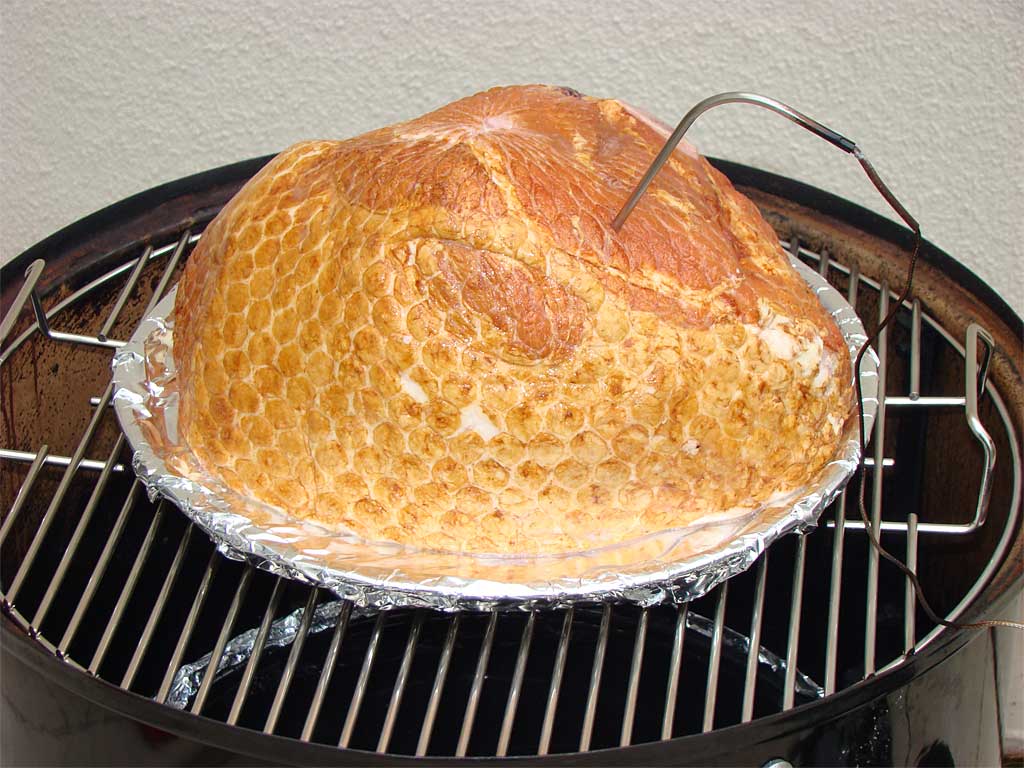 Heating a “ready-to-eat” ham using the Weber Smokey Mountain Cooker is quick, easy, and makes a great addition to your holiday table. This one with an apricot and whole-grain mustard glaze is inspired by a recipe from Martha Stewart.

Choose A “Ham With Natural Juices” 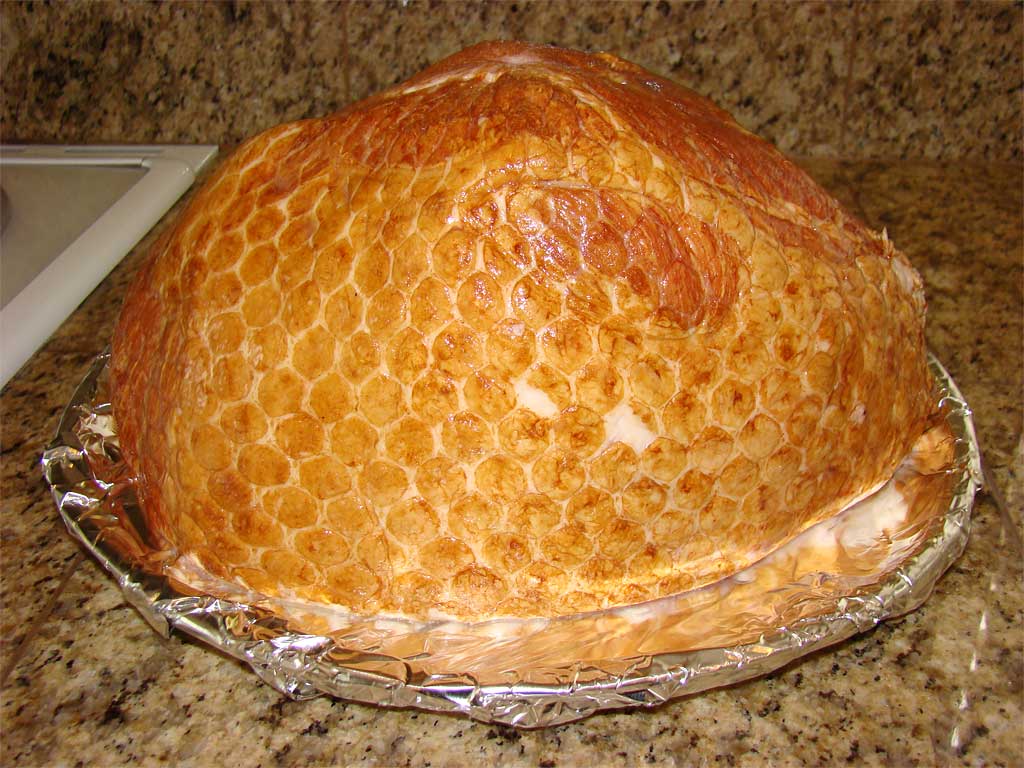 Purchase a half ham labeled “ready-to-eat”, meaning that you don’t have to cook the ham before serving, you just need to heat it up. Also, look for the term “ham with natural juices” on the label. This indicates a high-quality ham.

Remove the ham from its packaging and place it face down on a foil-lined pan that will fit on the top cooking grate in the WSM. The ham shown here is a butt-end, ready-to-eat half ham with natural juices, weighing 10.62 pounds.

To learn more about the various types of ham and ham terminology, visit the Ham Selection & Preparation page.

The ham I used was a high-quality applewood smoked ham. I decided not to use smoke wood for added flavor, knowing that I would get just a bit of flavor from the charcoal alone.

Depending on your ham, you may want to use 2 chunks of apple smoke wood. Each chunk should be small, for example 3″ x 2″ x 2″ or similar. In this case, a little bit goes a long way—you don’t want to overpower the meat. Another mild wood like cherry or oak can be used if apple is not available.

Fire-up the cooker using the Minion Method. Fill the charcoal chamber 1/2 full with unlit Kingsford Charcoal Briquets, then light 20-40 briquets with a Weber chimney starter and spread them over the unlit ones. Place any smoke wood chunks on top of the light coals.

Put the water pan in the cooker and fill it with cool tap water to help with temperature control. 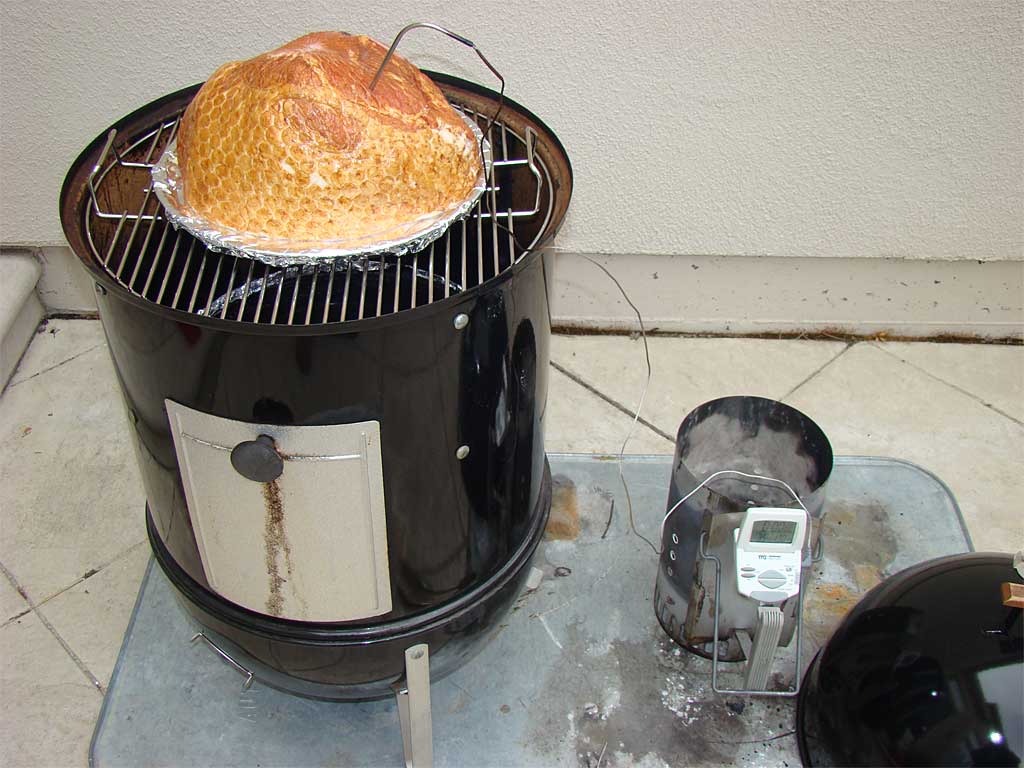 Assemble the cooker and put the ham on the top cooking grate. Insert a probe thermometer in the thickest part of the ham to monitor internal temperature during cooking.

Heat the ham at 225-250°F to an internal temperature of 110°F. Remove from the cooker and use a sharp knife to score the fat in a diamond pattern, making the lines about 3/4″ apart and 1/4″ deep. Brush with 3/4 of the glaze (see recipe below) then return the ham to the cooker.

Continue heating the ham until it reaches 120°F internal temperature, then brush with the remaining glaze. Return the ham to the cooker. It is ready to serve when it reaches 130°F internal.

Remember, there’s no cooking involved here…a ready-to-eat ham is already fully cooked, so you’re just heating the ham to serving temperature and glazing it with the apricot/mustard sauce. This may seem like a low finishing temperature, but anything much higher risks drying out the ham.

Here’s how the cooker and meat temperatures went for this ham.

You’ll need the following ingredients for the glaze:

No need to choose a fancy brand of preserves. Use whatever is cheap and available.

In a 1-quart pot, bring apricot preserves to a simmer over medium-high heat. 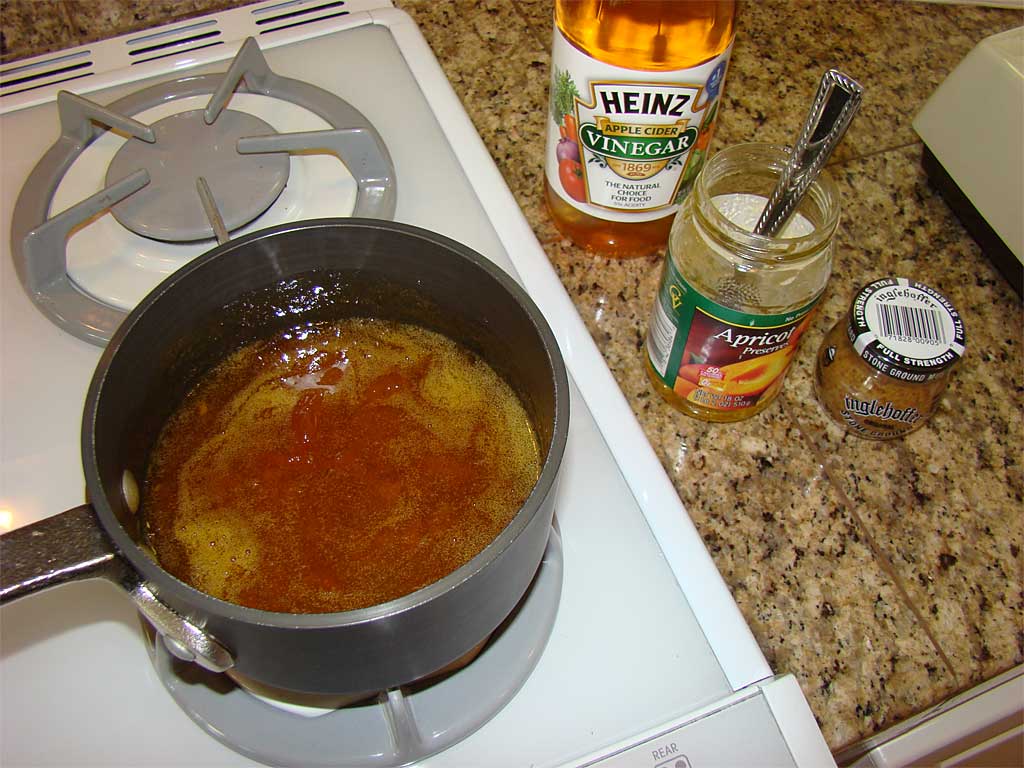 Place preserves in a blender and purée until smooth, about 2 minutes. 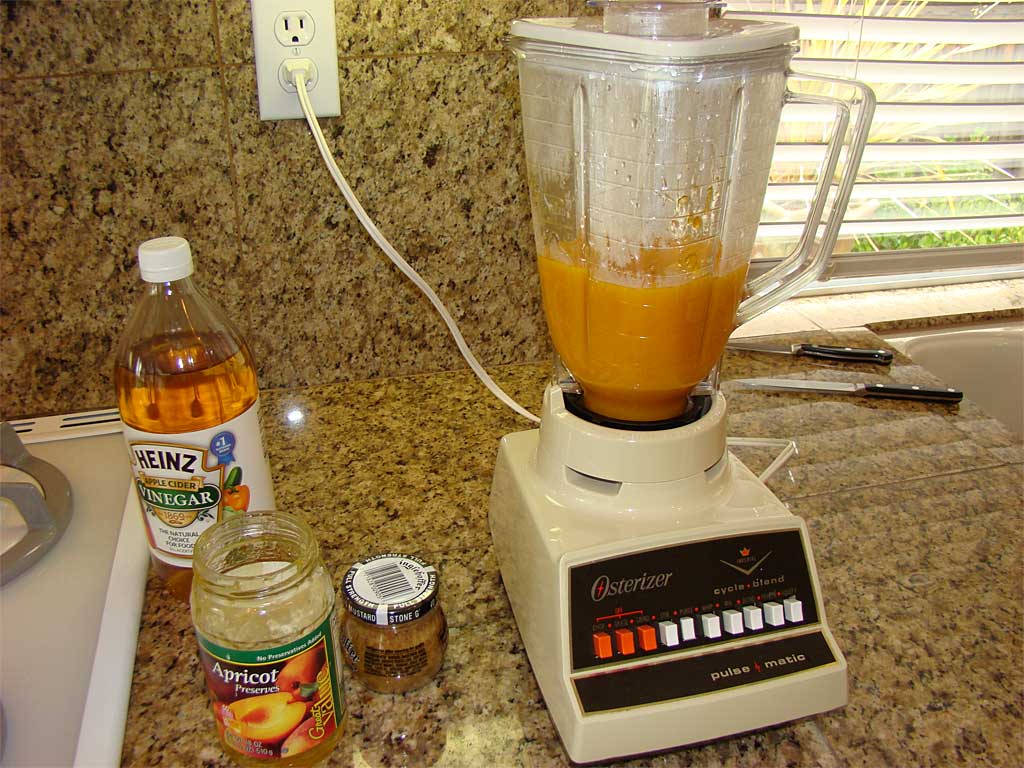 Pass through a fine sieve. You should be left with slightly less than 1/2 cup of preserves. 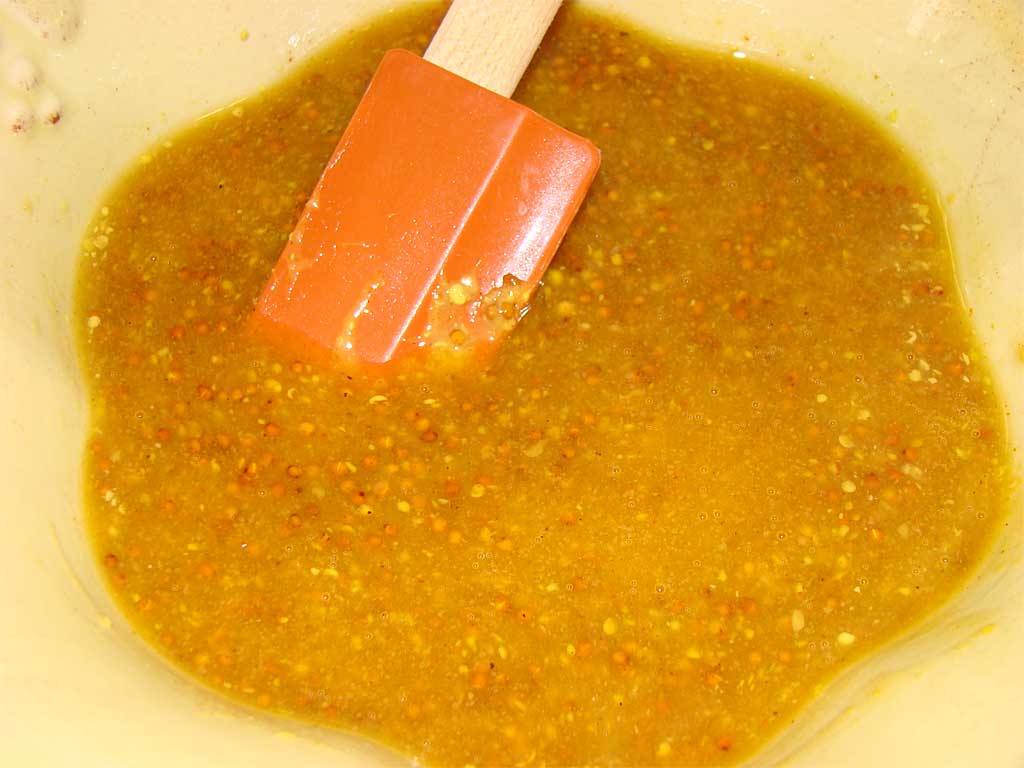 Apply glaze to ham as directed.

When the ham reaches an internal temperature of 130°F, it’s ready to serve. This photo shows the finished ham served with roasted potatoes, pearl onions, and sprigs of thyme. This photo shows a close-up of the diamond-scored and glazed surface of the ham. 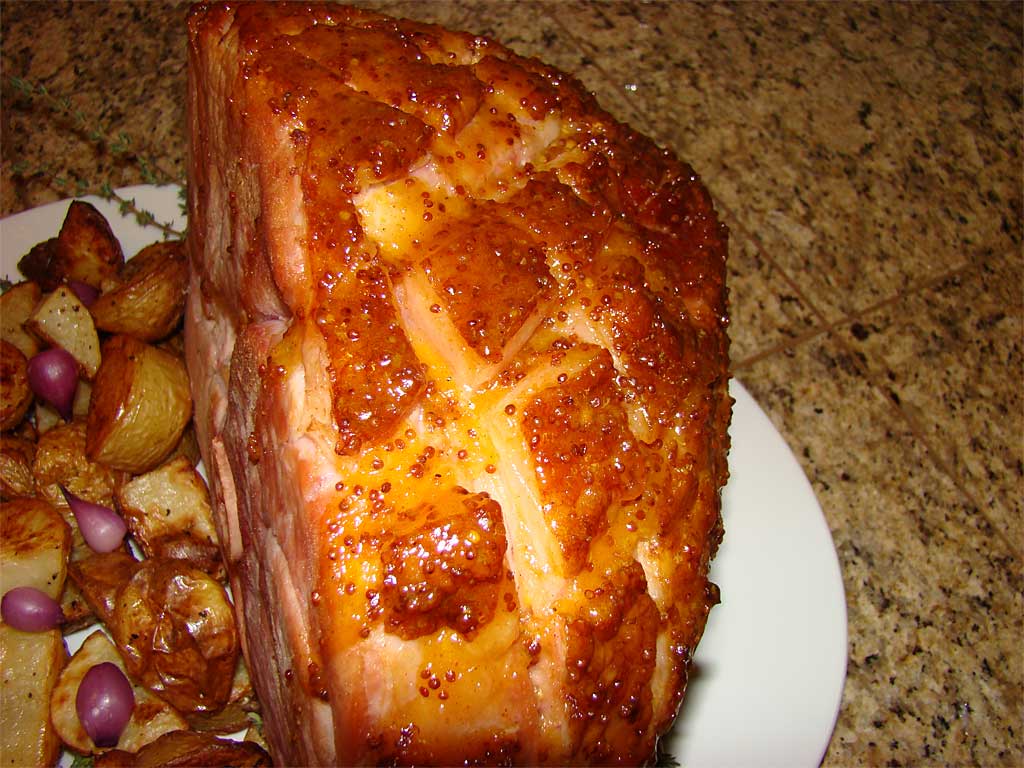