Note: It is my sad duty to report that Dean Torges passed away on November 4, 2016 after a battle with cancer. A celebration of his life was held in Ohio on Earth Day, April 22, 2017. Dean was a member and frequent poster on The Virtual Weber Bulletin and we miss him very much.

Dean Torges is one of these interesting people. Dean lives in Ostrander, OH with his wife, Mary, and is a frequent visitor to The Virtual Weber Bulletin Board. In addition to smoking meat, Dean’s passions include writing, furniture making, vegetable gardening, fishing, and especially hunting with bow and arrow and making archery equipment.

About his website, The Bowyer’s Edge, Dean says, “It is a mission of mine to present a more honest portrayal of the hunting archer than the media and popular opinion hold. I hope to help visitors come to view the classical hunting archer as one who lives by a code of conduct that holds creation and the cycle of life in great reverence, a code learned through experiences which mingle his life intimately with all things free and wild.”

Dean has kindly agreed to share this article about Dutch oven cookery in the WSM with The Virtual Weber Bullet. What intrigued me about this article was 1) The idea of exposing the contents of a Dutch oven to the heat and smoke of the WSM for a period of time, then covering the oven to finish the cooking process; and 2) The idea of combining Dutch oven cookery with traditional barbecuing, both in the WSM at the same time.

Moose In A Dutch Oven By Dean Torges

I’ve been looking for a simple way to cook game in the Weber Smokey Mountain Cooker. The task is complicated because game lacks the self-basting characteristics of domestic meat. I decided to combine barbecue and the Dutch oven, reasoning that together they’d produce savory one-dish meals from the tougher cuts of venison, elk and moose, and also allow the introduction of smoke wood flavor while cooking slowly at low temperatures for tenderness and moisture. I used a seasoned 12 quart three-legged cast iron oven placed upon the empty water pan of a WSM, thinking to accomplish these goals in 8 hours at temperatures below boiling.

Note: The dutch oven used by Dean is similar to this Lodge Dutch oven.

For the experiment, I chose a moosemeat roast, a rolled heel of round. It’s the perfect candidate to test this low, slow and lidded method. Without a speck of fat on it, wrapped in silver sinew and laced with gristle, it’s a cut so tough that butchers who grind burger fear it. 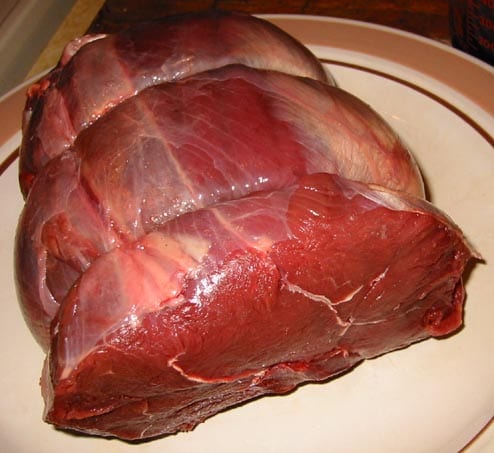 I browned the roast for 20 minutes in 1-1/2 TBSP of lard in an iron skillet, turning it from every direction. 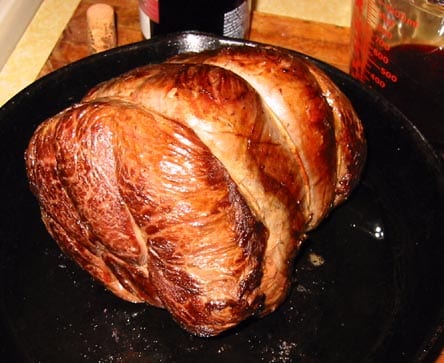 Meanwhile, the uncovered Dutch oven holding two cups of pinot noir was placed in the WSM. While the cooker temperature rose to 250°F through the Minion Method, the wine reduced by half, evacuating the alcohol so it would not linger in the meat and vegetables. I’d hoped to reach and not exceed 225°F, but got distracted with the browning. Wild cherry and white oak smoke wood flavored it as it decocted.

I deglazed the iron skillet with more wine, reduced it and poured it into the Dutch oven. Then came the browned roast and a supply of parsnips, carrots and onions, two small bay leaves and rosemary and thyme for herbs, and 10 pepper corns and a sprinkle of kosher salt for seasoning. I inserted a dial thermometer into the roast, laid on the oven lid, replaced the WSM dome, dialed back the bottom vents and hoped to run for 6 hours before peeking. 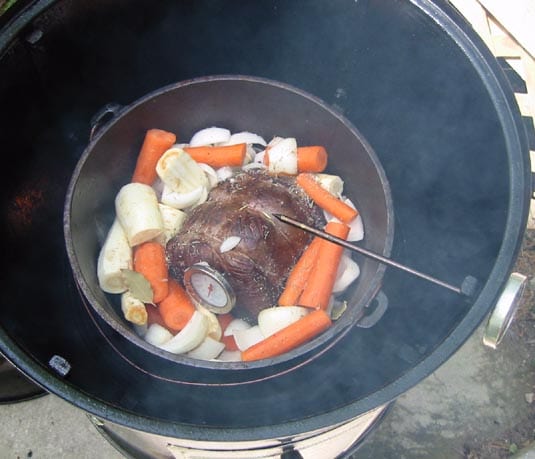 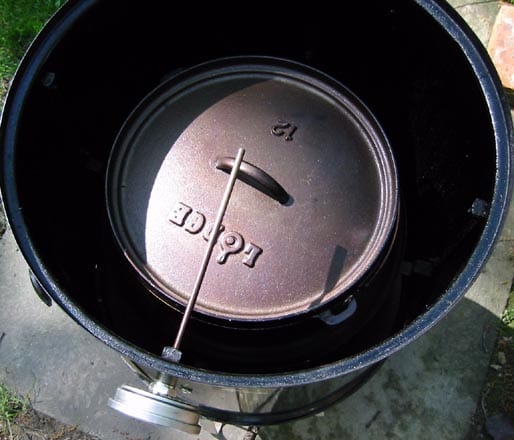 At the 6 hour mark, I uncovered the cook, surprised to see the dial thermometer already at 190°F. A quick finger-sampling of the root vegetables revealed a perfect consistency—not too soft, not too hard, and of very good flavor.

I poured off the broth into a stove top pot and whisked in a modest flour and butter roux, heating until thickened. The gravy didn’t require more broth than was in the oven. I ended up with three cups or more of liquid, of which over half sweated out of the vegetables. Plenty sufficient.

All in all, the meal was excellent. Vegetables arrived on the same time track as the meat, and kept their own identity. Moose was moist enough, fork tender and quite flavorful. The gristle was not objectionable, and I did not bother to pare it from each bite. 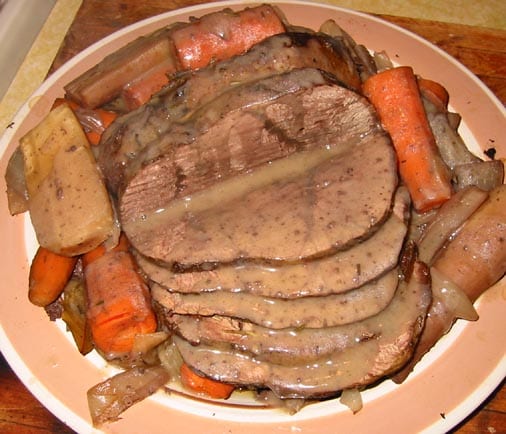 The flavor was good, but a bit too heavily influenced by the wine. 1-1/2 cups to deglaze would have been sufficient, I think, and a can of chicken broth for the balance would have smoothed it out nicely. 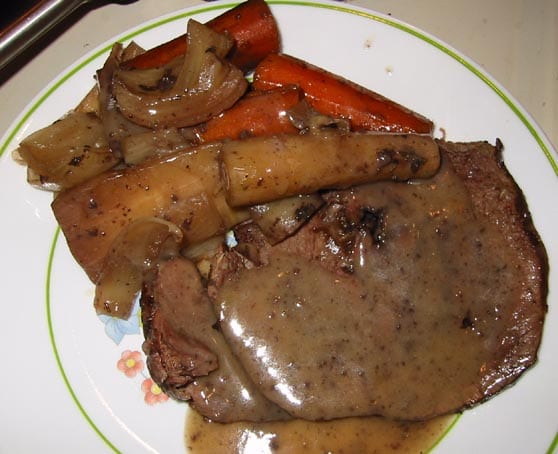 Meal cooked faster than I wanted it to, and probably for a few degrees more than it should have. WSM hovered in the 240°F area too long after I assembled the cook. Though the goal was to run below the boiling point for the duration, and though there was no harm to an initial high temp, I wasn’t quick enough shutting down the dampers and never quite achieved target temperature range for any meaningful length of time. I could have throttled down the dome vent sooner without fear of creosoting the meal (since it was shielded by the Dutch oven). WSM users more experienced than I will have an easier time controlling the cook.

Meat was textured nicely, firm enough to carve, tender to the fork. Gravy is a must, and important enough to this drier meat that it should be made at the end, in my judgment, so that it’s flavor and consistency will be just right, rather than by adding cornstarch or flour at the beginning of the cook, crock pot style. It’s no doubt more conveniently accounted for beforehand, but it’s better this way, and easier to rinse clean the cast iron oven insides.

A Dutch oven functions as part pressure cooker, part crock pot, and is suited for the tougher cuts of moose, elk or venison, which are naturally free of self-basting fat. The classic method of employing Dutch ovens is to surround them with coals and bake in temperatures exceeding 300°F. Such cooks last less than three hours. Longer, lower-temperatured cooks are inconvenient, given the requirements and vicissitudes of open-air charcoal. By placing the oven within the WSM, a hassle-free cook of tough, flavorful cuts under low, regulated temperatures is possible.

The WSM is slow to respond to vent adjustments with this much iron and food in its belly. A 12 quart cast iron oven is a heat sink in itself, weighing in at 21 pounds empty. Still, the WSM could easily accommodate a larger oven, and once this method is perfected, nothing keeps someone from cooking simultaneously on the top grate, either in a flat-bottomed oven placed there, or by shielding the water pan oven with a tent of aluminum foil and laying in meat on the top grate that would cook to completion at a similar rate, such as a pyramid of ribs. The water pan would then reclaim its function as a drip pan. Any rendered fat finding the cast iron through the foil tent would remove easily with a sponge and hot water, and residue would further season the oven during successive cooks, leaving clean-up simple. Seems as well that one could select a meat for the top grate that would work as an indicator species to the “health” of the roast. No need to peek inside the oven then. When indicator selection is done, oven roast can’t be far behind.

I could also see complementary domestic meat combinations, such as a poultry dish with dumplings in the oven and ribs on the top grate, or else two Dutch ovens cooking large amounts of the same dish to quiet the ravenous hordes, no worries. The available combinations to explore could keep someone busy for a summer and beyond.

Try these links for more information about Dutch oven cooking:

Text and photographs: 2003 by Dean Torges, The Bowyer’s Edge, reprinted with permission.