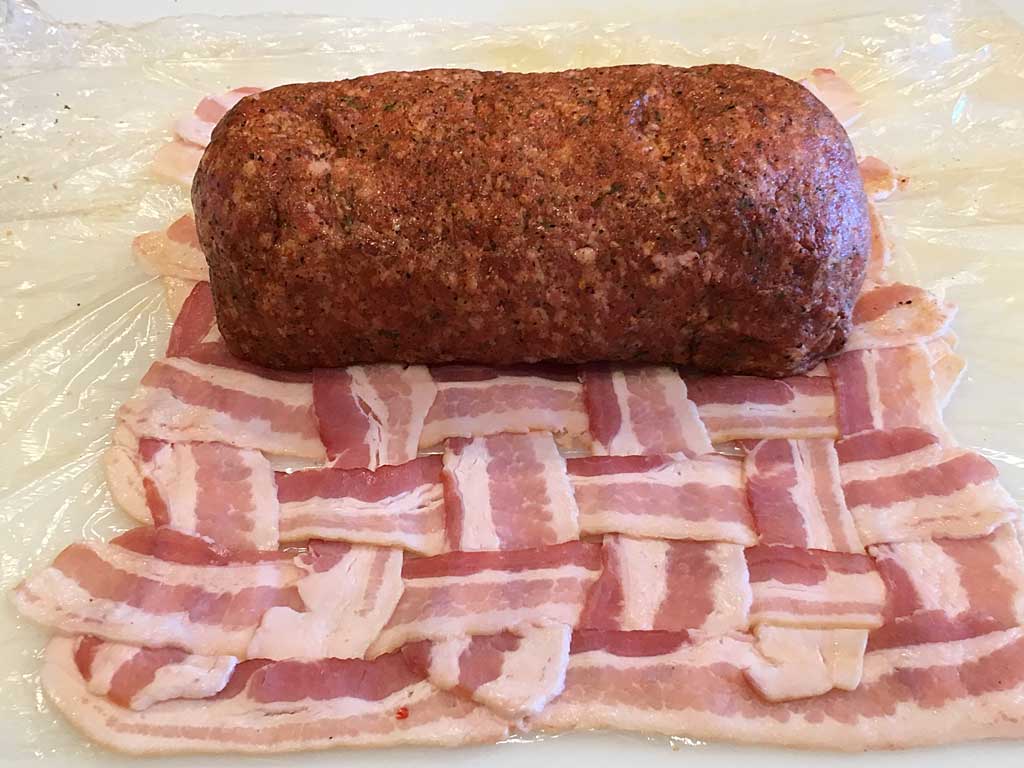 I have wanted to try a bacon weave in my cooking since 2008 when the popular Bacon Explosion first burst onto the food scene. I guess I’m a little slow on the uptake because it took me nine years to get around to it!

On Memorial Day weekend 2017, for WSM Smoke Day 13, I checked this item off my barbecue bucket list by preparing Harry Soo’s Breakfast Bacon Weave Fatty recipe. I saw this dish (but did not get a chance to sample it) while attending Harry’s Slap Yo’ Daddy BBQ cooking class in 2014, but I remember everyone raving about. I thought it would be a good barbecued breakfast item to try that also incorporates the ever-popular bacon weave.

Here are some photos I took when making the breakfast bacon weave fatty on May 27, 2017. 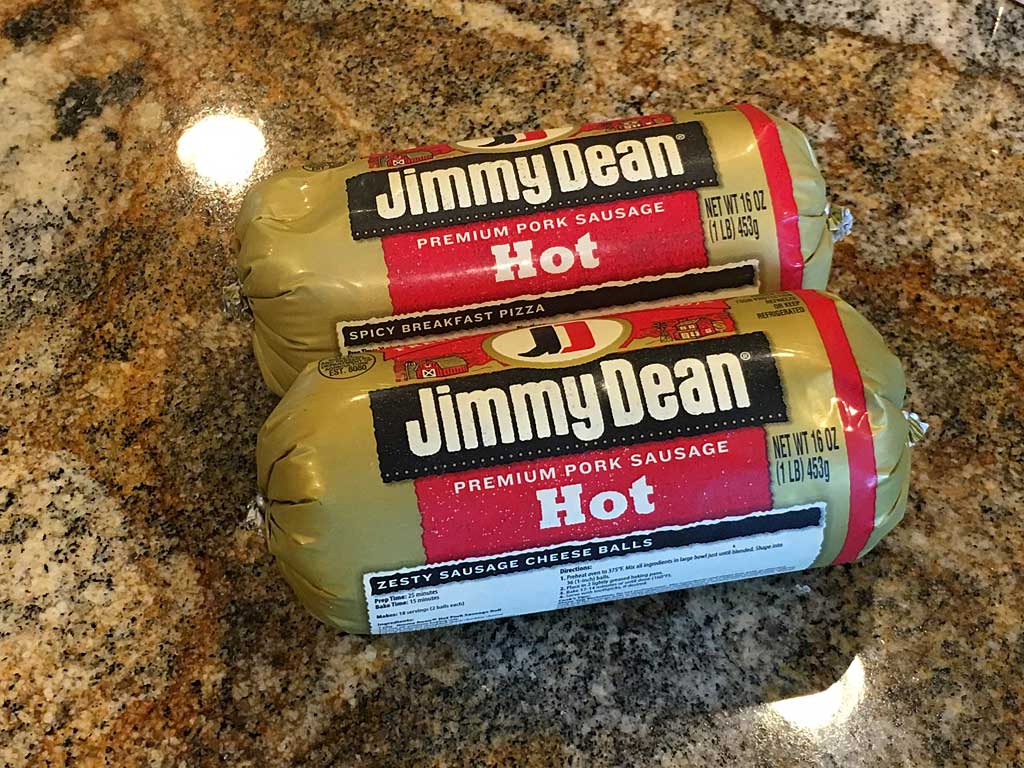 I made a simple version of Harry’s recipe using store-bought sausage. If you’re interested in making your own sausage, Harry includes instructions for making spicy pork sausage in his recipe.

Here’s the list of ingredients I used to make this breakfast fatty.

You can substitute any type of donut or frozen French toast or waffles for the apple fritter, but apple, cinnamon, and pork are a great flavor combination, so I recommend going with the apple fritter. 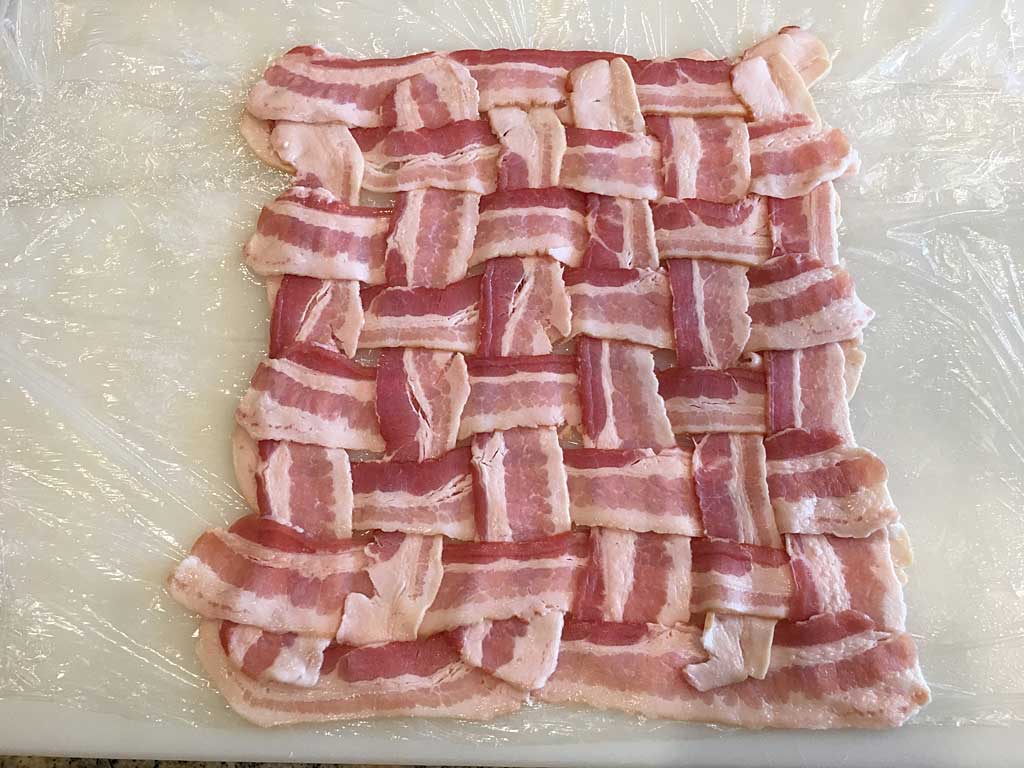 Layout a piece of plastic wrap and arrange 14 bacon slices into a weave pattern with 8 horizontal slices and 6 vertical slices. If you know how to make a lattice top pie crust, this will be a breeze; if you don’t, here’s a video demonstrating how it’s done.

Transfer to bacon weave on the plastic wrap to the back of a rimmed baking sheet pan and into the refrigerator while preparing the remaining ingredients. 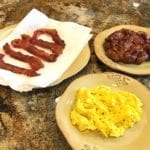 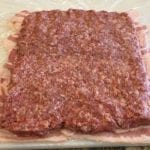 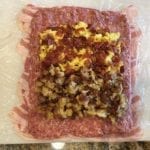 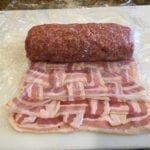 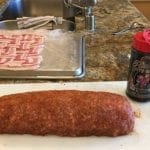 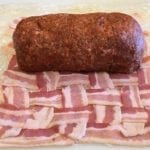 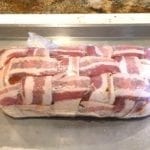 Fry four slices of bacon and crumble into small bits. Scramble the eggs, seasoning with salt and pepper, and set aside. Tear the apple fritter into small bite-sized pieces.

Move the sausage layer with fillings to another part of the counter by lifting its layer of plastic wrap. Roll the sausage layer and fillings from the bottom edge (the fritter end) up toward the top edge, using the plastic wrap to help roll the layer onto itself, forming a log shape. Gently press the exposed edge and the ends of the log to seal all the fillings inside.

Although we took care to form the sausage into a layer that was 3/4″ inside the edges of the bacon weave, after rolling the log may grow in length. To check and adjust the length, with the log still on the plastic wrap, place it back on the bacon weave. Using both hands, press gently from both ends to shorten the log so it’s 3/4″ to 1″ inside the edge of the weave.

Don’t worry if the log feels a bit “loose” on the inside when you handle it. It will firm up substantially once it’s barbecued.

Now sprinkle the sausage log with a moderate amount of barbecue rub on all sides. Remove the log’s layer of plastic wrap and center the log on the bottom edge of the bacon weave. Roll the sausage and weave together to cover the log, pressing the bacon slices down to cover both ends.

Wrap the log tightly in plastic wrap and refrigerate until ready to place in the smoker.

Select The Smoke Wood…Or Not

I used 1 chunk of dry apple smoke wood when cooking this breakfast fatty. Go light on the smoke, the sausage will take on a bunch of it. You could even go with no smoke wood and rely on the subtle smokiness of the charcoal briquettes. 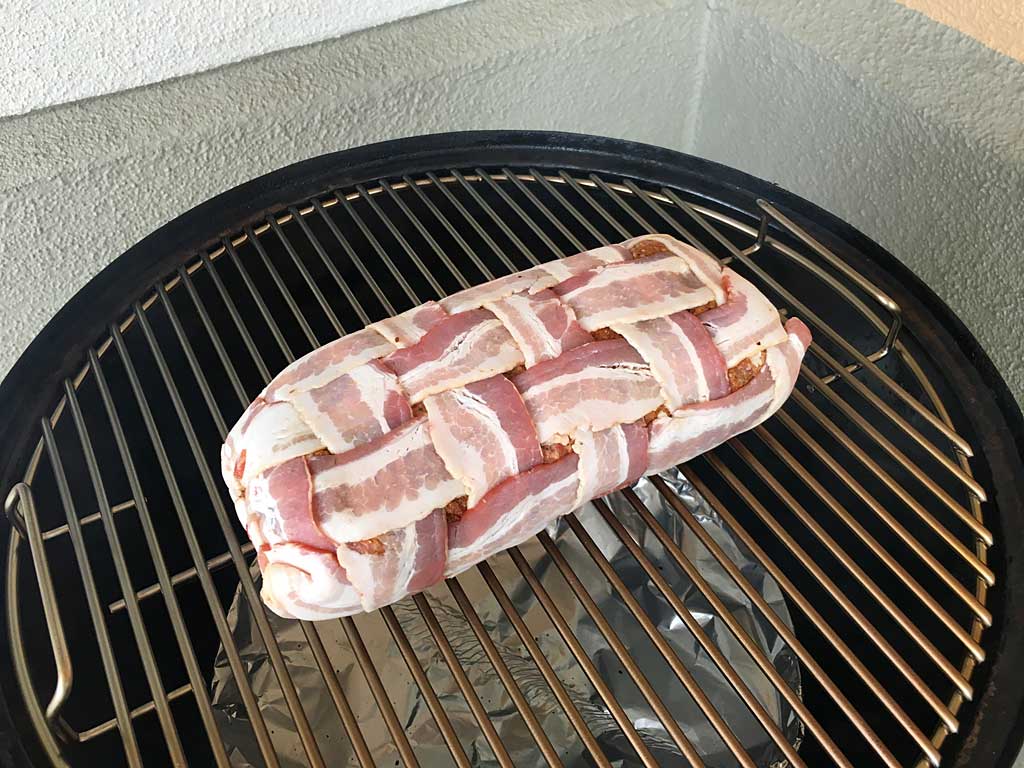 Fire-up the cooker using the Minion Method. Fill the charcoal chamber 1/4 full with unlit Kingsford Charcoal Briquets. Use a Weber chimney starter to light 20-30 briquettes and place them on top of the unlit ones.

Put the water pan in the cooker but leave it empty.

Assemble the cooker and place the breakfast fatty on the top cooking grate. 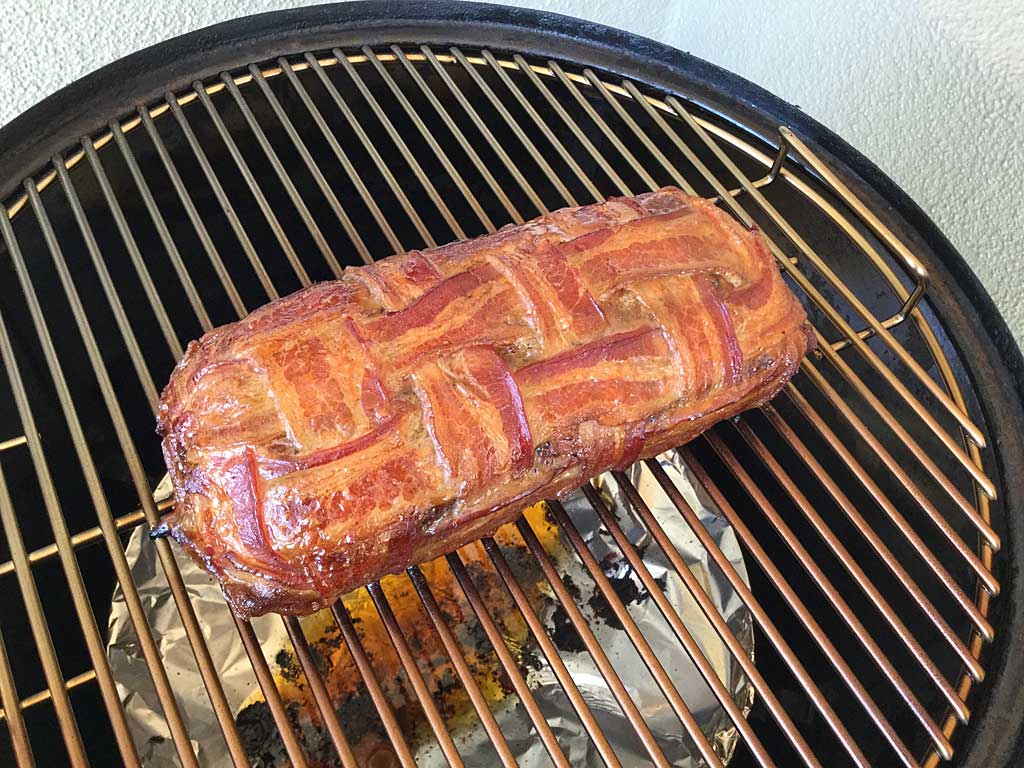 Barbecue the fatty until it reaches an internal temperature of 165°F measured with an instant-read thermometer. My stone-cold fatty going straight from the refrigerator into the smoker took 2 hours 35 minutes…your mileage may vary. 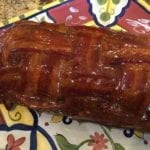 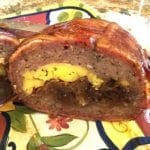 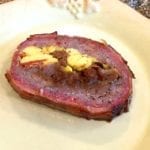 Remove the fatty from the WSM and brush all sides with a thin layer of barbecue sauce. Cut into slices, serve immediately, and enjoy! 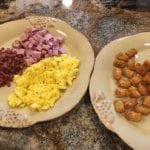 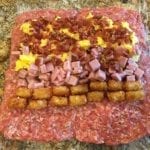 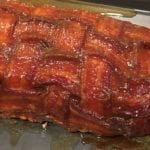 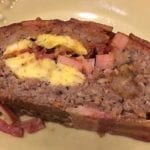 I baked the mini tots until very crisp, fried and crumbled four slices of bacon, scrambled three large eggs, diced two slices of ham, and let it all cool to room temperature before assembling the fatty. You can see the fillings in the photo above.

The whole thing came together as previously described…but not without some kicking and screaming! As you can see, I had way too much filling! I didn’t put all of it in there to begin with, but as I tried to roll up the sausage, I found that it was still too much. I removed some of the tots and ham and was somehow able to successfully roll the sausage log shown above.

It’s also interesting to note that this fatty took less to cook than the previous one, under two hours. So pay attention to the internal temp during cooking, it can be highly variable from one cook to another.

On the bright side, I found that a drizzle of maple syrup tastes great on a slice of this breakfast bacon weave fatty, adding some sweetness that’s missing due to the removal of the apple fritter.

Anyway, it just goes to show that you really can be creative with what goes into (and on) a breakfast bacon weave fatty…but be careful to not overstuff it!

What If My Bacon Weave Is Too Small?

Don’t worry, guys. It happens to all of us sometimes. Your sausage log is well-formed and ready for action, but your bacon weave is not. It’s too small and doesn’t completely wrap around the entire sausage log. Who knows, maybe it’s cold in the kitchen and there’s been some shrinkage.

Here’s what you do: Place the sausage log in the center of the weave. Bring the weave up around both side, leaving an exposed area of sausage on top. Press the bacon weave down on both ends of the sausage. Now roll the bacon-wrapped sausage log over and barbecue it with the exposed side down. No one will ever know that your bacon weave was too small.

If you’re concerned about the exposed sausage sticking to the grate, cook it on a foil-covered quarter rimmed baking sheet pan or on a disposable foil pan.