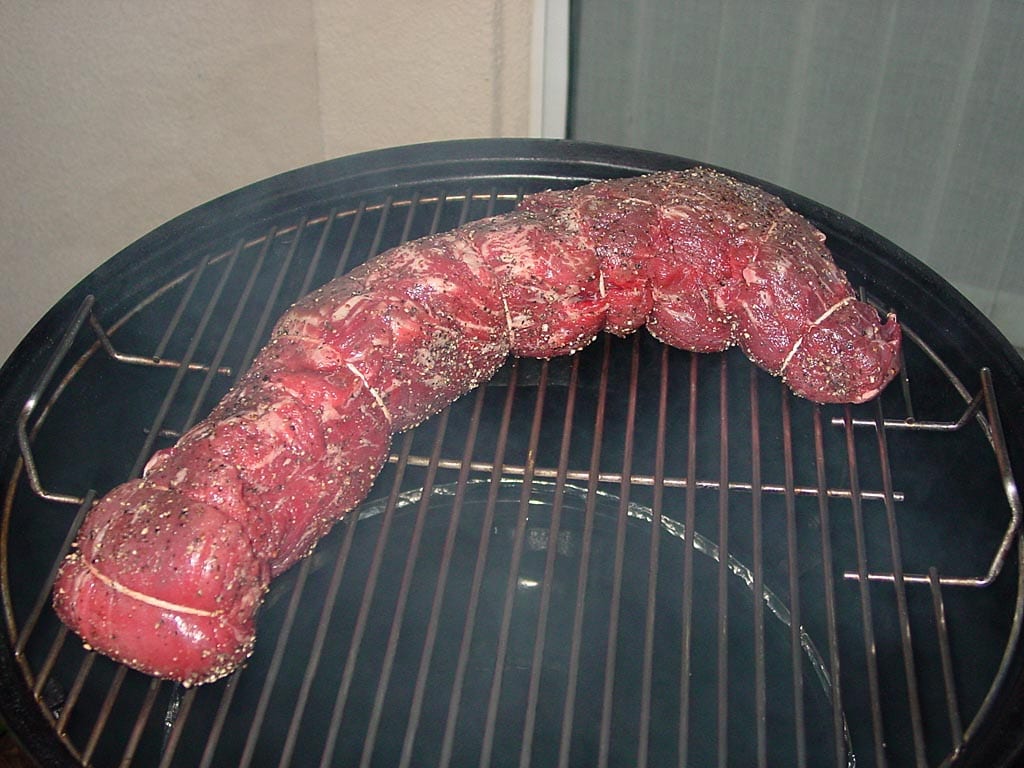 The whole beef tenderloin roast is sometimes called a “whole filet”, a “filet mignon roast”, or a “tenderloin tip roast”. It is a long, tapered muscle located on the inside of the short loin, extending from the 13th rib to the pelvis.

The tail is usually folded under the center section and tied to create even thickness for even cooking.

Beef tenderloin is the most expensive and most tender cut of beef, but it also has a reputation for mild taste because it does not contain a lot of intramuscular fat. Fortunately, with some careful trimming and a little bit of salt, pepper, and smoke, you can transform this cut into something really special for the holidays or any day!

Here’s a description and photos of how I cooked a whole beef tenderloin on November 19, 2005. Be sure to check-out the accompanying video for a quick overview of how to prep the meat for cooking.

Select And Prepare The Tenderloin 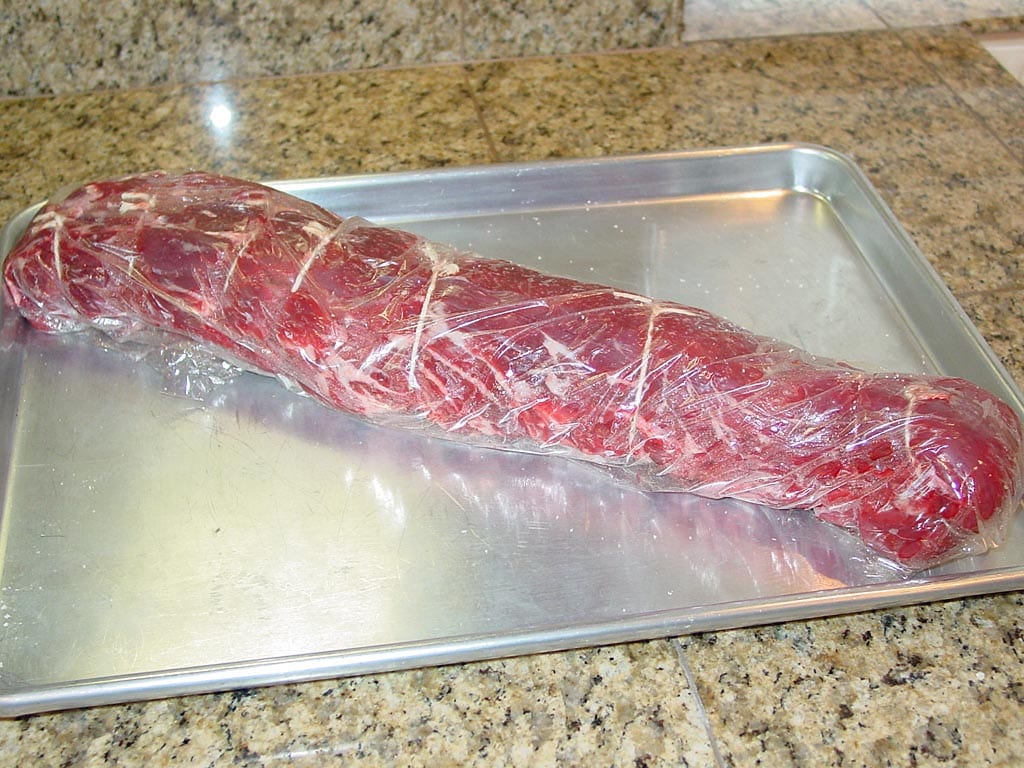 Choose a 5-6 pound, USDA Choice whole beef tenderloin. This cut of meat will cost a ton of money if you buy it from a good butcher fully trimmed and tied. If you want to save up to 50% and are willing to spend 20-30 minutes trimming and tying the meat yourself, then buy a whole tenderloin in Cryovac packaging at a wholesale warehouse store.

I bought the USDA Choice whole tenderloin pictured here at Costco. The photo above shows the tenderloin after I trimmed and tied it. It weighed 5.60 pounds before trimming.

If you want to try your hand at trimming and tying a whole tenderloin, I would suggest that you do it the night before. This gives you plenty of time to work with the meat without feeling rushed.

You will need the following tools:

Here are the steps for trimming the roast. Take your time—remember, this is an expensive cut of meat, and you want to remove the waste without losing much of the valuable meat.

Here are the steps for tying the roast. Tying is done to create even thickness for even cooking and to secure any floppy bits of meat. For a lesson in tying knots, watch the How To Tie A Roast video.

Wrap the tied tenderloin in plastic wrap and refrigerate overnight.

The next day, remove the tenderloin from the refrigerator one hour before cooking it. Pat dry with paper towels.

Sprinkle all sides with 1-1/2 Tablespoons of kosher salt. Wrap in plastic wrap and let sit at room temperature for one hour. This step allows the salt to penetrate the meat and will help it cook more evenly.

Just before cooking, apply a thin coat of olive oil and sprinkle with a good amount of freshly cracked black pepper.

This video demonstrates the process of preparing a whole beef tenderloin for cooking. Click on the video to play.

Fire-up the cooker using the Minion Method. Fill the charcoal chamber 1/2 to 3/4 full with unlit Kingsford Charcoal Briquets, then light 20-40 briquettes using a Weber chimney starter and place them on top of the unlit ones.

Put the water pan in the cooker and fill it with water to help with temperature control. 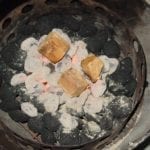 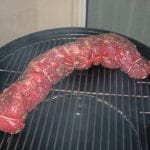 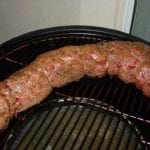 Place 2-3 small chunks of dry smoke wood on the coals. Use a mild wood, and don’t use much of it. I used three small chunks of apple wood, maybe equivalent to a single fist-sized chunk.

Assemble the cooker and place the tenderloin on the top grate. Set the three bottom vents to 100% open. Open the top vent fully and leave it that way throughout the entire cook.

There’s no need to baste or rotate the tenderloin during the cooking process. 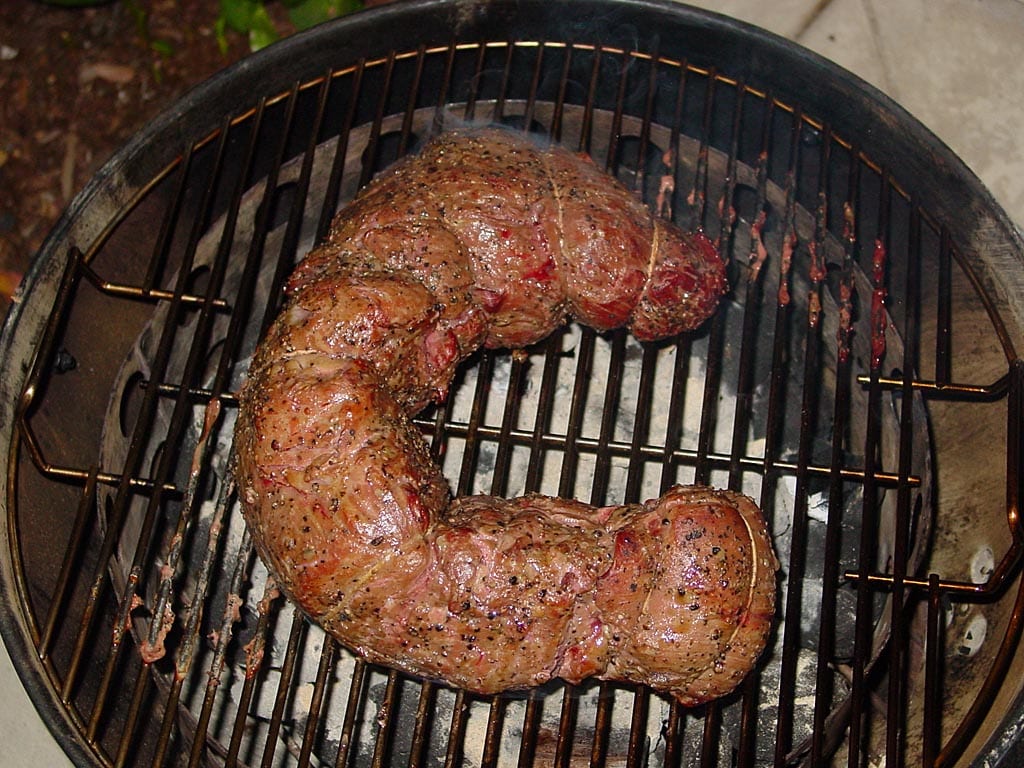 Don’t skip this searing step, because it creates lots of great flavor on the surface of the meat.

Remove the top cooking grate from the cooker and set it aside. Carefully lift off the middle cooking section (making sure not to spill any water) and set it aside. Use tongs to evenly spread out the hot coals in the charcoal chamber, if necessary.

Place the cooking grate directly on top of the charcoal chamber. Sear the tenderloin on all four sides, approximately 2 minutes per side or until browned to your liking. 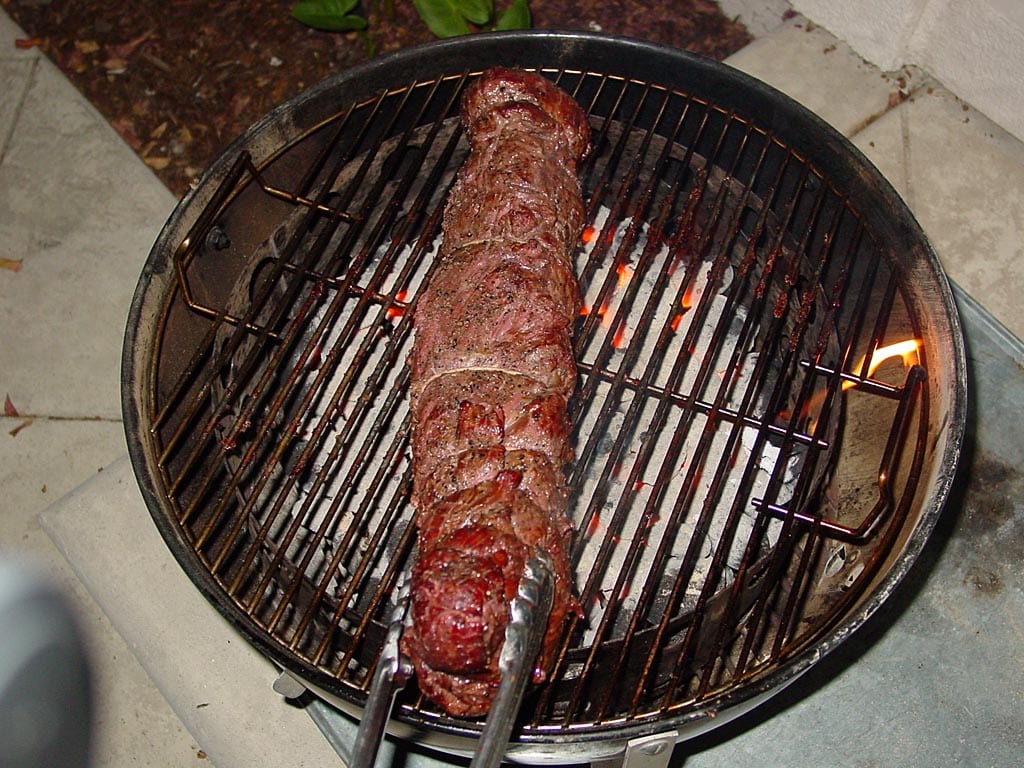 I seared this tenderloin on two sides by curling it into a c-shape, then seared the other two sides by holding the meat on edge with tongs.

Rest Then Slice The Tenderloin 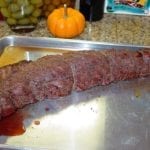 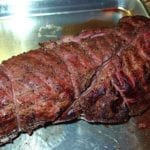 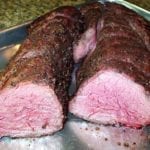 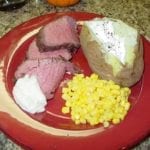 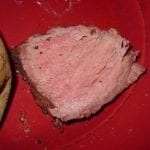 Remove the tenderloin from the cooker. Cover loosely with foil and let rest for 10 minutes before slicing.

Snip the kitchen twine and remove it. Slice the meat into 1/4″ to 3/8″ slices across the grain.

The photos above show the seared tenderloin after a 10 minute rest and the consistent doneness inside the roast. The meat is evenly pink across almost its entire diameter, which is achieved by using the reverse sear cooking process.

Here’s how I described this tenderloin in my cooking log:

Beef tenderloin has a mild flavor, so it is often served with a sauce on the side. Your smoked tenderloin will have more flavor than most, and you may find that a sauce is not necessary.

I like a creamy horseradish sauce with beef, and I’m quite satisfied with the ones I find at the supermarket, especially Beaver Cream Style Horseradish.

If you’d like to try your hand at making a sauce, here are some recipes to get you started.

Whisk the heavy cream for 1-2 minutes until thickened but not yet holding soft peaks. Fold in horseradish, salt, and pepper. Transfer to a serving bowl and refrigerate 30-60 minutes before serving.

In a saucepan over medium-high heat, bring cream to a full boil. Boil rapidly 45-50 minutes until thickened like a white sauce, stirring occasionally. Remove saucepan from heat, add all ingredients. Whisk rapidly until cheeses melt.

To reheat, warm the sauce over low heat until melted, then whisk rapidly until sauce comes together.