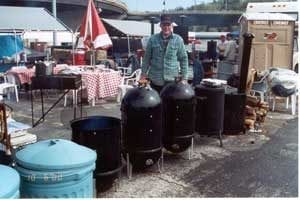 This is Dick of Smokin’ Dick’s BBQ. His team used three Weber Bullets plus two other cookers at the 2000 American Royal. They finished a very respectable 64th place out of 350 teams in the Invitational. 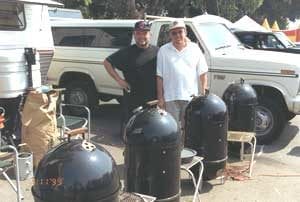 The team is Coyote Road Kill and the cooks are Dan Cannon and Rick Streiff from Agua Dulce, CA. Dan and Rick use four Weber Bullets in competition, one for each category of meat. “The Weber Bullet has made life a lot easier for us,” says Rick. 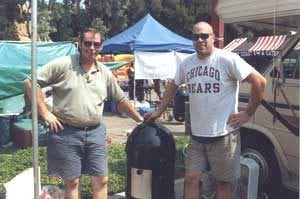 Steve Clark of Riverside, CA and Jay “Jasper” Diener of Torrance, CA represented Riverside Primecuts BBQ at the 1999 Niles, CA cook-off. The Weber Bullet is just one of the pits they use in competition.

Three Weber Bullets are part of Jim McCord‘s arsenal in competition. A new resident of Dublin, TX, Jim says he gets “fabulous food and consistent temperatures from all his Bullets. You can hardly go wrong.” 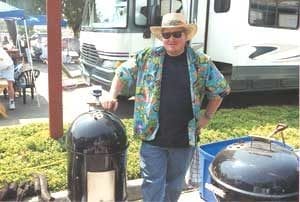 Rob Kelso calls himself a “Weber geek” and says his secret weapon is to cook with his Weber Bullet access door upside down. He even has names for the Weber kettles he uses in competition—Fickle, Dave, and Nancy. For some reason, his Bullet has no name! Interestingly, Rob’s assistants at the 1999 Niles, CA cook-off were vegetarians! Proves you don’t have to love meat to enjoy a good BBQ competition. 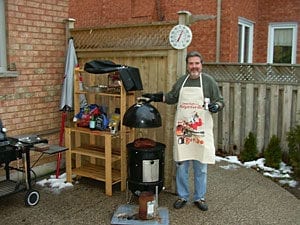 Steve McMurtry from Oakville, Ontario, Canada, sent in this photo taken December 31, 2004. “Just getting warmed up for New Years,” writes Steve. “Pulled pork and cold beer! Nice way to finish the year and start a new one!” By the way, that thermometer in the background reads 10°C (50°F), and those are patches of snow on the ground. Looks like a December heat wave! 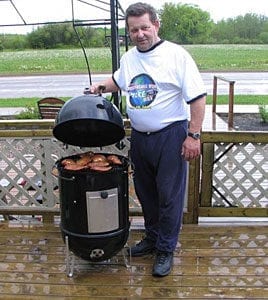 Jim Beauchamp (aka “Smokin’ Jim”) lives in Seven Sisters Falls, Manitoba, Canada. Here he’s showing off the chicken he cooked during the 1st Annual International WSM Smoke Day on May 28, 2005. Jim writes, “The chicken was excellent in spite of the weather. I hope everyone else had a great day.” 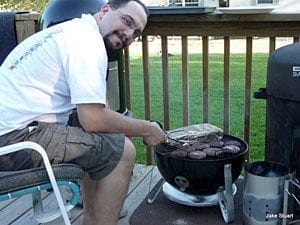 Here’s Jake Stuart from Madison, IN with his Weber Bullet. Jake says, “I know this isn’t the typical usage for a WSM, but I like the versatility of the WSM. I didn’t have a charcoal grill at the time, so I improvised with the WSM. But is has served me well for over 6 years and NO RUST whatsoever. Thanks Weber, keep cranking out the best grills out there!” If you want to learn more about WSM grilling, including the “Weber Egg” configuration shown here, see Grilling on the Weber Bullet. 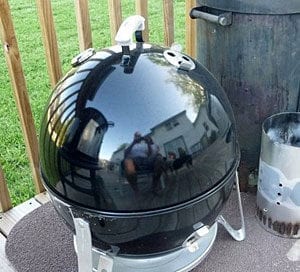