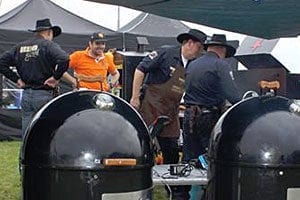 This is BBQGuru.nl, a barbecue team from The Netherlands, shown here competing in Germany. Team member Harry Havinga writes, “We do KCBS competitions in Europe with our WSMs. I took a class with Harry Soo and after that we won awards and a Grand Championship in the UK.” 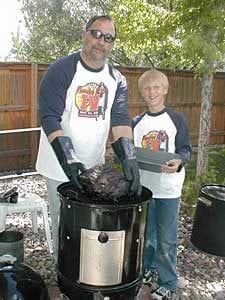 Here’s a photo of Chris Comer and son from Colorado, cooking pork butt on WSM Smoke Day IV, May 24, 2008. 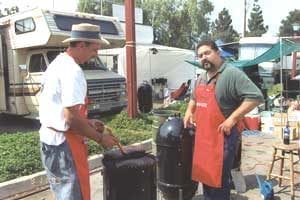 James Schofield and Moe Alvarez of West Coast BBQ & Catering in San Lorenzo, CA are shown here hard at work preparing ribs for turn-in at the Niles, CA “Swine & Wine” cook-off in September 1999. They cooked with two Bullets and a trailer BBQ rig.

All the effort paid off and they took first place overall in the competition. Congratulations guys! 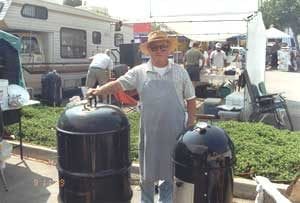 No, that’s not a Weber Bullet with a thyroid condition! This is Roland Cook, a one-man BBQ team hailing from San Leandro, CA, standing next to his standard issue Weber Bullet and a 55-gallon drum cooker sporting a Weber kettle lid. 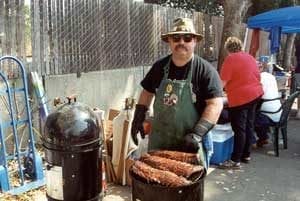 Frank Boyer has long been involved with the California Barbecue Association and organized the West Coast BBQ Championship in Santa Cruz, CA for many years.

If you’re wandering through Pleasant Hill, CA and happen to drive past the home of Mark Griffith, you’re likely to encounter the sweet smell of barbecue wafting from his backyard. “Ribs are my favorite,” says Mark, and he’s been cooking those bones on his WSM since September 2000. His favorite aspect of the Weber Bullet is what Mark calls “the cost/simplicity/great taste ratio”. Julian Riley is from Alvin, Texas, but “I just graduated from college and have started a full-time job at KIFI-TV Channel 8 in Idaho Falls, Idaho. I’m a lover of good food and family fun.”Your site has inspired me to spend every weekend perfecting my far-off dream of starting my own BBQ House…The Smokin’ Pan!

“The Bullet cooker is by far the best thing short of the big, mother-load pits. Thanks, and know that I check your site every day.” 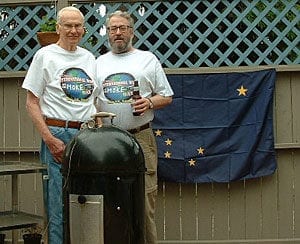