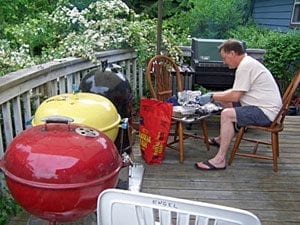 Here’s a photo of Jim Pfeff of Pewaukee, WI, on the 3rd Annual International WSM Smoke Day on May 26, 2007 with his WSM and collection of other Weber grills.

Jim says, “I raised the stakes for this year’s Smoke Day, deciding to make just about everything in my BBQ repertoire—78 pounds of beef, pork and chicken. This also meant finding people to eat it—neighbors, friends, coworkers and some strangers showed up.” 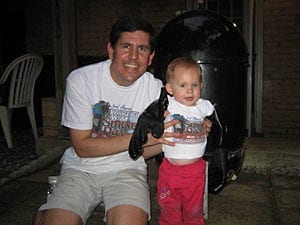 Rich Stone of Kensington, MD, is shown here with daughter Sarah and his WSM on the 3rd Annual International WSM Smoke Day on May 26, 2007.

Rich writes, “This was my 3rd International Smoke Day. Baby Back Ribs and Roadside Chicken were the main courses this year. Sarah just turned 1 and I had no idea how much she would love ribs at that age!” 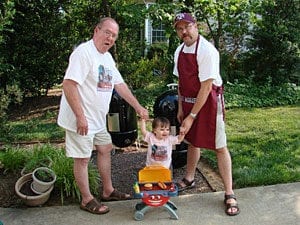 Paul Newton of Dayton, TX, is shown here with his two WSMs on the 3rd Annual International WSM Smoke Day on May 26, 2007. “Three generations of smokers—Gramps, Dad, and Allison,” says Paul. “Allison is only one year old and too little to use a Weber, but she had her ‘Charlie Coal’ grill. We spent all day smoking ribs and chicken.” 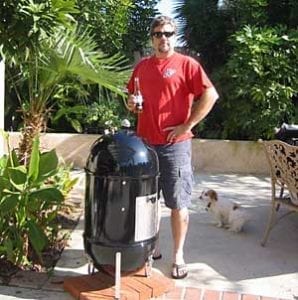 Toby Keil of Thousand Oaks, CA is shown here with a Corona and his brand-new WSM.

Toby says, “For my first smoke I did some baby backs and man were they good! When I fired up the WSM for the first time the temp jumped up to 300 but I simply closed the vents and it dropped down to a very steady 225. I re-adjusted the vents again and it held that way for the rest of the smoke.

“I simply love this smoker” 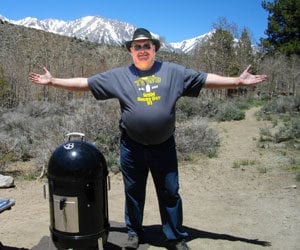 Bud Mathews hails from Escondido, CA and is shown here celebrating WSM Smoke Day VI in 2010. He was smoking ribs at the Four Jeffreys campground near Bishop, CA. Bud says he likes to “find peace in the high places and the open spaces.”

“Since this was a high-altitude campground (9300′) and it was relatively cool, my biggest problem was keeping my temps up. I was eventually propping the door open with a stick. But the ribs came out great!

“The thing I love about the smoker is once you’ve set it up, there is very little maintenance to keep your target temp.” 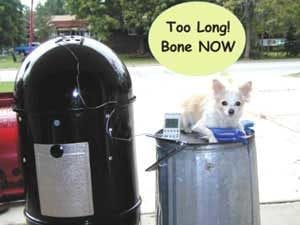 This is Tinker, an avid Weber Bullet fan, owned by Karl Shafer of Clarence, NY. As you can see from the thought bubble over Tinker’s head, it can be kind of “ruff” waiting for those delicious ribs to come off the cooker!

Sadly, Karl passed away in March 2001 at the age of 66. He was well known on The BBQ Forum for his sense of humor and his willingness to help others. 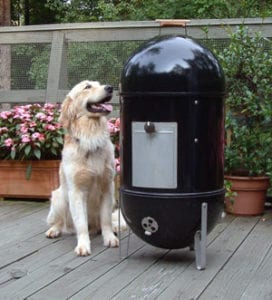 This is a photo of Weber, a one-year old Golden Retriever, submitted by Rita and Jack Yeazel of Atlanta, GA in late 2004. Weber will grow up to be a service dog for a handicapped person. He’s the fourth Golden Retriever that Rita and Jack have raised and cared for as part of the Canine Assistants program.

Writes Rita, “As you can see, Weber loves his WSM. Must be something good to eat in there—better than any DOG food!”