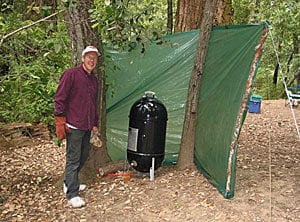 Robb Hesley hails from San Jose, CA and likes to take his WSM camping. Robb is shown here with the windbreak he fashion to keep the cooker temp up during a recent adventure at Big Basin Redwoods State Park.

Robb even provided his own caption for this photo: 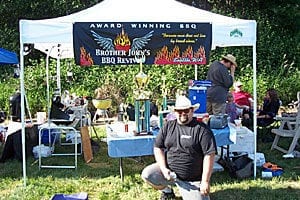 Here’s John Seuferling of Brother John’s BBQ Revival with his winnings at the Red Hook Regional Championship in Seattle. John credits his success to 3 beloved WSMs and his much-loved Homer Simpson Kettle. “They’ve been saved and sanctified by the sauce and smoke,” says Brother John. 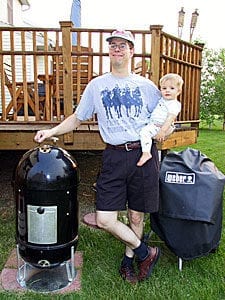 Michael Vrobel from Copley, OH sent in this picture of him and his baby. Oh, and his son, Ben, too. “Ben’s really in charge of the cooking,”, says Michael. No doubt! 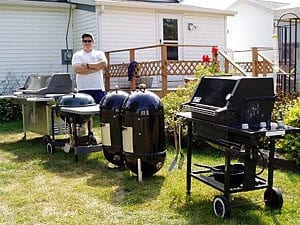 Tony Lee from Oxford, IN is shown here with his stable of Weber products, including two WSMs, two gas grills, and a charcoal kettle. 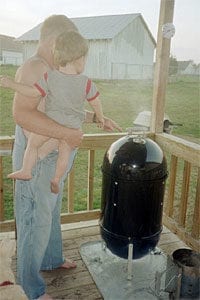 Charles Howse from Jackson, TN likes to barbecue with his grandson, J.D., shown here. “I’m determined that this boy will be q’ing by himself as soon as he is old enough to demonstrate that he can cook safely,” writes Charles. “The best things I like about my WSM are that it holds its temperature superbly, and it’s a breeze to use. I mostly cook pork butts, turkey and briskets on the WSM. I’m also beginning to dabble in making the ‘perfect’ sauce.” 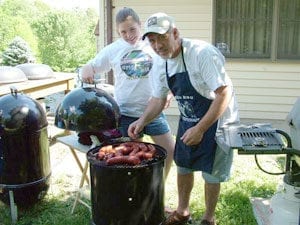 Here’s Rick Kramer and his daughter from Southern Illinois cooked pork butt, spare ribs, and sausage during the 1st Annual International WSM Smoke Day on May 28, 2005. “Best helper a guy could ask for!” says Rick about his daughter. “Hope everyone had as good a time as we did.” The man getting the smoke-facial in this photo is Dave Smith from McMurray, PA. As you can see, he’s a two-fisted WSM operator! Dave cooks just about everything on his WSMs…ribs, chuck roast, pulled pork, you name it…and he cooks it all in large quantities! 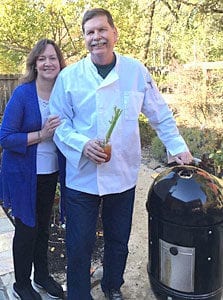 This is Don Cresswell from Castro Valley, CA and his wife Donna. Don writes, “Love my 18″ & 22″ Weber Bullets, and they’re part of my Weber grill family of 5. Cooking with live fire and only live fire for 40 years.” Way to go, Don!