TVWB Central Texas Barbecue Crawl: Where To Go, What To Eat, And Tips For Planning Your Own Trip 1/4

What Is A Barbecue Crawl?

A barbecue crawl is inspired by the bar crawl or pub crawl, in which people move from bar to bar, usually on foot, usually in a single night, to enjoy a drink at each establishment. Unlike a bar crawl, a barbecue crawl is usually spread out over several days, driving from one restaurant to the next, sampling barbecue as you go.

You probably know that the four most well-known regional styles of barbecue in the United States are the Carolinas, Kansas City, Memphis, and Texas. You may also know that Texas barbecue is not a single style. According to Daniel Vaughn, barbecue editor at Texas Monthly magazine and author of the excellent book The Prophets of Smoked Meat: A Journey Through Texas Barbecue, there are four main styles of Texas barbecue that represent the geographic and historical diversity of the state:

While each of these styles is worthy of its own barbecue crawl, a Central Texas crawl is at the top of most people’s list because the area has the highest concentration of great barbecue restaurants in the state, many in Austin and within a 50 mile radius of the city. This makes planning and executing a barbecue-oriented vacation easy, with the added bonus of other interesting attractions in Austin to round-out your trip, including a visit to the Texas State Capitol, the Lyndon B. Johnson Presidential Library, the hip Congress Avenue shopping and dining district, tons of outdoor activities, and over 250 live music venues.

Why so much good barbecue in Central Texas? The area has historically been cattle country, and the large influx of German immigrants to the area in the early 1900s brought with them the tradition of butchery and sausage making. They established small grocery stores and meat markets selling staple goods, produce and fresh meat and sausage, then smoked the leftover meat and sold it by the pound for lunch the next day. These markets faded away with the advent of modern supermarkets, but a few like Kreuz Market were able to transition into barbecue restaurants.

Today, Central Texas barbecue is growing stronger every day. It lives on in people like Wayne Mueller (Louie Mueller Barbecue), Nina Sells (Smitty’s Market) and Keith Schmidt (Kreuz Market) who are carrying on their multi-generation family businesses, and it finds new expression in relative newcomers like Aaron Franklin (Franklin Barbecue) and John Lewis (La Barbecue) who are blazing new barbecue trails inspired by the old traditions.

Here are some essential tips for planning the perfect Central Texas barbecue trip.

My wife and I planned our Central Texas barbecue crawl for October 14-18, 2015. We planned to fly from San Jose to Austin on a Wednesday afternoon, visit barbecue joints on Thursday-Friday-Saturday, and fly home early Sunday morning.

A visit to Franklin Barbecue was mandatory and would be the centerpiece of our trip. We also wanted to visit Smitty’s Market, Black’s Barbecue, and Kreuz Market (pronounced “Krites”) in Lockhart; City Market in Luling (pronounced “Lou-ling”); Snow’s BBQ in Lexington; and Louie Mueller Barbecue in Taylor.

I used the “My Maps” feature of Google Maps to drop pins for each restaurant and calculate the driving times and distances between each location. 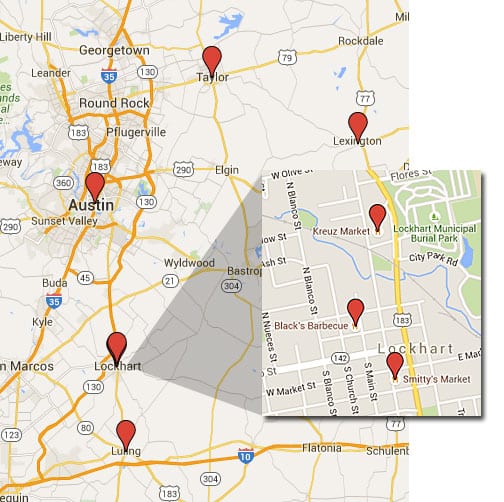 Since Franklin Barbecue was our top priority and we’d be waiting in line for hours to get in, we decided to visit there on Day 1 and make that our only barbecue stop of the day. On Day 2 we would drive south of Austin to visit the four joints in Lockhart and Luling. On Day 3 we would drive east to visit Snow’s BBQ (only open on Saturdays) then drive back to the northwest to swing by Louie Mueller’s.

We flew into Austin-Bergstrom International Airport, a nice, modern facility befitting the state capitol of Texas. One thing you will notice upon arrival is that The Salt Lick has a barbecue counter and a taco bar right there in the airport! I’m not sure how good airport barbecue is (I’ve not tried either one) but it made more sense to us to save our appetites for the crawl.

Our base of operations would be the Courtyard by Marriott on the busy I-35 corridor just south of downtown Austin. For dinner, we enjoyed the southern cooking and funky atmosphere at Threadgill’s on W. Riverside Dr. in downtown Austin, then tried to get some rest because we’d be up very early the next day to start our barbecue adventure!