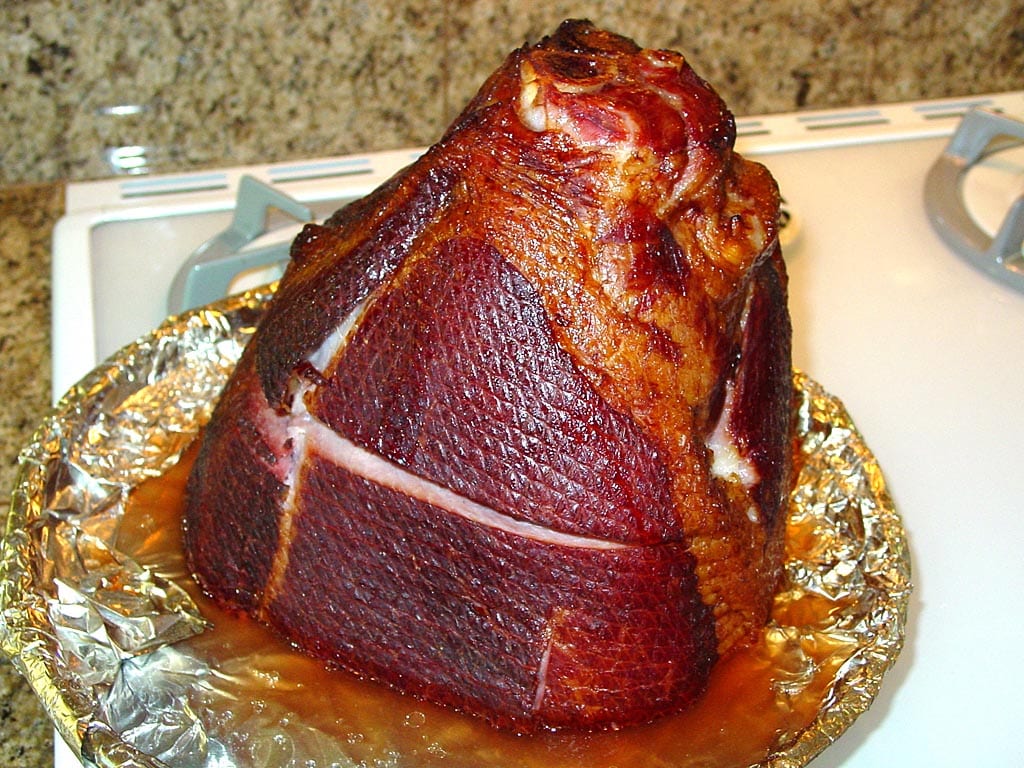 Spiral sliced hams are a popular choice not only during the holidays, but any time of year. These hams are convenient to serve because they’re pre-sliced and “ready to eat”, and their quality is usually quite good because most are a “ham with natural juices” product instead of the lesser quality “ham with water added” product.

Here are some pictures I took on June 4, 2006 when I prepared this ham. 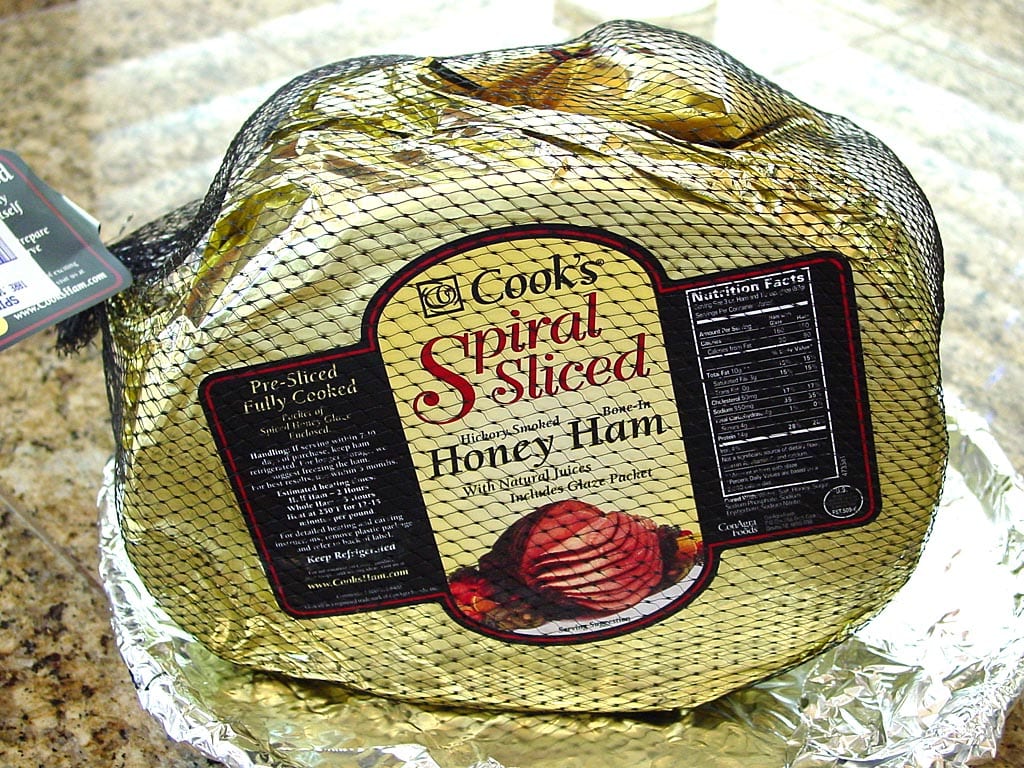 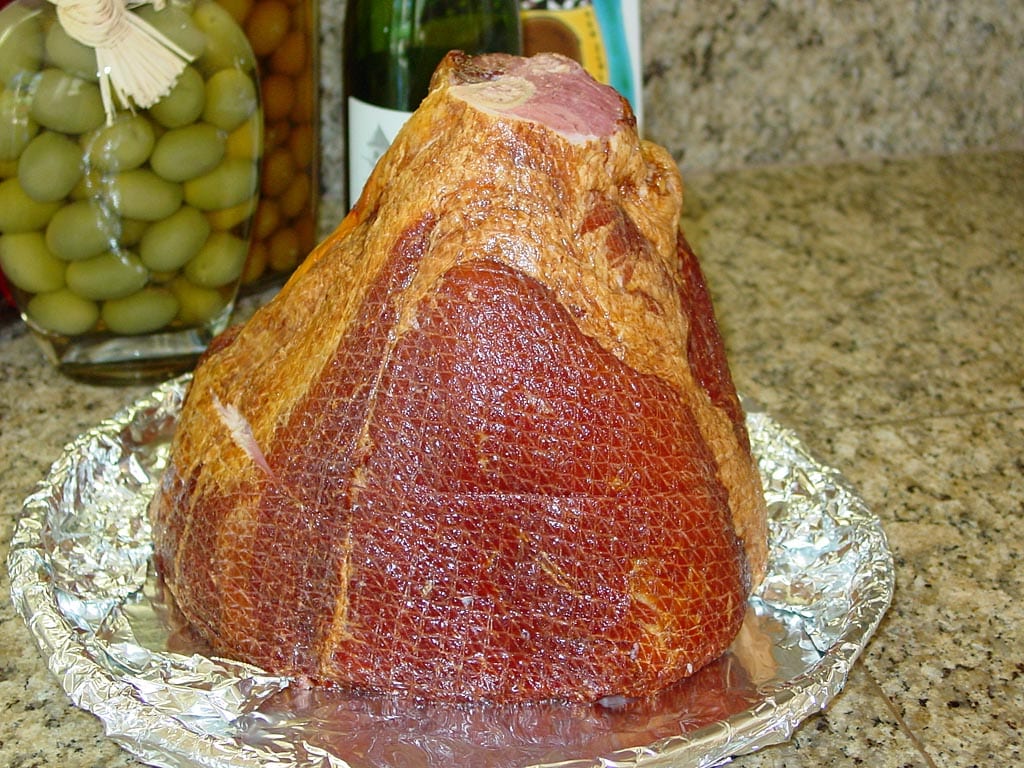 There’s absolutely no prep involved with a ham like this one, nor does it have to sit at room temperature before heating. Just remove the packaging and it’s ready to go into the WSM.

Place the ham face down on a foil-lined pan that will fit on the top cooking grate in the WSM. This prevents the slices from separating and even falling off the bone during heating.

To learn more about the various types of ham and ham terminology, visit the Ham Selection & Preparation page. 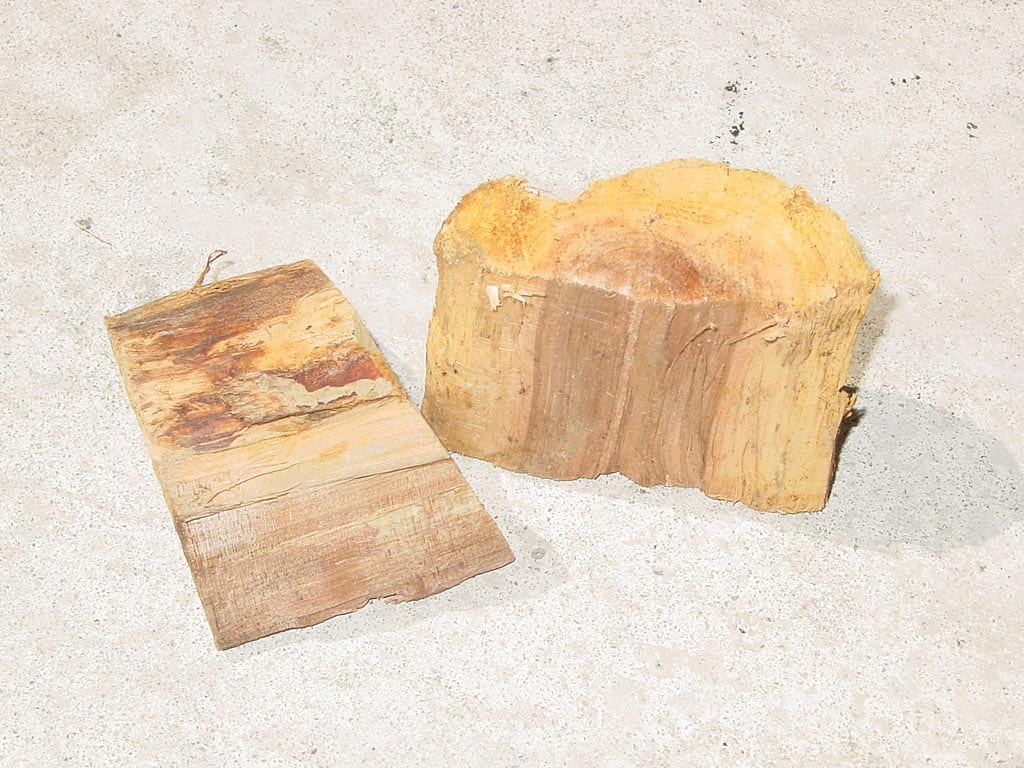 Fire-up the WSM using the Standard Method, using enough fuel to run the cooker at 225-250°F for 3-4 hours. About 1-1/2 Weber chimney starters of charcoal briquettes should be sufficient.

When the coals are well lit, assemble the cooker, add cold water to the water pan, and place a small amount of smoke wood on the fire. Remember, these hams already have smoke flavor added, so go extremely light on the smoke wood. Mild woods like cherry, apple, oak or combinations of these work nicely with ham.

I used two small chunks of dry apple wood, as shown above. 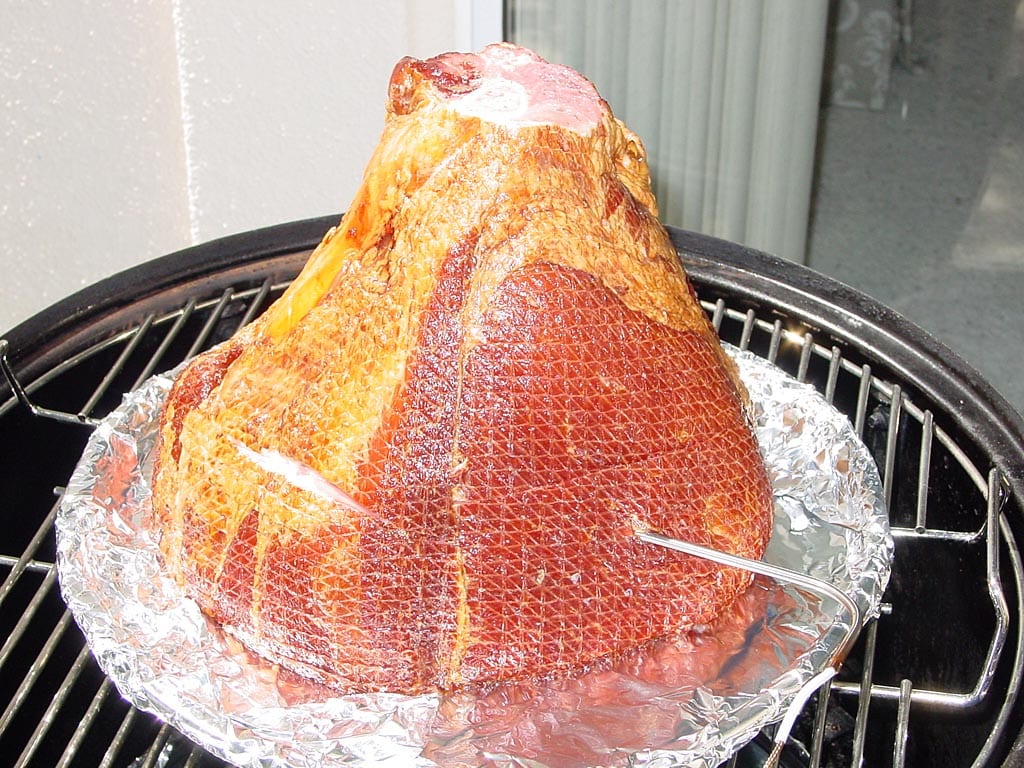 Place the ham on the top cooking grate.

Heat the ham at 225-250°F to an internal temperature of 120°F. There’s no cooking involved here…remember, a ready-to-eat ham is already fully cooked, so you’re just heating the ham to serving temperature. This may seem like a low finished temperature, but anything much higher risks drying out the edges of the ham slices.

There’s no need to turn the ham during heating, but you can baste it occasionally, if you like. Just for fun, I basted this ham at the start and again every hour with a 2:1 mixture of Martinelli’s Premium Apple Juice and Maker’s Mark Whisky.

Here’s how the cooker and meat temperatures went for this ham.

When the ham reaches an internal temperature of 120°F, it’s ready to serve. Tips for carving a spiral sliced ham can be found on the Ham Selection & Preparation page. 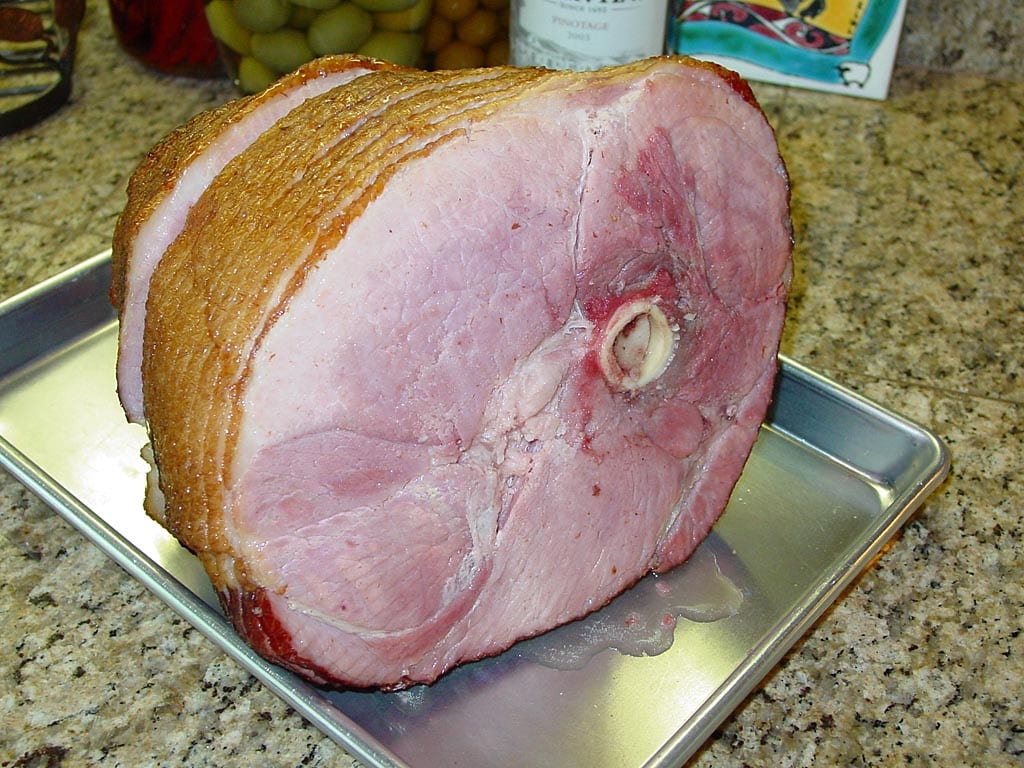 These photos show the finished ham and how I served it with barbecue seasoned potatoes, cut corn, and apple sauce. 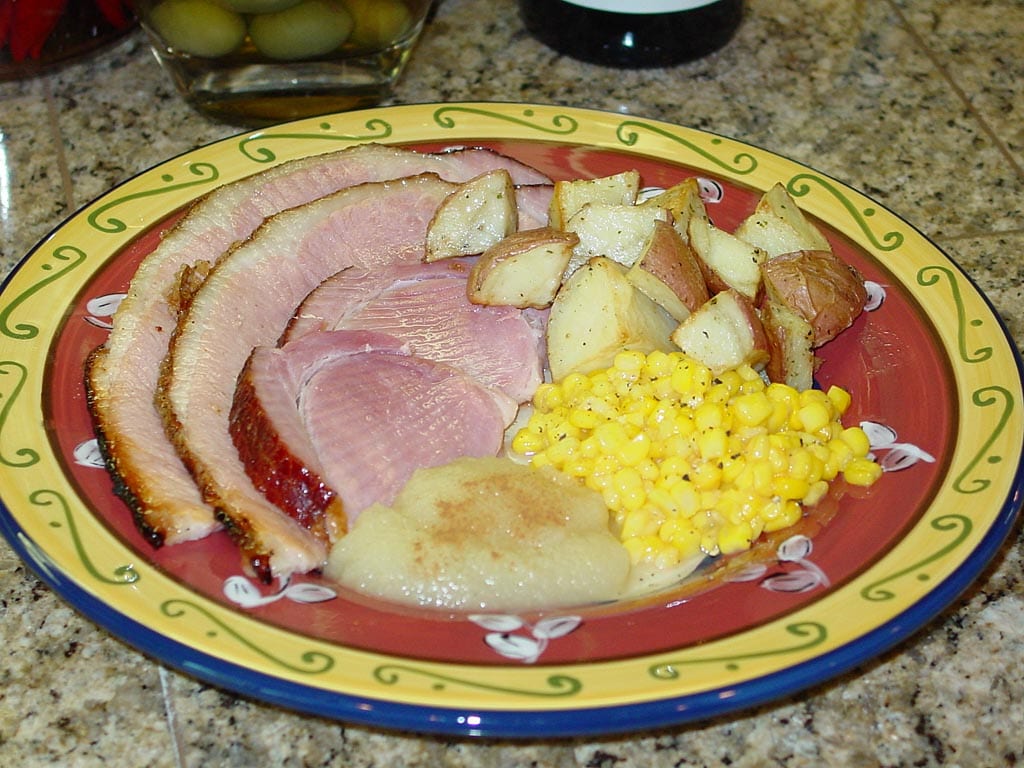 Make It Sweet, Turn Up The Heat

Looking for a sweet and spicy ham? In the book Dr. BBQ’s Big-Time Barbecue Road Trip!, Ray Lampe has a recipe for Smoked Ham Kansas City Style (p. 22) that follows a similar process to the one described above, but rubs the ham with a mixture of 1/4 cup brown sugar and 1 teaspoon cayenne pepper, then heats it to 160°F internal temperature using oak as the smoke wood.