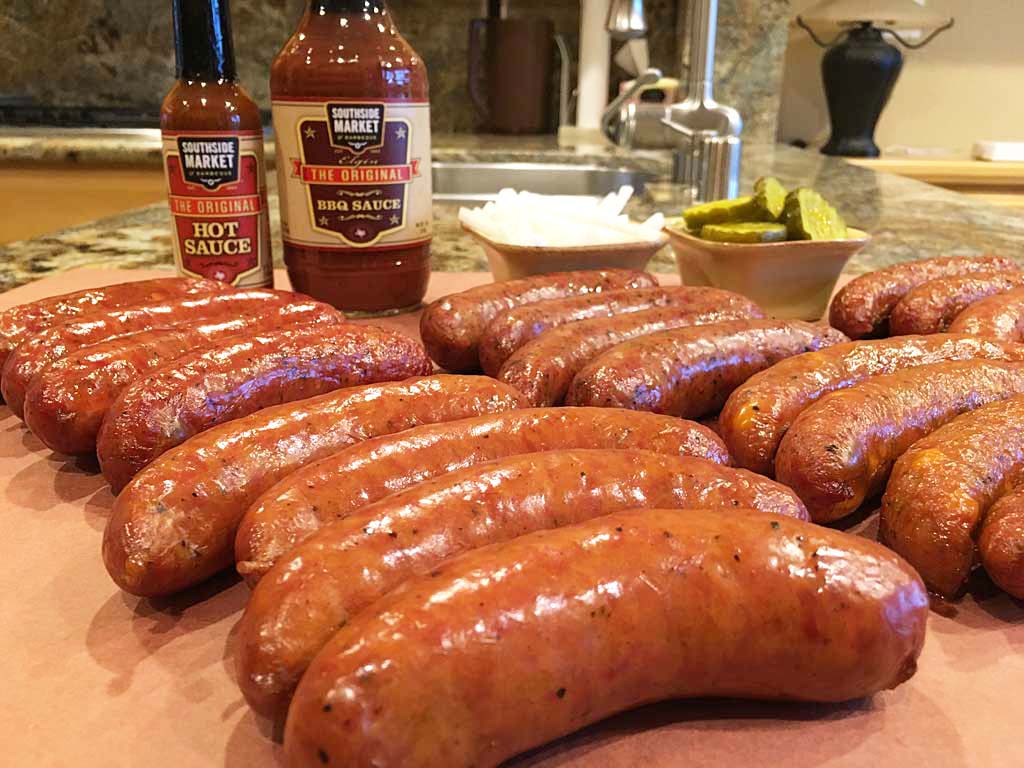 While sausage making was certainly happening in Central Texas prior to the arrival of German immigrants in the 1830s and 1840s, it was those immigrants with their heritage of butchery that put Texas-German style sausage on the map. It was made simply with coarsely ground beef, sometimes with ground pork added, salt, black pepper, maybe some cayenne for heat, maybe not, stuffed into a natural casing and smoked.

Today, you’ll find very good sausage at barbecue joints all over Central Texas, but the epicenter of sausage is in the town of Elgin. Proclaimed the Sausage Capital of Texas by the Texas legislature in 1995, Elgin is home to two world-famous sausage makers: Southside Market and Meyer’s Elgin Sausage. Both have deep roots in the community and traditions of sausage making dating back to the late 1800s.

Thanks to the magic of FedEx shipping, you can mail-order authentic Texas-German sausages from either joint and try them for yourself from the comfort of your own backyard.

Here are some photos I took on April 21, 2016 when I smoked these sausages on the Weber Smokey Mountain Cooker. 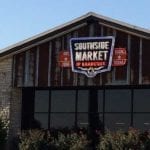 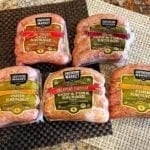 I traveled to Texas in October 2015 for the TVWB Central Texas Barbecue Crawl and passed through Elgin on the way to sample barbecue at Snow’s BBQ in nearby Lexington, but did not have time to stop at either Southside Market or Meyer’s Elgin Sausage. So when I wanted to try smoking Central Texas sausages at home, I decided to mail-order some from Southside Market. I ordered the Smoked Sausage Sampler which included 1 package each of Original, Polish, Garlic, Jalapeño, and Country Style sausages, plus a bottle of Southside’s barbecue sauce and hot sauce. These sausages were already smoked and fully cooked. Before you say, “Isn’t fresh sausage better?”, let me remind you that even the great Aaron Franklin has been known to smoke pre-cooked sausages and covers the topic in this video.

When it comes to smoking pre-cooked sausages, all you really need to do is heat the sausages through and apply a bit more smoke flavor using the Weber Smokey Mountain Cooker. The package instructions say to cook the sausages over indirect heat for 20 minutes on each side or until the sausages reach an internal temperature of 160°F.

However, in his video, Franklin provides some finer points on how to smoke a pre-cooked sausage:

If cooking sausages alone, fill a Weber chimney starter 1/2 to 3/4 full with Kingsford Charcoal Briquets and light. When the coals are hot, spread them evenly in the charcoal chamber. Place the water pan in the middle cooking section but leave it empty, and assemble the cooker. Open the top vent and the three bottom vents fully. Allow the cooker to come up to about 300°F before putting the sausages into the cooker.

When cooking sausages with other barbecue meats, put them in the smoker toward the end of the cooking session so all the meats are finished at the same time.

Smoked So Fast It Will Make Your Head Spin 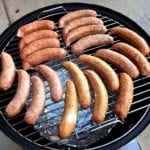 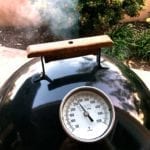 When the cooker temperature comes up to about 300°F, place the sausages on the top cooking grate and replace the lid. Place one medium-sized chunk of dry smoke wood on the hot coals. I used one chunk of apple wood, but oak would also be a good choice.

Cook the sausages for 30 minutes, adjusting the bottom vents to maintain 275°F. Based on Franklin’s advice, look for the casings to be crisped by the fat but not to the point that they pop and shrivel.

It’s not necessary to turn or baste the sausages during cooking.

If you want to check the internal temp of the sausages, they should register 160°F with an instant-read thermometer. 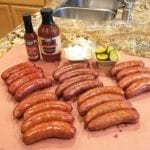 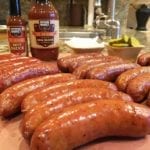 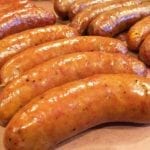 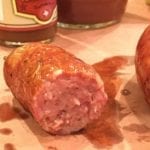 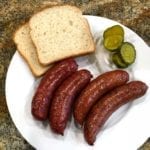 I noted in my cooking log that all the sausages were very juicy and flavorful, but the Original and Polish versions were our favorites.

Serve the sausages with white onion, pickles, and soft white bread or saltine crackers. To create what’s known as a sausage wrap in Texas, wrap a link of sausage in a slice of white bread with onions, pickles, maybe some barbecue sauce and/or mustard, and enjoy.