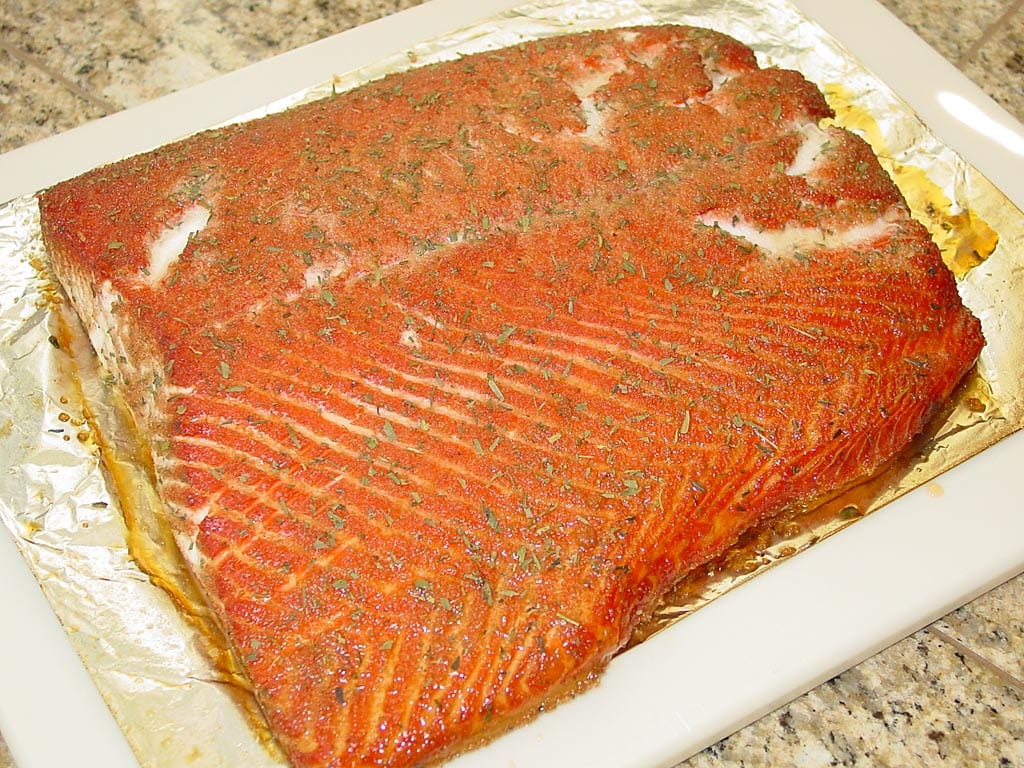 Jim Minion and Jack Rogers from Washington state used to compete as the Cardogs Barbecue Team. Over the years, they perfected this brown sugar rubbed salmon recipe. I first wrote about it here on TVWB in 2000, and it achieved even greater notoriety when it was featured in Sunset magazine in July 2002 and on the PBS series Barbecue America in 2003.

This is a moist salmon, the type served as a dinner entree, as opposed to the drier variety you might enjoy as an appetizer with crackers.

Here are some pictures I took on June 26, 2004 when I prepared a center-cut salmon fillet using this recipe. 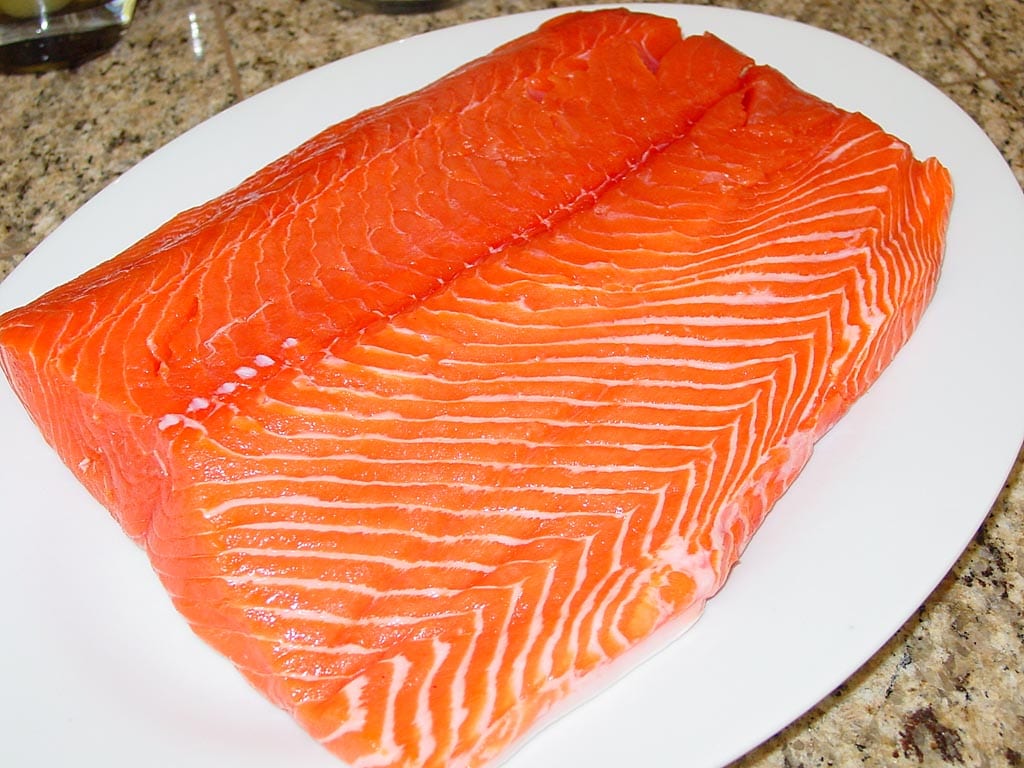 Choose a 3-4 pound King or Sockeye salmon fillet. Fresh, wild salmon will look and taste best. Have your fishmonger remove the scales and leave the skin intact.

Remove the pin bones using needle-nosed pliers. Pull toward the head-end of the fillet for best results.

I visited a high-end market and purchased the center-cut wild King salmon fillet shown here. It weighed 4.25 pounds. This fish was so fresh, it had been swimming off the coast of San Francisco earlier that same day.

Here’s the recipe for the brown sugar rub used on the salmon.

Place the salmon flesh-side up on a non-reactive platter or in a glass baking dish. Pour all of the rub over the salmon and spread it evenly over the surface, about 1/4″ thick. 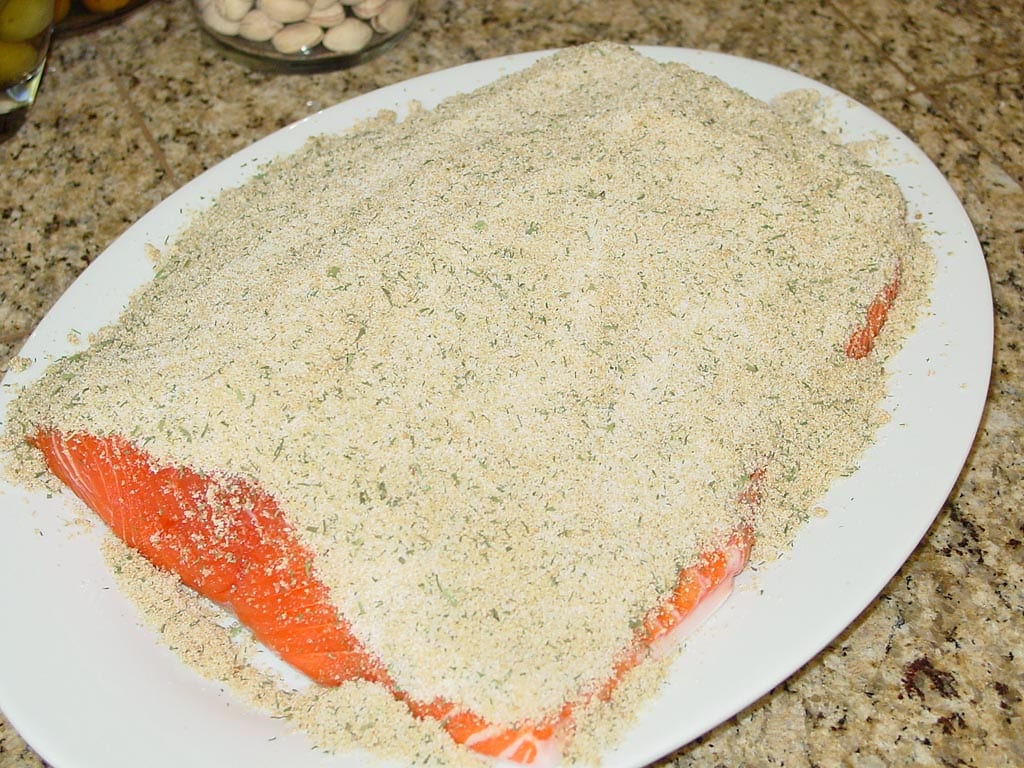 Move the salmon into the refrigerator for 2-3 hours. This fillet was refrigerated for three hours.

Next, rinse the fillet thoroughly under cold running water to remove all the salt and sugar. Pat all surfaces dry with paper towels. You’ll notice that the fillet now has a more intense color. 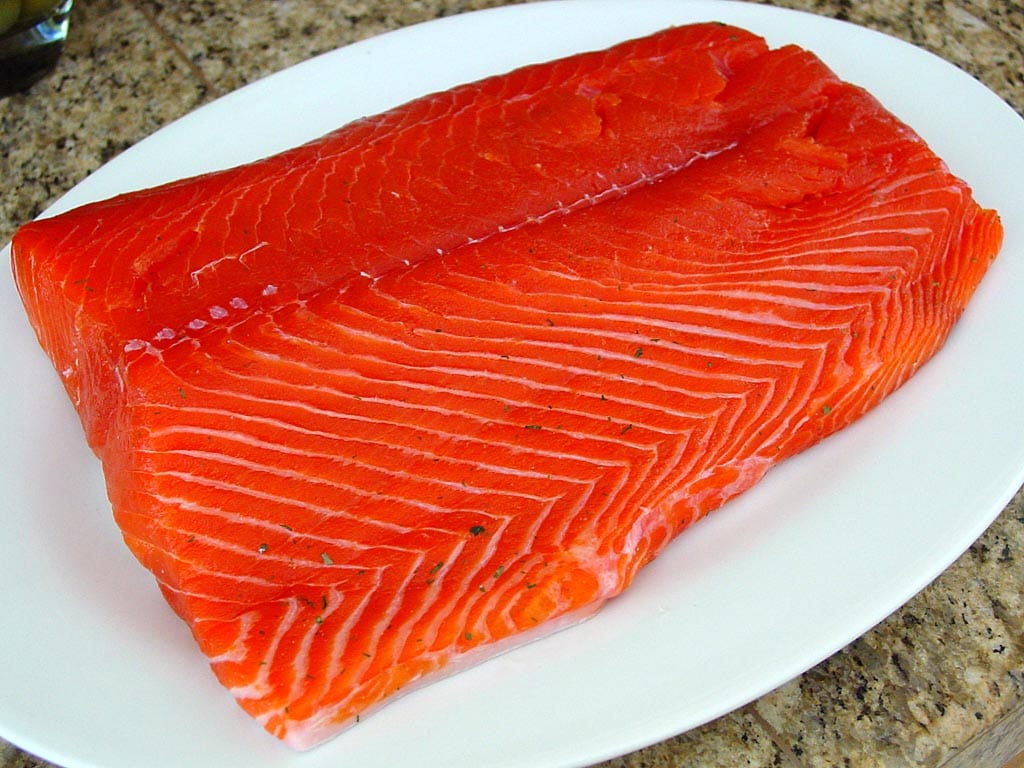 Place the fillet flesh-side up on a clean platter or rimmed baking sheet pan and let it dry until tacky, about 30 minutes. This tackiness is known as pellicle. It is the result of water-soluble proteins drawn to the surface of the fish by the rub that dry to create a sticky layer. This layer prevents moisture loss and attracts and holds smoke particles during cooking. 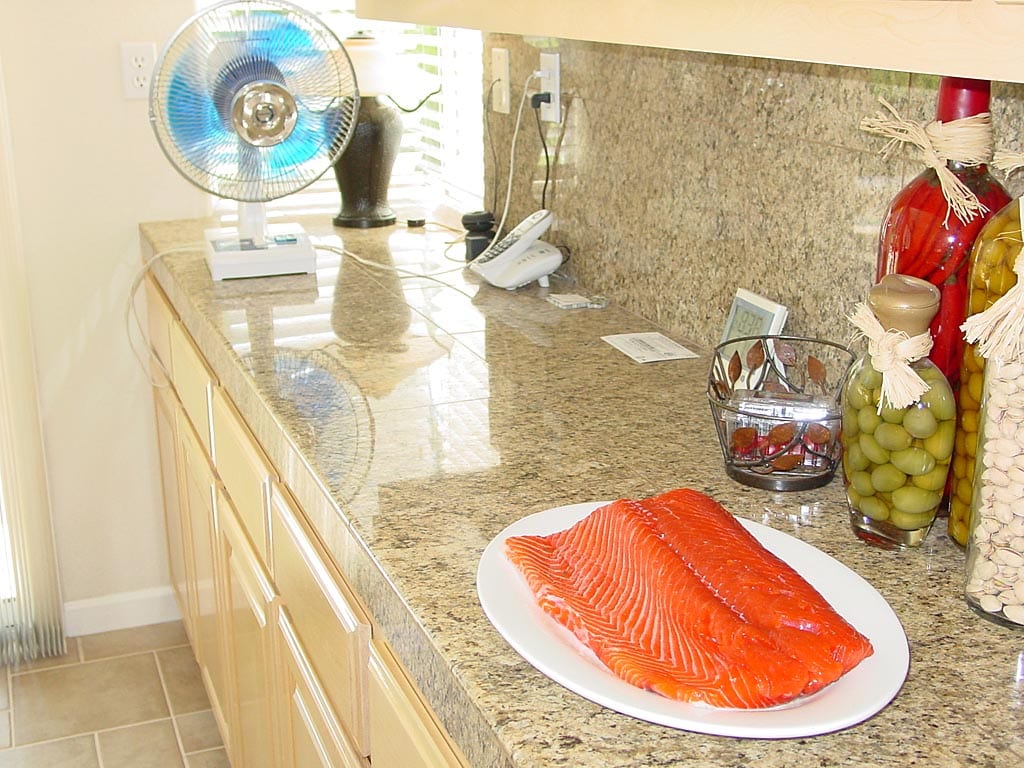 You can dry the fish in the refrigerator, or on the kitchen counter in front of an electric fan.

Here’s the recipe for the rub that’s applied to the salmon just before cooking.

Fold a piece of heavy duty aluminum foil in half to make a sling slightly larger than the salmon fillet. Spray the foil with non-stick cooking spray and place the salmon flesh-side up on the foil.

Sprinkle on the finishing rub on all surfaces except the skin side. 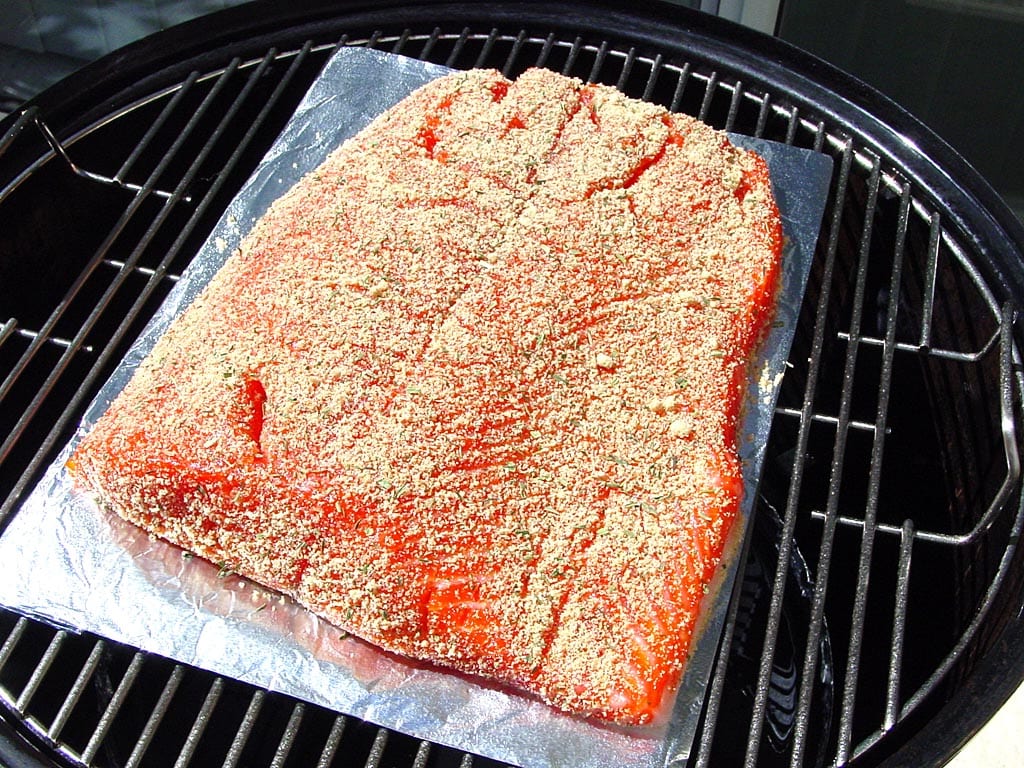 This rub is sweet, so adjust the amount used according to your taste. The Cardogs suggest applying twice the amount you would if you were applying heavy salt and pepper to meat. 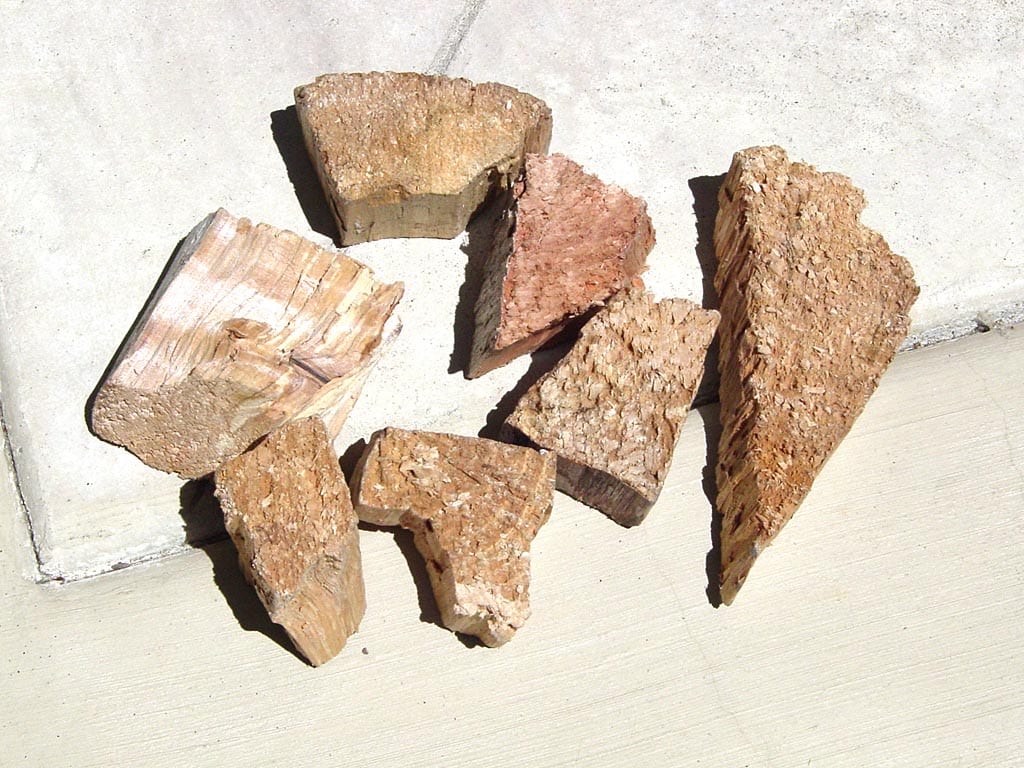 Choose a mild smoke wood like alder or other fruit wood. I used seven small- to medium-sized pieces of dry alder wood, as shown here.

Light one heaping Weber chimney starter full of Kingsford Charcoal Briquets. When the coals are hot, spread them evenly in the charcoal chamber.

Assemble the cooker. Place the water pan in the cooker and fill with cool tap water. Close the top and bottom vents, allowing the cooker to come down to about 325°F before proceeding—perhaps 10 minutes.

When the cooker drops to 325°F, open the top vent fully and leave it that way throughout the entire cooking session. Put the salmon sling on the top cooking grate. Add the smoke wood to the hot coals.

Leave the bottom vents closed until the cooker comes down to about 225°F, then adjust a single bottom vent to maintain 225-250°F.

There is no need to turn or baste the salmon during cooking.

Remove the fillet from the cooker when it is about 5°F below your desired final internal temperature. Cover loosely with aluminum foil and let rest for 5-10 minutes to allow the residual heat to finish cooking the salmon.

These photos show the finished product. The surface had a nice smoke color, and the seasoning made for a very appetizing appearance.

Inside the salmon was very moist when I cut into it, firm in the middle and a bit drier and flakier toward the thin edge on one side. 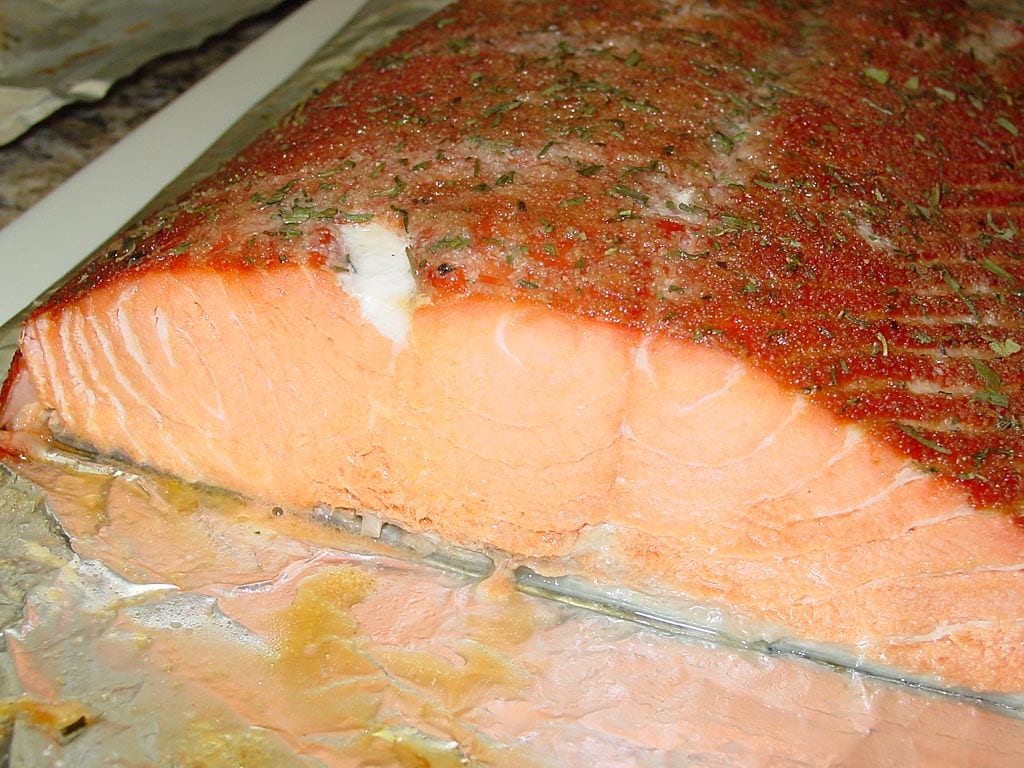 In terms of taste, it had a well-balanced flavor of salmon, smoke, and seasoning. It was not too smoky, nor was it too salty. In fact, it was just a bit sweet from the finishing rub.

One last tip: Use an electric carving knife for neat slices.

The white gooey substance that forms on the surface of cooked salmon is called albumin. It consists of proteins that are squeezed out of the flesh during cooking and coagulate on the surface. Cook’s Illustrated magazine did some testing on this subject and found that albumin forms on salmon to some extent no matter how you cook it, although overcooking causes the most albumin formation.

So the unsightly white curd is actually a sign that the meat is very moist and has been cooked “low and slow” with great care.

To greatly reduce the formation of albumin, Cook’s suggests brining salmon for 10 minutes in a solution of 1 Tablespoon of salt per cup of cold water. “The salt partially dissolves the muscle fibers near the surface of the flesh, so that when cooked they congeal without contracting and squeezing out albumin,” says Cook’s.

Jim Minion was kind enough to share the “Official Cardogs BBQ Salmon” recipe with TVWB, and I’ve posted it below in its entirety.

Mix all ingredients thoroughly. Turbinado sugar may be substituted for brown sugar.

Buy a fresh, 3-pound salmon fillet, preferably Sockeye or King. Remove the pin bones using tweezers or needle-nosed pliers. Do not remove the skin. Place skin-side down in a glass or stainless steel pan.

Pack the dry rub on the flesh side of the fillet, approximately 1/4″ thick. Let the fillet rest in the refrigerator for 2 to 3 hours (the longer you leave the rub on, the stronger the salt flavor). Rinse the fillet in cool, clean water to remove the dry rub, then pat dry. Allow to dry for about 30 minutes, until the flesh becomes tacky.

Heat a barbecue grill to medium to medium-high. Sprinkle finishing rub on the fillet (twice what you would use as if you were heavy salt and peppering). Cook with the lid closed to an internal temp of 140-155°F (your preference) measured in the center of the thickest part of the fillet.

We recommend using wood to produce smoke while cooking. On a charcoal grill, just sprinkle a few wood chips on the coals. On a gas grill, place wood chips in a pouch made of aluminum foil. Poke holes in the top of the pouch and place it on the hottest spot under the grill. Alder is our wood of choice, but fruitwoods are a wonderful substitute.

You can also smoke it at lower temps of 225-250°F; this allows for more smoke on the fillets.