Here are some pictures I took on June 2, 2001 when I prepared an appetizer-style salmon using a brown sugar brine and alder as my smoke wood.

I was fortunate to find ocean-caught King salmon that had just come in off the boat in Half Moon Bay, California. Believe me, the camera does not do justice to the vibrant color of ocean-caught Pacific salmon! 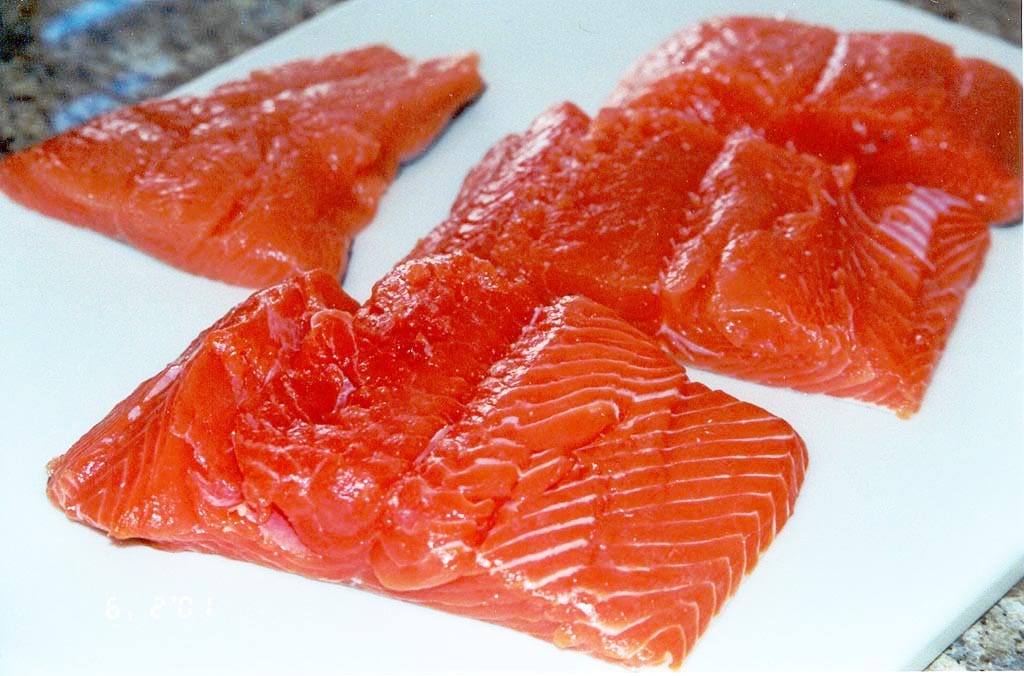 I bought two pieces of fillet weighing a total of 2.21 pounds with the skin on. I removed the pin bones from the fillets before brining. They came out fairly easy, and I stopped when the bones got so small that I could no longer grab them with the needle-nosed pliers. 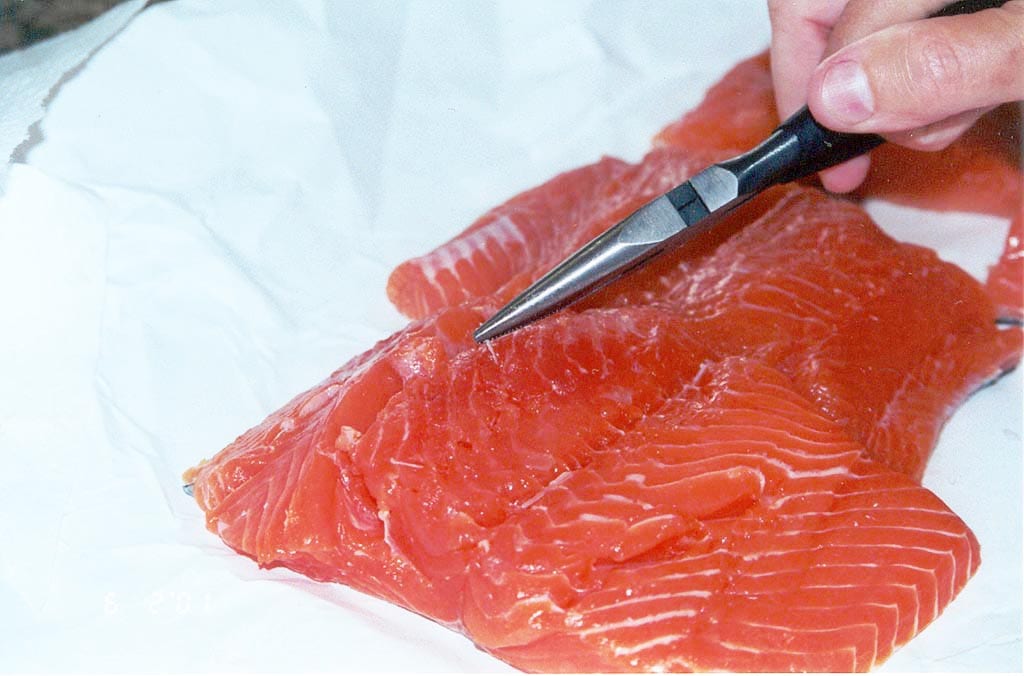 I cut each fillet in half, resulting in four pieces about 3″ wide.

Here’s the recipe I used for the salmon brine.

Combine all ingredients, stir until dissolved.

I combined the brine ingredients in a large Pyrex mixing bowl and stirred until the salt and sugar were dissolved. I placed the four pieces of fillet in the brine and used a dinner plate to keep the pieces submerged. 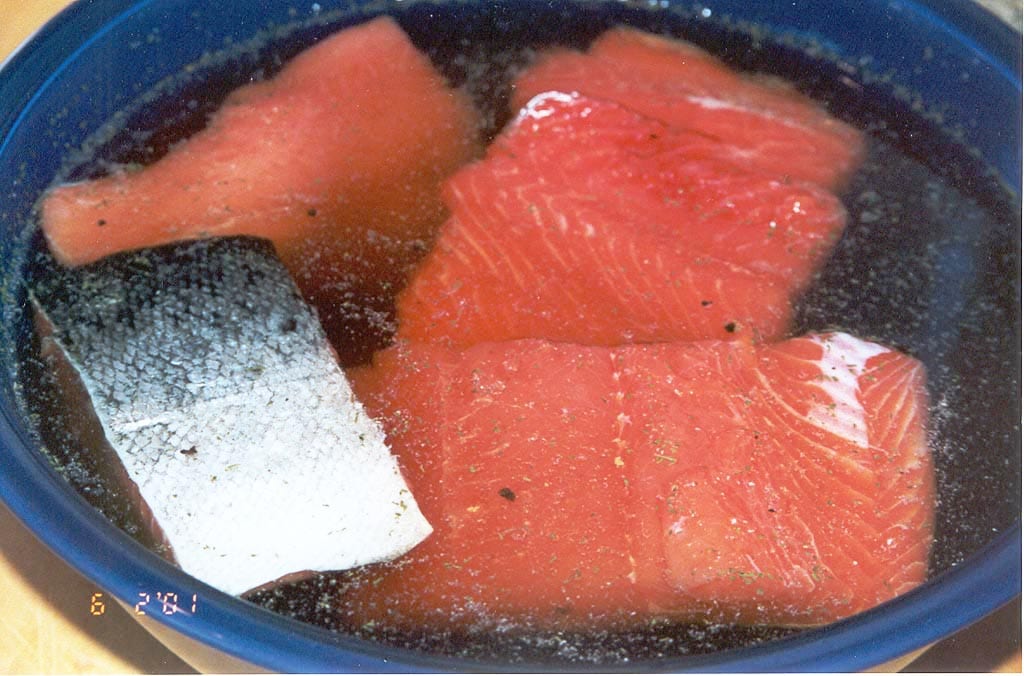 The fillets brined in the refrigerator for 75 minutes. A range of 60-90 minutes is appropriate. You can learn more about brining and the science behind it on the All About Brining page.

Rinsing And Drying The Fillets

After 75 minutes, I removed the fillets from the brine mixture, rinsed them thoroughly under cold tap water, and patted them dry with paper towels.

I sprayed the cooking grate with non-stick spray and arranged the pieces skin-side down. I sprinkled a little freshly cracked black pepper on each piece, then let them air-dry at room temperature for 1 hour until the flesh was tacky to the touch. 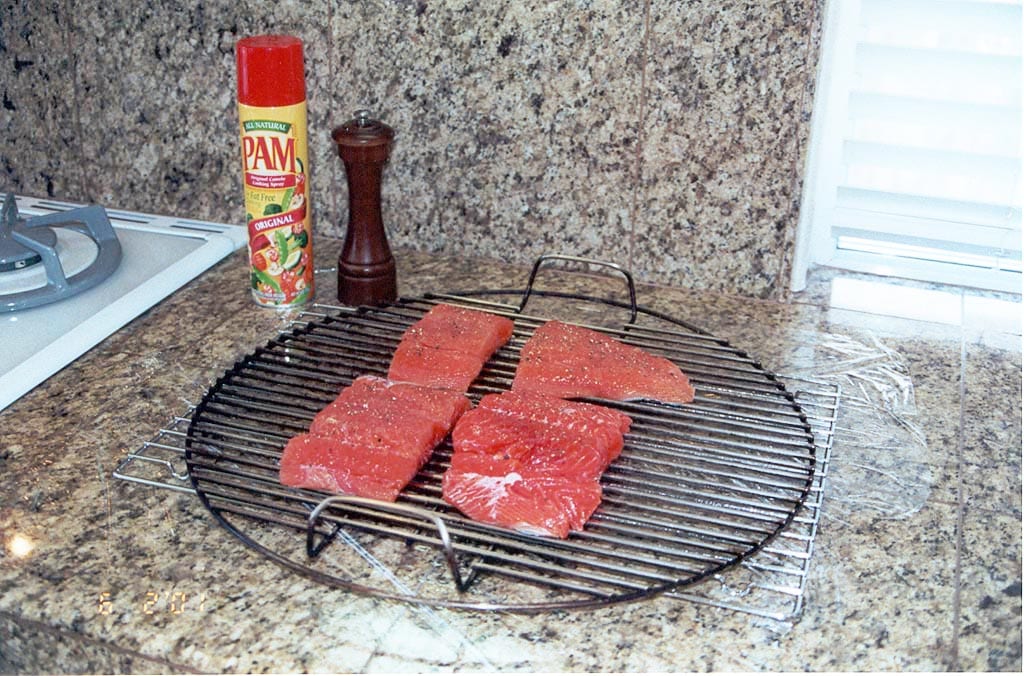 This tackiness is known as pellicle. It is the result of water-soluble proteins drawn to the surface of the meat by the rub that dry to create a stick layer that prevents moisture loss and attracts and holds smoke particles during smoking.

If you’re in a hurry and want to speed pellicle formation, just place the fish in front of an electric fan.

Just before putting the salmon in the cooker, I sprinkled each piece with a little bit of kosher salt, dark brown sugar, dill weed, granulated garlic powder, and onion powder.

At 11:35am, while waiting for the salmon to dry, I fired up a full Weber chimney starter of Kingsford Charcoal Briquets. Within 25 minutes the coals were hot and I dumped them into the charcoal chamber. I did not add any additional briquettes.

I assembled the cooker and put the empty, foil-lined water pan in place. I closed all the bottom vents and left the lid vent wide open.

Remember that when cooking a small quantity of meat for a short period of time with no water in the pan, you shouldn’t use too much fuel, or you’ll have a hard time getting the cooker down to your target temp.

Fillets Going Into The Cooker 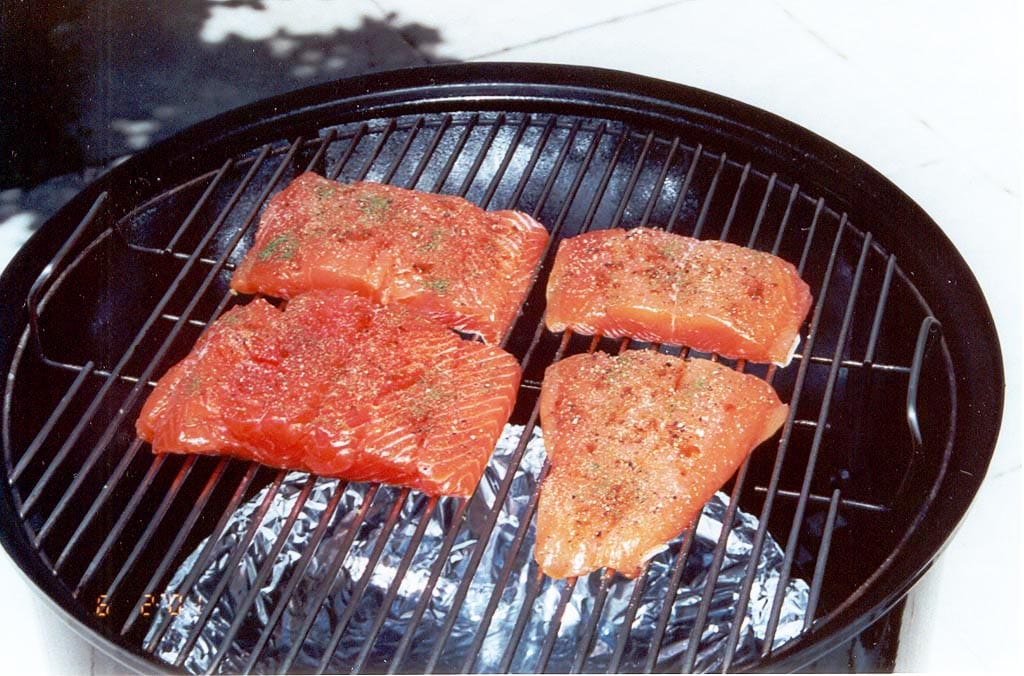 At 12:30pm, the fish went into the cooker. The lid thermometer said the temperature was 300°F. With the fish on, I added three large chunks and several small pieces of unsoaked alder smoke wood to the coals.

Since I wanted a drier, appetizer-style salmon, I planned to cook the fillets at 240-250°F for 3 hours, or until they looked dry enough.

The cooker dropped to around 240°F within 30 minutes, and the bottom vents stayed closed for 75 minutes into the cook. I did not turn or baste the fillets during what turned out to be a 3 hour cook.

When the temperature began to drop at 3:15pm, I opened the bottom vents more and stirred the coals to reinvigorate the fire.

After three hours, I opened the cooker for the first time and checked the fish. All the pieces looked dry enough, and I cutting into one just to make sure. It looked good, so I removed all four pieces from the cooker. 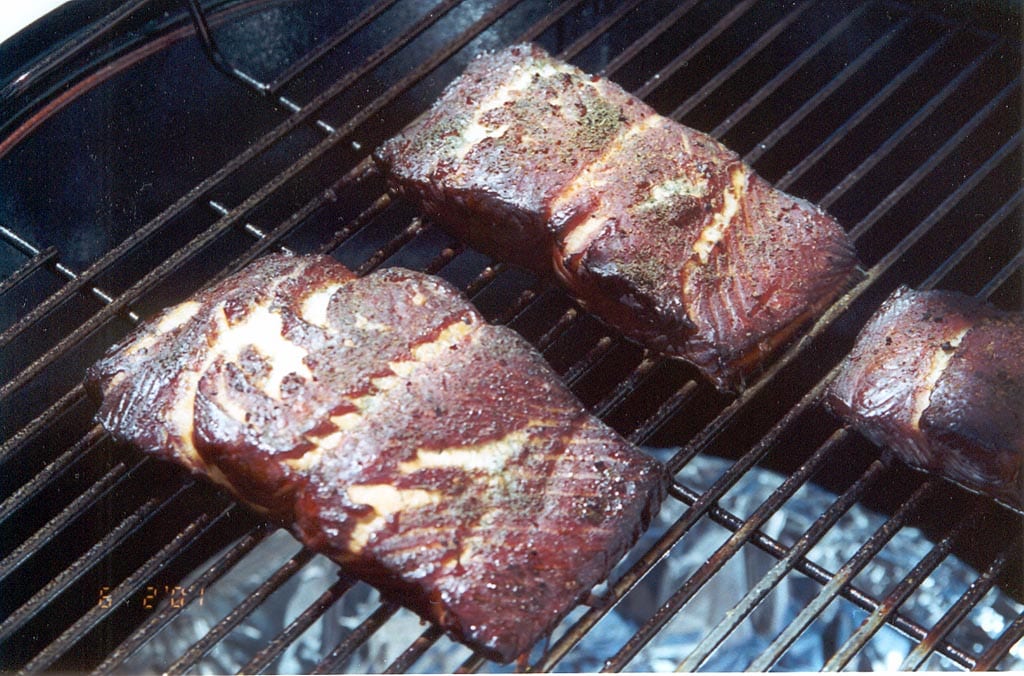 Each piece had a dark mahogany color and looked dry on the surface. Inside the thickest parts, the salmon was moist and flaky, not too dry but not too wet. The brine could be tasted throughout the salmon, and the meat had a mild smoke flavor and aroma. The skin came cleanly off the flesh.

Some of the thin edges were a little dry, but were still quite tasty. Some might think these bits were the best part, with a more concentrated, smoky flavor. 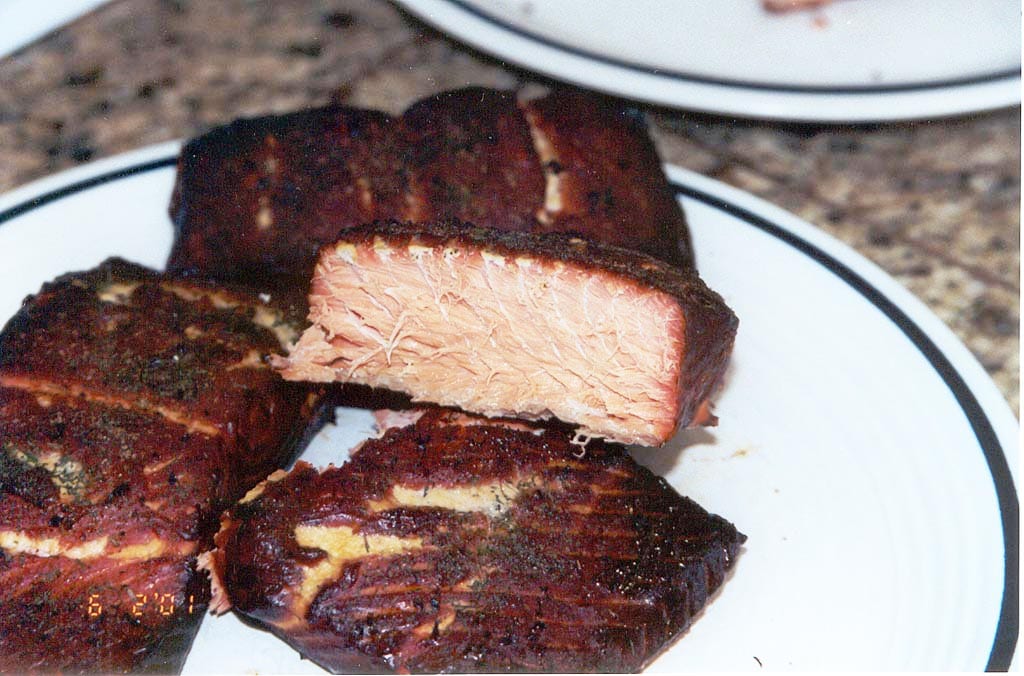 All in all, this salmon turned out to be a winner. The only improvement I will make next time has to do with the final seasoning I put on the fish—I didn’t apply it evenly enough. There was a nice amount in the middle of each piece, but not enough toward the outside edges.

If you like salmon, I hope you’ll give this one a try. Enjoy!

The white gooey substance that forms on the surface of cooked salmon is called albumin. It consists of proteins that are squeezed out of the flesh during cooking and coagulate on the surface. Cook’s Illustrated magazine did some testing on this subject and found that albumin forms on salmon to some extent no matter how you cook it, although overcooking causes the most albumin formation.

So the unsightly white curd is actually a sign that the meat is very moist and has been cooked “low and slow” with great care.

To greatly reduce the formation of albumin, Cook’s suggests brining salmon for 10 minutes in a solution of 1 Tablespoon of salt per cup of cold water. “The salt partially dissolves the muscle fibers near the surface of the flesh, so that when cooked they congeal without contracting and squeezing out albumin,” says Cook’s.