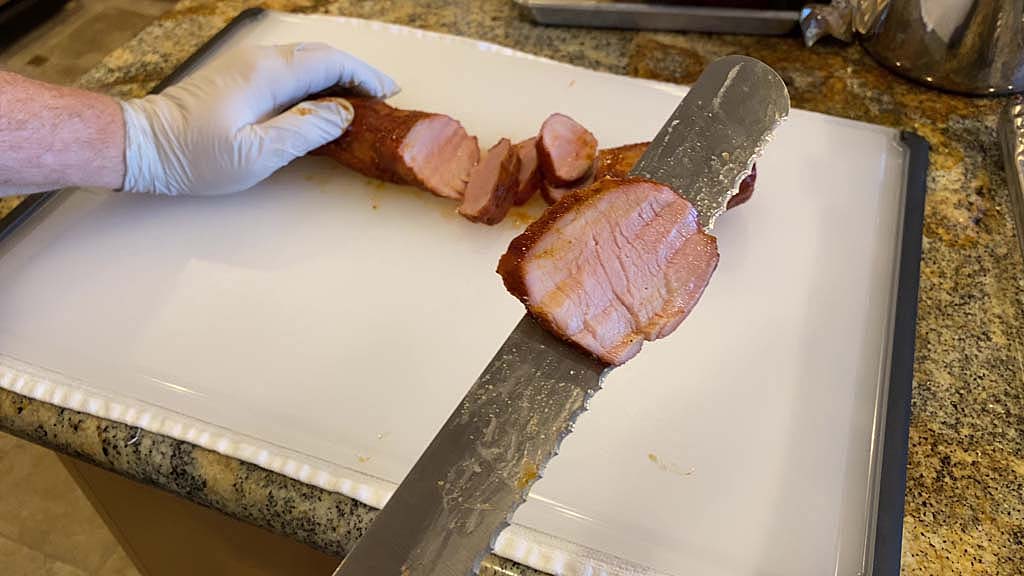 But until recently, I had never tried smoking pork tenderloin in the Weber Smokey Mountain Cooker. There were a few challenges in doing so, but the pork tenderloin turned out fantastic!

Here are some pictures I took when I smoked pork tenderloin using the Weber Bullet on May 11, 2021.

This video walks you through the process described in this article.

If you’re going to the trouble of firing up your Weber Smokey Mountain Cooker, I would suggest that you smoke at least two pork tenderloins, and better yet four pork tenderloins.

A good-sized tenderloin weighs 1 to 1.25 pounds, maybe 1.5 pounds tops. My wife and I can put away a whole pork tenderloin in a single sitting; a second one is enjoyed as leftovers. If you’re cooking for a group, you’ll want to plan on 1/3 to 1/2 pound of tenderloin per person.

You can purchase a single pork tenderloin at a butcher shop or from the meat counter at better markets. If you have this option, you can see the meat without any packaging and you can select a tenderloin based on weight.

Ideally, you’d like to have tenderloins that are all the same size and weight so each piece cooks at the same rate, but that’s unlikely, so plan on checking the internal temp of each piece with an instant-read thermometer and pulling pieces as they hit your target internal temperature. 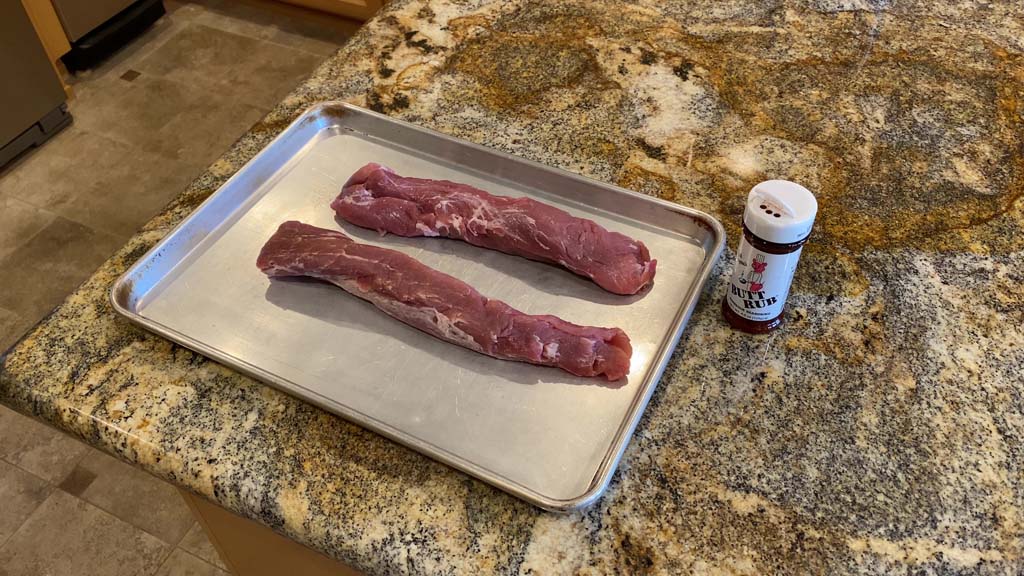 There’s not much prep to do on a pork tenderloin except to trim the silverskin and to remove any large areas of surface fat.

Silverskin is a tough connective tissue that runs down the surface of one side of the pork tenderloin, starting at one end and ending toward the middle of the tenderloin. Silverskin is a lot like the membrane on the back of pork ribs; it doesn’t break down during cooking so I like to remove it before cooking. It’s not the end of the world if you don’t remove it, but I think pork tenderloin eats better when you do.

This short video demonstrates how I trim silverskin from pork tenderloin. 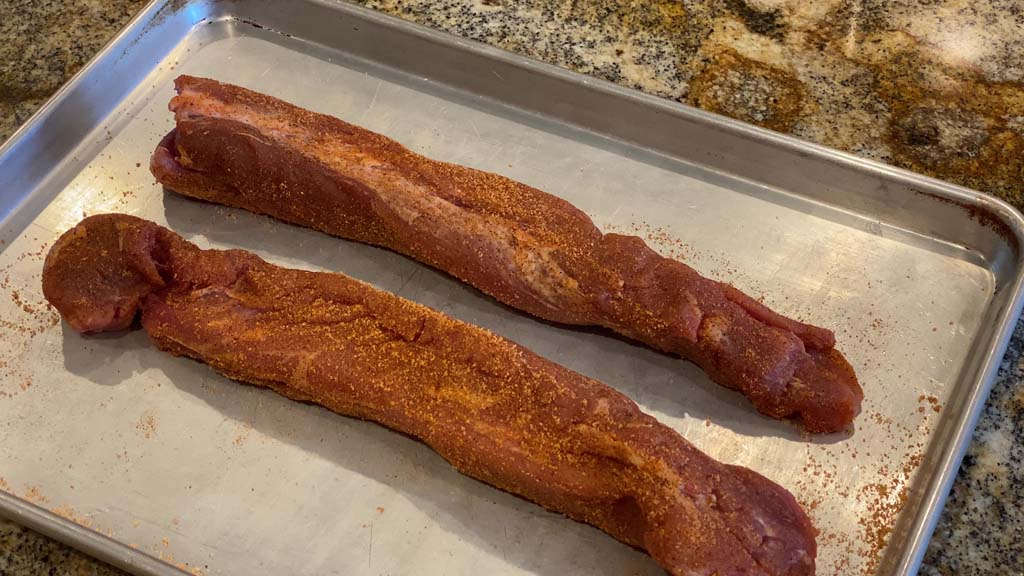 Apply a good amount of your favorite barbecue rub to all surfaces of the pork tenderloin. I used Bad Byron’s Butt Rub not because it’s my favorite (although it is a good rub) but because I had an open shaker of it in the pantry. This rub contains chipotle powder that gave my pork tenderloins some nice heat.

Return the rubbed meat to the refrigerator for 1 hour before placing it in the cooker. This gives the salt in the rub a chance to penetrate and flavor the pork.

Combine all ingredients in a medium saucepan over medium heat. Bring to a simmer, reduce heat to low and cook for 15 minutes, stirring occasionally. Remove from heat, cover with lid, and let sit until ready to brush onto pork tenderloin. 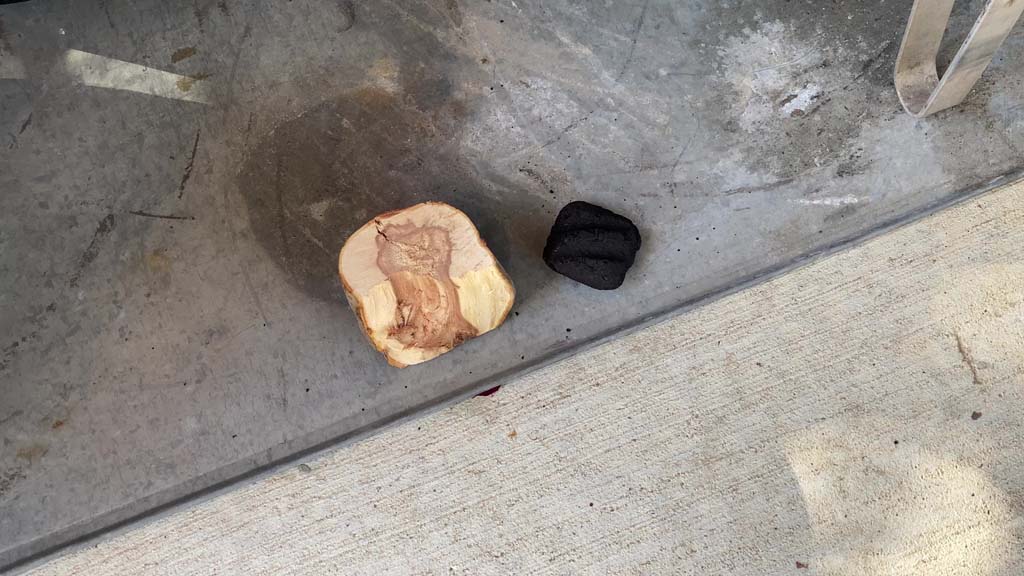 Select a mild smoke wood that compliments pork. I chose a single fist-sized chunk of apple smoke wood. There’s no need to remove the bark or soak the wood in water before use. 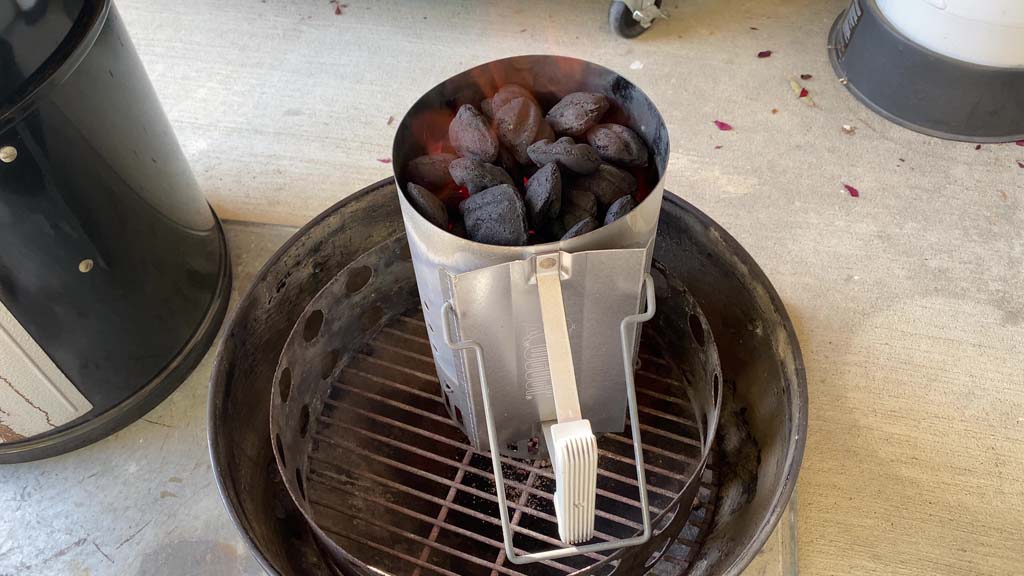 Light one full Weber chimney starter of Kingsford Charcoal Briquets. When the coals are hot, spread them out in the charcoal chamber and assemble the cooker.

Place your smoke wood chunk on top of the hot coals.

Do not put the water pan in the cooker. You’ll be cooking the tenderloins on the top cooking grate directly above the hot coals.

Open the top and bottom vents fully and leave them that way throughout the cooking process. 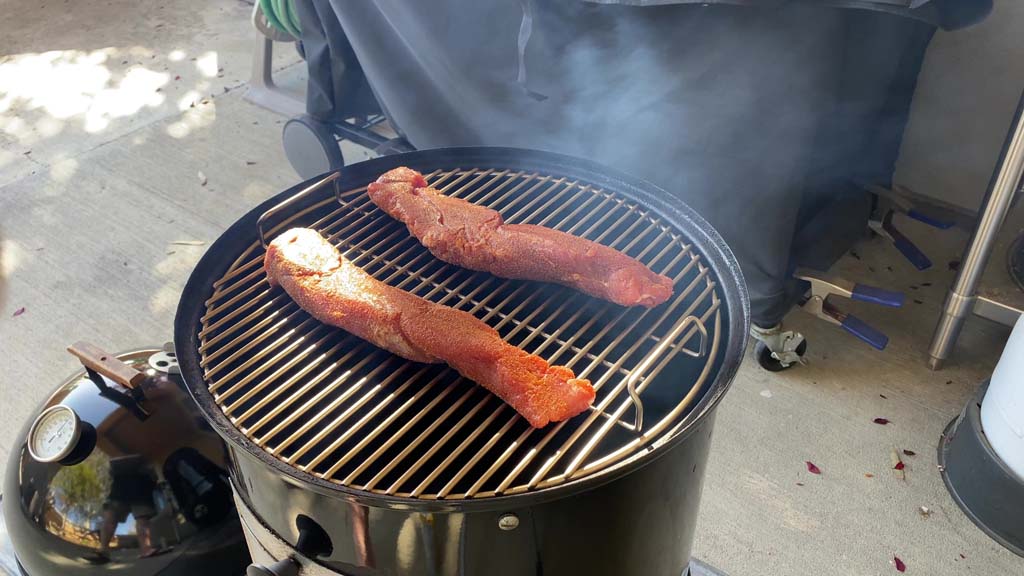 The cooker should be running between 300-350°F. Retrieve the rubbed pork tenderloin from the refrigerator. Spray the top surface of each tenderloin with non-stick cooking spray so it won’t stick to the grate. Place each tenderloin on the top cooking grate, sprayed side down. 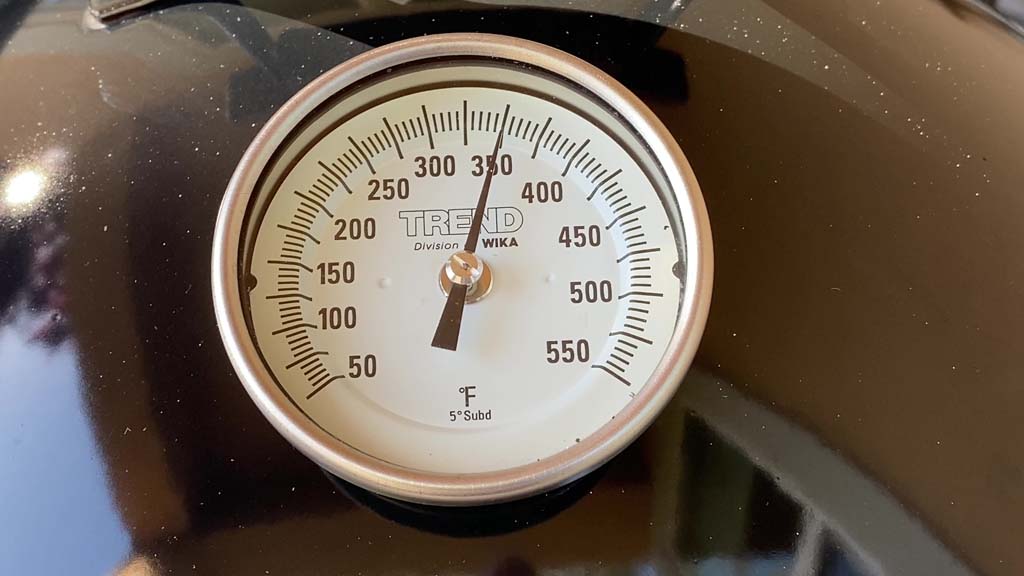 Pork tenderloin cooks quickly. On a gas or charcoal grill, it’s often cooked to an internal temperature of 135-140°F in 15-20 minutes, depending on the thickness of the meat. In the WSM, given the increased distance between the top grate and the fire, the cooking time is increased somewhat, but it’s still a very short cook and I was still shooting for a finished temp of 140°F.

I cooked these two tenderloins for about 18 minutes. At this point, they registered 128°F internal temp but didn’t have the exterior color and searing you’d get on a gas or charcoal grill. I sprayed the top surface with non-stick cooking spray, flipped the tenderloins, and applied a thin coat of barbecue sauce. 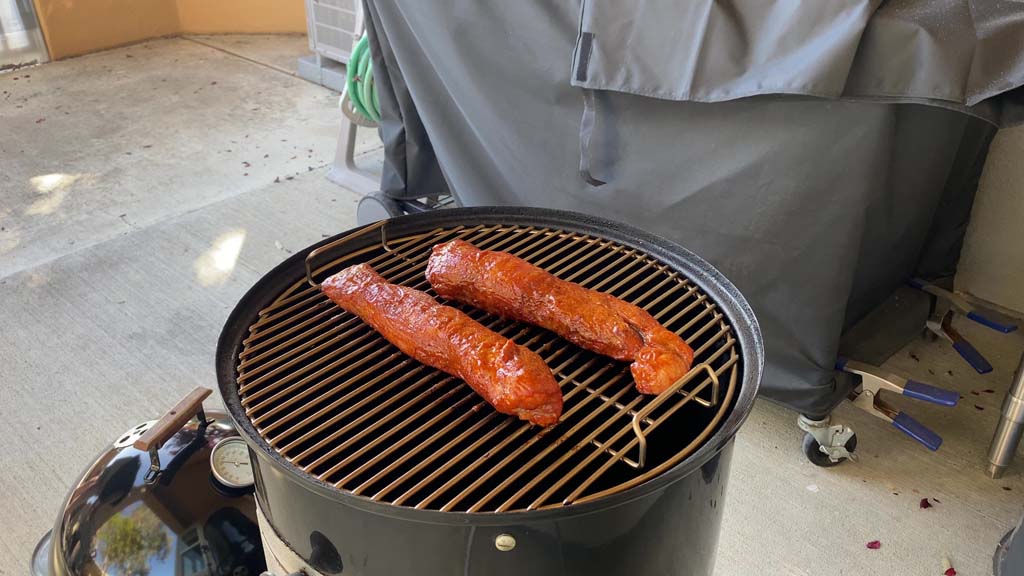 I cooked the two tenderloins for another 10 minutes and they were at 148°F! Ten minutes was too long, I’d overshot my target of 140°F by 8 degrees! I flipped them and brushed them again with sauce (no more non-stick cooking spray). It took me about 2 minutes to accept the fact that I’d overcooked the meat, so I flipped both pieces again, sauced them again, moved them to a rimmed baking sheet pan, covered them loosely with foil, and brought them back into the kitchen for a rest. The tenderloins were now at 150°F internal temp.

Here’s how the cooker temperatures and vent settings went during the cooking process. 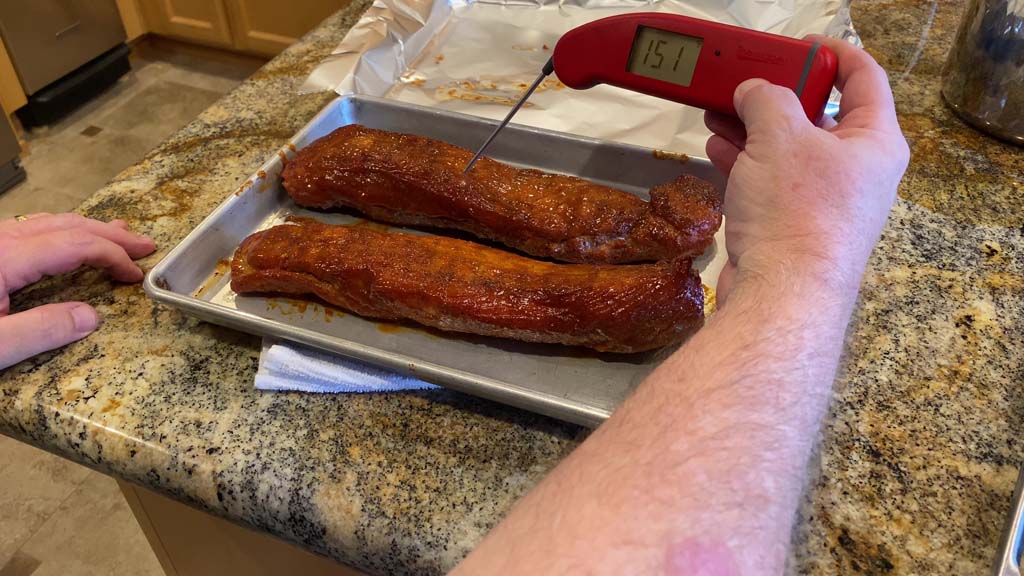 Let the pork tenderloin rest for 10 minutes, loosely covered with aluminum foil, before slicing and serving. 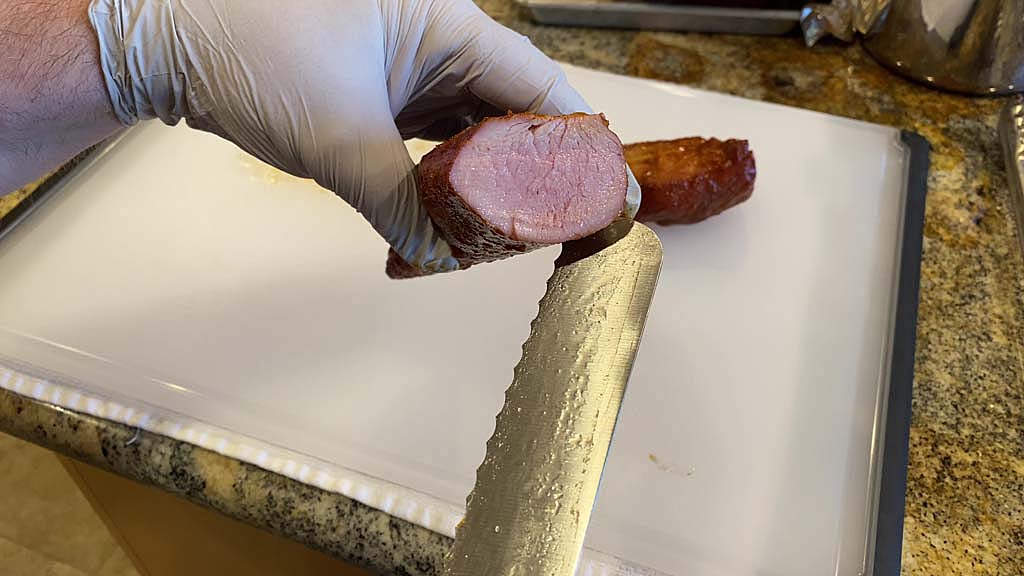 This pork tenderloin was absolutely delicious, and although slightly overcooked for 30 minutes to 150°F internal, it was still plenty moist and juicy inside and still had a slight pink color to the meat. The single chunk of apple wood provided the perfect touch of smoke. The rub and sauce provided the perfect amount of heat. It was so delicious that we didn’t actually “serve” the pork tenderloin…my wife and I stood around and ate it straight off the cutting board!

Here’s a photo showing some of the sauce on the cutting board, so you can get an idea of how it looked. Besides the ketchup, the apple juice and apple cider vinegar were the two dominant flavors. And as I already mentioned, the chipotle powder provided just the right amount of heat along with the chipotle in the rub. 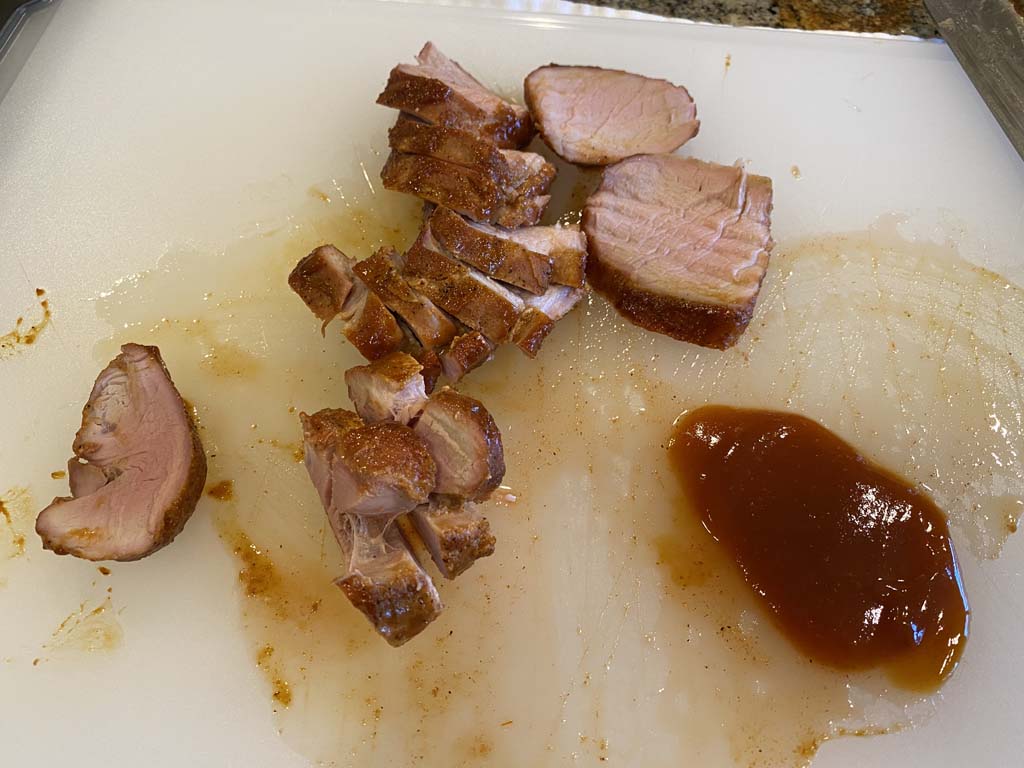 As for the leftover tenderloin, I enjoyed some sliced thin and stuffed into a warm tortilla with just a bit of sauce. So good! In fact, we both agreed the flavors were better on the second day than on the first. 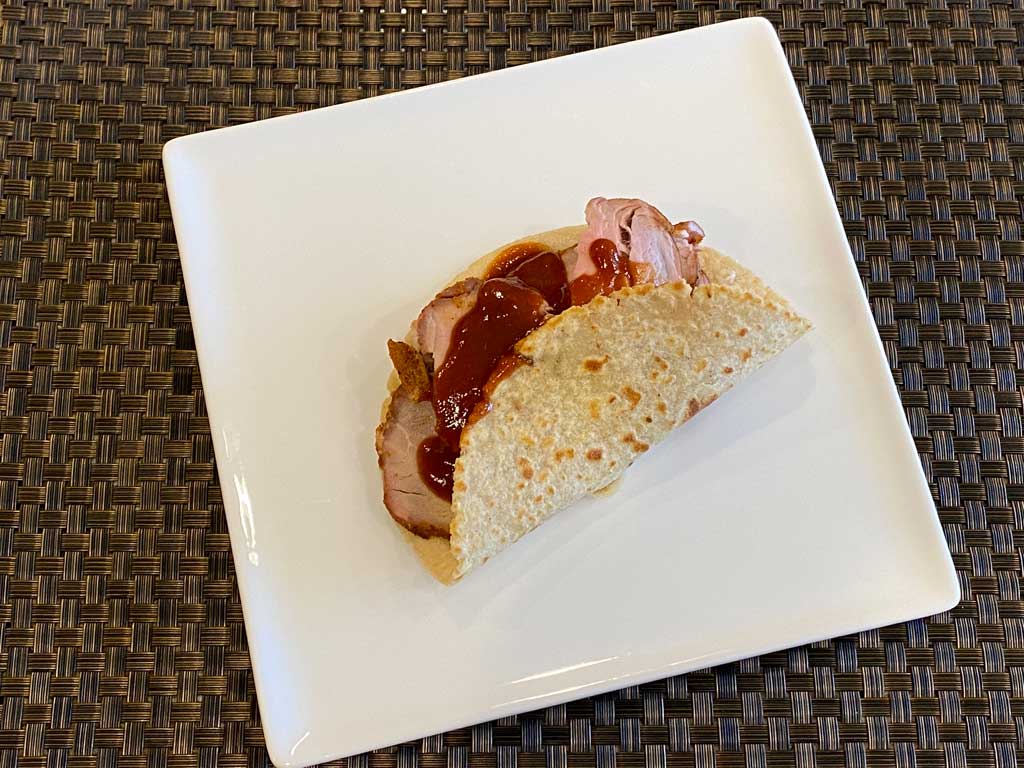 What Would I Do Differently Next Time?

To get closer to my target temp of 140°F and to get better searing on the meat, I might try cooking the meat on the top cooking grate for 20 minutes, turning every 5 minutes, then moving the cooking grate right over the hot coals for another 4 minutes or so until there’s good color on the meat. Finally, I’d sauce the meat quickly once or twice before taking it off the grill for a 10 minute rest in the kitchen, followed by maybe one more thin coat of sauce before slicing.

Another thing I might do differently is cook four tenderloins instead of two. You might as well, it makes for great leftovers!

If you’re a fan of pork tenderloin, try smoking it in the Weber Smokey Mountain Cooker. It’s a fast cook but I think you’ll enjoy the results!