In 2003, several members of The Virtual Weber Bulletin Board posted messages about something called “pig candy”—bacon that’s baked with a brown sugar topping. It’s a decadent treat for special occasions like a holiday brunch. Since then, I’ve seen other recipes that add crushed pecans to the brown sugar mix, and recipes using maple syrup instead of brown sugar.

Here are some pictures I took when I prepared pig candy using the Weber Bullet on December 9, 2004.

Arrange Bacon On A Broiler Pan 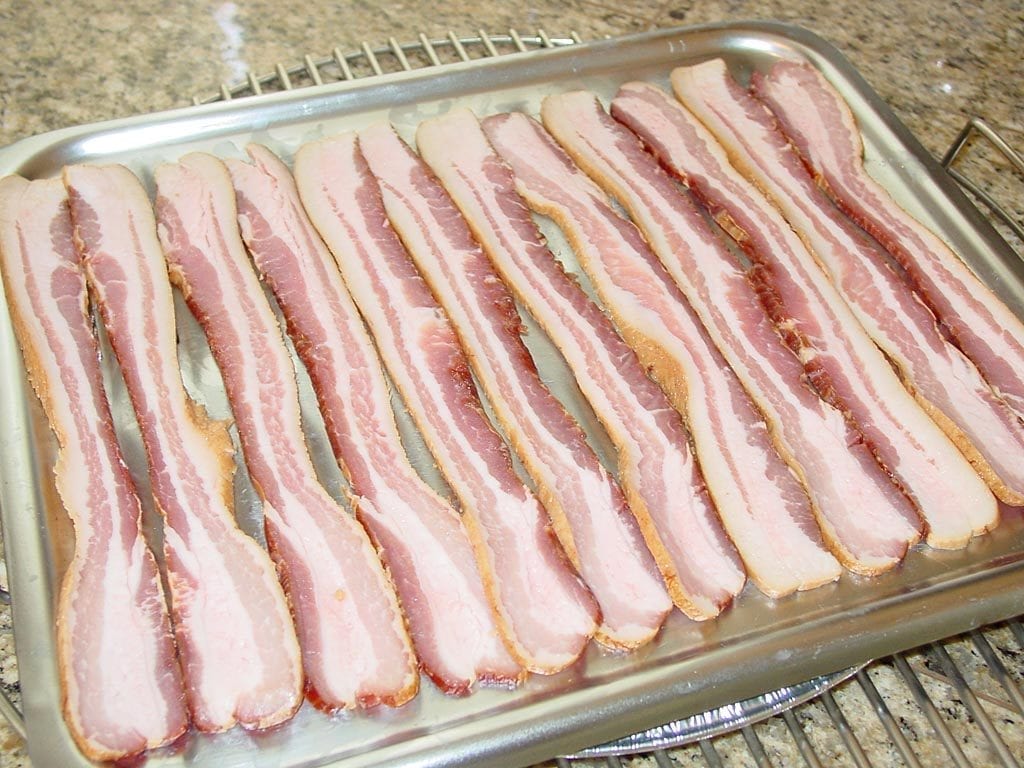 Buy good quality, thick-sliced bacon and arrange it on a broiler pan so the bacon fat drains during cooking.

Before starting, make sure the WSM lid fits over your broiler pan while sitting on the top cooking grate.

I splurged on Niman Ranch Uncured Center Cut Bacon, which has already been apple wood smoked. The 12-ounce package filled the broiler pan, as shown here.

I used a broiler pan because I like to wash the cooking grate after each use and I felt washing a sugary broiler pan would be easier. If you clean your grates by burning them off in a gas grill, you can cook the bacon directly on the top cooking grate, with an empty, foil-lined water pan below to catch the drippings.

Place 1/2 cup of light brown sugar (packed) and 1/4 teaspoon of cayenne pepper in a bowl, mix thoroughly, and set aside. This small amount of cayenne will provide the slightest bit of heat; if you like more heat, use more cayenne.

Light one full chimney of Kingsford Charcoal Briquets. When the coals are hot, spread them out in the charcoal chamber and assemble the cooker.

Do not put the water pan in the cooker.

If you are using a good quality smoked bacon, there’s no reason to add smoke wood to the fire.

Open the top and bottom vents fully and leave them that way throughout the cooking process. 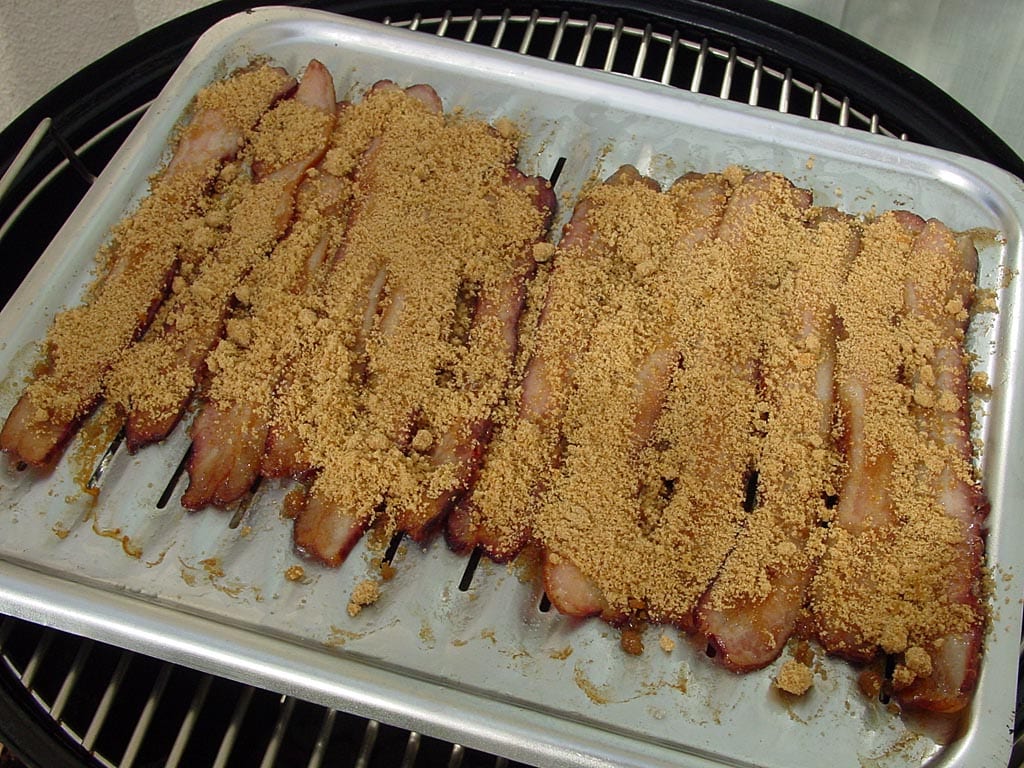 Put the broiler pan on the top cooking grate. The cooker should be running between 300-350°F. After 20 minutes, turn the bacon. If the slices at the ends of the pan are cooking faster than those in the middle, swap them.

Sprinkle the brown sugar topping on the bacon, making sure each slice is evenly coated. I used the entire 1/2 cup of topping, which gave a nice coating to each piece, and the excess just melted away. Other recipes I’ve seen use 1/2 cup brown sugar for 1-3/4 pounds of bacon—over twice as much bacon as I cooked here—so you be the judge of how far you want to stretch the topping.

Cook the bacon another 20-30 minutes, depending on how hot the cooker is running, until done to your liking.

Here’s how the cooker temperatures and vent settings went during the cooking process. Note that the vent percentages represent the way I set the vents at the time indicated. 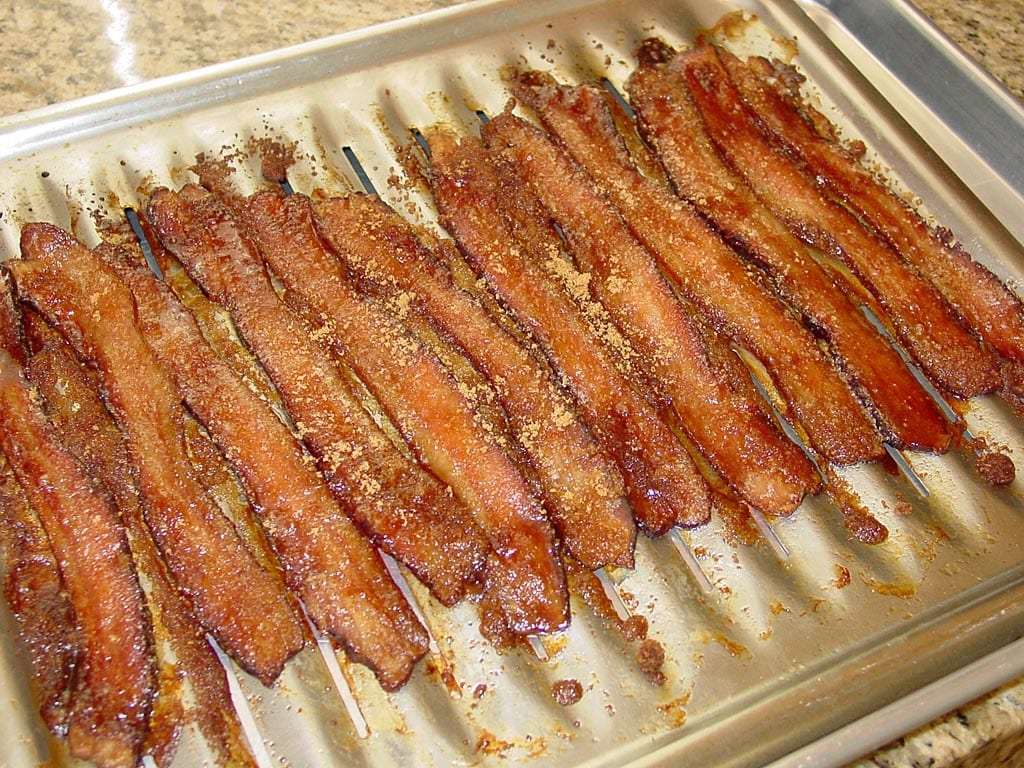 This photo shows the pig candy as it came out of the cooker.

Pig candy is sweet and delicious, and that little bit of cayenne gets your attention without being overwhelming. 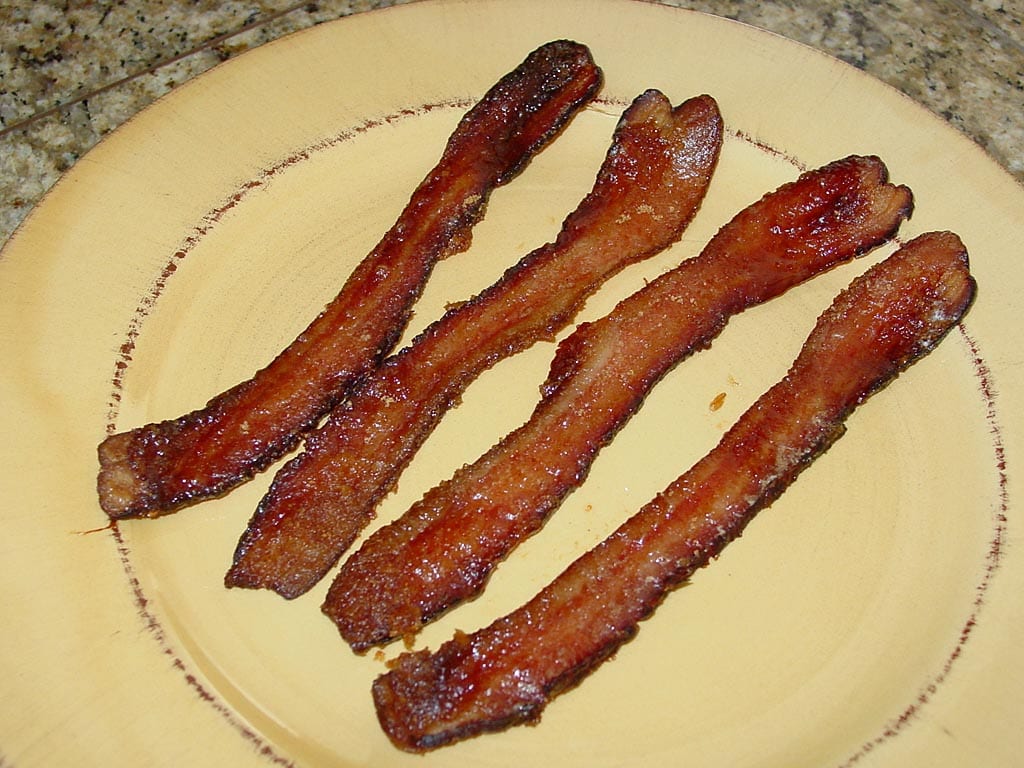 If you’re serving pig candy to your guests at a buffet-style brunch, you may wish to cut the slices in half using kitchen shears. However, there’s nothing wrong with enjoying whole slices. How sweet it is!