I’m not a big seafood fan, and believe me, I would never prepare octopus on my WSM. However, I have two friends who did just that, and the pictures were so compelling that I felt I had to share them with you.

These pictures were sent to me by Geoff Hamamoto and Kevin Kawahara in May 2001 when they smoked two tako (octopus in Japanese) on Geoff’s Weber Bullet. Be warned—the pictures are not for the squeamish! 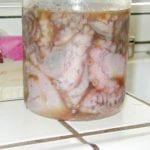 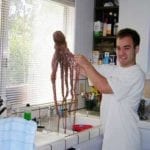 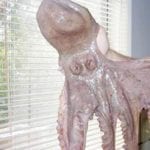 According to Kevin, the two octopus were caught in a secret spot off the island of Oahu and frozen whole in a plastic bag for a year. He placed the plastic bag in cool water for a few hours to defrost the meat, then put it in the refrigerator until ready to use.

Kevin said that despite the year in the freezer, there were no signs of freezer burn, which he attributes to the octopus’ tough skin. Freezing fresh octopus is also considered to be a method of tenderizing the tough meat.

After defrosting, the first step was to clean out the head. “This is done by turning the head inside out,” says Kevin. “If done carefully, all the guts and ink sac will be intact and can be separated without spilling stuff all over the meat. I cut out the beak, eyes and brain stuff, leaving a big pile of slimy octopus meat that is totally edible.”

The next step was to de-slime and tenderize the octopus. This is done by firm massage with Hawaiian sea salt. “You salt it up, massage it, let it rest, rinse, and repeat until all the slime is gone,” says Kevin. “Some people beat the meat on a board with a bat or stick to tenderize it, but I prefer to ‘lomi’ the meat by hand.”

At this point the octopus was ready to marinate. In retrospect, Kevin felt he should have let it soak for a while in cool water to rinse it better, because it ended up being a little salty after marinating and cooking.

The octopus was marinated for about 30 hours in a mixture of sake, mirin, shoyu, sesame oil, salt, garlic, black pepper, dried red pepper flakes, and shichimi. This marinade was inspired by a recipe posted by MattD on The Virtual Weber Bulletin Board. 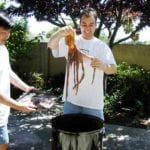 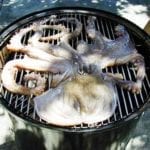 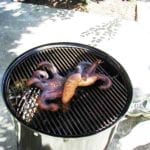 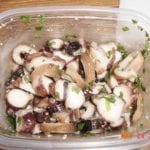 Geoff and Kevin lit a full Weber chimney starter of Kingsford charcoal, dumped the hot coals into the charcoal ring, then added a bit more unlit Kingsford for good measure. When the coals were all hot, they filled the water pan and placed some split kiawe smoke wood on the coals.

The smaller octopus went on the lower grate and the larger one on the top. Kevin says, “Since the head is like a deflated balloon, I cut them open so they would lay flat.,”

The top octopus was finished in 1-1/2 hours, while the bottom one cooked about 30 minutes longer.

To prepare the head meat, Kevin peeled off the fatty skin and cut the meat into ringlets. “Perfectly done,” says Kevin. “Very soft, though a bit salty, but the smoke taste was awesome.” He then made tako poke by cutting up some of the leg meat and mixing it with sesame oil, toasted sesame seeds, green onion, a little sweet onion, and inamona. This mixture helped cut the saltiness and was “ono”.

Kevin concludes, “I can’t wait to do it again. Maybe next time I’ll do some ‘ika’ and ‘awabi’, as well.”

Photographs of octopus preparation and smoking: 2001 by Naoko Hamamoto.
Photograph of tako poke: 2001 by Kevin Kawahara.