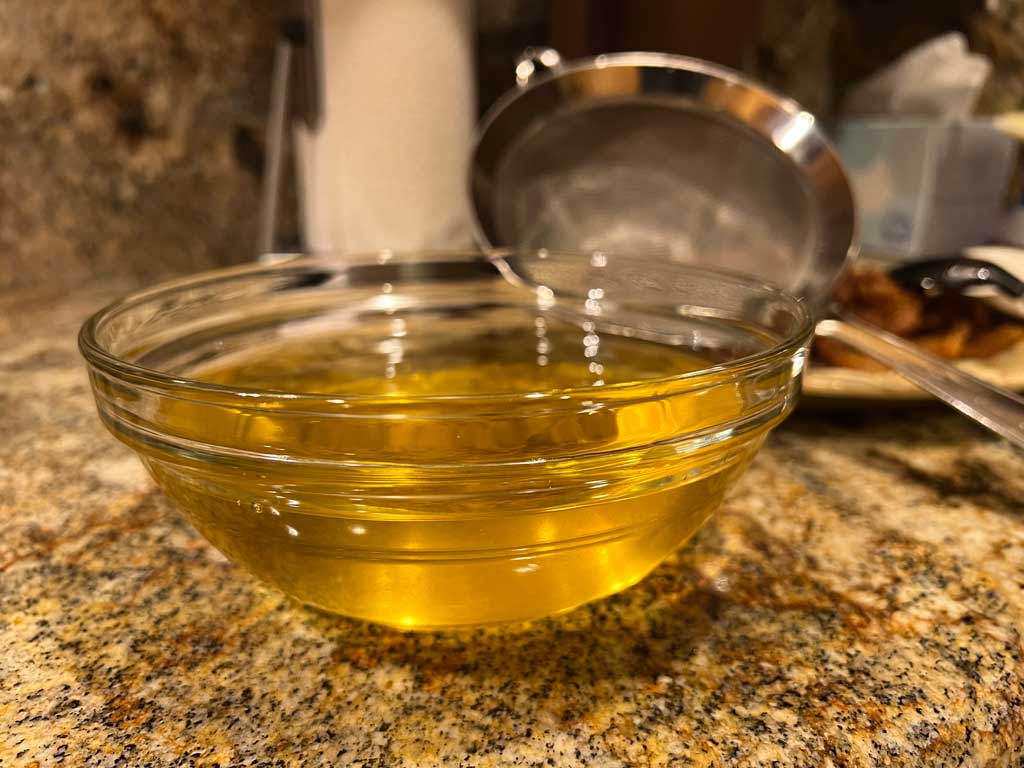 Beef tallow is nothing new. It’s been used for ages to make candles, soap, skin moisturizers, lubricants, and, of course, as a cooking fat. It’s been quietly used to make barbecue for quite some time, but in February 2021 tallow burst onto the scene as “the secret” of great Texas brisket. Everyone started posting YouTube videos showing how to make tallow and how they thought it could be used to make better brisket, whether it was applied to the butcher paper or poured over the brisket or even injected into the brisket, and even if tallow could be used to improve the results when cooking lower grades of brisket.

Among barbecue fanatics, the most common use for beef tallow is to make moist, juicy brisket. Tallow is widely available in better supermarkets and from online retailers, but it’s easy to make at home using the fat scraps from a beef brisket.

In this video, I describe the process I followed when making beef tallow using a Dutch oven in my kitchen oven. If you have room in your smoker, you can make tallow while smoking a brisket, which has the added benefit of giving the tallow a smoky flavor. I would have tried this, but I was cooking two briskets in my 18.5″ WSM—no room for tallow—so I rendered the fat in the oven the night before smoking the briskets.

Trim any meat from the fat and cut any large chunks of fat into 1″ pieces.

If using your kitchen oven, place the fat into an uncovered Dutch oven and away you go! 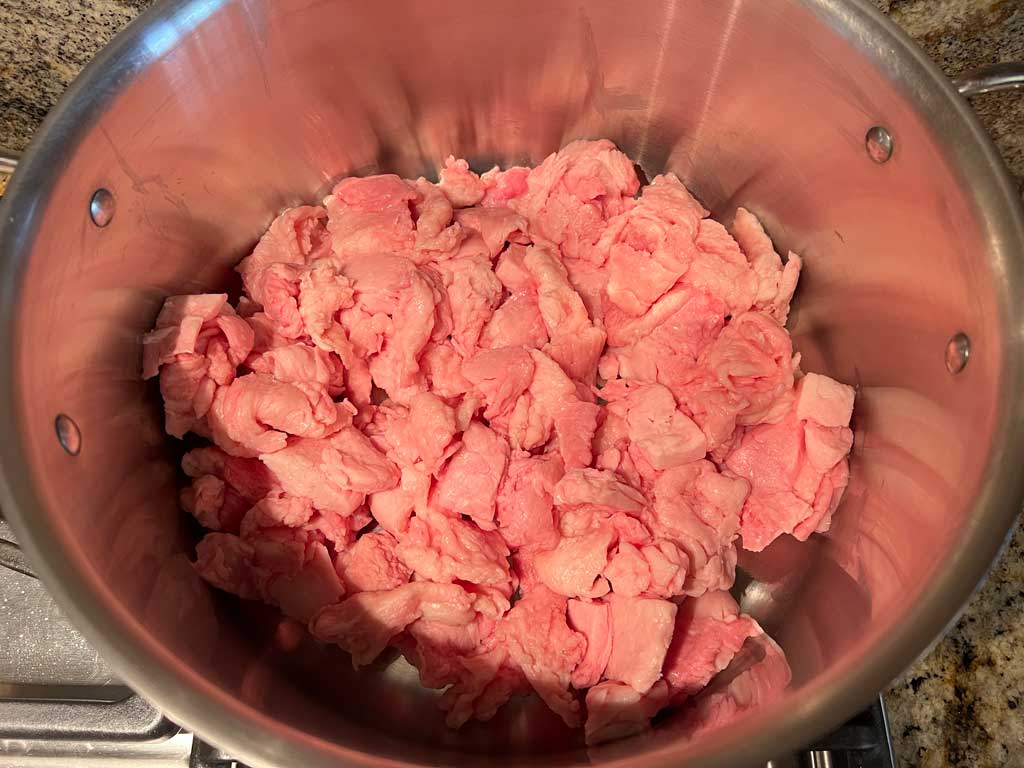 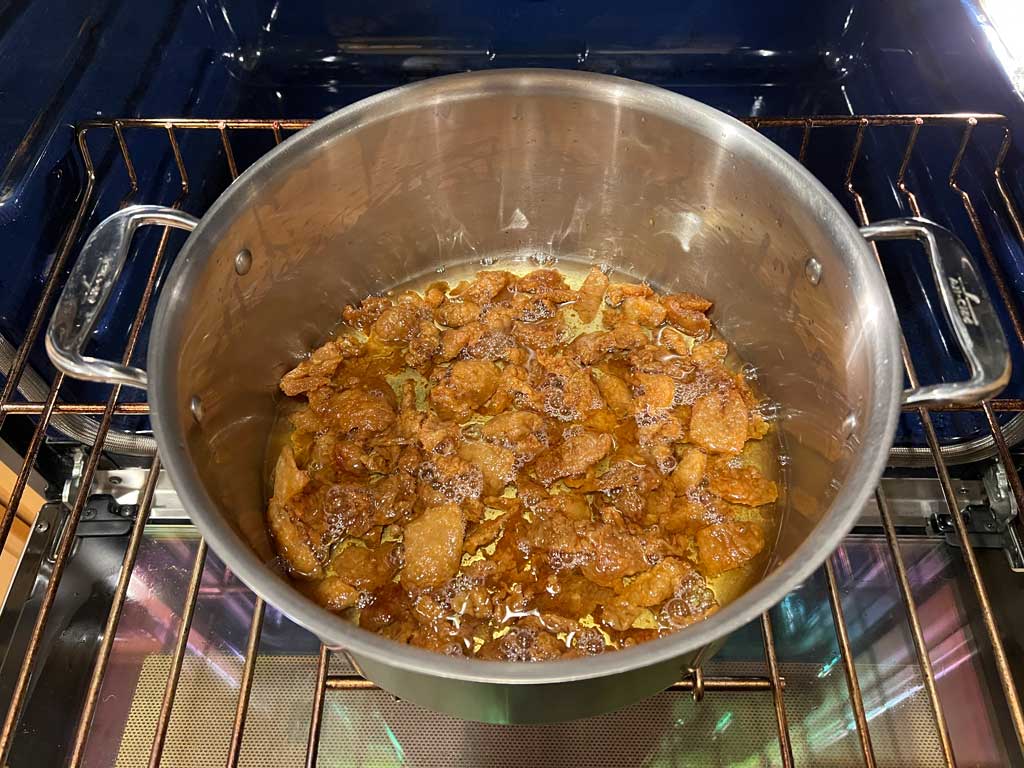 If using the Weber Smokey Mountain Cooker, cook your brisket on the top cooking grate and render the fat scraps in a disposable foil pan on the bottom cooking grate. To minimize burning, use two disposable pans, one inside the other, separated with some crumpled foil balls to create an air-insulated gap between the two pans.

If your smoker has a wide cooking grate (e.g. a pellet smoker or a stick burning pit), you can place the disposable pan on the grate next to the brisket.

Depending on your intended use and how long you want to store the tallow, you may want to strain it and remove any accumulated meat juices.

If you rendered using your kitchen oven and you were meticulous about trimming meat from fat, the liquid tallow will contain no meat juices. To remove any fine bits and particulate, run the liquid through a cheesecloth-lined strainer into a bowl, then transfer into an airtight jar. If you have a large funnel, you can line it with cheesecloth and funnel the liquid directly into a jar.

If you rendered in your smoker using a pan under a brisket, you’ll end up with a mix of liquid tallow and meat juices. You can use it as-is when wrapping a brisket during the cooking process or pour it over a brisket before slicing. But if you want to store the tallow for an extended period of time, you should remove the meat juices. Run the liquid through a cheesecloth-lined strainer into a bowl to remove any particulate, then transfer the bowl to the refrigerator and let the tallow harden. The tallow will float to the top of the bowl and the meat juices will collect on the bottom. Pop the contents out of the bowl and remove all of the meat juices—they can be used to amp-up the flavor of leftover brisket or in a barbecue sauce recipe. Then warm the tallow and funnel it into an airtight jar for long-term storage.

The website Tru Beef Organic says that cooled, solidified beef tallow can be stored in an airtight container at room temperature in your pantry for up to a year without going rancid. It will last even longer in the refrigerator and indefinitely in the freezer.

If you open your stored tallow and find any signs of separation, just stir the contents before use.