This topic explains how to hold barbecued meats at temperature before serving; how to prepare cooked meat for refrigerating and freezing; and how to reheat meat for best appearance and moisture retention. 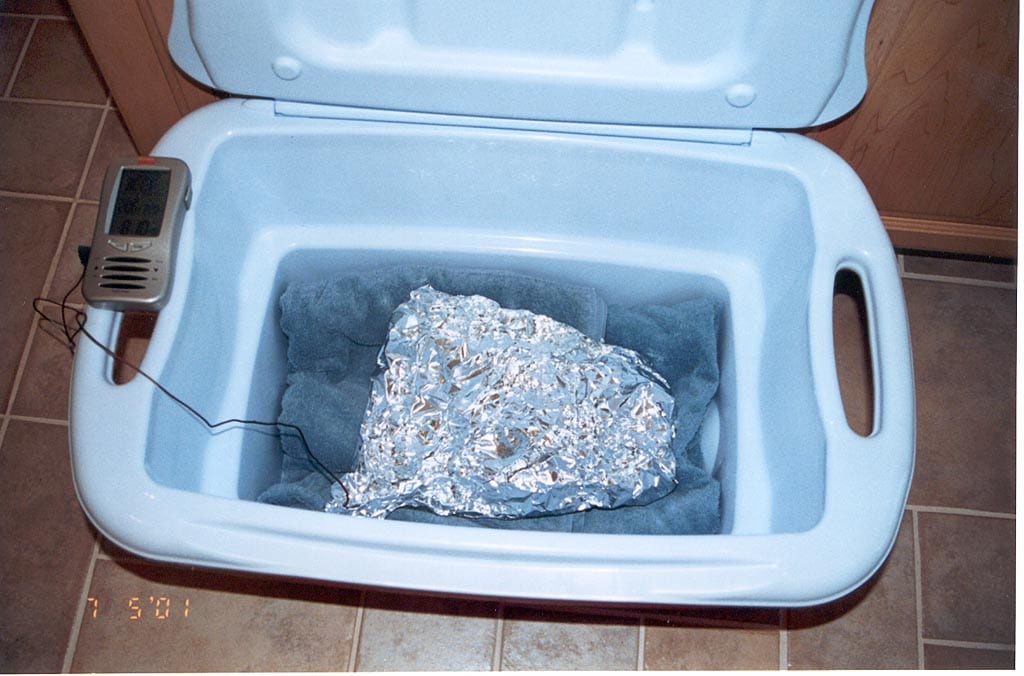 It’s 11:30am. You’ve just finished cooking a brisket overnight, but your guests won’t be arriving until 2:00pm. The oven is off-limits because it will be used to cook other food. What will you do?

According to the USDA Food Safety and Inspection Service (FSIS), meat must be held above 140°F in order to be safe. You can hold cooked meat above this temperature for 2-4 hours or longer by using an empty cooler. Just follow these steps:

To keep meat warm even longer, preheat the cooler first. Here are several ideas on how to do this:

The length of time you can hold meat above 140°F depends on:

As noted in the Brisket – Midnight Cook article, I held a brisket above 140°F for 3 hours and 15 minutes using this method—but without preheating the cooler or placing additional insulation over the meat.

Holding Meat At Temperature In The Oven

I’ve done some experimentation with holding finished brisket for 4 hours in my electric home oven at temperatures between 140-150°F. To learn more, including a video on the subject, see Using An Electric Oven To Hold Brisket At Temperature.

Does Barbecue Stand Up To Storage And Reheating?

Some foods just seem to taste better after being refrigerated and reheated, while other foods don’t. Whether barbecue belongs in the former or latter category is a matter of personal opinion and probably varies from meat to meat.

Here’s my take on the “big four” barbecue meats:

Brisket tastes great as leftovers, but the “bark” gets soft during storage and reheating, so enjoy the bark when the meat is freshly cooked. Brisket refrigerates and freezes well, but you have to take care to not dry it out during reheating.

Pork butt performs much like brisket. It tastes great as leftovers and it refrigerates, freezes, and reheats very well. “Mr. Brown” (the chewy exterior meat) will soften during storage and reheating. The fat content of pork butt helps keep it moist during reheating.

Pork ribs are best enjoyed right out of the smoker. I refrigerate and reheat ribs, but never enjoy them as much as the first time around. I don’t freeze ribs, but some people do and say they reheat just fine.

Chicken is another meat that’s best fresh from the smoker. The meat itself sometimes tastes better after refrigerating and reheating, but the skin softens up and really suffers. As with ribs, I don’t freeze chicken, but some people do and say it freezes and reheats quite well.

The bottom line is that most barbecued meats can be refrigerated, frozen, and reheated with success.

How To Store And Reheat Leftovers

You’ve just cooked a pork butt and it turned out great. Now you’re staring at 2 pounds of leftover pulled pork. How should you store it? In what kind of packaging? In the refrigerator or freezer?

According to the USDA FSIS, cooked meat can be refrigerated safely for 3-4 days. For storage longer than four days, cooked meat should be frozen.

For leftovers that will be eaten within four days, use Ziploc bags, wide, heavy-duty aluminum foil, or plastic storage containers. Try to squeeze out as much air as possible before sealing.

For long-term freezer storage, divide leftovers into serving portions and packaging using a FoodSaver vacuum sealing machine to avoid freezer burn. If you don’t have a FoodSaver, wrap portions tightly in aluminum foil or freezer paper first, then place in a Ziploc freezer bag, squeezing out as much air as possible before sealing. Aluminum foil is especially good at preventing freezer burn, while the plastic bag prevents odor penetration.

This photo shows pork butt being packaged with a FoodSaver.

This photo shows a package of frozen, vacuum-packed sliced brisket, just enough for one sandwich. 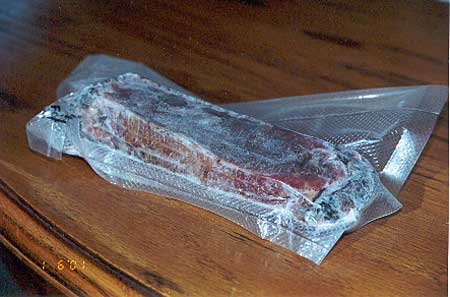 There are several ways to reheat small quantities of leftover barbecue. Using the microwave, place meat on a microwave-safe plate and cover loosely with plastic wrap or wax paper, or heat right in the Ziploc or FoodSaver bag (just open the bag slightly to vent). Heat for 2 minutes at 20-30% power setting. Check the meat temperature and repeat in 1-2 minute increments until warmed to your liking.

Meat in sealed FoodSaver bags can also be reheated in boiling water. Bring a large pot of water to a boil, place the sealed bag in the water, turn off the heat, and let sit in the hot water until warmed to your liking.

Pulled or chopped meat should be stirred and sliced meats rearranged during reheating to ensure even warming. If the meat seems a little dry, add a little barbecue sauce, apple juice, or broth.

Large quantities of barbecue can be reheated in the oven or smoker using the methods described below.

Preparing Barbecue Ahead Of Time

It’s Saturday night and you’ve just finished cooking a brisket and two pork butts for a party on Sunday afternoon. Should you slice the brisket and pull the pork now, or after you reheat it on Sunday? What about chicken and ribs—should they be reheated whole or in pieces?

Brisket is easy to slice while warm but difficult to slice when cold. After cooking the brisket and letting it rest, slice the brisket across the grain and arrange in a baking dish or disposable foil pan. Cover tightly with aluminum foil and refrigerate. To reheat, spritz the meat with apple juice or low-sodium beef broth and add 1/8″ of the same liquid to the bottom of the pan. Cover tightly with foil and heat in a 200-250°F oven or smoker until warmed to your liking. Just before serving, brush on a thin layer of your favorite barbecue sauce to give the slices a nice sheen.

If you prefer to keep the cooked brisket whole and unsliced, wrap it in foil and refrigerate. Before reheating, open the foil and add some juice or broth as described above, and close the foil tightly. Heat in the oven or smoker at 200-250°F until warmed to your liking, then slice and serve.

To freeze a whole, cooked brisket, wrap it tightly in foil and place in a 2-gallon Ziploc bag. Defrost the brisket in the refrigerator before reheating in foil as described above.

Pork butt must be pulled while warm. My preference is to pull the pork after cooking, mix in some leftover rub for added flavor, and place in a baking dish or disposable foil pan. Cover tightly with aluminum foil and refrigerate. To reheat, spritz with apple juice or broth, or stir in a little barbecue sauce, cover tightly with foil, and heat in a 200-250°F oven or smoker, stirring occasionally, until warmed to your liking.If you prefer to keep the cooked pork butt whole and unpulled, wrap it in foil and refrigerate. Heat in the oven or smoker at 300°F until warmed to your liking, then pull, add leftover rub, and serve.

To freeze a whole, cooked pork butt, wrap it tightly in foil and place in a 2-gallon Ziploc bag. Defrost the pork butt in the refrigerator before reheating in foil as described above.

Pork ribs should be wrapped tightly in aluminum foil and refrigerated. Slabs may be cut in half for easier handling. To reheat, place foiled ribs in a 200-250°F oven or smoker and heat until warmed to your liking. Remove from the foil and brush with your favorite sauce for a nice sheen. Serve as half slabs or cut into 1-3 bone pieces.

To freeze cooked slabs of ribs, cut slabs in half, wrap tightly with foil and place in a 2-gallon Ziploc bag. Defrost the ribs in the refrigerator before reheating using one of the approaches described above.

Ribs can also be stored using a FoodSaver machine, but the bones poke holes in the plastic bag, so wrap the ribs in two layers of plastic wrap before vacuum packing. Defrost the ribs in the bag in the refrigerator, then reheat using one of the methods described above, or using the boiling water method described in the previous section on leftovers.

Chicken may be cut into pieces after cooking and wrapped tightly in aluminum foil or placed in a baking dish or disposable foil pan. Cover tightly with aluminum foil and refrigerate. To reheat, place the chicken in a 200-250°F oven or smoker and heat until warmed to your liking. Baste with a very thin coat of your favorite sauce before serving.

When To Discard Leftover Barbecue

The USDA FSIS recommends that any hot or cold food left at room temperature for more than 2 hours (or 1 hour if the temperature is above 90°) should be discarded. This may seem like overkill, but it’s better to err on the side of safety. Protect your health and that of your family and friends by refrigerating or freezing leftovers as soon as possible.

How Long Is Frozen Meat Safe? How Is Quality Affected?

According to the USDA FSIS, cooked meat that is kept frozen at 0°F is safe indefinitely, but the taste and texture will deteriorate over time. For best quality, frozen meats should be consumed within 2-3 months.

For longer term storage, use a FoodSaver machine to vacuum pack the meat, or wrap in airtight foil or freezer paper and place into a Ziploc freezer bag. If you have one, store meat in a freezer chest at 0°F to avoid the continuous freeze/thaw cycles of “frost-free” refrigerator freezers.