Firing Up Your Weber Bullet 2/2 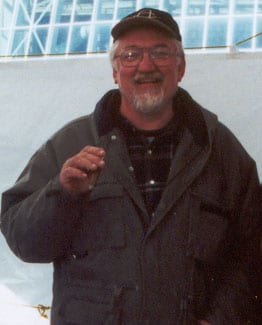 “I was cooking in a competition, and on the morning of the turn-ins I had my wife go to a shop and pick up my first WSM. I put it together, filled the ring with charcoal, and needed a way to light if off. I never did read the directions. I decided to do what is today call ‘The Method’.

“We took a 1st in chicken and 2nd in ribs that day. I got home and was reading Ray’s forum and the question was asked on how to control the temps on a WSM. I answered, and the rest is history.

“The only real debate was the fact that you were putting unburnt charcoal in the ring and it was lighting off as you go. Knowing a little about Jedmasters, I knew this was not really a problem and the results answered that.”

– The history of the Minion Method, as told by Jim Minion to The Virtual Weber Bulletin Board

The concept behind the “Minion Method” is simple:

One of the advantages this method has over the Standard Method is that there’s less of a chance that the cooker will run hotter than you want. This is because it’s easier to start with just a few hot coals and bring the cooker up to 225-250°F than it is to start with a red-hot cooker and fight to bring it down to 225-250°F.

If there’s any controversy about the Minion Method, it’s that it contradicts the conventional wisdom that says all charcoal briquettes must be fully lit and covered with gray ash before cooking begins. Everyone knows how bad charcoal briquettes smell while lighting, so some people assume that this smell permeates the meat during cooking, since fuel is lighting continuously over many hours. Interestingly, the Minion Method does not seem to affect the appearance, aroma, or taste of food, and it is used with great success by many winning teams on the competition barbecue circuit.

There are some individuals with sensitive palates who claim they taste an off-flavor in food cooked using the Minion Method. If you find yourself in this group, or if you have health concerns about cooking food over charcoal that is not fully lit, use the Standard Method instead, replenishing the cooker with pre-lit coals every 4-6 hours.

I use the Minion Method whenever cooking at 225-250°F, regardless of the length of cooking time. When finished, close all vents to extinguish the fire. When the charcoal is cold, sift out the ashes and save the remaining unburned fuel for next time. 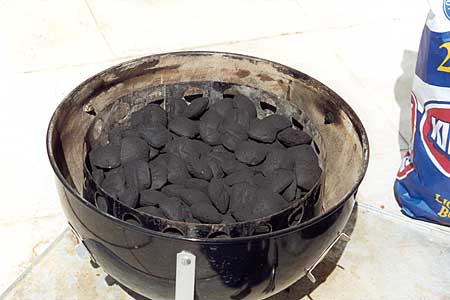 Start by filling the charcoal chamber to the top with unlit charcoal briquettes. You can use any charcoal product, but experience shows that Kingsford Charcoal Briquets provides the longest, most consistent burn. 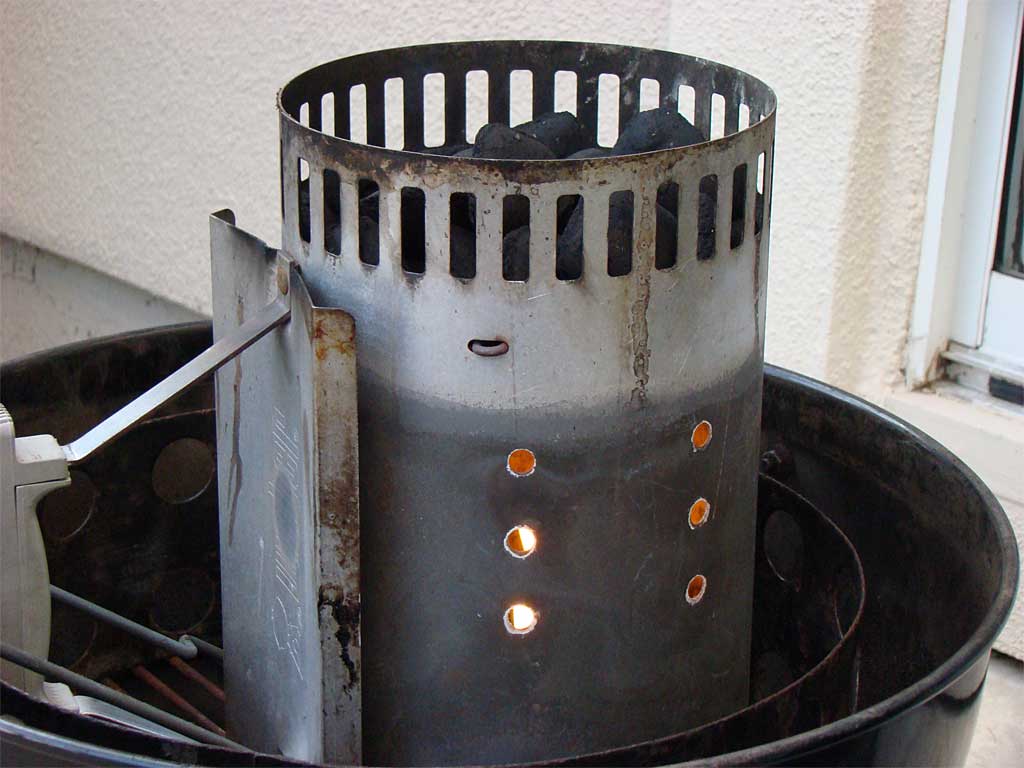 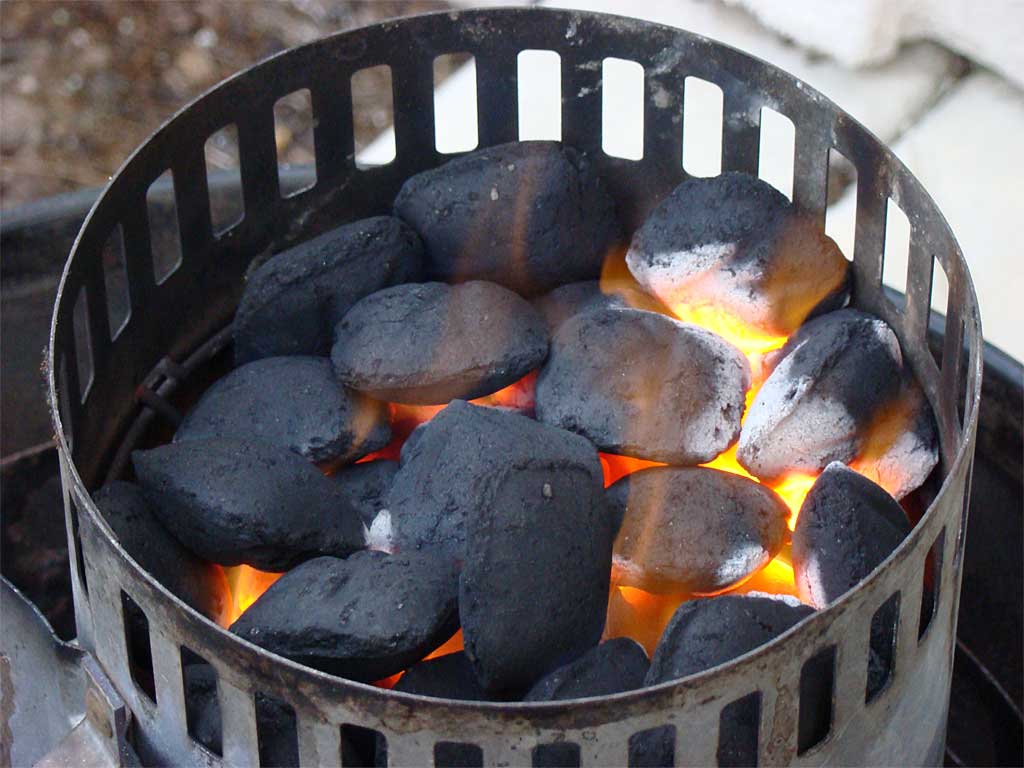 These pictures show 30 briquettes being lit in an upside-down Weber chimney starter. Tips on lighting small amounts of charcoal can be found in the How To Use A Chimney Starter article. 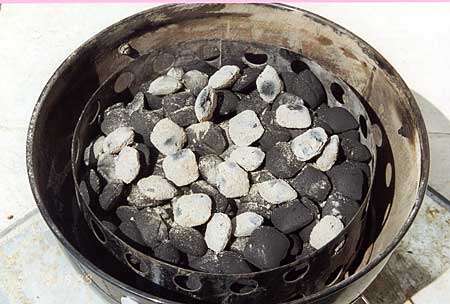 When the coals are covered with gray ash, spread them evenly over the unlit briquettes in the charcoal chamber.

Add the meat and smoke wood to the cooker immediately. The cool meat helps to control the ascent of the cooker temperature.

The cooker temperature will begin to rise gradually. When it reaches 200°F, adjust all three bottom vents to 25% open and monitor the temp carefully until it reaches 225-250°F. Adjust the vents as necessary to maintain this temp.

Using the Minion Method, you can start cooking in about the time it takes to light a few briquettes in a chimney starter—15-20 minutes tops.

If the cooker temperature begins to drop after 10 hours, gently tap on the charcoal bowl legs to dislodge accumulated ashes and refresh the coals without getting ashes on your food. If you’re daring, you can remove the lid and middle cooking section as a unit and stir the coals vigorously with tongs. This can be dangerous and messy, especially if you dump the contents of your cooker on the ground or into the hot coals. Remove the cooking section at your own risk. Weber warns that you should never move a hot cooker and you should never operate it unless all parts are in place.

Check the water pan every 2-4 hours and add hot water, as needed.

Depending on the weather and the amount of food being cooked, it may be necessary to add fuel after 12 hours of cooking. Light a full or partial Weber chimney starter of charcoal and add the hot coals to the cooker.

There are countless variations on both the Standard Method and the Minion Method. Here are some of the most popular ones. Use these as-is, or as a starting point for developing your own variation.

Over the years, Jim Minion made adjustments to “The Method” as he learned more about barbecue and the Weber Bullet. Back in the early days, he did a few things differently. He would use hot water in the pan and allow the cooker to come up to 240-250°F before adding the meat. The cooker temperature would drop after the meat goes in, so he would leave the bottom vents fully open until the temp came back up to about 200°F, then start adjusting the bottom vents to maintain 225-250°F.

Fill the charcoal chamber with unlit briquettes, but move some briquettes from the center toward the edges, creating a depression into which you pour the hot coals. Thanks to Tom Kitslaar for suggesting this method on The Virtual Weber Bulletin Board.

Minion Method – Hot Coals In A Coffee Can 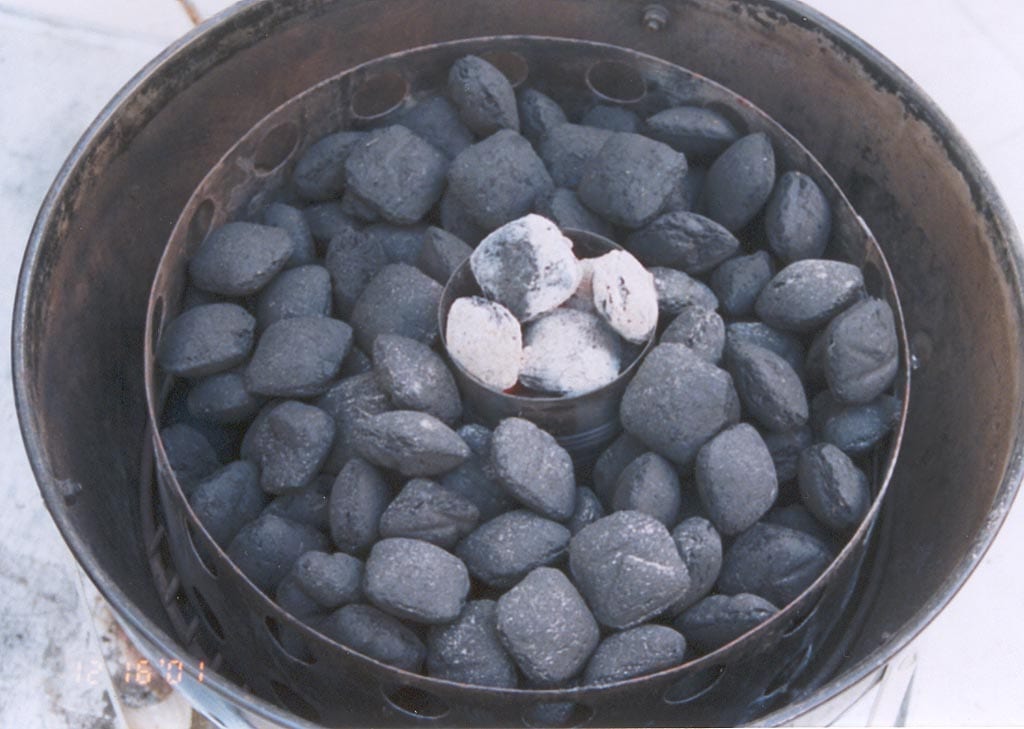 Place a small, bottomless coffee can in the center of the charcoal chamber. Fill around the can with unlit fuel. Put hot coals inside the can, then carefully remove using a pair of channel locks and heat-resistant gloves. A photo of this approach is shown here. Thanks to Bruce Kennedy for suggesting this method on The Virtual Weber Bulletin Board.

Today, instead of using a chimney starter to light a few briquettes, Jim Minion simply hits the unlit charcoal with a weed burner or propane torch to get a few burning, then assembles the cooker, adds meat, and starts monitoring the pit temp and vent settings.

For shorter cooking sessions, follow the Minion Method steps described at the top of this page, but only partially fill the charcoal chamber with unlit charcoal, then add 20 lit coals on top. This works well for 6-8 hour cooks. The snake charcoal method is a popular way to fire a Weber kettle for low & slow barbecue, using rows of layered briquets and smoke wood arranged in a circle around the perimeter of the charcoal bowl. Light one end of the snake and the fire burns slowly until it reaches the other end.

This modified snake method, shown here in a 22.5″ WSM, uses a piece of firebrick as a separator between the start and end of the snake. The coffee can in the middle keeps the fire moving in a circular direction; the gravel inside stabilizes the can while pouring briquets around it. Several fist-sized chunks of smoke wood are buried under the charcoal and placed on top. Light a small amount of charcoal, pour it on one end of the snake, and away you go. Leave the lid vent open 100% during the cook, start with all three bottom vents 50% open and adjust as needed to maintain around 250°F.

Thanks to David Orona for sharing this method and photo.

Variations using no water in the water pan result in even longer burn times, since no energy is spent heating water. However, no water means potentially higher cooker temperatures, so the amount of fuel you start with and the vent settings become critical. Even small changes in settings can result in large temperature swings, so be careful.

Adding Smoke Wood To The Fire

Here are some of the ways that people add smoke wood to the fire.

By the way, don’t bother soaking wood chunks before use. It’s not necessary as long as you’re using decent-sized chunks, and the water doesn’t penetrate seasoned wood very much, anyway.

This is my favorite approach regardless of how I fire-up my WSM. Distribute the wood chunks evenly over the surface of the lit charcoal after putting the meat in the cooker. This keeps you from getting blasted with smoke while adding the meat, getting the probe thermometer setup, etc. If using the Minion Method, make sure some wood touches the hot coals to start generating smoke right away.

This technique is only possible when firing the cooker using the Minion Method. Bury wood chunks throughout the unlit fuel so the tops of the chunks are exposed. Distribute the hot charcoal evenly over the unlit fuel, making sure some of the coals touch the smoke wood to start generating smoke right away.

All of the fire-up methods described in this topic will work using lump hardwood charcoal instead of briquettes. However, there are a few things to keep in mind when using lump.

Lump charcoal is a natural product that is inconsistent by nature. It tends to burn very hot for a while, then drop off in temperature. It does not burn as long as briquettes, and performance may vary from one batch or variety of wood to another. As a result, you must pay careful attention to vent settings to make sure the fire does not get too hot. Otherwise, you’ll be fighting to bring the cooker down to your target temp. Also, you may have to add more fuel to the cooker sooner than if you use briquettes.

For methods to prevent small pieces of lump charcoal from falling through the charcoal grate, visit the Charcoal Grate Modifications page.

I would suggest storing leftovers in a separate charcoal bag. Next time you cook, lay down a bed of fresh charcoal first followed by leftover charcoal on top. This ensures that almost all of your leftover charcoal gets consumed during the cook and is not carried over to subsequent cooks.

Using Wood Chunks Or Logs Instead Of Charcoal

The WSM is designed to use charcoal as its fuel source. Occasionally, someone notices that other cookers are fired using split logs and attempts this in the WSM. Wood chunks or logs can be used, but with considerable effort, inconvenience, and expense. Wood must be burned down to hot coals before cooking can begin and then more wood added throughout the cooking process, causing wide fluctuations in cooker temperature. Also, wood is expensive, charcoal is cheap. Most people only try this once.