I have three friends that own Weber Smokey Mountain Cookers, and a while back we decided to get together and smoke up a bunch of ribs. Not just any ribs, but the good ones—the small, tender slabs you find in the best barbecue joints.

On a warm Saturday in May 2001, we held “RibFest 2001”, cooking up 21 slabs of ribs on four WSMs. Not only did we have a great time together and eat a lot of good ribs, but we learned a lot in the process because we could compare various rubs and cooking techniques in a side-by-side taste test. It’s the kind of event you should try with your friends if you ever have the chance. 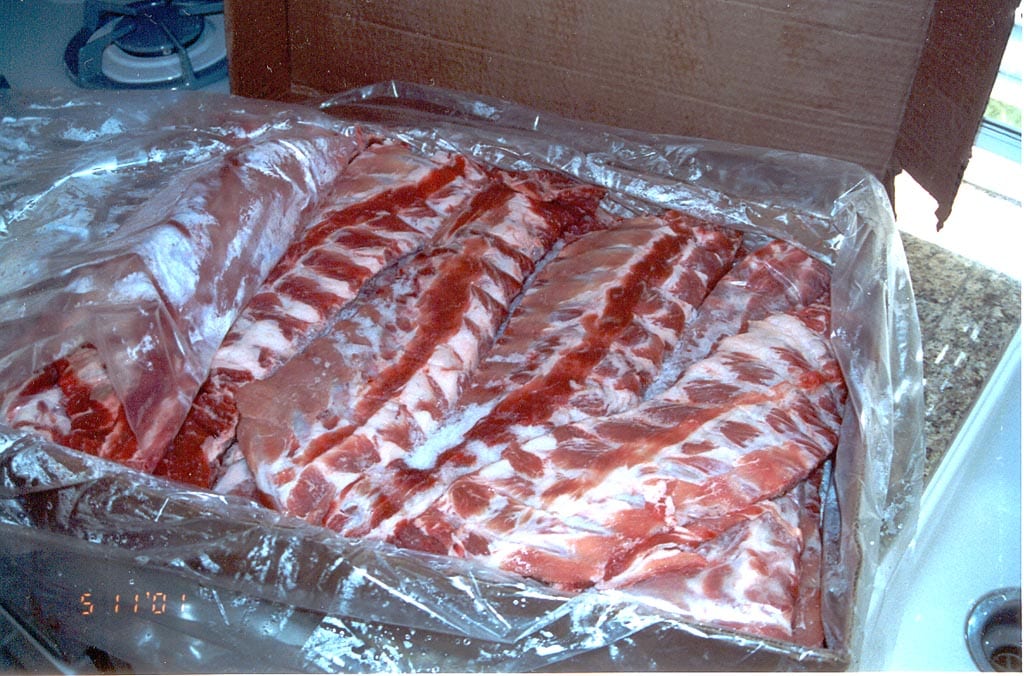 I picked up the ribs a few days later on a Friday afternoon. The box they brought out to the counter weighed 35.4 pounds. I found it hard to believe that a box so small could weigh so much. A quick calculation in my head told me that I was getting more slabs than I had bargained for. The cashier levied the $200+ charge against my credit card and a nice man carried the box out to my car. Great service for such expensive bones!

When I got home, I cut the plastic straps, opened the box, and found a big plastic bag containing layer after layer of ribs, each layer separated by a plastic sheet. Some of the ribs on top were starting to thaw, but most were still frozen. Since the box would not fit in my refrigerator, I transferred the ribs into two large plastic bags and put them in the fridge. I counted, “15 slabs…16, 17, 18, 19, 20…21 slabs!” Wow, we better invite some friends over to help us eat all these! 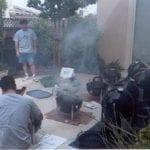 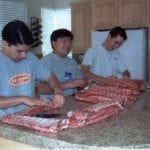 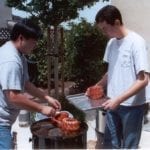 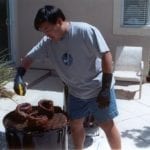 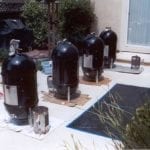 My friends arrived at my house on Saturday morning and set up their Weber Bullets on the patio alongside my cooker. I put down some cardboard to protect the patio from any cooker drips that might occur, and I taped down several plastic garbage bags to give folks a place to set down cooker parts. This worked great—at the end of the day, I removed the cardboard and plastic and still had a clean patio.

We each fired a Weber chimney starter full of Kingsford Charcoal Briquets and followed that up with another 1/2 to 3/4 chimney full of additional unlit briquettes.

With the cookers started, we came inside and I unveiled the 21 slabs we had to prep and rub. I wrapped the kitchen island with plastic wrap and we used it as a work surface to remove the membranes and excess fat from the slabs, per the methods shown in the Pork Loin Back Rib Preparation article. When we were finished, we rubbed and rolled the ribs and secured them using bamboo skewers. The second photo above shows my friends hard at work (left to right: Duncan “Cam” Engel, Geoff “Moto” Hamamoto, and Brian “The Hammer” DeHamer).

Twenty-one slabs worked out to 5 slabs per cooker with one leftover, which I put in my cooker. We each applied three different rubs to our ribs—some commercial products and some rubs that we mixed ourselves—giving us 12 different varieties to taste. We each used a different smoke wood—pecan, alder, apple/cherry, and oak/hickory—and we sauced some ribs during cooking and some after, using three different sauces. Finally, we decided to cook some ribs longer than others to see how the tenderness would be affected.

We quickly realized that if we weren’t careful, we’d end up with all the ribs done at the same time, which would make taste testing difficult. So we decided to stagger our starting times. This would give us a chance to sample a batch of ribs while they were hot, then move on to the next batch, and so on.

I put my ribs on first and planned to cook them the longest, somewhere around 5 hours. The other ribs would cook for 4 to 4-1/2 hours and would go into the cookers in 30 minute increments. This would allow us to taste ribs every 30 minutes, with my long-cooked ribs being tasted last. 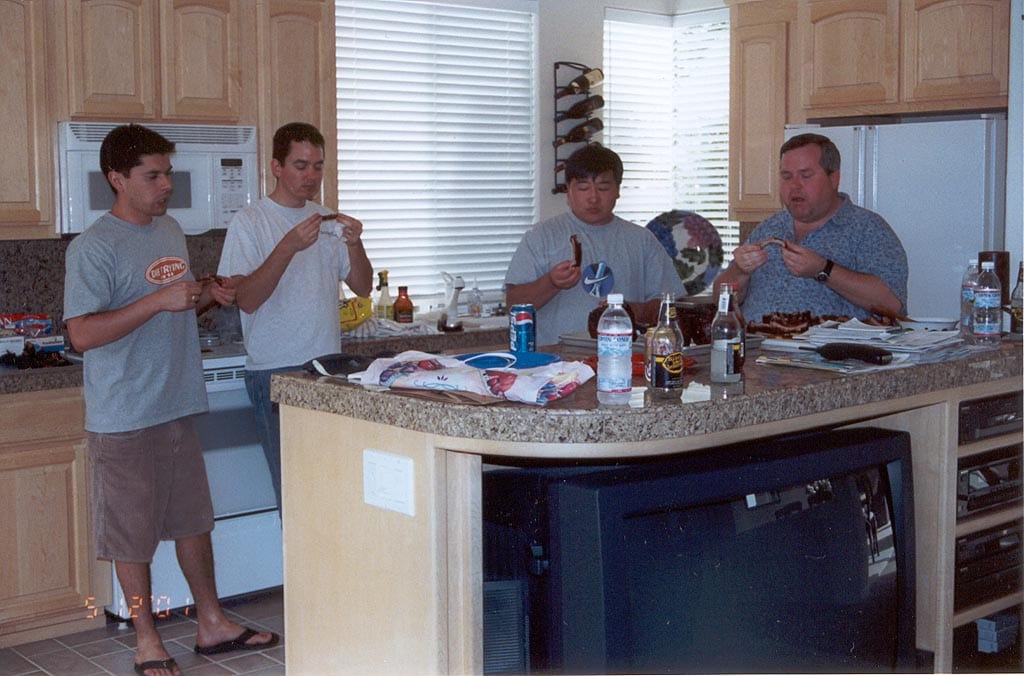 We did the normal routine of turning and basting the ribs at the halfway point of cooking and then again a couple of times after that. I ran my cooker in the 240-250°F range the entire time and ended up having to stir the coals and open all the vents fully to keep my temperature high enough.

Toward the end of four hours, my friends started applying sauce to some of their slabs, and at 3:45pm our first batch was ready for tasting. By this time some of our friends and family had arrived to help us enjoy the fruits of our labor. We cut the slabs into individual bones and did our taste test, discussing the tenderness of the meat, the heat of the rub, flavor, moisture, and smoke penetration.

We repeated the process again at around 4:15pm and 4:45pm, comparing these ribs to the ones that came before. Finally at 5:00pm, my ribs came off the cooker, smoked gently for 5-1/2 hours. 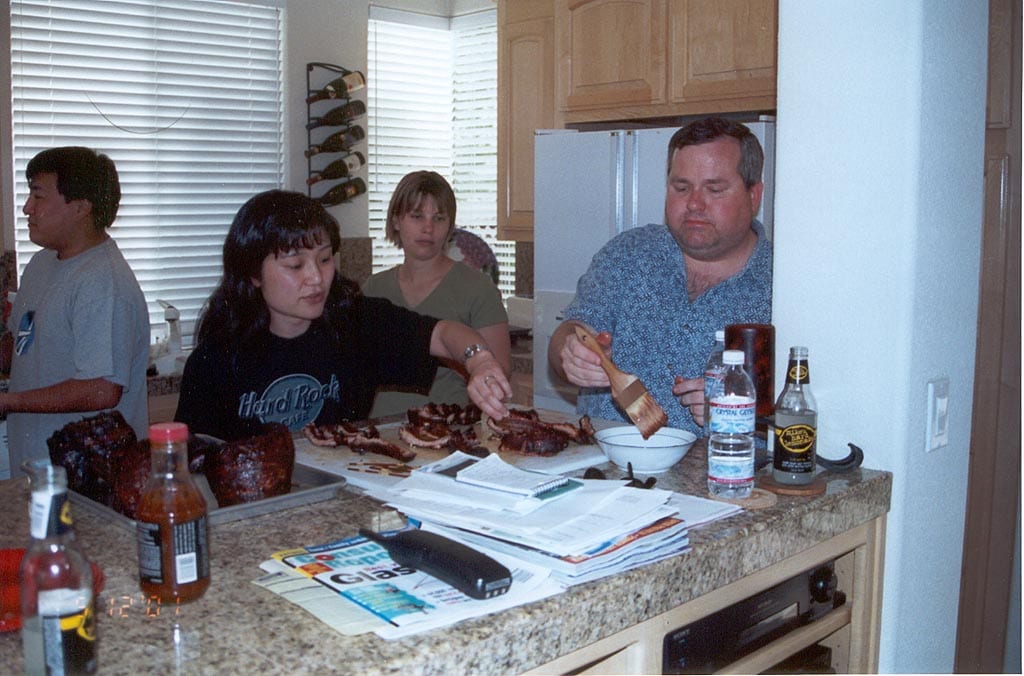 In terms of tenderness, we found that the 5-1/2 hour ribs were the most tender. The meat tore easily when we pulled on two adjacent bones, and it came cleanly off the bones. These ribs had that “almost falling off the bone” tenderness that many people strive for in barbecued pork ribs. The other ribs had good tenderness in your mouth, but the meat would not tear when the “pull test” was applied.

As far as taste goes, we really liked some of the spicier combinations of rub and sauce. We especially liked a rub called Barbecue of the Americas from Penzeys Spices. It’s a tasty combination of kosher salt, Hungarian sweet paprika, Jamaican allspice, cayenne, nutmeg, black pepper, thyme, ginger, white pepper, and Korintje cinnamon.

Personally, I noticed that I preferred some of the ribs that my friends had seasoned more heavily with rub than I would have done myself. As a result, I’ll try using more rub on my ribs in the future.

The Leaning Tower of WSM

So we had a fun day, ate some fantastic ribs, and impressed our friends and family and even ourselves a little bit. What surprised us most was how much we learned about cooking ribs in the process. This happened only because we were able to cook so many ribs in so many different ways and taste them all side by side. It was a valuable experience and I highly recommend it to you and your barbecue friends.

I’ll close this topic with two photos. The first is of the four WSM pitmasters posing proudly at the end of a successful day. Left to right: Chris Allingham, Brian DeHamer, Geoff Hamamoto, and Duncan Engel. 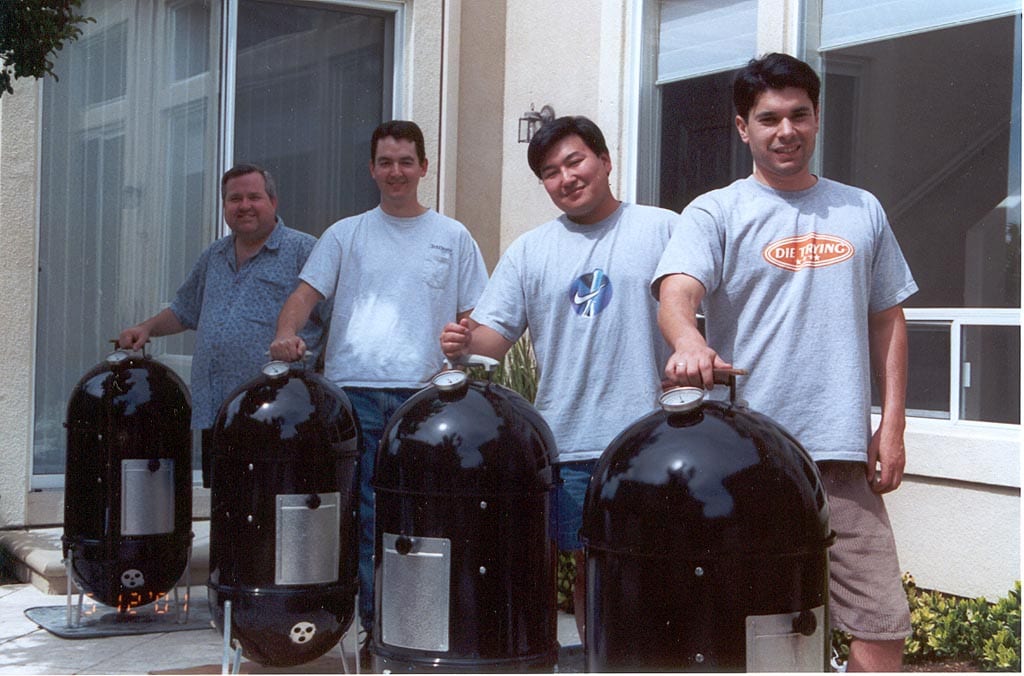 As everyone was packing up to go home, someone got the bright idea to build the world’s tallest Weber Smokey Mountain Cooker. Talk about increased cooking capacity! This sucker needed guy wires for support! Fortunately it didn’t collapse and no Weber Bullets or pitmasters were harmed in the process of taking this photo. 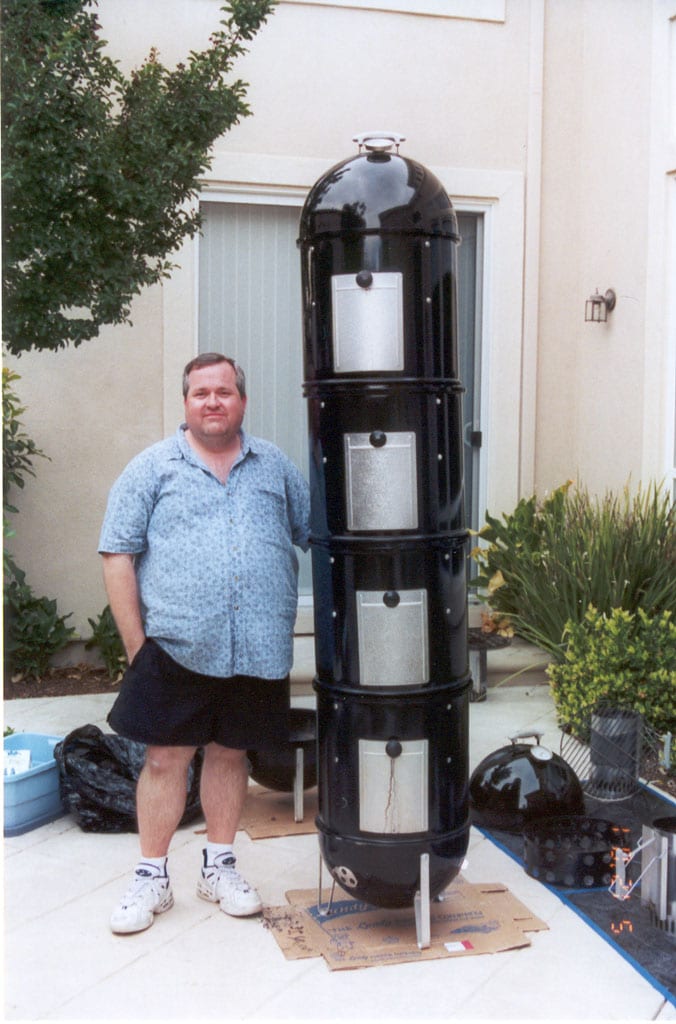 It was a very memorable day, and I hope that someday you will enjoy a similar experience with your friends, too.