“Over the course of human history, salt has added much more than flavor. Its ability to preserve foods and sustain civilizations through cold winters has sent countries on desperate searches to find it, control it, tax it, and trade it. In some parts of the world, salt was minted into coins as valuable as gold and soldiers were paid in salt (hence the terms ‘salary’ and ‘worth his salt’). Today, salt is far more common that it used to be, but not every type is the same.”

Salt is a mineral. Chemically, it is known as sodium chloride (NaCl), the combination of one sodium ion and one chloride ion. Salt is 40% sodium and 60% chloride by weight.

Salt enhances the flavor of food, preserves food, helps to regulate and control normal body functions, and acts as a building block for more complex chemicals.

Interestingly, salt is the only rock eaten by humans.

Where Does Salt Come From?

Salt is primarily found underground in rock form or dissolved in the world’s oceans and some lakes. Salt is also found on the surface of ancient evaporated seabeds like the Bonneville Salt Flats in Utah and in Death Valley National Park in California.

How Is Salt Produced?

In rock salt mining, salt is mined from large underground deposits called beds or domes. It is crushed into manageable chunks and hauled to the surface, where it is screened, bagged, and shipped for further processing into commercial products and food-grade salt.

Solar evaporation is the oldest method of salt production known to man. Seawater is captured in shallow ponds and allowed to evaporate by sun and wind. According to the Wikipedia, seawater contains on average 3.5% salt by weight.

If you’ve ever flown into San Francisco and looked out the airplane window to see a series of colorful ponds along the edge of San Francisco Bay, those are salt evaporation ponds belonging to Cargill Salt, the world’s largest marketer of salt. These ponds have been producing salt for more than a century. Their colors range from pale green to deep pink, caused by micro-algae that change their hue in response to increasing salinity.

Cargill’s solar evaporation process takes five years to complete. During that time, salty bay water is transferred into progressively saltier ponds and finally into crystallizer beds. There the brine becomes so concentrated that salt crystals drop to the bottom, forming a hard salt layer 12 inches thick. This “solar salt” is scraped up by machine and trucked to a wash house where it is rinsed with a brine solution. Since the brine solution is very salty, the salt crystal do not melt when rinsed. The rinsed salt is transferred to large outdoor storage stacks until ready for further processing. This “raw salt” is about 99.5% pure sodium chloride.

Much of the raw salt is processed for use in agriculture, industry, and water conditioning. Cargill re-washes the raw salt to remove dust that may have collected while in the outdoor storage stack. It is then dried and sterilized in a gas-fired dryer to a temperature of 250°F. The resulting salt is 99.8% pure. It is shaken through a series of screens to sort the salt by size and packaged according to coarseness.

For home use and commercial food producers, Cargill takes raw salt from the outdoor storage stack and refines it using a vacuum evaporation process (described below). The result is salt that is 99.99% pure sodium chloride.

Vacuum evaporation is the process of dissolving rock salt or solar salt in water to create a brine solution, then boiling off the water to leave behind pure salt.

Cargill dissolves raw solar salt in pure drinking water, removing dust and some trace minerals that cling to the salt crystals. The resulting brine is pumped into a vacuum evaporator—essentially a large vessel from which the air is removed—and it is boiled. Since water boils at a lower temperature in a vacuum, less energy is needed to evaporate the water than if an open-air vessel was used. Once most of the water has boiled away, the remaining salt slurry is dried, filtered, and air-cooled. A series of vibrating screen sort the salt crystals by size for packaging.

Solution mining is the process of injecting water into underground salt layers and pumping out the resulting brine solution and processing it via vacuum evaporation. Solution mining is more commonly used by chemical companies in the production of chlorine, an important industrial chemical.

Table salt is a fine-grained salt produce from either rock salt or sea salt like that produced in Cargill’s evaporation ponds. Iodized table salt contains a small amount of potassium iodide and dextrose (a sugar used to stabilize the iodide) as a dietary supplement to prevent goiter and mental retardation. Plain table salt does not contain potassium iodide and dextrose. All table salt contains an anti-caking agent like calcium silicate to keep it from clumping in humid conditions so it flows freely from the box.

Kosher salt is a coarse, flaky salt. It is not iodized, and depending on the brand it may or may not contain an anti-caking agent like Yellow Prussiate of Soda (sodium ferrocyanide).

Kosher salt gets its name from its use in making meat kosher in accordance with Jewish dietary laws. Many chefs prefer to use kosher salt in their kitchens because it is easily picked up with the fingers and sprinkled over food with good control.

Some brands of canning and pickling salt use an alternative anti-caking agent, Yellow Prussiate of Soda (sodium ferrocyanide). It is water soluble and doesn’t cause the aesthetic problems of calcium silicate. Brands that contain no anti-caking agent may clump in humid conditions and therefore not flow freely from the box.

Gourmet sea salts vary based on how they are harvested and the extent to which they are refined. Some coarse or fine sea salts are about the same in composition as regular table salt, containing 99% sodium chloride and 1-2% magnesium and calcium chlorides and other trace minerals. Varieties like sel gris (“gray salt”) are a moist salt that is not refined, so it contains clay and other trace elements from the evaporation ponds. The most premium of all sea salts, fleur de sel (“the flower of salt”), consists of delicate crystals skimmed from the surface of the evaporation pond by hand. Gourmet sea salts sell for $20-$50 per pound or more.

Gourmet mined salt like RealSalt from Redmond, Utah, is mined rock salt that is crushed, screened, and packaged. It is not refined and contains many trace minerals that give it a pinkish color and unique flavor.

Popcorn salt is super-fine salt that sticks well to popcorn, french fries, or other snacks. It is usually not iodized and contains an anti-caking agent.

Pretzel salt is a large-grained mined salt. It has the unique characteristic of breaking into flat, rectangular-shaped grains when crushed.

Seasoned salt is an example of a complex flavored salt, the most famous of which is Lawry’s Seasoned Salt containing salt, sugar, paprika, turmeric, onion, garlic, and other spices.

Lite salt is a 50/50 blend of table salt and potassium chloride. It usually contains potassium iodide and an anti-caking agent. Lite salt is used by people who wish to reduce their sodium intake for health reasons.

Rock salt consists of large, chunky crystals and is generally not considered to be food grade salt. It is commonly sprinkled over the ice in a homemade ice cream maker. The rock salt causes the temperature of the brine mixture to drop below 32°F, allowing the ice cream to freeze. It can also be sprinkled over ice in a cooler to cool beverages quickly.

The three types of salt commonly used in barbecue cooking are table salt, kosher salt, and canning and pickling salt.

Expensive gourmet salts have no place in barbecue cooking. Using these in a rub or in a brine solution is a waste of money. With their delicate, crunchy texture and unique flavor, these should be used as a “finishing salt” applied to a perfectly cooked steak or fish, raw seafood, and vegetables.

Table salt or kosher salt is most commonly used. You may wish to use plain table salt, as some people believe that iodized salt creates an off-taste or discoloration in the finished meat. In my opinion, I don’t think you’ll taste a difference in your finished barbecue if you use iodized salt, but you can judge that for yourself.

Use table salt in a rub if you want uniform distribution and even sprinkling when combined with other finely ground ingredients. If uniformity is not a consideration, or for rubs that are coarse, use kosher salt.

When dissolved in liquid, any salt will do. Table salt and kosher salt are most commonly used, but canning and pickling salt is fine, too. Again, some folks will avoid iodized table salt, but when diluted in a gallon or two of water, it’s not clear this has any affect on flavor.

Make sure to follow the Salt Equivalent Measures described below when using table salt or kosher salt in brine solutions.

Using Salt In Other Cooking

The photo below shows equivalent amounts of table salt and the two most popular brands of kosher salt. 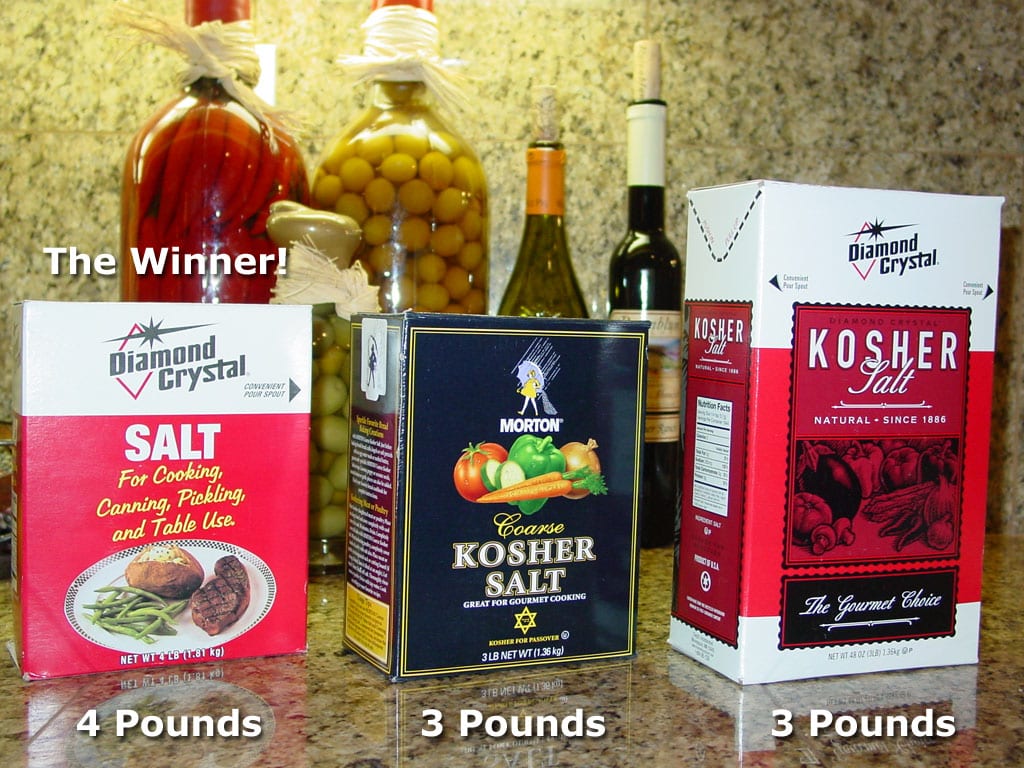 Which box contains the most salt by weight? Not the biggest box!

What if you’re using something other than Morton Kosher or Diamond Crystal Kosher salt? Regardless of the type of salt—sea salt, canning and pickling salt, or any other brand of kosher salt—just measure 10 ounces of it on a kitchen scale, and you will have the equivalent of 1 cup of table salt.