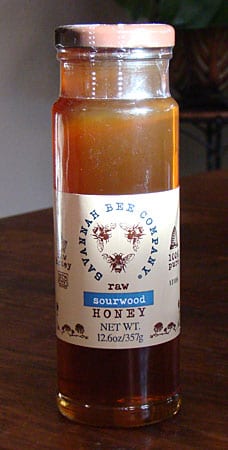 Honey is a wonderful product that is often used in sauces, brines, and other barbecue recipes. What’s even more wonderful and fascinating is the way in which bees produce honey.

Foraging bees seek out flowers in bloom and suck the flower’s nectar into special cavities inside their bodies. There the nectar is mixed with enzymes that convert sucrose into fructose or glucose, which are more highly concentrated in solution than sucrose.

The nectar is deposited in the hive, where hundreds of bees beat their wings furiously to circulate air over the nectar, reducing its moisture content. The nectar becomes honey when the moisture content is down in the 14-20 percent range. The honey is then stored as food for the hive.

It is estimated that bees must collectively visit up to two million individual flowers and travel many thousands of miles to produce just a single pound of honey.

Colony Collapse Disorder (CCD) is a phenomenon that became widely publicized starting in 2006 when entire colonies of worker bees vanished for no apparent reason. This has a significant impact on agricultural crops that must be pollinated by bees.

Several causes of CCD have been proposed, including use of certain pesticides, infections, pathogens, bee nutrition, genetic factors, immunodeficiencies, loss of habitat, beekeeping practices, or a combination of these factors.

The honey we commonly buy in the supermarket is often a heated, filtered blend of several types of honey. It has a nice golden color, but is not very complex in aroma or flavor. If you’re looking for something really special, seek out “single-flower” honeys created from the nectar of a single flower type. The sourwood honey used in the Best Ribs in the Universe recipe is a single-flower honey.

A bee characteristic known as “flower fidelity” causes bees to visit only one type of flower, skipping over others, as they single-mindedly collect nectar. This results in an amazing assortment of single-flower honeys, each with its own unique personality. Beekeepers take advantage of flower fidelity by moving their hives to follow the season and location of certain flowers, thus producing some very rare and spectacular honeys. Flower fidelity is also important to the fertilization of the flowers, as the bee transports pollen within the species as it moves from flower to flower.

The color of single-flower honeys can range from almost clear (acacia honey) to dark brown (buckwheat honey). Lighter colors usually have a more subtle flavor, while darker varieties tend to have greater intensity. Texture can range from thin to thick to clumpy to almost granular. There are as many as 3,000 different varieties available…almost as many varieties as there are flowers in the world.

Single-flower honey is sold in several forms. Most common is liquid, where the honey has been extracted from the comb. It is also sold in the comb, or as liquid and small comb pieces mixed together. “Cream”, “spun”, or “whipped” honey is the result of a specially controlled process of crystallization. This makes the honey lighter, thicker, and spreadable.

One common misconception about honey is that when it gets cloudy and crystallizes, it has gone bad. This is not true—in fact, all honey will crystallize over time. The rate of crystallization is determined by the makeup of the nectar. Some honeys will crystallize in just a few days, while others will remain liquid for years. If honey begins to crystallize, it can be liquefied by placing the container in hot water for about 15 minutes.

Crystallization occurs faster at low temperatures, so it’s better to store honey at room temperature rather than to refrigerate it. It should be tightly capped to keep the honey from absorbing moisture in the air—if too much moisture is absorbed, yeasts can begin to grow.

You can learn more about honey by visiting the National Honey Board website. You can also use their honey locator to find single-flower honey sources near you.

From the National Honey Board.

For best results, use recipes developed for using honey. When substituting honey for granulated sugar in recipes, begin by replacing half of the sugar with honey. With experimentation, honey can be substituted for all the sugar in some recipes.

When substituting honey for sugar in baked goods:

For easy measuring, spray your measuring cup or measuring spoon with cooking spray before adding honey.

Honey should not be fed to infants under one year of age. Honey is a safe and wholesome food for older children and adults.

It’s best to consume honey within one year after opening the container. Honey darkens with age but retains its flavor.