I’ve watched some of those barbecue competition shows on television and noticed that some pitmasters cook pork butts in disposable foil pans. Often times the pitmaster has a big stick burning smoker with lots of shelf space, and they move pork butts in and out of the cooker with ease using foil pans.

This got me to wondering if I could use foil pans in the Weber Smokey Mountain Cooker and if there would be any benefits. I gave it a try for the first time in May 2016 and the results weren’t that great. Each butt sat directly on the bottom of the pan and the lower part of each butt braising in its own juices during cooking. The result was that the bottom 25% of each butt looked and tasted more like braised pork than barbecue pork—not exactly what I was looking for.

In December 2017, I tried it again, but this time using wire racks to elevate each pork butt out of its cooking liquid. This resulted in better color and texture on the bottom 25% of each butt, but it still left the actual bottom surface lighter in color than the rest of the meat. I guess that’s the price you pay when using a foil pan.

There were some benefits of cooking pork butts in foil pans:

But on the negative side:

In any event, using foil pans was something interesting to try and you may want to try it for yourself. It’s a technique rather than a recipe, so you can take any pork butt using any rub/injection and drop it into a foil pan on top of a small wire rack and see if you like the results.

Here are some photos I took on December 10, 2017 when I cooked two pork butts on wire racks in disposable foil pans in my 18.5″ Weber Smokey Mountain Cooker.

This video highlights some of the steps of smoking pork butts in foil pans described in this article. 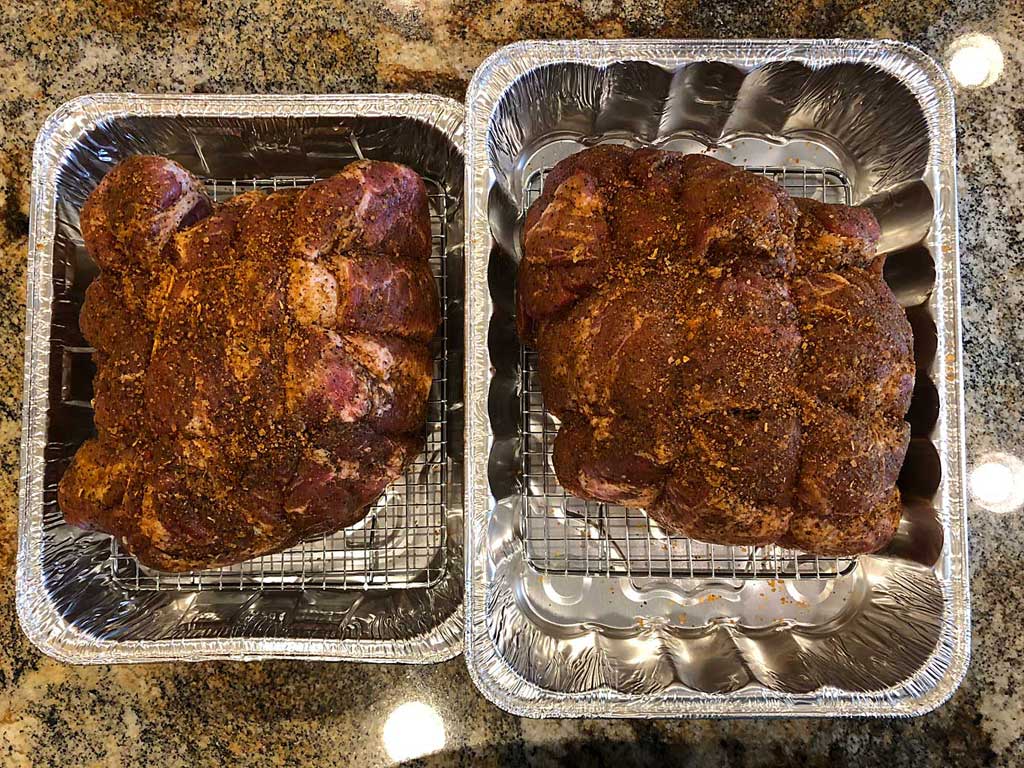 You’ll find lots of different sizes of disposable foil pans at the supermarket. Make sure to buy pans that fit on the top and bottom cooking grates of your WSM, and for the top grate, a pan that fits with the cooker lid in place.

Here are the top and bottom grate dimensions for each of the WSMs. Take a measuring tape to the supermarket, you’re looking for foil pans with a diagonal dimension a few inches less than these measurements.

In the photo above, you can see that I used two different sized pans for these similarly sized pork butts. This wasn’t strategic; I just happened to have two mismatched pans and used what was on-hand. You don’t need to buy overly large pans, just buy something that fits both the pork butt and your WSM. 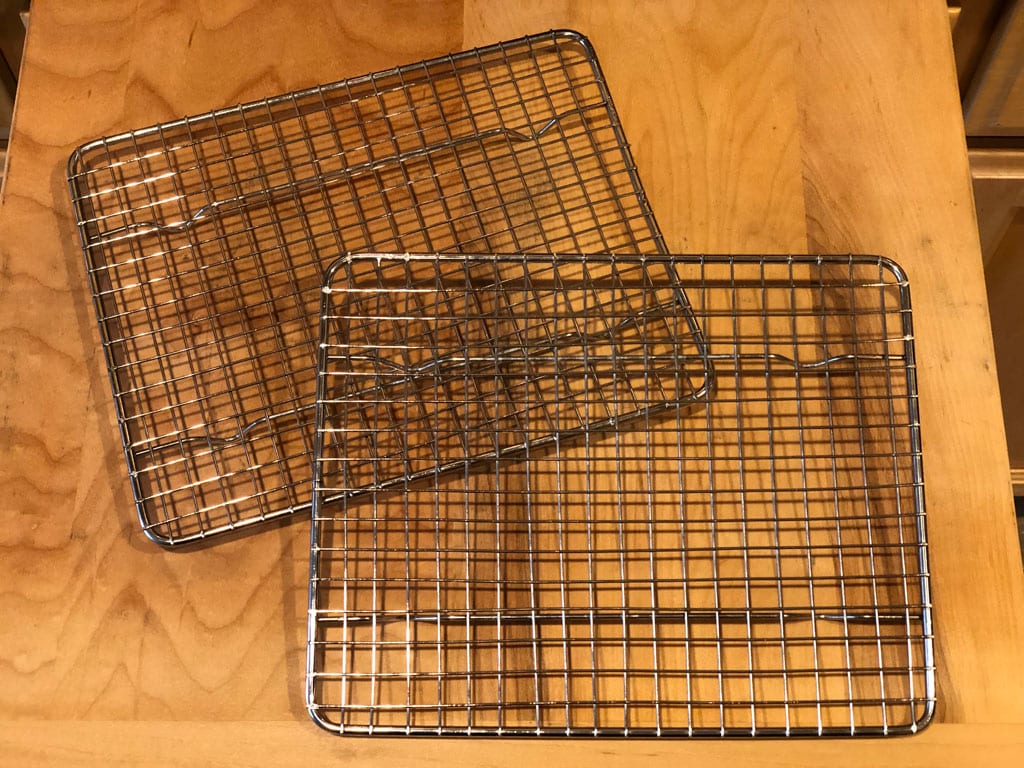 Buy a couple of small wire cooling racks that fit both the pork butts and the foil pans. The racks shown here measure 8″ x 10″ and fit a 1/4 rimmed baking sheet pan. 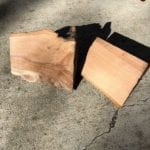 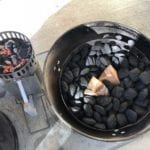 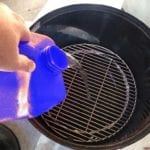 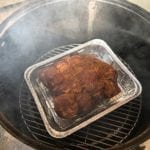 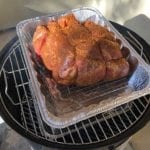 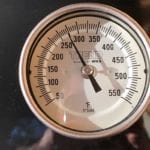 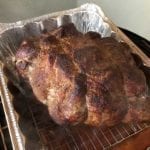 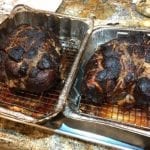 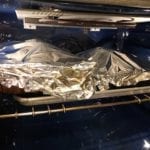 Purchase two pork butts, trim and season them as you like, and place each in a foil pan on top of the wire cooling rack. You can use bone-in or boneless butts, you can slather or inject and rub with whatever concoction you like. You can barbecue these butts “low & slow” or “hot & fast”. At this point, it doesn’t really matter, this is about the technique of using the foil pan, not the particulars of the pork butt preparation and cooking. I’d suggest that you take whatever recipe and cooking method you like for pork butt and just add the foil pan and rack into the process and see how you like it.

For the two butts shown here, I used boneless butts weighing about 8 pounds each, trimmed most of the exterior fat according to the instructions in the Pork Butt Selection & Preparation article, tied with kitchen twine, and rubbed with Big Poppa Smokers Money Championship Rub. I refrigerated the butts overnight, then lightly re-rubed the meat again before placing it in the WSM.

I fired the WSM using the Minion Method, filling the charcoal chamber to the top with unlit Kingsford Charcoal Briquets, nestling two large chunks of dry apple smoke wood into the unlit charcoal, then lighting 30 briquettes using a Weber chimney starter and spreading them over the unlit briquettes. I assembled the cooker and filled the water pan from above immediately with hot tap water, then placed the foil pans onto each of the cooking grates.

I cooked the butts at 250-275°F until the internal meat temperature measured about 160°F with an instant-read thermometer, checking in 3-4 spots and averaging the results. Along the way, I used a spray bottle to spritz the meat with Martinelli’s Premium Apple Juice once the crust was set about 3-1/2 hours into the cook and about every hour thereafter. 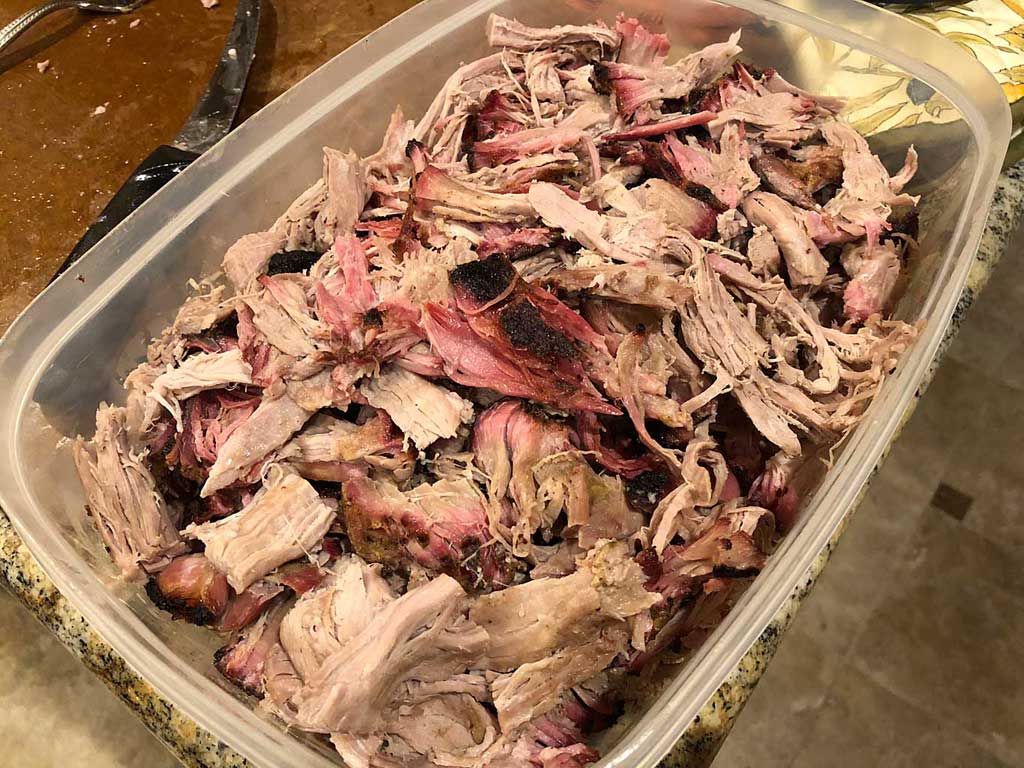 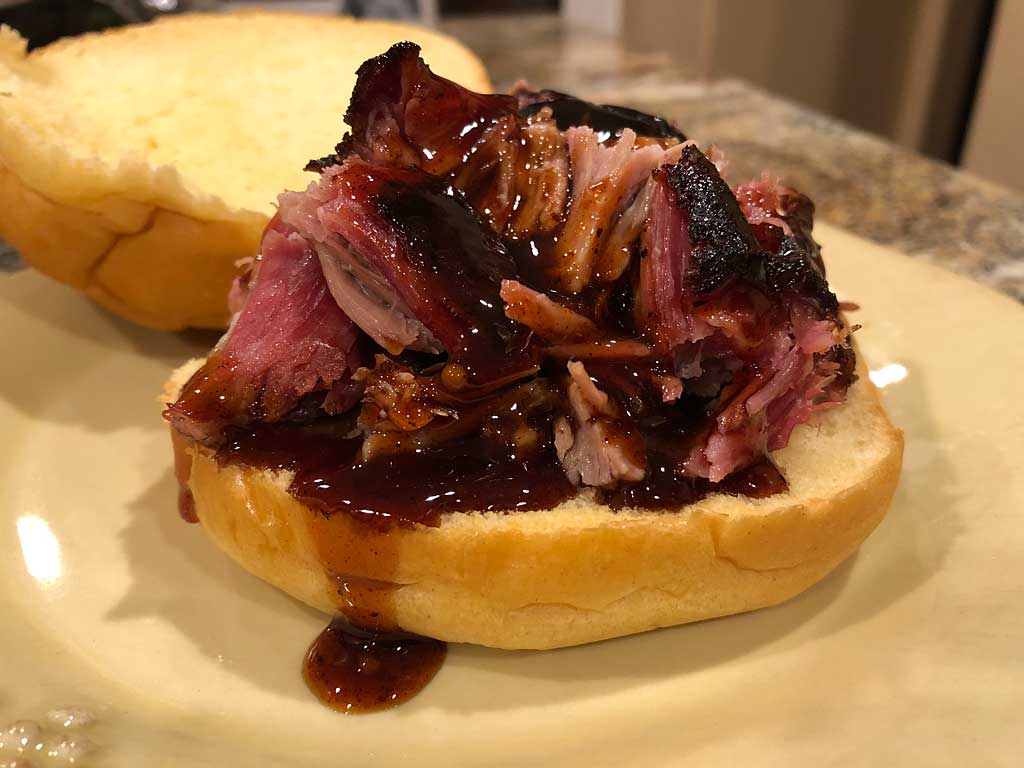 As an optional step, you can pour the pork drippings from the foil pan into a fat separator and use the defatted au jus to moisten the pulled pork before serving.